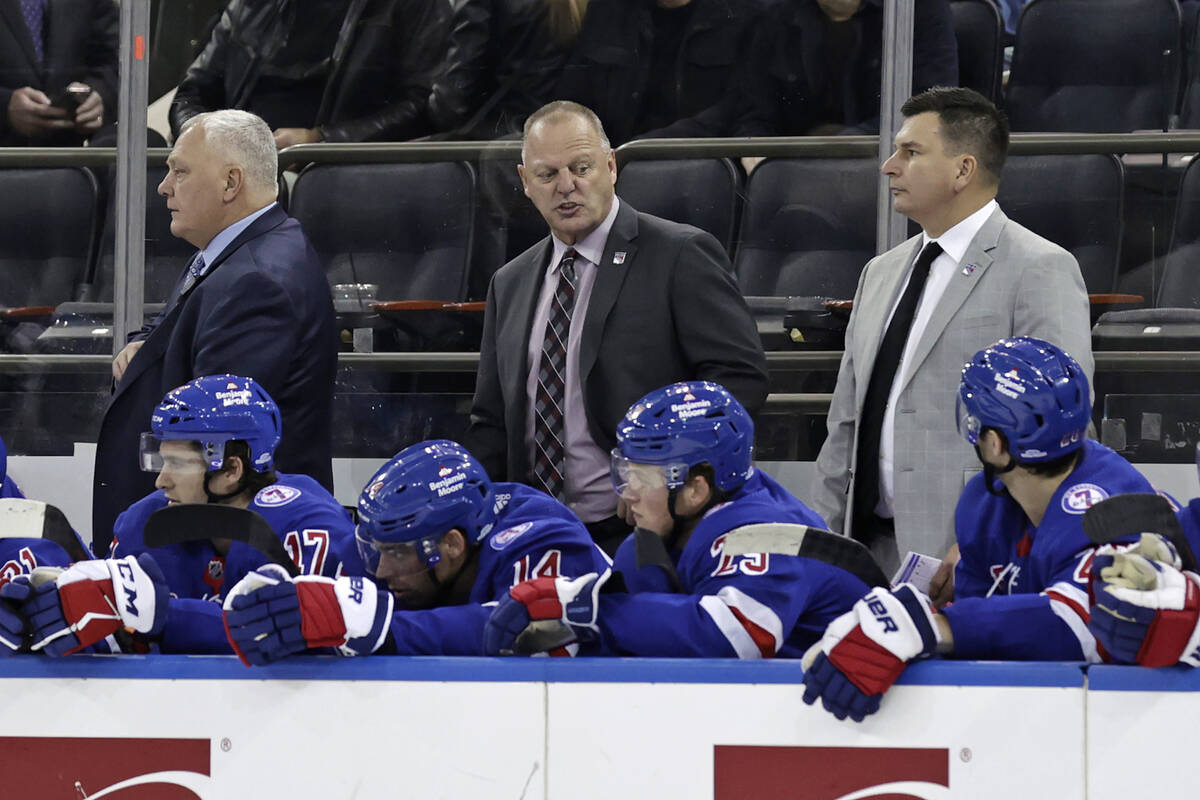 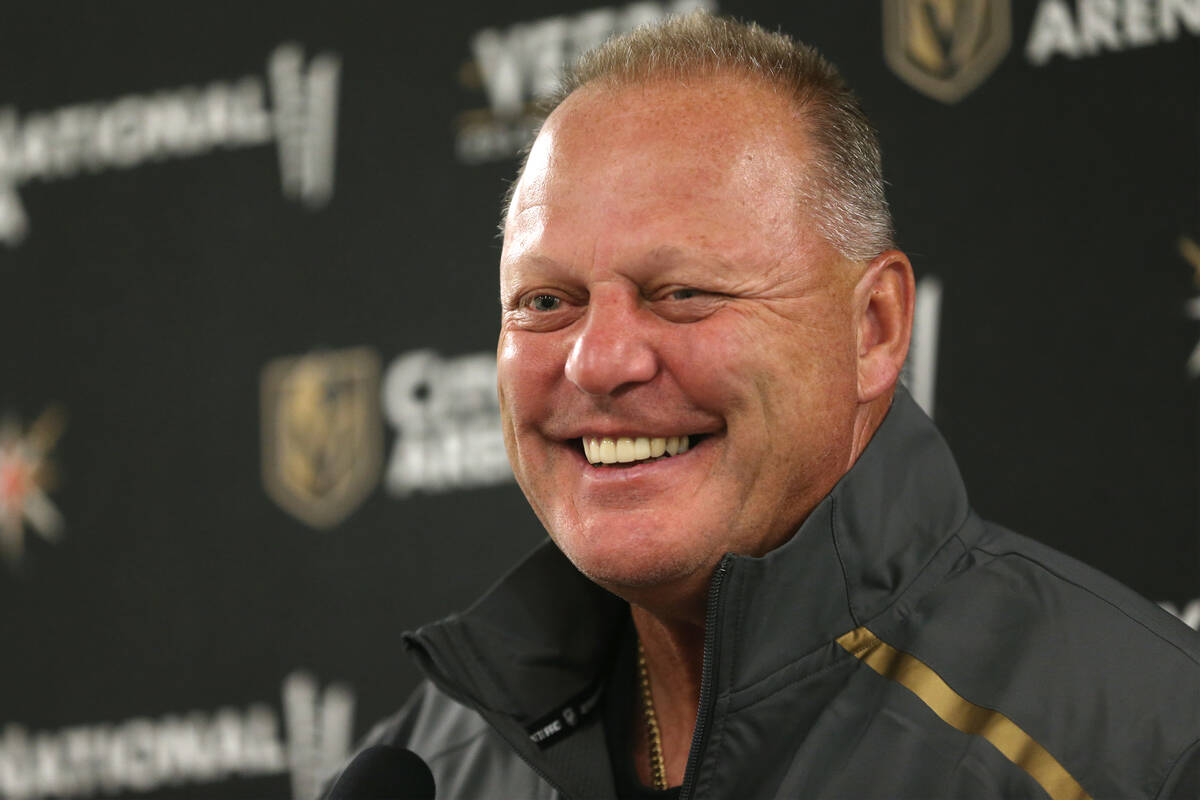 TARRYTOWN, N.Y. — He has come to this small village located on the eastern bank of the Hudson River, where Mark Twain and J.D. Salinger once penned their brilliance, to continue chasing his dream of winning a Stanley Cup.

Each game day, Gerard Gallant and his staff make their way through the winding wooded areas hugged by the sun-splashed water. The drive covers about an hour into midtown Manhattan and toward Madison Square Garden, where the former Golden Knights coach now leads the New York Rangers.

What he has found is a home about as picturesque as his beloved Prince Edward Island in Canada’s maritime provinces as he could have hoped and, well, his next opportunity.

Eight active NHL coaches have directed teams for more than 500 games and not won it all. Gallant is one.

He was the first coach in Golden Knights history, guiding an expansion team to the Stanley Cup Final in the 2017-18 season. He would compile a 118-75-20 record and another playoff appearance before his tenure came to a sudden and unexpected end.

Gallant was fired in January 2020, the team sitting tied for the second wild-card playoff spot. He later denied the move was because of philosophical differences between himself and management.

At the time, general manager Kelly McCrimmon said “our team is capable of more than we have demonstrated this season.” As much as the Knights weren’t living up to what the team analytics suggested they should, help on the blue line for Gallant hadn’t come.

The firing was obviously a combination of several factors.

Pete DeBoer was then immediately hired as Gallant’s replacement.

Shortly after his team’s morning skate Monday — and hours before it handed the Florida Panthers their first regulation loss this season — the 58-year-old Gallant spoke to the Review-Journal about his decision to take the Rangers job and how he viewed — then and now — his dismissal in Las Vegas:

What appealed to you most about coaching the Rangers?

“I was talking with some teams, but I want to win a championship and I believe we have an opportunity to do that here, despite the fact the New York media thinks we have no chance. I’ve been in the league a long time — player, assistant coach, head coach — so you know what New York is all about.

“I just thought it was the most attractive job and a place we could win. I had other interviews. But when this came about and I talked to (president and general manager Chris Drury and owner Jim Dolan) and they made me the offer, I was pretty excited.”

What are your first thoughts when others mention Las Vegas?

“Well, it was unbelievable until the day I got fired. It was awesome. Everything was good. I have a lot of great memories over those 2½ years. Loved every minute of it. I really did. The setup we had there — the practice rink in Summerlin, a 20-minute drive to T-Mobile Arena — was just so easy. It was first class all the way. It was A-1.”

Does what you must believe was unfinished business in Las Vegas still eat at you?

“I’ve put it by me now, but I was pretty heartbroken when the (firing) occurred. I thought things were going well. It was definitely a surprise. I understand it’s part of our job and business. I had it happen before. But it was definitely a shock. (On a scale of 1-10 for being surprised at the firing) I was a 10. I never saw it coming. Never saw it.

“You know, we had lost four games in a row at the time, so I went into the meeting (with president of hockey operations George McPhee and McCrimmon) expecting maybe a hard conversation about getting things going or something like that. Instead, it was them saying they were going in a different direction. Never saw it coming. To this day, I really have no idea why.”

How long did it take to get over the firing?

“I went back to (Prince Edward Island) and, with COVID, was there 18 months. I probably got over it when I signed with the Rangers (in June), to be honest with you. It was tough, disappointing, knowing what you had in Vegas with that team. You try to move past it. I didn’t watch (the Golden Knights) for a while. It was tough. Too many of my players were there. You want to cheer for them, but you can’t.”

Is there a part of you that will never understand what happened in Las Vegas?

“I love it here in New York, and it’s great, but there will always be a part where I don’t. Look. Pete DeBoer is a great coach, a good person. I know my clown comment about him (during a 2019 playoff series against then-DeBoer coached San Jose ) came up a lot, but Pete and I are fine. There are no issues there.

“If it was simply that they thought Pete DeBoer was the best coach for them, great. Obviously, they had Pete picked out. I assume they had talked to him before my (firing). I don’t know how quickly. I don’t know to this day how long Kelly and George and (Golden Knights owner) Bill Foley had been talking to Pete. Had they talked for weeks? I have no idea.

“I thought about that part for a few weeks, but after that, I sort of got by it. I was fortunate to be home with my grandkids. That was the best part. No doubt, it was tough. And then you watch the All-Star Game (10 days later), in which you’re supposed to be coaching, that was real disappointing.”

What will you feel in Las Vegas when the Rangers visit Jan. 6?

“I really don’t know. A lot of the Misfit players are gone. But there are still some good character people there. Lot of good guys. It will be tough, no doubt. Like I said, it was great for 2½ years. And then all of a sudden, ‘See ya.’”

Who will receive the longer Knights tribute video and louder ovation, you or former Knights player and now Rangers forward Ryan Reaves?

“I know Reavo was a fan favorite. I don’t know if they will put one up on me, but whatever. I’m not worried about that. Reavo is awesome. He did a great job there.”