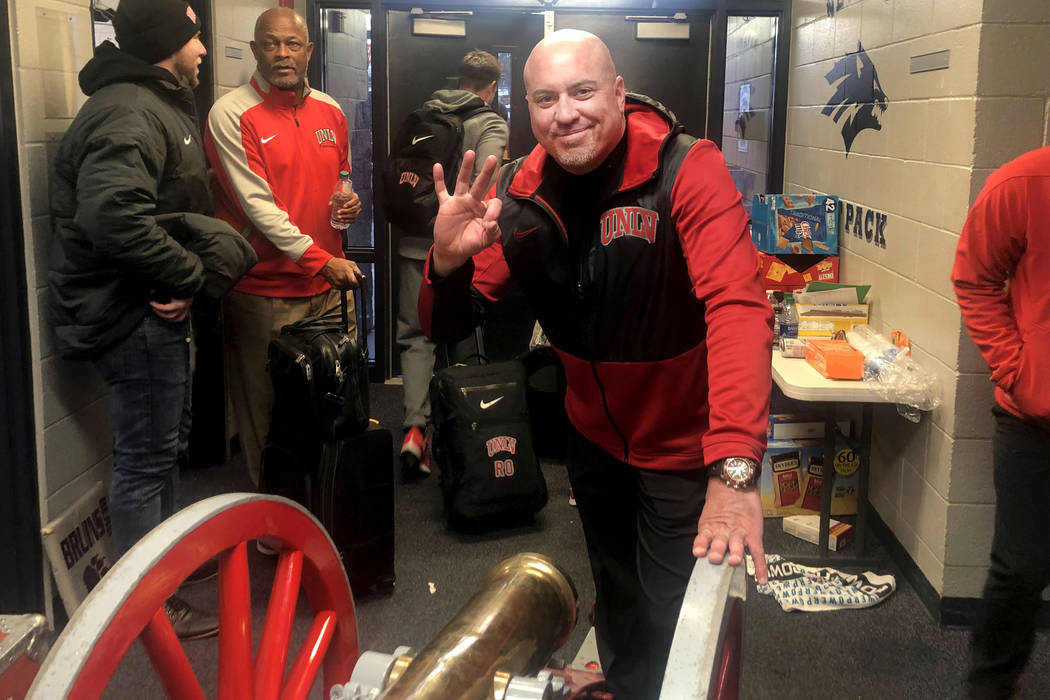 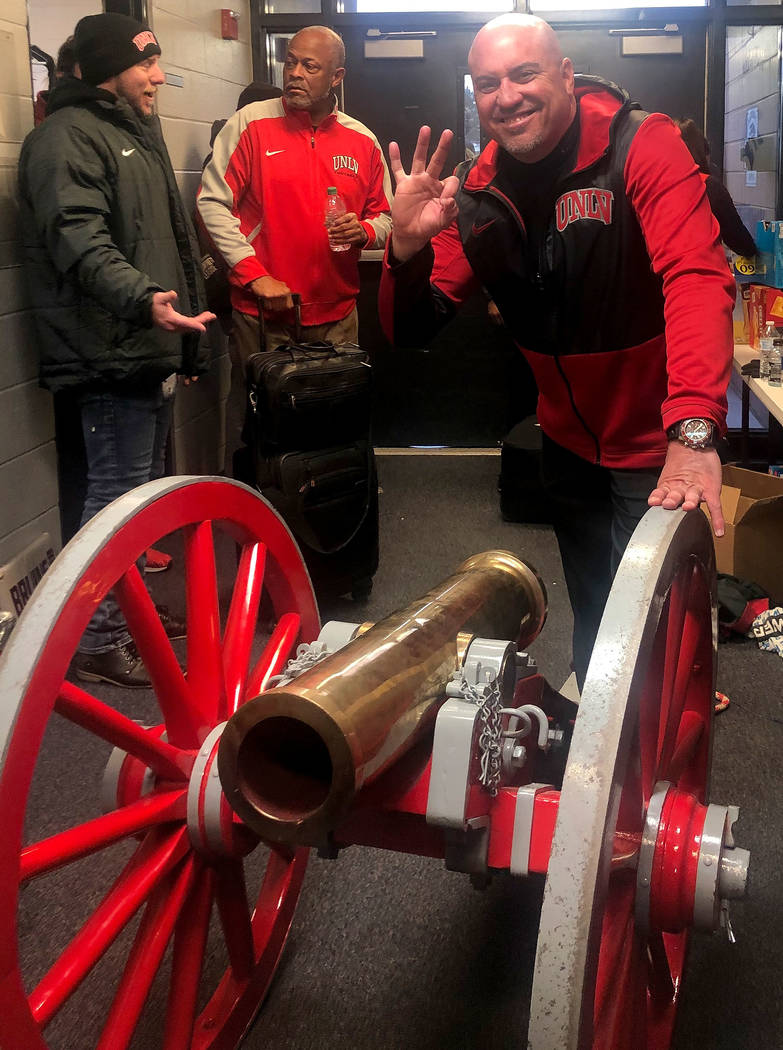 He ran across the rigid turf made even more unforgiving by the bitter cold, his arms raised high in triumph and a smile of joy and closure spread wide.

Tony Sanchez stopped long enough to remove his headset and then exhaled into one of countless hugs to greet him for the next hour or so.

His five-year run as UNLV’s football coach had concluded, and it was some kind of ending, a 33-30 overtime win over rival UNR on Saturday before an announced gathering of 16,683 at Mackay Stadium.

The fools who inhabit the south end zone here haven’t changed much over the decades, and a mixture of alcohol and childish bravado brought an embarrassing finish to what awarded UNLV the Fremont Cannon for the third time under Sanchez.

The teams began a fracas after UNLV’s winning score, and those in the stands made it worse, throwing objects such as full soda bottles that struck multiple people in the head and pulling off the helmet of a UNLV player while leaning over a railing.

Sanchez and his staff were finally able to direct their players toward the locker room, where the man who was hired in 2015 after a successful run at Bishop Gorman High spoke about a tenure that ended when he was fired by athletic director Desiree Reed-Francois.

“I’m proud we didn’t go for the quick fix. We never got nervous. We never worried about pressure or anybody else’s expectations. We knew what was right for the program, and we took the slow, hard process. We didn’t get to finish it out, but there was no quick fix or cutting corners. Unfortunately, the wins weren’t there.”

It’s why he will now focus on his next stop — there already has been interest from Power Five schools and the NFL — and Reed-Francois will continue searching for what will be the school’s fifth coach since 1999.

The end for Sanchez almost occurred last year, when Reed-Francois wanted to make a coaching change after a 50-37 loss at San Jose State in late October.

She was overruled by interim president Marta Meana and with definite influence from Lorenzo Fertitta, whose donations of millions of dollars led to the school’s new state-of-the-art football facility, of which his family’s name adorns.

But the fighting by some closest to Sanchez for his job ended this season when it became apparent the Rebels again would post a losing record and no postseason appearance.

Sanchez finished 20-40, and being just one of three coaches in school history to beat UNR more than twice wasn’t near enough.

“I truly love him,” senior linebacker Javin White said. “I’ll continue to talk to Coach Sanchez for however long I’m living. We played for him today. I’m excited for his new journey and glad I got to live this one with him. He always told us he was built to be in the storm, and he came out of it today.”

There was a trace of water in Sanchez’s eyes afterward, perhaps from the cold weather and perhaps from the magnitude of the moment. He did everything but win at UNLV, setting the program on a path for success more than anyone else who held his position.

“I’m 45 and took one of the worst programs in America and made it better every step of the way,” Sanchez said. “My street cred is pretty good. I’m excited to go work for someone else and help them win and be a good soldier.

This, the lasting image: A game-winning touchdown, his arms raised high in triumph, a smile of joy and closure spread wide.