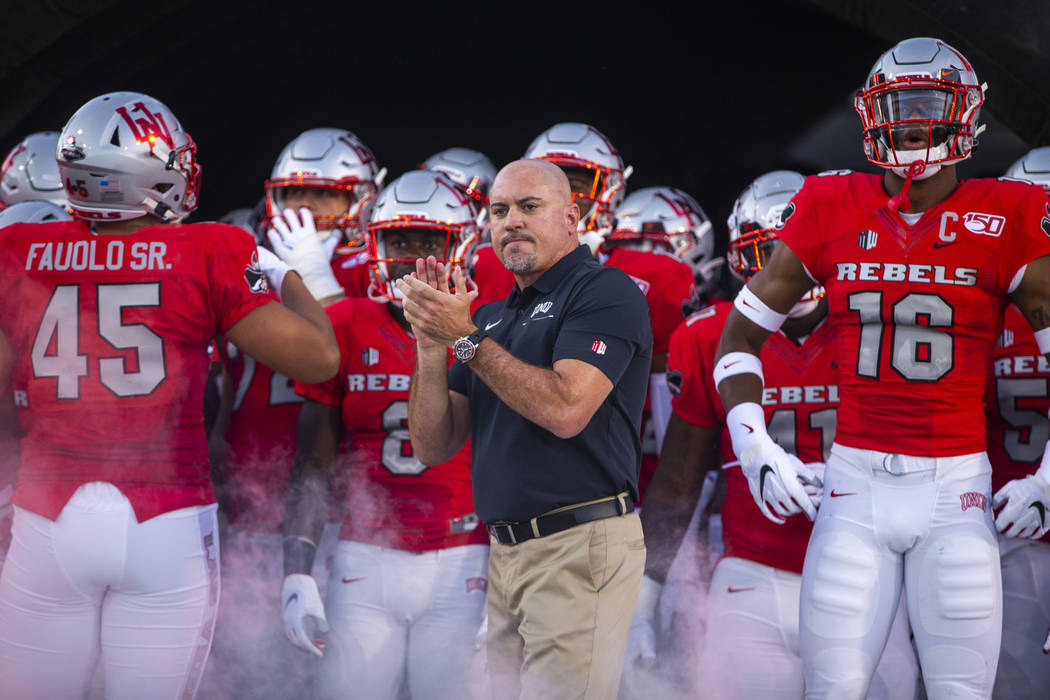 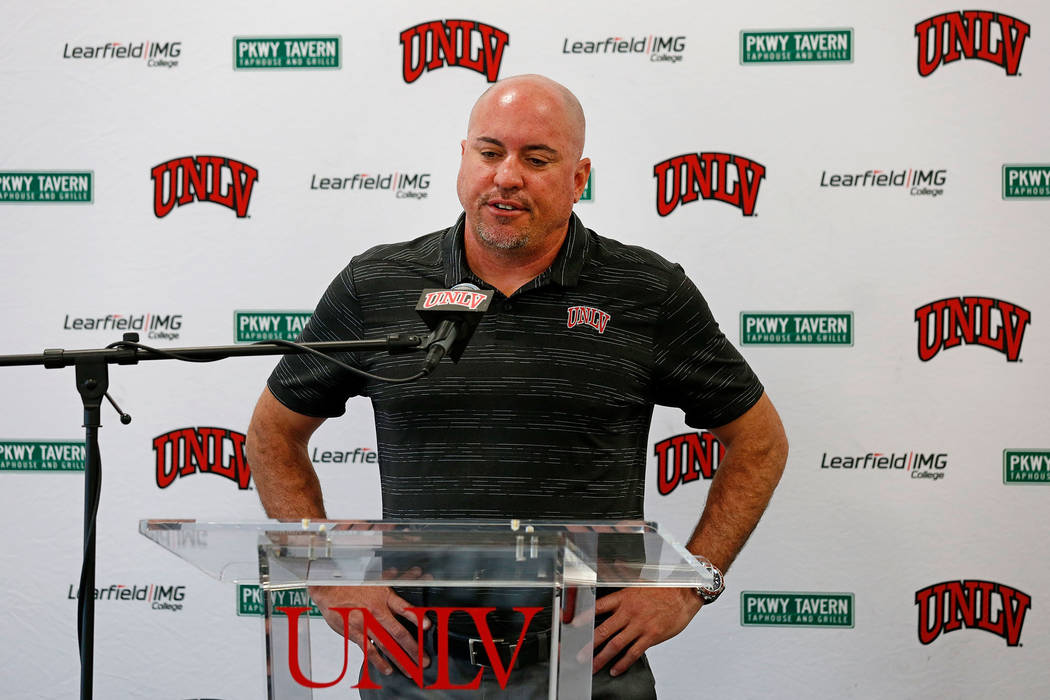 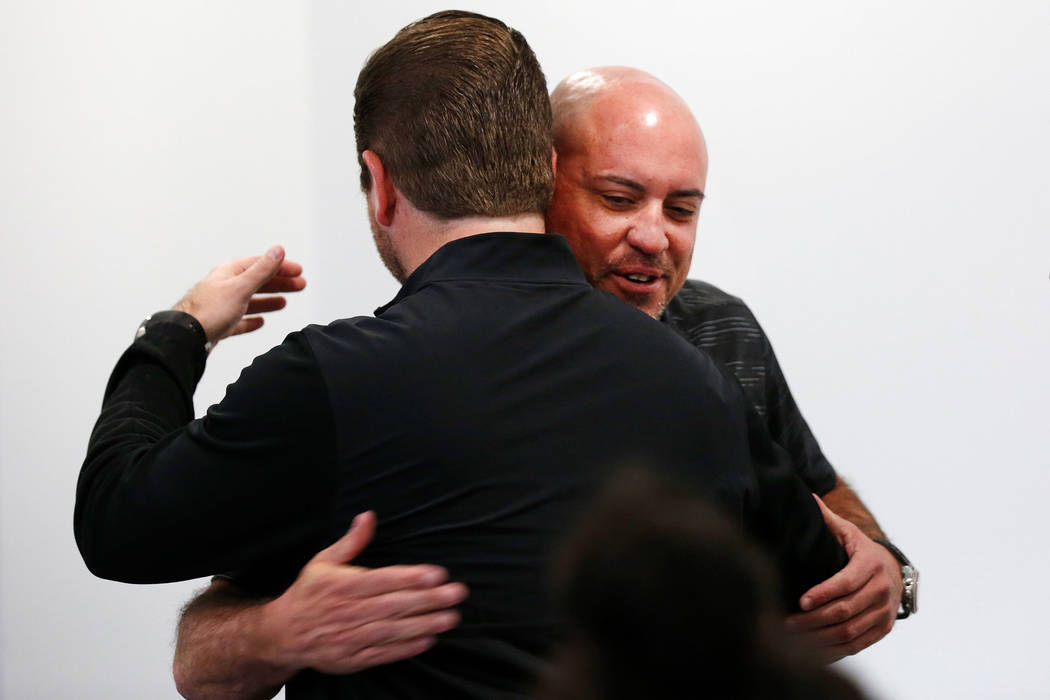 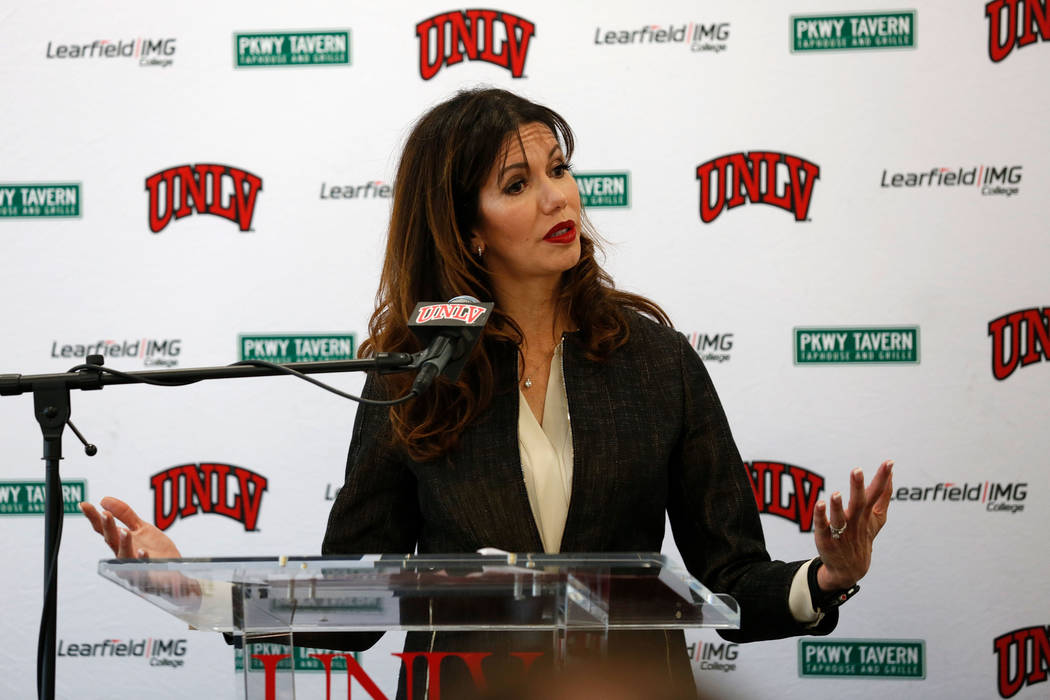 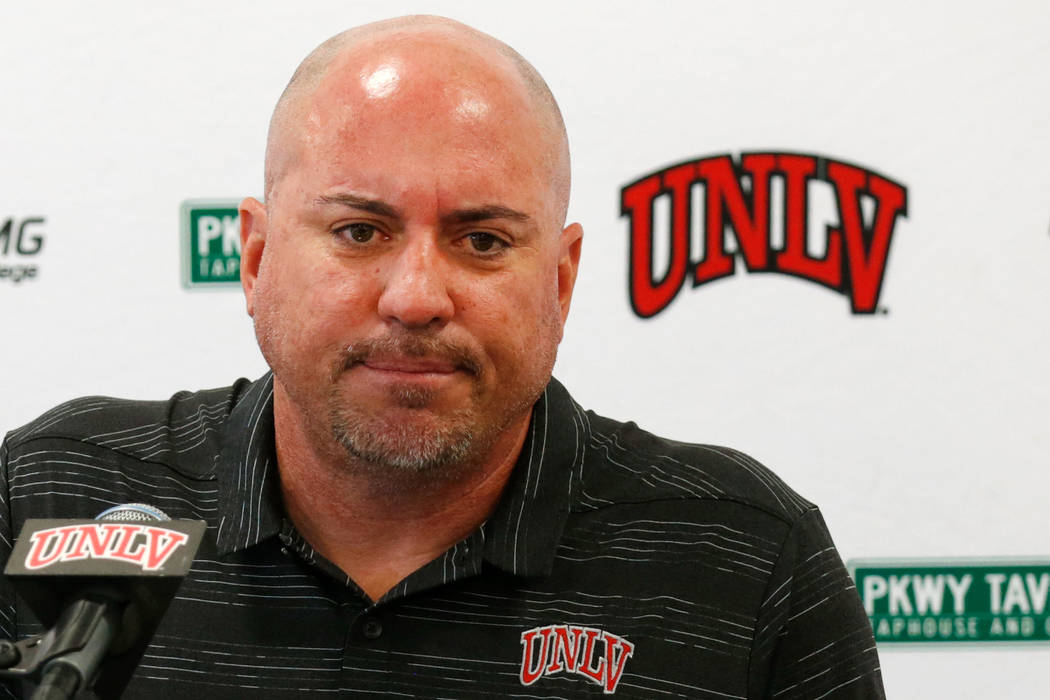 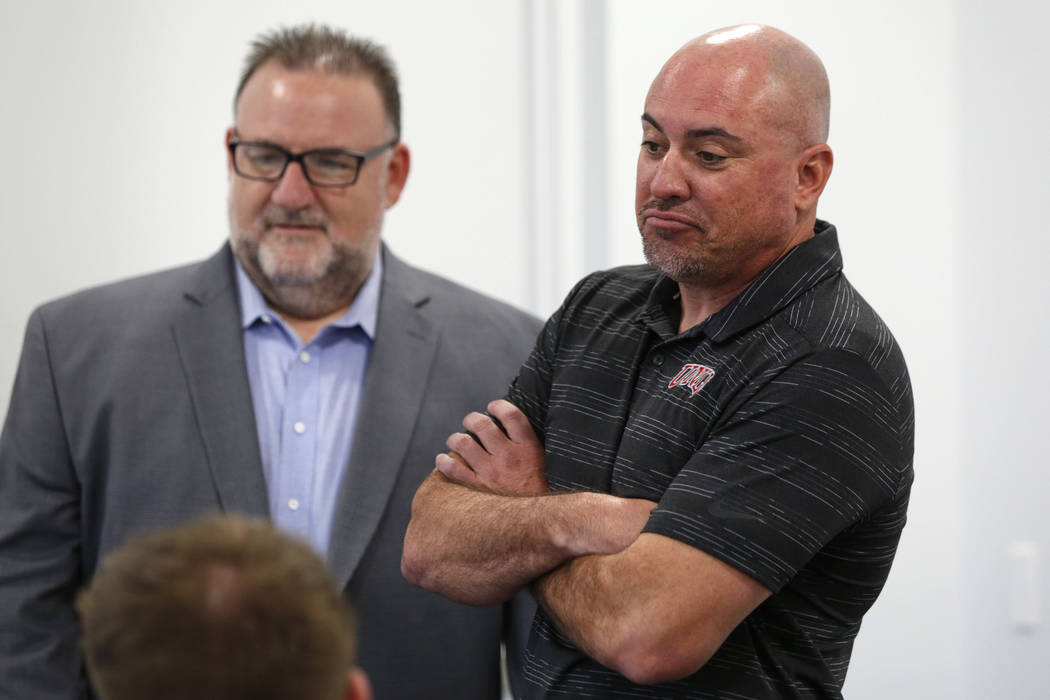 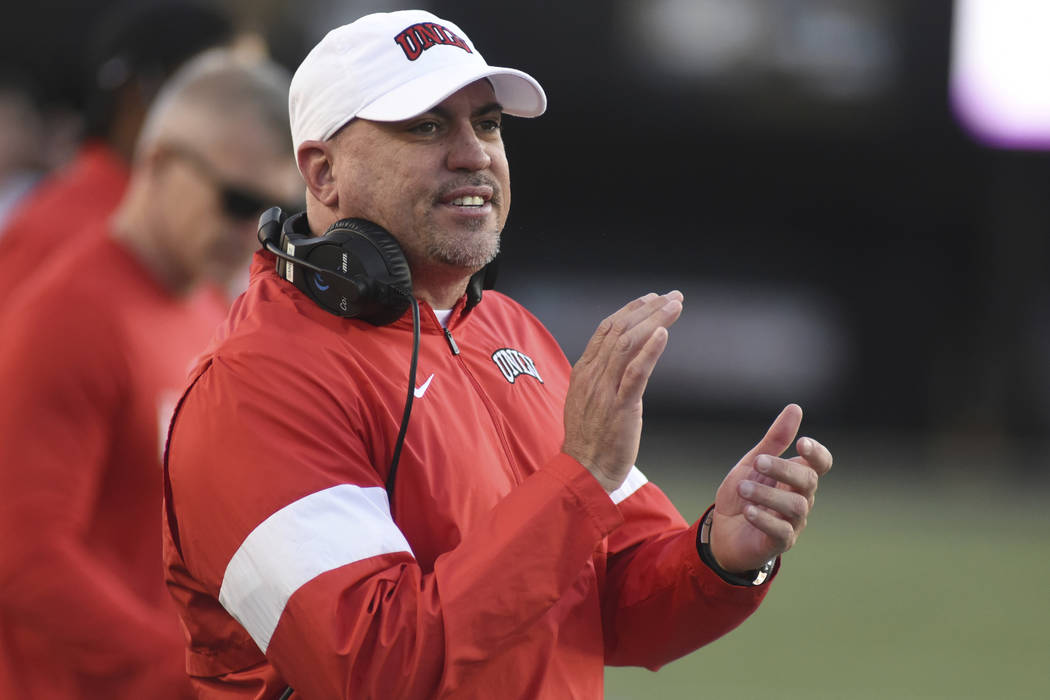 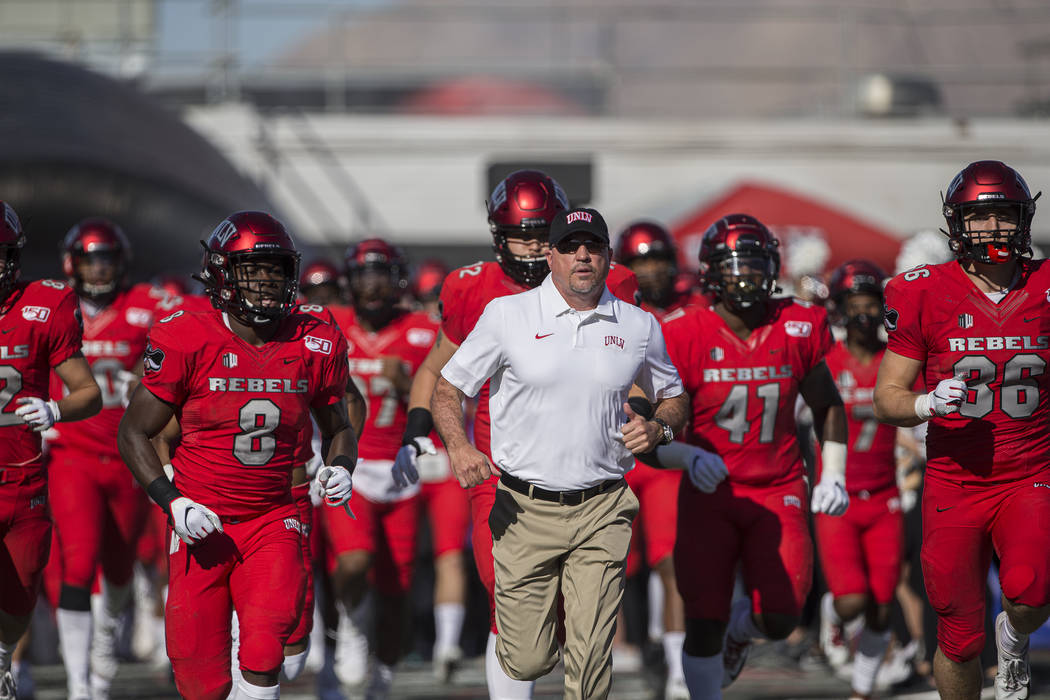 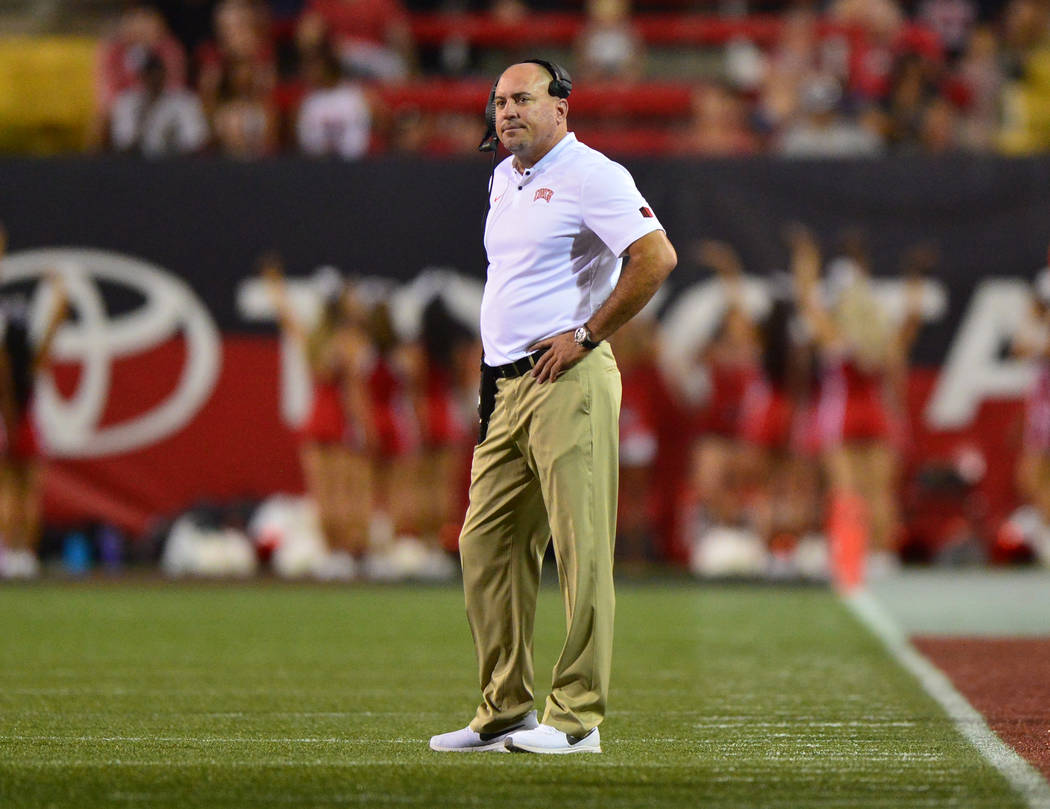 Tony Sanchez, who was the driving force behind the Fertitta Football Complex but didn’t experience nearly as much success on the field, was fired after nearly five seasons.

Athletic director Desiree Reed-Francois fired Sanchez on Friday, but they did not make the decision public before Saturday’s 38-35 victory over San Jose State. They decided an announcement Monday, well before this Saturday’s game at UNR, would be more appropriate.

Sanchez will coach that game.

“I’m disappointed that I’m not going to get a chance to continue on,” said Sanchez, who addressed the media from the Fertitta Football Complex while wearing a UNLV polo shirt. “This is not something I wanted, but in competitive Division I athletics, it’s part of the life.

“So my legacy here? I don’t know. That’s not for me to say. All I know is I showed up to work every day, worked as hard as I could. We made a difference.”

Reed-Francois said she reached the same conclusion as she did in March in letting go of then-men’s basketball coach Marvin Menzies. After surveying the program, she concluded that the win-loss record wouldn’t improve satisfactorily over time.

“It was not a decision that we took lightly,” said Reed-Francois, referring to herself and university acting President Marta Meana. “I recognize that people’s families are impacted, and I recognize the wonderful, positive attributes that coach Sanchez and his staff have brought.

“That was taken into consideration. This (Fertitta) building and the way he galvanized the community, that’s really important. But we had to look at the overall trajectory and where we were going next.”

Reed-Francois will conduct a national search and is expected to spend in the top half of Mountain West salaries, but could adjust the pay to devote more to the staff. The top six in conference salaries begins at the $878,228 annually that San Diego State’s Rocky Long makes, according to USA Today.

“We’re going to be competitive in the Mountain West conference,” Reed-Francois said.

She said UNLV will hire a search firm to handle the background checks, but she and Meana will oversee the actual process. Reed-Francois said she was mindful of the early signing period that is Dec. 18-20, but there would be no timetable.

“We understand the magnitude of this hire, and we’ll be very thorough, methodical and diligent,” she said. “We recognize that some candidates will still be playing, and this may take some time.”

Reed-Francois’ track record suggests she would like to hire a coach building his career, such as Weber State’s Jay Hill or a coordinator at a major college football program.

The new coach will be able to take advantage of the $34.8 million, two-story, 73,000-square-foot complex that Sanchez helped get built. That facility, which opened in mid-October, is seen as a recruiting boon that aids player development with its emphasis on nutrition and training.

Junior Charles Williams said Sanchez was the only coach who recruited him at running back.

“I appreciate him for giving me the opportunity to come play the position I wanted to play,” said Williams, who has rushed for 1,119 yards and 10 touchdowns this season.

Added senior linebacker Javin White, “I’m blessed to have another week with (Sanchez), and I’m excited to go out there and fight for UNLV and fight for this guy (Sanchez) next to me because he’s done so much for me.”

Sanchez did not have a physical complex to help with recruiting until this most recent class, which is ranked third in the Mountain West by the 247Sports’ composite ratings.

“We’re standing in this beautiful Fertitta Football Complex because of the community believing and coming together and giving this university a chance,” Sanchez said. “I truly believe this football complex, the (Allegiant) Stadium coming online, recruiting the way it is, our kids doing all the right things, the cultural dynamic that’s completely shifted in this program, bigger and better days are ahead for UNLV. I’m blessed to have a chance to be a part of it for the last five years.”

Las Vegas was a center point for Sanchez’s recruiting efforts, which was unusual at the time for UNLV coaches and administrators. Sanchez put “Las Vegas” on the uniform pants and changed look of the field at the stadium by adding the famous city “Welcome” sign to the end zones and setting the yardage markers in diamonds in the form the old Stardust sign.

Now the entire athletic department embraces Las Vegas, and a silhouette of the Strip skyline decorates the basketball court at the Thomas & Mack Center.

Two big factors worked against Sanchez: He failed to put together a winning season and UNLV hasn’t made a bowl game since 2013. Sanchez also wasn’t able to attract large crowds to Sam Boyd Stadium, though the drop in attendance began well before he took over in December 2014.

UNLV’s hiring of Sanchez made national news because he was making the leap from Bishop Gorman, where he went 85-5 and won the Class 4A state championship all six years. His 2014 team won the mythical national championship.

But his lack of on-field success will be another example of those who argue against elevating a coach from high school to oversee a major college program. Three others who made a similar jump — Todd Dodge to North Texas, Gerry Faust to Notre Dame and Bob Commings to Iowa — all struggled to win at the next level.

“You’ve got to be patient with the next guy,” Sanchez said. “You’ve got to make sure you give him a fair opportunity and you support him and you show up to the games and you cheer for him. … I’m not one of those guys who hopes the program doesn’t do well. I’m rooting for them, and I hope (the next coach) gets this thing done.”