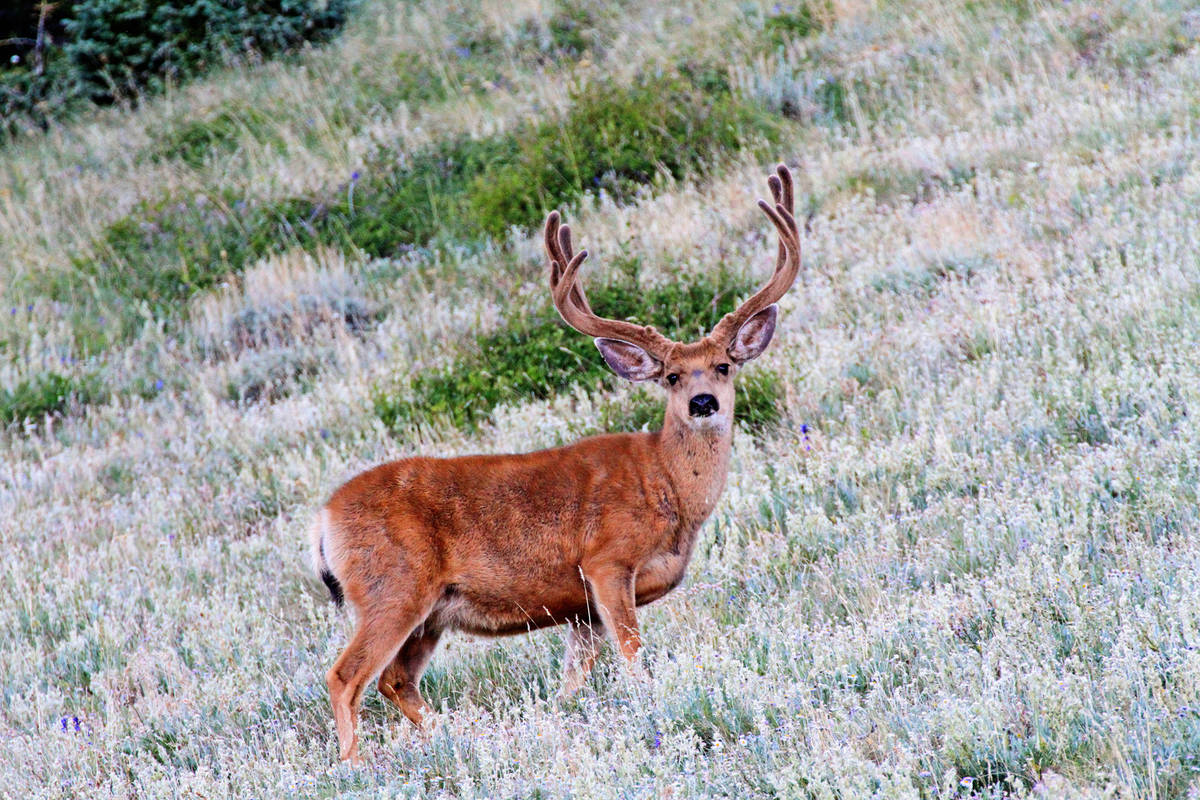 The amount of quality forage in the spring and summer months has a direct impact on a deer’s body condition going into the cold winter months. It also can affect the size of a buck’s antlers. (Scott Root, Utah Division of Wildlife Resources)

In recent months, much of Nevada has been labeled as being exceptional, but not because it is superior to other places, though that might well be the case.

The term exceptional, in this instance, is being used to describe something rare, something many of us have not seen before. It refers to ongoing drought conditions that hold the Silver State in their grasp.

Exceptional drought is the highest category on the U.S. Drought Monitor’s intensity scale and brings with it “widespread crop and pasture losses, fire risk and water shortages that result in water emergencies.” Portions of the Silver State that are not experiencing exceptional drought conditions are classified as extreme or moderate, but mostly extreme.

Extreme drought is the next highest category and is not much better than exceptional. Impacts include major crop and pasture losses, fire risk and widespread water shortages.

Unfortunately, I have seen exceptional drought conditions up close and personal. In the mid-1970s, my family had the experience of living under mandatory water rationing at the household level when the West was suffering from a drought that reduced once-large reservoirs to little more than mud puddles.

While we have not yet reached those conditions in Southern Nevada, outdoor enthusiasts already have experienced temporary launch ramp closures and lane restrictions at the Lake Mead National Recreation Area.

Most recently, the ramp at South Cove was closed when a loader slid into the lake while its operator was attempting to put a pipe mat in place to provide boater access. An alternate launching site is available via a dirt road.

Boulder Harbor also is temporarily closed now due to low water levels, and the ramps at Hemenway Harbor, Callville Bay, Echo Bay and Temple Bar have been reduced to a single lane on pipe mats. Be prepared for long wait times.

While we tend to focus on the drought’s impact on our lives and recreational pursuits, we can’t overlook its impact on the wildlife resources we enjoy. Habitat conditions are in rough shape. Plants and soils are both dry, and even the creosote bushes in the Mojave Desert look stressed.

For bighorn sheep, which normally get a portion of the moisture they need from the food they eat, there is little benefit from the dry vegetation on the landscape. Usually, sheep use of man-made water sources is light during the cool winter months because the animals disperse on the landscape, but not this year.

Conditions have been so dry the sheep have been on those waters constantly. So much so that the Nevada Department of Wildlife has had to haul water to recharge those sources because seasonal rainfall hasn’t.

“Not all big game species are impacted equally,” said Justin Shannon, Wildlife Section chief for the Utah Division of Wildlife Resources during a recent agency podcast that focused on the drought’s impacts on wildlife. “Animals like deer are impacted a lot more severely than animals like elk.

“The food that deer really rely on to get big and put on weight, and to have good body condition scores, those types of things, are not as readily available on the landscape. Sobthey’re impacted harder,” Shannon added.

Since deer spend the spring and summer months packing on fat reserves for the upcoming winter, food availability is critical. Poor body condition for does – female deer — can have direct impact on the number of fawns born in the spring, as well as fawn survival.

On the other hand, “when you don’t, and you miss the monsoonal moisture, and you miss some of that precip, your deer herds struggle a little bit.”