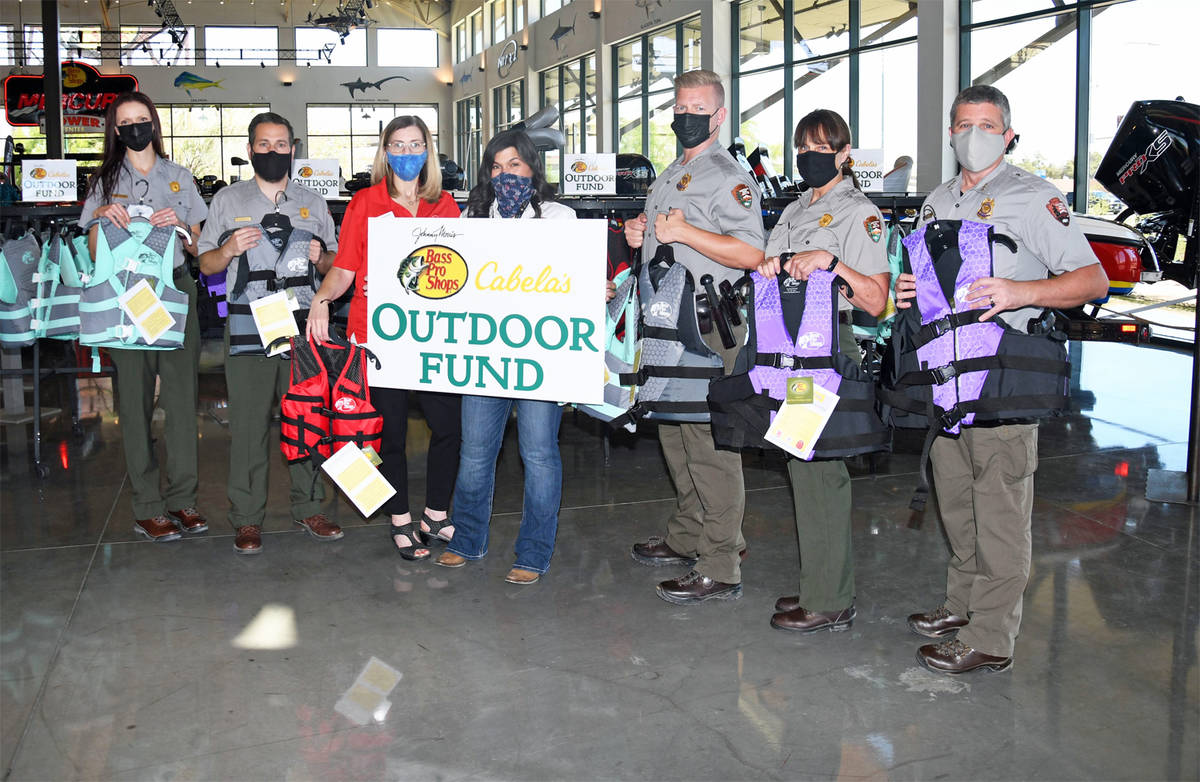 Bass Pro Shops and the Cabela’s Outdoor Fund presented the National Park Service and the Get Outdoors Nevada organization with more than 900 life jackets Tuesday in a ceremony in Las Vegas. The life jackets will be available for Lake Mead visitors to use free of charge. (Lake Mead National Recreation Area)

Though many have been actively boating on local waterways since early March, it is Memorial Day Weekend that will serve as the official kickoff event for the annual boating season. It has long been that way, which is why National Safe Boating Week is always scheduled for the week prior to the holiday weekend.

For state game wardens and park rangers who patrol Lake Mead and Lake Mohave, Safe Boating Week is generally the calm before the storm.

In the days leading up to the busy holiday weekend, any officer who has spent at least one Memorial Day Weekend on boating safety patrol can’t help but worry about what the weekend could bring.

They have seen it before. If the weather is good, the two reservoirs host thousands of recreational boaters and paddlers. And if the weather is bad, the same could still hold true. Boaters can sometimes be unyielding and unwilling to change their plans, regardless of weather conditions.

“I drove six hours to get here, and I am going to launch my boat no matter what,” exclaimed the determined owner of a low-profile ski boat when I warned him one year about high winds predicted by the National Weather Service.

Not many hours later, we found the boater with his swamped boat floating outside of Swallow Bay. It had taken just two wind-driven waves over the transom to ruin his holiday weekend. Luckily, he and his passengers were still alive.

According to the 2019 U.S. Coast Guard Boating Accident Statistics, the most current year available, swamped vessels took fourth position on the list of five most common boating accident types that year.

During my game warden days, we just hoped to make it through the holiday weekend with no fatalities. Boating accidents, rescue operations and medical incidents would come. Of that there was never any doubt, but there was always the hope that none of those events would lead to a fatality.

Statistics show that most boating-related fatalities involve the victim’s failure to wear a serviceable and proper fitting life jacket. Drowning following a boating accident is by far the top cause of death, accounting for 439 of the 613 boating fatalities in 2019. Of those individuals, 362 were not wearing their life jacket, just 57 were, and in 20 cases their life jacket status was unknown.

Similar statistics involving life jacket wear have been documented year after year by the Coast Guard through boating accident investigations conducted by state and local law enforcement agencies across the country.

With this reality in mind, Bass Pro Shops and the Cabela’s Outdoor Fund donated more than 900 life jackets to the National Park Service and the Get Outdoors Nevada organization in a ceremony on Tuesday. The life jackets are to support the Lake Mead National Recreation Area’s free loaner life jacket program.

“We are very thankful for this generous donation of life jackets.” said Sarah Creachbaum,acting superintendent, Lake Mead NRA. “This donation will allow us to fully stock our life jacket loaner stations, places where our visitors can borrow life jackets for the day at no cost, to help keep them safe while they enjoy swimming, paddling and boating in the park.”

Visitors will be able to find the loaner life jackets in both adult and child sizes at six portable Loaner Life Jacket kiosks located throughout the recreation area. All that is asked is that they be returned at the end of the day.

Whatever you do this weekend, be safe.