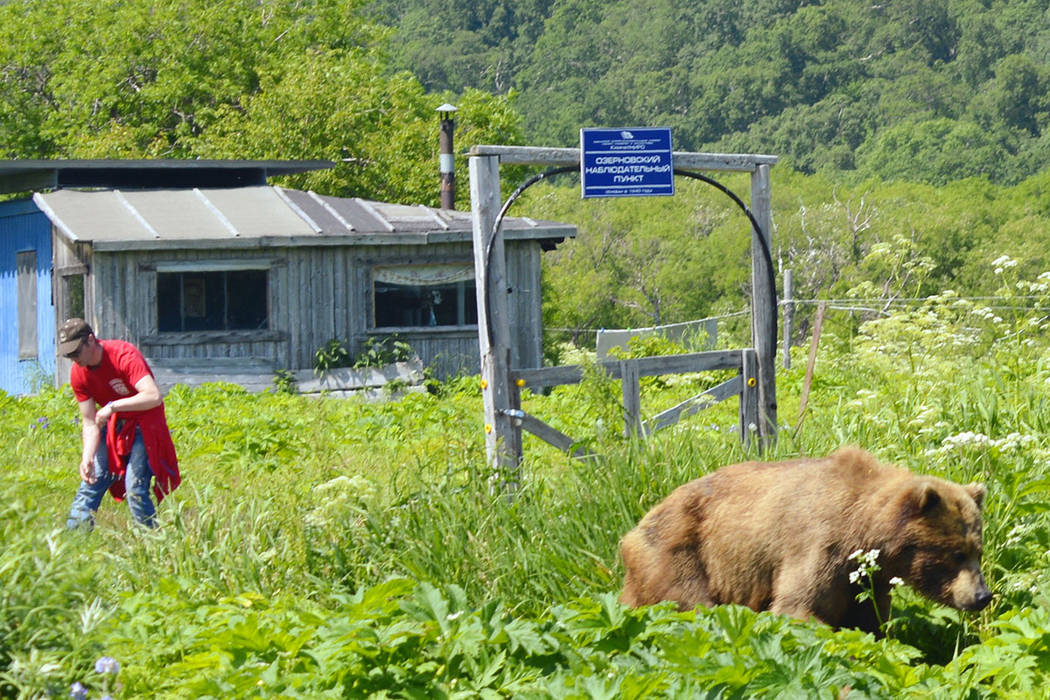 A brown bear and a man are separated by a simple electric fence near Kurile Lake on the southern tip of the Kamchatka Peninsula in Russia on July 20, 2017. Home to around 500 wild bears, the area around the lake is called a bears' paradise, gaining popularity among tourists from Japan, Europe and the United States for rare bear viewings at close range. (Kyodo)

For many of us who grew up during the Cold War, seeing the first advertisements inviting American sportsmen and women to pursue hunting or fishing opportunities in what was once the Soviet Union was a little unnerving.

Probably because we spent our early years ducking for cover beneath school desks during mandatory air raid drills. So, Russia wasn’t exactly at the top of the destination list for budding outdoor enthusiasts. Luckily, politics sometimes change just enough to open the door for new adventure opportunities in places where they were once unthinkable.

Fast forward to 2019 and the Western Hunting Conservation Expo in Salt Lake City. There I came across a professional hunter named Vladimir Koshcheev who was there to book trips for Summits of Russia, a guide service he owns with partner Aleksei Maksimov. I was curious.

“Just two of us,” said Koshcheev when I asked about their operation, “and we organize custom hunts — for American hunters mostly — in Russia and Asia. And we do many things: snow sheep, moose, brown bear, ibex, Argali, duck shooting. So, we do many things, and we enjoy to do it.”

While Koshcheev and Maksimov are both experienced hunters, as guides should be, they are more than that. They each spent five years studying game management at the same university, and that is where they first became friends. “Now we are professional hunters. So, we try to do our best for American hunters,” he said.

When the Kamchatka Peninsula was first opened to foreign hunters, Koshcheev was there studying bears and guided the first group of foreign sheep hunters in August 1990. Not only was it a first for Kamchatka but also for Koshcheev.

“It was my first experience as a guide,” he said, “and I was so lucky. On the first day of our hunt, I had a lady hunter from United States … and she shot the first snow sheep in history taken in Kamchatka by American hunters.”

If you are considering a hunting or fishing trip to Russia, Koshcheev said, “The first thing, and it is very important, don’t (be) afraid to come to Russia because it is not about politics. Our Russian people love you guys. Their hospitality is unbelievable.”

For those who might be considering a mountain hunt, such as one for wild sheep, he said it’s best that you arrive in good physical condition: “If you are a mountain hunter, sheep hunter, be in good shape because we have some real, real mountain hunts. Hunts which must be done on foot, climbing, a lot of tough climbing.”

To emphasize the importance of physical preparation, Koshcheev explained that some of his clients have gone so far as to move to a very mountainous area “where they can climb and climb and climb before coming to Russia.”

In addition to physical preparation, hunters visiting Russia should be prepared for inclement weather that might include everything from rain to snow and extreme cold depending on what and where you are hunting. Koshcheev said the mountains have a climate similar to Alaska or parts of Canada. So, you can use that as a barometer when choosing your clothing and other gear.

When hunting in Russia, you can bring your own firearm, but Koshcheev said your guide will need information about your firearm and you will need permits for importing and exporting it. His company takes care of this paperwork for their clients before they arrive. They also help with their visa request and assistance with making travel plans.

If you enjoy fishing, Koshcheev said that some of his hunting camps offer excellent fishing opportunity, but he also is willing put together special trips just for anglers.

Whatever you choose to do if you visit Russia, Koshcheev said you should “be ready for great hospitality and friendship.”