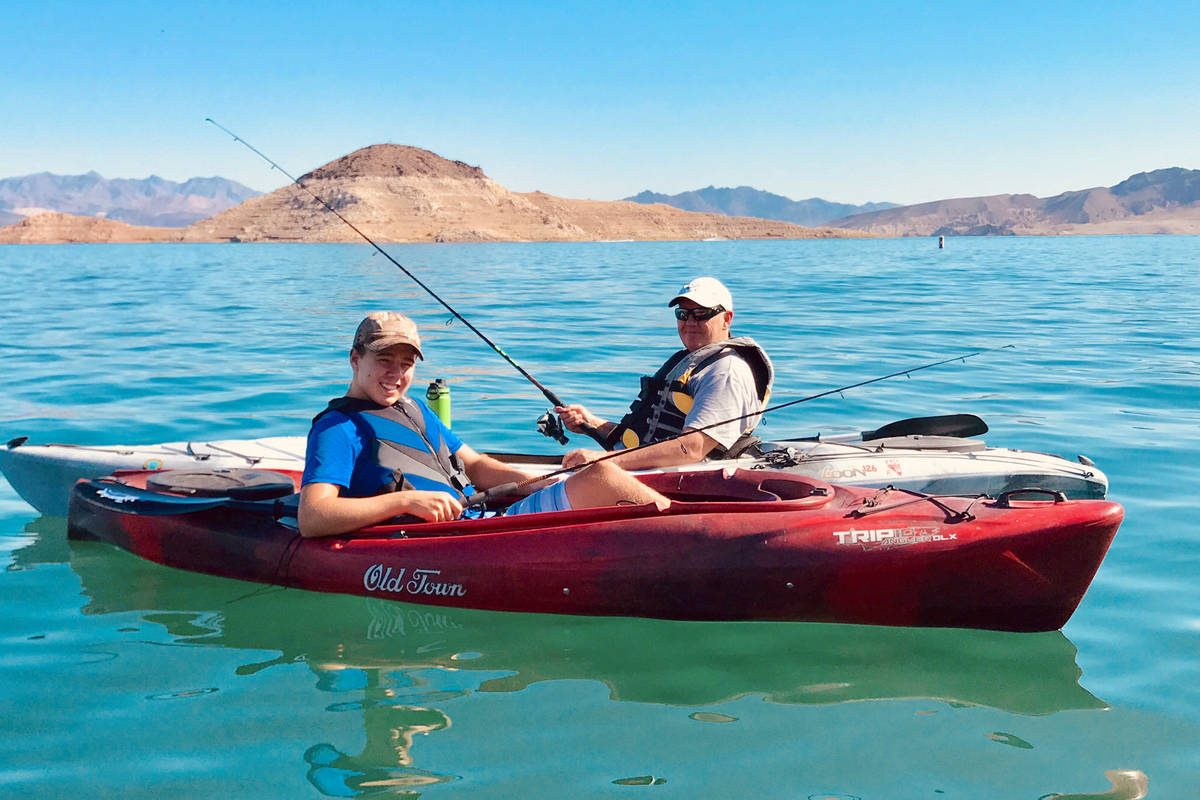 Mike Anderson, Henderson, takes the opportunity to share his love of fishing and kayaking with his son Kaiden at Lake Mead. (Doug Nielsen)

Yelling over the rumble of water making its way through the remnants of downed trees, Brent pointed to the gap between two small logs and told me to drop my night crawler through it.

My sluggish response must have led him to believe I did not hear him, so Brent repeated his direction, emphatically pointing toward the gap with his fishing rod. “Drop the worm through there.”

Less than a foot wide, the gap was a little intimidating, even though it led to a small pocket of water to one side of the stream where it forced its ways through the nature-built barrier. Brent, my older cousin by a couple of years, knew how to fish cold mountain streams, and my mother had asked to him to share some of his knowledge with me. At that moment, however, I was not sure whether he was teaching or taunting me.

Despite fearing my hook would get snagged on something in that gap, I did as Brent said to do. To my surprise, a scrappy rainbow trout took the night crawler as it sunk out of sight. There were other learning moments that day, and others over the years, but few are as memorable as that one.

By following Brent up and down mountain streams on family vacations, I learned how to read the water and to recognize where a wary trout might be holed up.

Years later, while fly-fishing on Haymeadow Reservoir about 200 miles north of Las Vegas, I noticed a fellow fly-fisherman who was catching fish at a much faster rate than the rest of us. Probably two to one. Curiosity led me to observe carefully from what I hope was a respectful distance.

“You are fishing too deep,” the fisherman responded. Obviously, he had been making his own observations. Then he took a few moments out of his fishing time to explain how he used a floating strike indicator to keep his fly above the weed beds where trout were seeking respite from the warm sun. The man also told me that my slow retrieve was not slow enough.

It did not take long for me to make the necessary adjustments. Soon I was catching fish at a much faster rate. He could have ignored my inquiry and asked me to leave him alone, but instead he took the opportunity to share a bit of the knowledge he had gained through his years of experience.

Then again, perhaps he too had been the recipient of a similar lesson from someone he had run into somewhere along his outdoor way. Perhaps he was just paying it forward as they say.

Learning is one of the great benefits of spending time in the outdoors. There is always something new to learn, a skill to develop. And there is always the opportunity to share what we have learned with someone else.

Sharing does not mean giving up our favorite honey holes, but it does mean giving a little of ourselves to someone else. Sharing is never a one-way street. Both the sharer and the recipient benefit.

So too do the traditional outdoor pursuits like fishing, hunting and recreational shooting that provide most of the funding for America’s conservation and wildlife management efforts.

Sharing ensures they have a future.