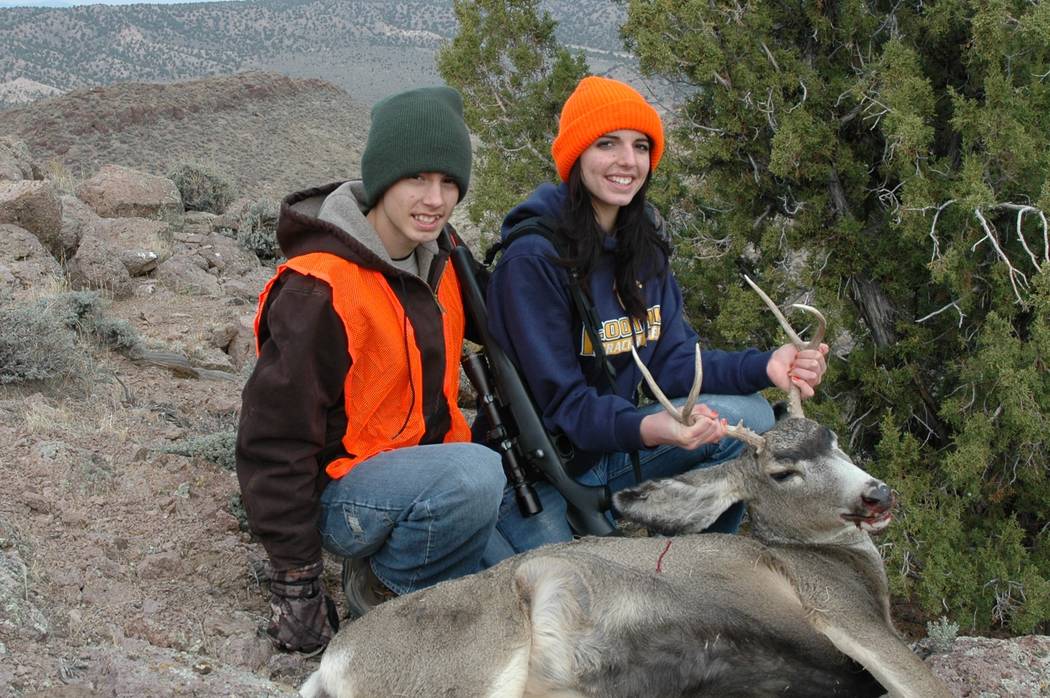 Dallin and Calli Nielsen donned hunter orange for the Nevada mule deer hunt. One of the keys to hunting safety, even in the desert, is making yourself visible to other hunters and hunter orange does the trick. (Doug Nielsen)

Though we talk a lot about the importance of safety and emergency preparedness when it comes to spending time in the outdoors, especially when hunting, there are grim reminders every year that some of us don’t pay as much attention to that talk as we should.

One of those reminders came to the hunting community on Sept. 28 when 17-year-old Bobby Lane entered the Georgia woods to hunt deer with a handful of friends. As Lane worked his way through what some reports have described as heavy foliage, a member of his hunting party mistook the youth for a deer and fired his hunting rifle. The bullet struck Lane who eventually died from his injuries.

True, this happened thousands of miles away from Nevada, nevertheless, such news should give hunters across the country reason to ponder our own safety habits and reinforce our personal knowledge of the rules for firearms safety. This is an opportunity to ask ourselves if we live up to the personal obligations that come with carrying a loaded firearm into the field, obligations that require us to put safety and ethics above all else.

While there are some who think such rules are antiquated and even needless, imagine how different the outcome would have been for Lane had his friend took the time to make sure of his target before aiming his rifle and squeezing the trigger.

That simple step could have gone a long way toward preventing a tragedy that has left Lane’s family and friends to mourn his passing. It also would have changed the outcome for 32-year-old Hector Romero-Hernandez, who fired the round that killed Lane. Regardless of the legal outcome, Romero-Hernandez will spend the rest of his life carrying the memories and weight of what happened that day. A GoFundMe account under the name of Bobby Lee Lane has been set up to help with funeral expenses.

Despite incidents such as this, and the media attention they garner, hunting with a firearm remains one of America’s safest recreational pursuits. According to a National Shooting Sports Foundation report on firearms-related accidents, the injury rate for hunting is just .03 percent per 100 participants. But that includes data from tree-stand falls and other accidents not involving firearms. First on the list of safest activities, and just one place in front of hunting, is billiards/pool, which has an injury rate of only .01 percent.

No matter how remarkable those numbers may be, however, there always is room for improvement. As Lane’s tragic death shows, we can never let our guard down when it comes to safety in the field.

Though the term “dense foliage” can’t be used when describing most of Nevada’s landscape, it’s still a good idea for hunters to take steps to make themselves visible to other hunters. Perhaps the easiest, though not the most popular way to do that is to wear some article of hunter orange clothing while in the field. Even a hat is enough to make a difference.

Some hunters believe hunter orange makes them highly visible to the big-game animals they seek, but experience has taught me that managing your scent, keeping the wind in your favor and limiting movement play a much bigger role in remaining hidden from the watchful eyes of game animals than the color of the clothes you wear.

Safety is not difficult; it just takes a little effort and sometimes a conscious choice.