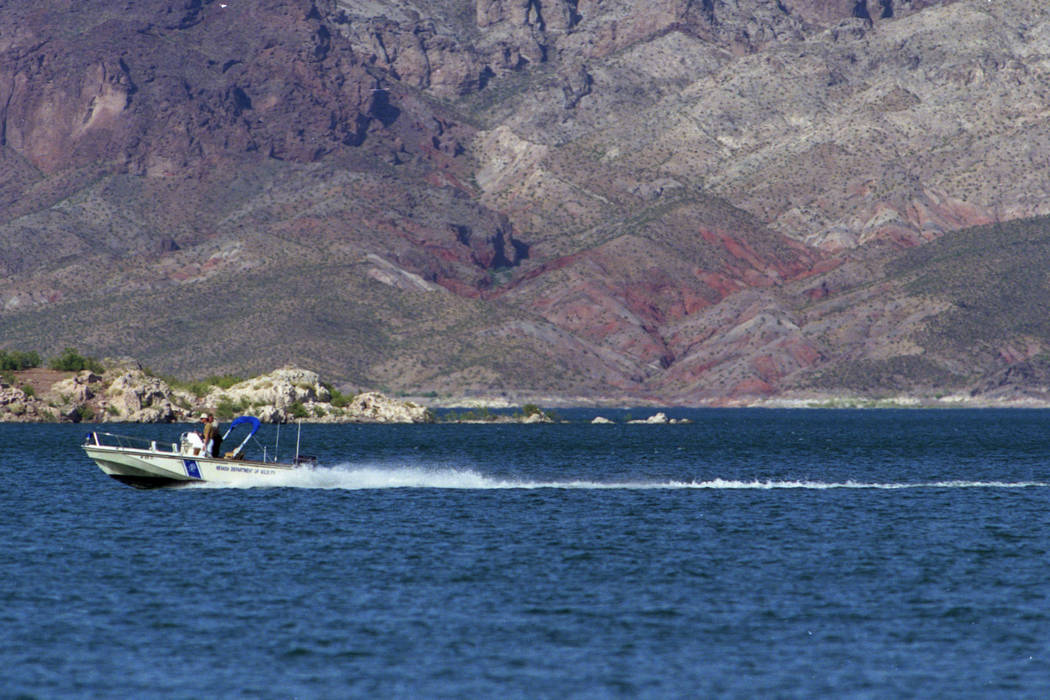 A Nevada Department of Wildlife boat at Lake Mead. Under Nevada state law, a person must be at least 12 years old in order to operate a personal watercraft alone. This is for a story about Glenn Stuchi, 11, who was critically injured the previous weekend when two jet skis collided. The Nevada Department of Wildlife, Arizona Game and Fish, National Park Service and Mohave County are responsible for enforcing the law. Location is the Lake Mead National Recreation Area. In paper 1993-05-29 page 1B.

With early morning temperatures on the cold side in Southern Nevada, anglers may be tempted to stow their fishing rods for the winter months, but that would be a mistake.

While anglers in other parts of Nevada will soon be plying their trade through hard water, if they aren’t already, fishermen in the south will find open water all winter long at Lake Mead and Lake Mohave. What they won’t find on these reservoirs are summer crowds, which for the time being are a thing of the distant past.

In the meantime, anglers can fish just about anywhere they want without being pushed out by other users. Open water doesn’t necessarily translate into fast action, but it does make for good fishing experiences, especially when we share them with friends and family. The catching can be good as well.

For anglers hoping to catch striped bass that break the double-digit barrier, cold temperatures offer yet another benefit. They tend to pull large striped bass from the depths to shallower water. That means stripers pushing past the 10-pound barrier are generally more accessible to anglers. And not only to those fishing from boats. Shoreline anglers will benefit from this trend as well.

Recently, a friend sent me a photo of a stringer of big-bellied stripers he and his fishing partner caught at Lake Mohave. They were wading from the shoreline at first light and throwing a shallow-running Rebel Jointed Minnow, oftentimes called a “broke back minnow.”

The idea behind a jointed lure is fluidity of motion. In other words, the designer is hoping the lure creates the illusion of a smooth-swimming prey fish as the angler works the lure back to shore or boat.

My friends and I had a very productive striper outing one cold winter day with smallish paddle-tail swimbaits on Lake Mead. We cast the white and chartreuse soft-plastic baits to the far side of submerged brush in the back of Vegas Bay and worked them back to the boat with a slow retrieve.

We had several stripers in the 2- to 3-pound range take the swimbaits, but many times they didn’t hit the lure until it was almost back to the boat. That reinforces the notion that you shouldn’t give up too soon. Work and watch your bait all the way back to the boat or the shoreline.

Another winter technique for striped bass is slow trolling with shad imitations or other lures that can replicate threadfin or gizzard shad. Whether I am trolling from a friend’s boat or my kayak, one bait that has proven to be effective time and again is a white ice Super Fluke fished on a Scrounger jig head.

The Scrounger has a long plastic bill that gives a quick vibrating motion to the fluke and other soft plastics. It doesn’t guarantee a day of fast fishing action, but there are days when the fish have a hard time resisting its charm.

And of course, you can’t overlook the effectiveness of live bait. Lake Mead and Lake Mohave both have robust populations of threadfin and gizzard shad, the primary prey species for stripers. They can be fished over the side of the boat or slow trolled behind the boat. However, if you are going to troll your shad, keep in mind that gizzards are much more durable than threadfin.

Black bass action isn’t going to break any speed records during the winter months, but you can still catch both the largemouth and smallmouth varieties. Look for the largemouth in deeper water, perhaps 30 to 60 feet deep along cliff faces. Smallmouth bass can be found in the same type of habitat and similar depths, but don’t overlook submerged boulder fields and rocky shoreline areas.

When it comes to winter bass fishing, the fish aren’t going to be very aggressive. So, as my friend and competitive bass angler, Tim Myers, once told me, you have to work your bait slowly and put it as close as possible to the fish. Then you may have to let it sit there so the fish has a chance to pick it up.

The bottom line is there is fishing opportunity to be had and you don’t have to drill through the ice to find it. So, you may want to keep your rods and tackle box handy.