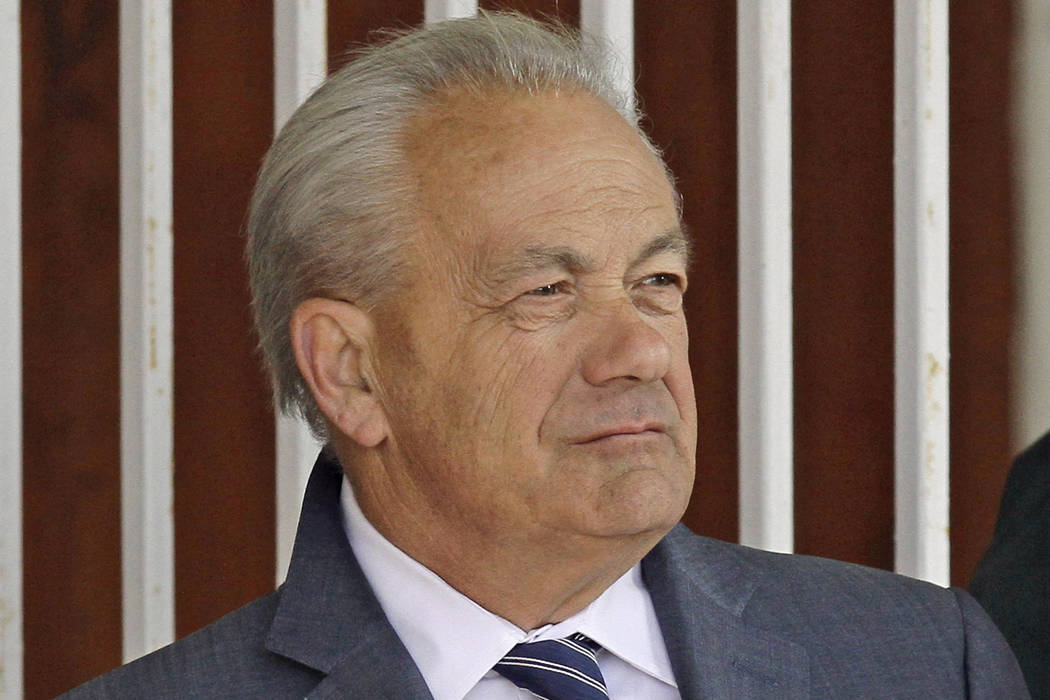 In this March 22, 2014, file photo, horse trainer Jerry Hollendorfer stands in the paddock at Turfway Park in Florence, Ky. Hollendorfer was banned by the ownership of Santa Anita on Saturday, June 22, 2019, after a fourth horse from his stable died--and the 30th overall--at the Southern California track. (AP Photo/Garry Jones)

It’s one of the oldest tactical moves in the PR playbook: When disaster happens, find someone else to blame.

We saw that maneuver executed to perfection last week when management at Santa Anita Park, after resisting calls to end its meet early to prevent any further horse deaths, ordered trainer Jerry Hollendorfer to load his horses, pack his gear and get out of Dodge — in this case Santa Anita and his longtime base at Golden Gate Fields.

Let me say up front that I have no inside knowledge of what led to the decision to excommunicate the 73-year-old Hall of Fame trainer other than the obvious fact that he lost four horses — the most of any trainer — to the injury scourge that claimed 30 equine lives at Santa Anita since Dec. 26. He also reportedly had two horses die at Golden Gate during the period, though one appeared to suffer a heart attack.

But blaming one of the most accomplished and hardest-working trainers in the game for the ills that befell the track seems ludicrous.

Streaks happen all the time in horse racing, and the fact that four horses had to be euthanized is hardly an indication that he’s suddenly become incompetent or is up to no good. He told the Paulick Report this week that he didn’t think he lost any horses the two previous years (I’ve requested the records from the California Horse Racing Board to try to verify that).

And other racetracks, including Los Alamitos, Belmont Park and Monmouth Park, have said Hollendorfer is welcome to continue racing at their facilities. Del Mar, which opens for its summer meet July 17, is expected to announce its decision in the next few days.

Then there’s the 19 medication violations since 2006 reported in a CNN story that coincidentally singled out Hollendorfer shortly before he was banned. I went through everything in his record (it’s all available at the California Horse Racing Board website) and found that all but one was for an overage of Phenylbutazone or some other legal therapeutic drug, meaning it was likely administered slightly too close to a race or didn’t clear the horse’s system in the time frame.

The lone infraction of a more serious nature was a horse that tested positive for scopolamine in February 2007 at Bay Meadows. Scopolamine is a Class III substance, meaning it has no approved therapeutic purpose. However, it’s also an active ingredient in jimsonweed, which has been known to contaminate hay and cause positive tests.

In any case, Hollendorfer paid the $1,000 fine and moved on.

Officials with The Stronach Group, owners of Golden Gate Fields and Santa Anita, did not return phone calls seeking comment. But in a statement last week, management said: “We regret that Mr. Hollendorfer’s record in recent months at both Santa Anita and Golden Gate Fields has become increasingly challenging and does not match the level of safety and accountability we demand.”

One can only hope that Hollendorfer will soldier on and that the desire for accountability applies to the C-Suite as well as those who work long and hard every day with their horses.

The #RJhorseracing handicappers are looking north this week, taking on the $1 million Queen’s Plate — the first leg of the Canadian Triple Crown — and the $300,000 Highlander Stakes preceding it at Woodbine Racetrack.

In the Highlander, a 6 furlong turf dash, the crew is siding with Extravagant Kid, 6-1 on the morning line. They have Caribou Club (7-5) and White Flag (7-2) knotted for second.

I have White Flag on top, with Wet Your Whistle and Caribou Club filling out the top slots.

In the Queen’s Plate, run at 1¼ miles on the all-weather synthetic track, the crowd ’cappers are giving a slight edge to Skywire, 4-1 on the morning line, over favored Avie’s Flatter (5-2), with One Bad Boy (7-2) and Desert Ride (8-1) tied for third.

“Afeet Alex colt for (trainer Mark) Casse draws inside of Avie’s Flatter and been working well for this,” wrote handicapper Mas Yoshinaga of the crew’s pick.

I’m breaking ranks and going with Tone Broke (6-1), who ran great when finishing second in the Sir Barton Stakes at Pimlico, over Avie’s Flatter and the filly Desert Ride (8-1), who needs only to improve a bit to extend the recent female domination of this race.