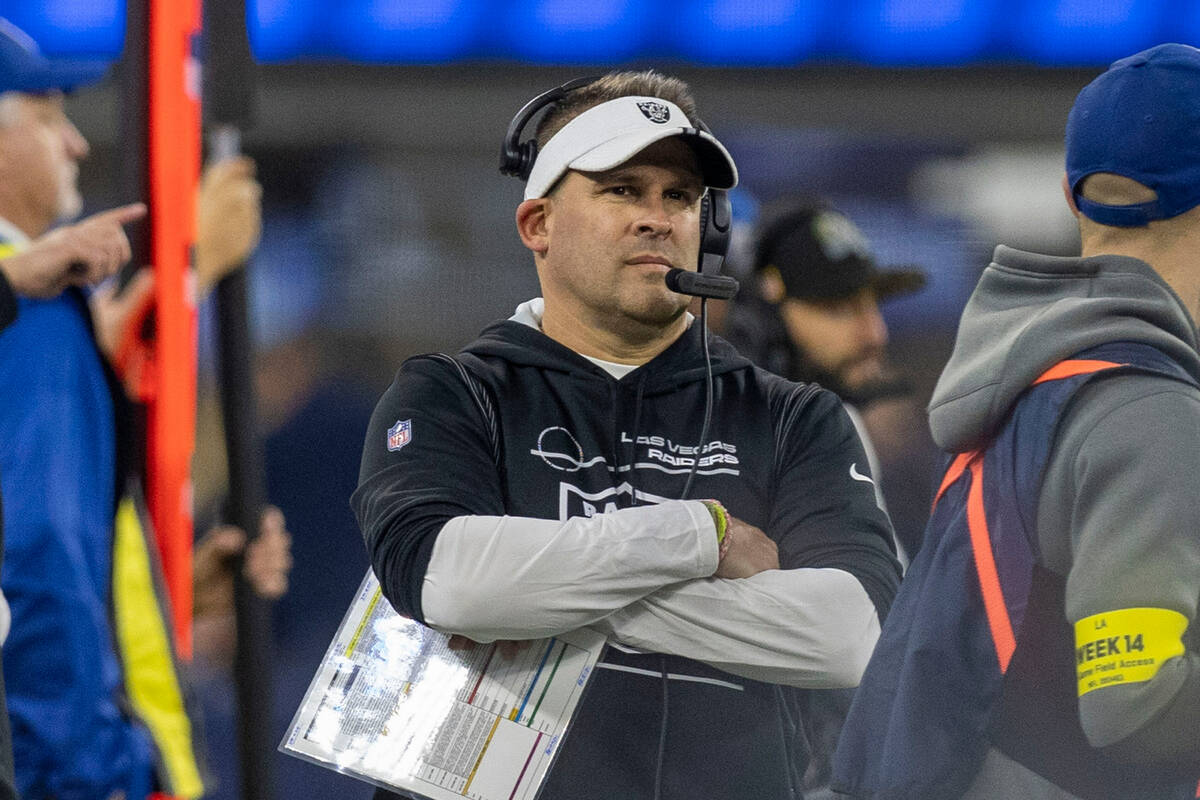 Raiders head coach Josh McDaniels looks on during the second half of an NFL game against the Los Angeles Rams at SoFi Stadium on Thursday, Dec. 8, 2022, in Inglewood, Calif. (Heidi Fang/Las Vegas Review-Journal) @HeidiFang 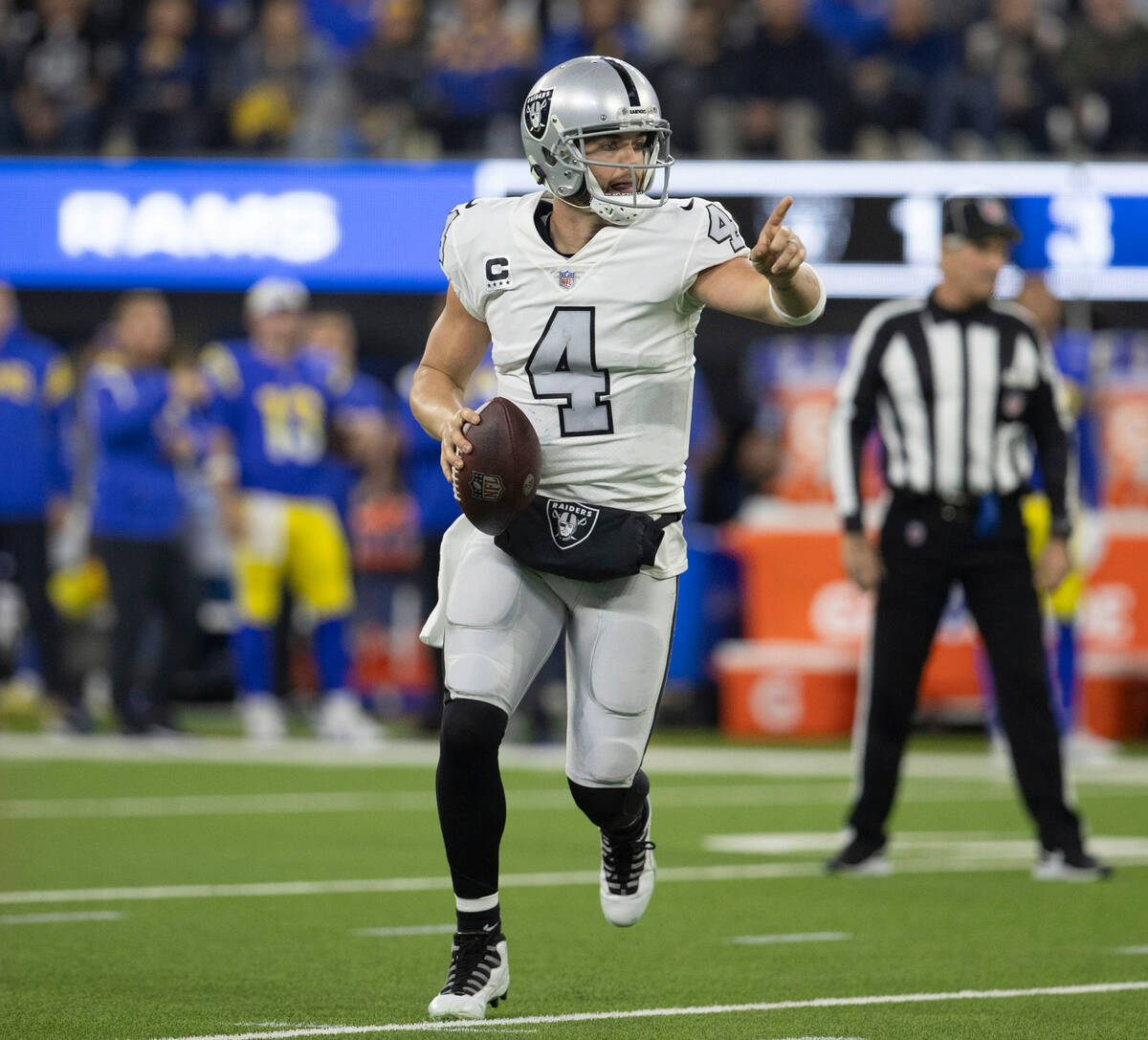 Raiders quarterback Derek Carr (4) signals as he scrambles during the first half of an NFL game against the Los Angeles Rams at SoFi Stadium on Thursday, Dec. 8, 2022, in Inglewood, Calif. (Heidi Fang/Las Vegas Review-Journal) @HeidiFang 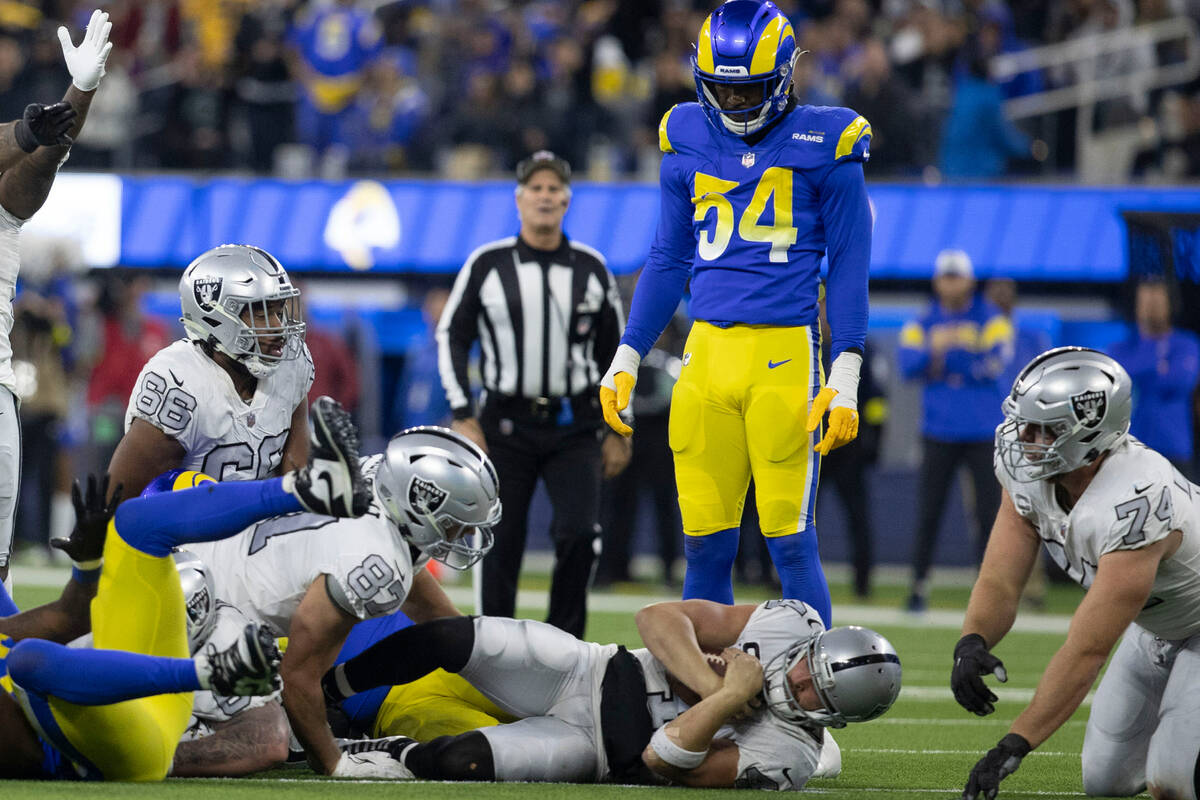 Raiders quarterback Derek Carr (4) picks up a fourth down conversion as Los Angeles Rams linebacker Leonard Floyd (54) looks on during the second half of an NFL game at SoFi Stadium on Thursday, Dec. 8, 2022, in Inglewood, Calif. (Heidi Fang/Las Vegas Review-Journal) @HeidiFang 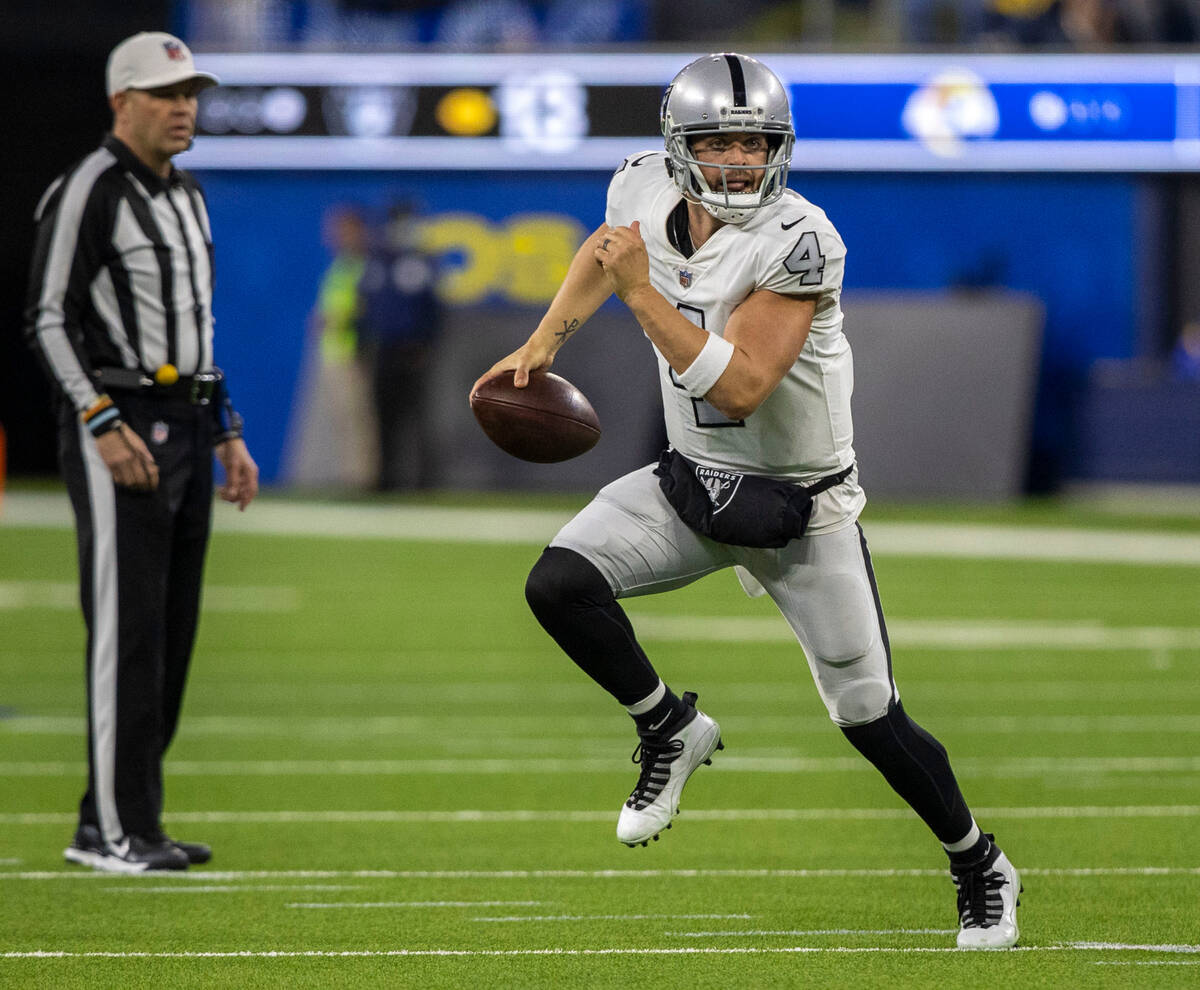 Raiders quarterback Derek Carr (4) scrambles with the football during the first half of an NFL game against the Los Angeles Rams at SoFi Stadium on Thursday, Dec. 8, 2022, in Inglewood, Calif. (Heidi Fang/Las Vegas Review-Journal) @HeidiFang 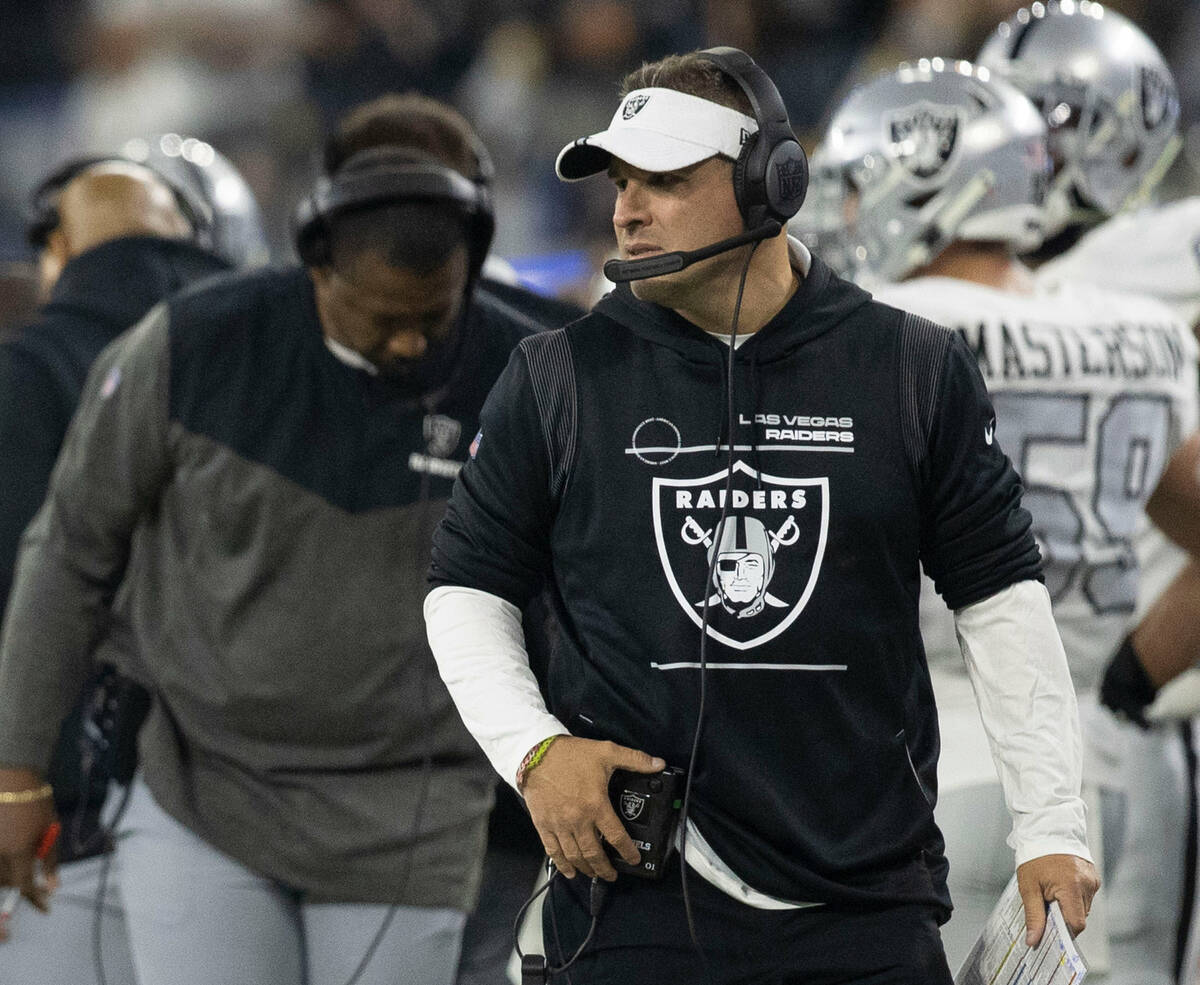 Raiders head coach Josh McDaniels looks on from the sideline during the second half of an NFL game against the Los Angeles Rams at SoFi Stadium on Thursday, Dec. 8, 2022, in Inglewood, Calif. (Heidi Fang/Las Vegas Review-Journal) @HeidiFang

At least Josh McDaniels knows who to blame.

“The reality is, we let an opportunity go. I’m responsible for that,” the Raiders coach said Friday, vaguely addressing the playoff push they squandered Thursday with a 17-16 road loss to the Los Angeles Rams.

“If they’re going to point a finger, point it at me.”

For the umpteenth time this season, the Raiders were demolished in the second half of a football game. This time by the lowly Los Angeles Rams — and a quarterback they acquired at the beginning of the week, backup receivers and a simplified offense devoid of the intricacies that are mastered over months.

That they managed to outscore a Raiders team equipped with the NFL’s best wide receiver, running back and defensive player calls into question the way McDaniels prepares and adjusts. Or perhaps it crystallizes an answer if the unacceptable losses to the Arizona Cardinals, New Orleans Saints, Jacksonville Jaguars and Indianapolis Colts hadn’t already.

“We got to make more plays along the way to avoid putting ourselves in a situation where we put it in a one- or two-play sequence to determine the outcome,” McDaniels said. “It’s a hard lesson to learn,” he, the teacher, added, “but it’s something that we’re going to need to do better as we go forward.”

The Raiders are the exact same team now that they were in September. The one among 32 that can stop Davante Adams. That forfeits three-score leads with conservative schematics and knows no penalty too untimely and no play call too cute for its own good.

Nor has the institutional belief in McDaniels, who, to his credit, maintains the support of players and owner Mark Davis. The Raiders won three consecutive games after Davis publicly endorsed McDaniels following their 2-7 start — showcasing improvement in the trenches while featuring Adams and running back Josh Jacobs offensively.

Their brilliant All-Pro caliber play — paired with that of defensive end Maxx Crosby — is marginalized by the situational struggles that have undermined their team’s potential. They’re in the midst of three of the greatest individual seasons in franchise history.

Only four teams commit more penalties than the Raiders, who yield 55.8 yards per game in flags. They remain horrendous within the red zone, besting only the Houston Texans, New England Patriots and Denver Broncos in touchdown percentage (45.95). And equally horrendous defending the red zone, topping only the Kansas City Chiefs, Detroit Lions and Cardinals in the defensive iteration of the same statistic (65).

Adams has four games with more than 100 receiving yards and two touchdowns. Plus four games in which he’s inexplicably caught three passes or fewer, which happened once in his last four seasons with the Green Bay Packers.

“We’re going to try to go back to work and fix the things that aren’t being done well enough to close out these close games,” McDaniels said.

Time for a lap?

Among the proposed fixes were saunters around the practice field under the scorching sun, assigned to Raiders players during training camp when they errored in practice. McDaniels is probably due a lap or two at this juncture, but — as the Raiders have proven — there isn’t much of a point.

“We were in position to have a chance to win, that’s the reality,” McDaniels said. “However good or bad we had played up to that point, we had played well enough to earn that right to be in there and try to close it out, and it gets to 6-7.”

At least he knows who to blame. 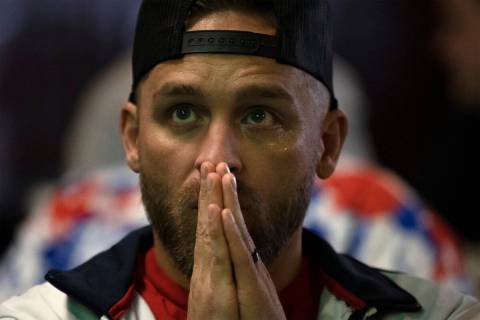