This was supposed to be the year the Browns finally turned things around.

After Hue Jackson (3-36-1 as Cleveland’s coach) was fired midway through last season, the Browns won five of their final seven games behind rookie quarterback Baker Mayfield.

Cleveland became the favorite to win the AFC North after it acquired receiver Odell Beckham Jr. in March and was a trendy pick to top its season win total and possibly make a Super Bowl run.

Then the Browns were blown out by 30 points by the Titans in the season opener, and all bets were off. After a 2-6 start, Cleveland has won four of its last five games. But, at 6-7, it will have to run the table — and beat Baltimore along the way — to salvage a push on its season win total (9).

The Browns were at 9½ before dipping to 9 and, along with the Chicago Bears, will be among the biggest winners for Las Vegas sportsbooks in the season wins market if they stay under their total.

The Bears (7-6), who went 12-4 last season, need to win out to top their total (9). But that appears unlikely with the Packers, Chiefs and Vikings on deck.

“I can tell you what happened to the Browns. They promoted the wrong guy to be their coach. It’s that simple,” he said. “That team, having a record like that with their talent level, it’s frankly ridiculous. It’s all because that coach doesn’t know what he’s doing.”

Bettors were down on the Ravens before the season, thinking the Chargers gave the rest of the NFL a blueprint on how to beat Lamar Jackson after shutting down the Baltimore quarterback in the playoffs. But the Ravens (11-2, 8½) already have shattered their win total and are the favorites to win the Super Bowl.

“Everybody was betting the Ravens’ under wins. We’re actually going to win quite a bit on that going over,” Murray said. “Baltimore was the forgotten team. Jackson looked so bad in that playoff game, people figured Baltimore would fall back because of Cleveland.

“They forgot John Harbaugh is one of the best coaches in the NFL, and Kitchens is not.”

Books also will do well on the Ravens winning their division.

“We actually could not get a (division) bet on the Ravens,” CG Technology sportsbook director Tony DiTommaso said. “We lost to every team in that division except the Ravens.”

“We wanted to book the Niners to do well,” Murray said. “They have to be the biggest surprise. I know (Westgate vice president of risk) Ed (Salmons) liked them in the preseason, but I don’t think anybody thought they’d be this good.”

A Westgate bettor will win $18,969 on a $30,350 wager on the Bills Over 6½, and Buffalo also represents one of the biggest losers for CG Technology.

— The Raiders (6-7, 6) have matched their win total and need one more victory to cash over tickets. They’re 7-point favorites over the Jaguars on Sunday in their final regular-season home game in Oakland.

CG Technology, which offered adjusted win totals after the season started, would be a big winner if Miami finished 4-12.

“They bet the Dolphins over 5 and under 3 and 3½,” DiTommaso said. “It would be our best season win total if it falls 4.” 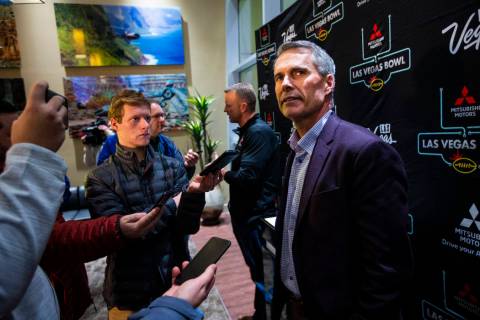