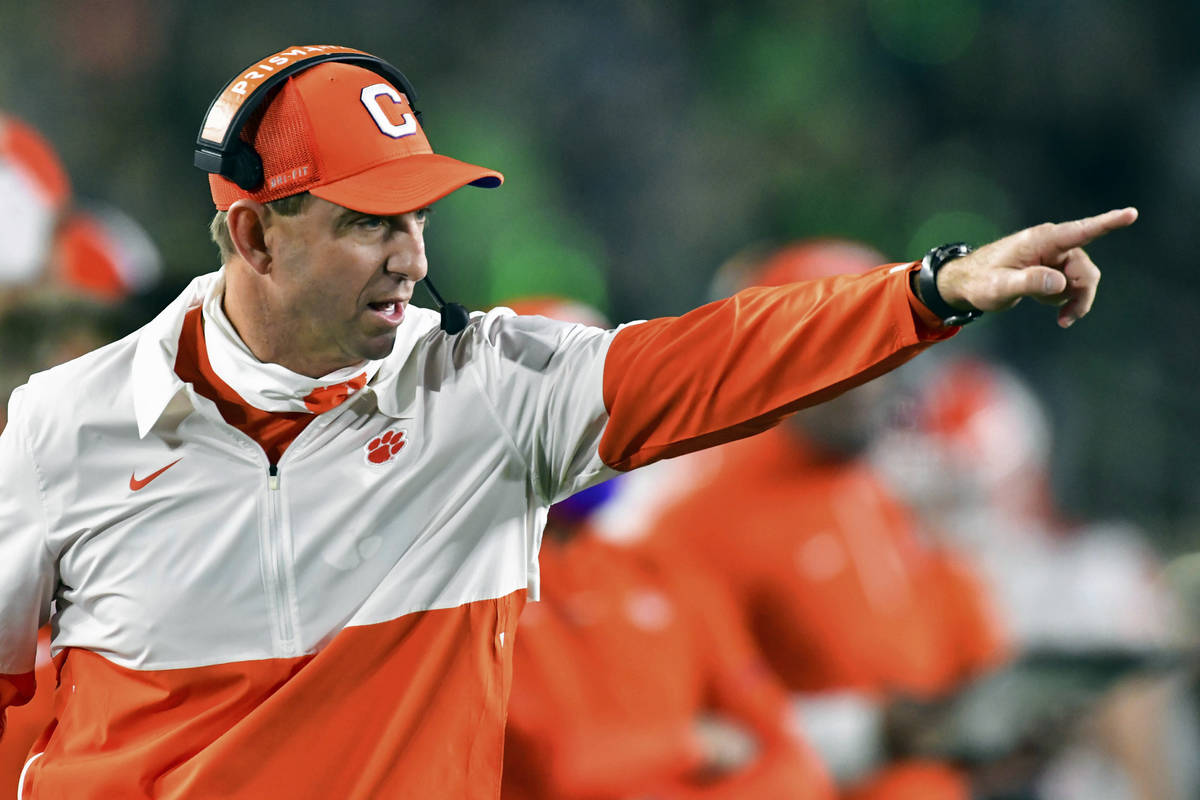 When Lou Holtz led Notre Dame to its last national championship in 1988, it was comical how he praised even its weakest upcoming opponent.

Most coaches use a similar script to not give their foe any extra incentive. But Clemson coach Dabo Swinney flipped the script when he ranked Ohio State No. 11 in his final Coaches Poll.

What do Las Vegas oddsmakers make of Swinney’s slight of the Buckeyes before Friday’s College Football Playoff semifinal?

“He’s either stupid or he knows they’re going to beat them, no problem,” Westgate sportsbook vice president of risk Ed Salmons said. “You can tell when Dabo is really confident.”

“He’s got confidence. He gave them more bulletin board material but he doesn’t care,” he said. “That’s what happens when you’ve got 82 All-Americans. You can get a little cocky.”

No. 2 Clemson is a 7½-point favorite over No. 3 Ohio State in a rematch of last season’s CFP semifinal. The Tigers trailed 16-0 before rallying for a 29-23 win and cover.

Clemson, which crushed Notre Dame 34-10 in the Atlantic Coast Conference title game, has been a cover machine in big games under Swinney, going 14-3 ATS in ACC championships, bowls and CFP games.

“It just seems like when Clemson wants to, it can really rise to the occasion,” Salmons said. “The thing that scares me with Ohio State is its defense is nothing like last year’s defense, which had two of the top three picks in the NFL draft.

“Everything went right for Ohio State last year and they still blew it in the end.”

Salmons bet on Clemson -6½ and recommends a wager at -7 or less. Handicapper Eric Parkila made Clemson -8 his best bet in the Review-Journal Bowl Challenge. Parkila is 3-1 ATS in bowls and 44-29-2 (60.2 percent) overall in the RJ this college football season.

“Ohio State played six games and the Big Ten changed the rules for them to play in the conference championship game,” said Parkila (@ParkilaSports). “(Buckeyes QB) Justin Fields has struggled at times against a weak schedule. (Tigers QB) Trevor Lawrence should be able to take advantage of the Ohio State secondary.”

The Buckeyes won but didn’t cover in a 22-1o win over Northwestern in the Big Ten title game.

No. 1 Alabama is a consensus 19½-point favorite over No. 4 Notre Dame in the other CFP semifinal. The total is 65½ and Salmons and two-time defending RJ College Challenge champion Dana Lane like the under.

“This must be a slower pace for Notre Dame to have success,” said Lane (@DanaLaneSports), 46-30-2 ATS (60.5) this season. “I think they’re going to cover, but it’ll be because of their offensive line and (running back) Kyren Williams.

“Alabama will try to control the line of scrimmage with straight-ahead running like it did a few years ago.”

The Crimson Tide whipped the Fighting Irish 42-14 in the 2013 BCS national title game and Clemson ripped Notre Dame 30-3 in the 2018 CFP semifinals. Friday’s spread is the largest in CFP history.

“Notre Dame has so much to play for in this game, just because of how they flopped again against Clemson. Anywhere you go in the media, people have written Notre Dame off in this game,” Salmons said. “Myself included. I don’t think they have any chance to win. But if Notre Dame can keep this game somewhat reasonable, it will be some kind of victory for them.”

Salmons said he leans to Notre Dame +20 and the under based mostly on Alabama’s penchant for building a big halftime lead and then playing conservatively in the second half.

“Alabama has a history of getting a big lead, then running the ball and grinding it out,” he said. “And I don’t think Notre Dame wants to get in a shootout in this game. They’re going to try to extend it as much as they can.”

Salmons said the Westgate’s biggest CFP decision will be Notre Dame in the first half.

“People love to bet Alabama in the first half,” he said.

“They’ve been gold in the first half,” Bogdanovich said. “That’s more of their true form and then they call off the dogs.”

The books will need both underdogs and the unders.