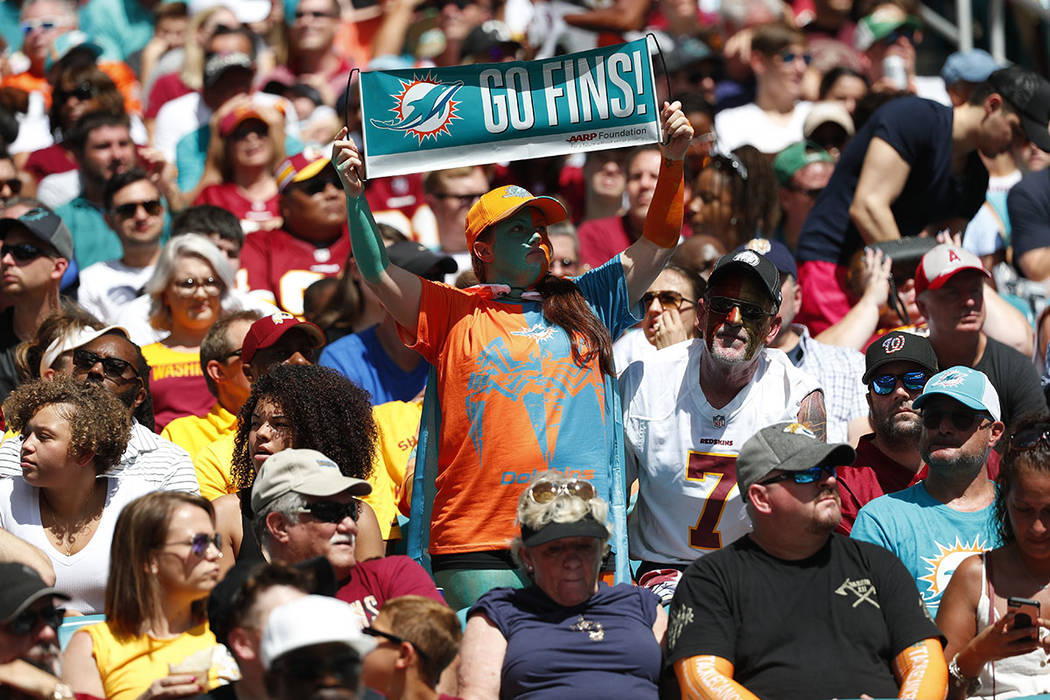 Miami Dolphins fans cheer the team, during the first half at an NFL football game against the Washington Redskins, Sunday, Oct. 13, 2019, in Miami Gardens, Fla. (AP Photo/Wilfredo Lee)

If Las Vegas wasn’t a city that never sleeps, the Dolphins and Jets would be keeping local bookmakers awake at night this season.

Bettors have padded their bankrolls by fading the pair of AFC East pushovers as Miami and New York entered Sunday with a combined 1-7 record against the spread.

But gamblers gave back a big chunk of their winnings Sunday when the Dolphins (0-5) covered in a 17-16 loss to the Redskins and the Jets (1-4) earned their first win in a 24-22 of the Cowboys in the two biggest decisions of the day for Las Vegas sportsbooks.

“Everyone was laughing because we needed the Dolphins for the most money,” CG Technology sportsbook director Tony DiTommaso said. “It was awful. We were very lucky to get there.”

Miami — which closed as a 6-point home underdog after the line was at 3½ most of the week — was in a virtual must-lose situation in its quest to secure the top pick in the 2020 NFL draft in Las Vegas.

The Dolphins appeared to have the loss well in hand until Ryan Fitzpatrick replaced Josh Rosen in the fourth quarter and rallied Miami from a 17-3 deficit. “Fitzmagic” threw an 11-yard touchdown pass to DeVante Parker with six seconds left to make it 17-16.

The Dolphins then went for two and the win but Kenyan Drake dropped Fitzpatrick’s throw in the flat and appeared to have no chance to score anyway as Washington (1-5) held on for its first victory.

“There was joking that the owner was probably relieved they didn’t get the two and they can still get the No. 1 draft choice,” The Mirage sportsbook director Jeff Stoneback said.

“We had a very good day with all these ’dogs covering. It was probably the second-best weekend we’ve had this year.”

Underdogs continue to excel in the NFL as they went 8-3 ATS with six outright wins Sunday by the Jets, Texans, Niners, Steelers, Cardinals and Saints.

Sharps were on the Jets as 7-point home underdogs mostly because of the return of quarterback Sam Darnold. But the betting public was all over the Cowboys in the biggest win of the day for MGM Resorts and Station Casinos. Darnold threw for two first-half TDs as New York took a 21-3 lead and held on for its first win.

“I was really surprised how bad Dallas played,” Sunset Station sportsbook director Chuck Esposito said. “Three weeks ago, both the Rams and Cowboys were 3-0 and at that point I thought the Cowboys were the best team in the NFC. Now they’re 3-3 and the Rams are 3-3 and looking up in their division at the Seahawks and 49ers.”

The public won big on Seattle, which erased an early 20-6 deficit at Cleveland in a 32-28 win and dealt Caesars Entertainment a six-figure loss on the game, which closed at pick’em.

The public also cashed in on San Francisco, a 3-point underdog that limited Jared Goff to a career-low 78 yards passing and stopped the Rams on downs four times in a 20-7 win.

“The Rams’ offense looks out of sorts to me,” Esposito said. “They don’t look like the same team as last year. They did not have a good Super Bowl and it’s carried over to this year.”

The Chiefs suffered their second straight loss in a 34-27 defeat to the Texans, who erased an early 17-3 deficit to deliver a big win for most books. Sharps were on Houston, which closed as a 3½-point underdog after the line opened at 8½.

“The Chiefs can’t stop anybody,” DiTommaso said. “When they have to outscore everybody every week, that’s not a recipe for success.”

Jaguars rookie QB Gardner Minshew has been compared to Uncle Rico, the character from the movie “Napoleon Dynamite” who wanted to bet that he could throw a football “over them mountains.” The mustachioed Minshew mostly threw the ball over his receivers’ heads in a 13-6 loss to the Saints, finishing 14 of 29 for 163 yards, no TDs and one interception.

Teddy Bridgewater helped New Orleans improve to 4-0 without injured QB Drew Brees as an MGM bettor won a $100,000 wager on the Saints, who closed as 2½-point underdogs.

“The 49ers look to be the real deal but right now the Saints are the best team in the NFC,” Esposito said. “They’re winning with defense. If the Super Bowl line was posted today, it would be based on the Patriots and Saints.”