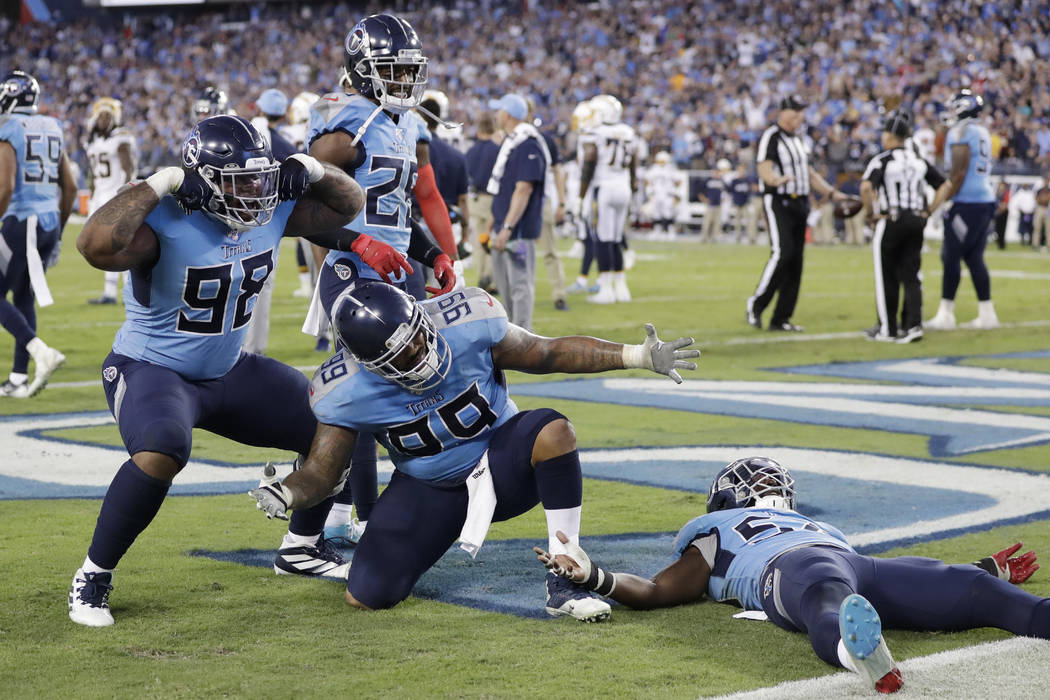 Road underdogs are a sizzling 45-23-2 ATS this season (66.1 percent) and backing them Sunday proved once again to be a profitable proposition.

Unless you had the Chargers. If you did, we offer our heartfelt condolences. Los Angeles had two touchdowns reversed by replay in the final minute before Melvin Gordon fumbled at the goal line and the Titans recovered in the end zone to preserve their 23-20 win.

The vast majority of bettors were on Tennessee, which closed as a consensus 2½-point favorite at Las Vegas sportsbooks.

“I have no idea how we lost the Chargers game,” CG Technology sportsbook director Tony DiTommaso said. “To have two calls reversed and then fumble the ball at the goal line is a bitter pill to swallow.”

The game closed at 3 at the South Point, which paid most Titans bets and refunded most Chargers wagers.

“That hurt our day pretty good,” South Point sportsbook director Chris Andrews said. “We try to avoid 3s like everyone else in the world. We could’ve used the Chargers.”

The books also lost big on the Bengals, Falcons and Seahawks.

But, per usual, they won overall on the day thanks in large part to the Redskins covering in a loss to the 49ers and the Cardinals beating the Giants outright.

San Francisco improved to 6-0 with an ugly 9-0 win at Washington but failed to cover the 10-point spread in relentless rain and wind that turned FedExField into a mud bowl.

“We won the big one, which was San Francisco,” William Hill sportsbook director Nick Bogdanovich said.

William Hill won more than $1 million across the country on the game, in which the Redskins were reportedly only the second team in the last 25 years to cover the spread without scoring.

Arizona beat New York 27-21 as a consensus 3½-point underdog after the line moved from 3 on Sunday morning. The Giants rallied from an early 14-0 deficit and were driving for a potential go-ahead touchdown midway through the third quarter when Chandler Jones strip-sacked Daniel Jones and recovered the fumble. Three plays later, the Cardinals scored to go ahead 24-14.

A William Hill bettor in New Jersey lost a $400,000 straight bet on the Falcons at plus 3 (even) but the book still lost on the game.

“The masses were all over the Rams,” Bogdanovich said.

So-called sharp bettors were on Atlanta, which is 18-22 since blowing a 28-3 lead over the Patriots in its 34-28 overtime loss in Super Bowl LI.

That big bettor got off easy compared to the CG Technology gambler, or gamblers, who lost a total of $650,000 over the weekend on a series of six-figure money line wagers.

“That was our day, having the Saints get there,” DiTommaso said. “The sharps were actually on the Bears.”

Sunset Station sportsbook director Chuck Esposito gives a slight edge in the NFC to the Saints (6-1) over the 49ers and Packers (6-1), who cruised to a cover as 6-point favorites in a 42-24 win over the Raiders.

“Jimmy Garoppolo hasn’t been dynamic, but he’s managed the game well, and the Niners’ running game and defense has been their recipe for success,” he said. “Defense has been the key to the Saints going 5-0 without Drew Brees. They’ll be awfully tough to beat when they get Brees and Alvin Kamara back. If the Packers get Davante Adams back in a few weeks, they’ll be awfully good, too.”