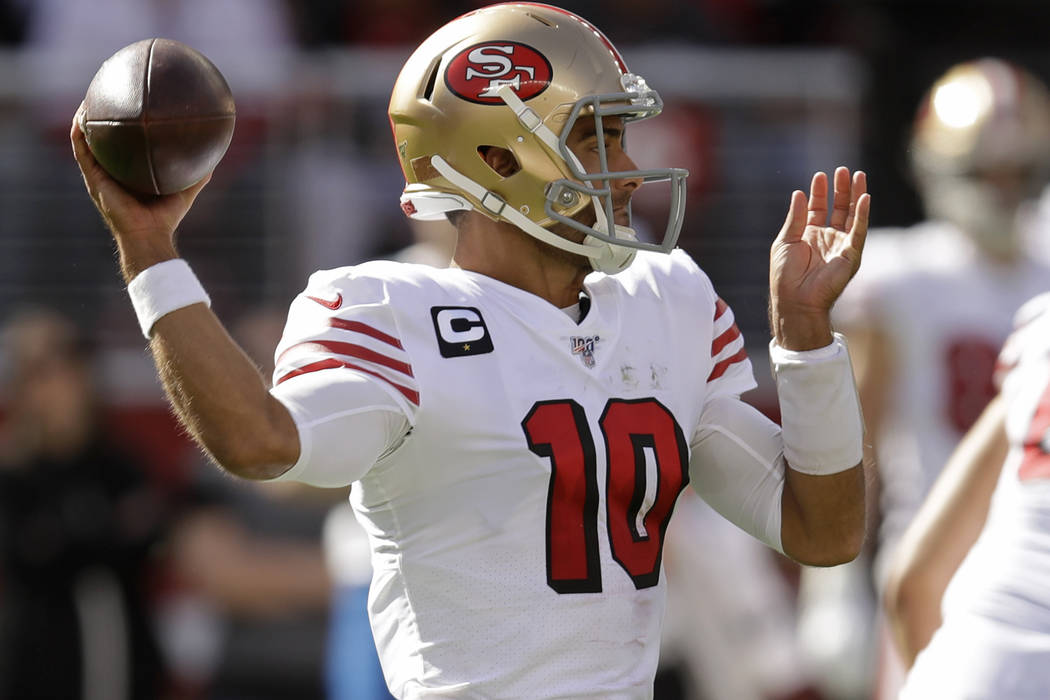 A Super Bowl matchup between the storied franchises would be overflowing with storylines, including a showdown between quarterbacks Tom Brady and Jimmy Garoppolo, who was traded from New England to San Francisco in 2017, reportedly against the wishes of Patriots coach Bill Belichick.

The Saints (7-1) have shorter Super Bowl LIV odds than the Niners at the Westgate sportsbook — which has New England as the plus 150 favorite, New Orleans at 5-1 and San Francisco at 7-1 — and want a shot at redemption after a bad call in last season’s NFC title game cost them a trip to the Super Bowl.

All three teams cruised to covers at home Sunday, with the Niners whipping the Panthers 51-13 as 4-point favorites, the Patriots beating the Browns 27-13 as 10-point favorites and the Saints crushing the Cardinals 31-9 as 12-point favorites in the return of Drew Brees.

“In the AFC, it’s clearly the Patriots and everybody else right now,” Sunset Station sportsbook director Chuck Esposito said. “In the NFC, five teams are really playing well right now in the 49ers, Saints, Vikings, Packers and Rams.

“There’s still a lot of football left, but if you look at the 49ers, their defense is lights out and they can run the ball. If you can run and play defense, you can do well in this league.”

MGM Resorts sportsbook was bailed out by the Niners when a bettor lost a total of $300,000 in wagers on Carolina.

“That saved us,” The Mirage sportsbook director Jeff Stoneback said.

But Las Vegas books were dealt their largest loss of the day by the Packers, who covered as 5-point road favorites in a 31-24 victory at Kansas City on “Sunday Night Football.”

An MGM Resorts bettor won a six-figure wager on Green Bay, which turned an otherwise profitable day into a small loser for MGM and into a “pretty good” loser for William Hill.

“The day will come down to the Chiefs,” said Jeff Davis, Caesars Entertainment sportsbook director of trading, before the Sunday night game. “It will be a huge decision.”

The Patriots were another big winner for bettors and are tied for the NFL-best spread record at 6-2 ATS with the Saints, Packers and Rams. San Francisco is 5-2 ATS.

The Broncos were the biggest winner for the books, covering as 6-point underdogs in a 15-13 loss to the Colts.

“We had a good morning, but it would’ve been a lot better if the Colts had lost,” Westgate sportsbook director John Murray said.

Lions bettors and the books lost on a dreaded backdoor cover in Detroit’s 31-26 win over the Giants, who closed as 6-point underdogs. Daniel Jones threw a 4-yard touchdown pass to Saquon Barkley with 1:19 left for a cover that was glorious for an MGM Resorts bettor who won a six-figure wager on New York.

Sharp bettors and the books won big on the Raiders, who covered as 5-point underdogs in a 27-24 loss at Houston. Oakland didn’t trail until Deshaun Watson escaped a pass rush in spectacular fashion before throwing the winning 9-yard TD pass to Darren Fells with 6:26 left.

On a Sunday in Las Vegas with countless other wagering options including the World Series, a Golden Knights home game and a dozen NHL and NBA contests, wagering on every NFL game dwarfed everything else.

“Nothing compares to the NFL,” CG Technology sportsbook director Tony DiTommaso said. “We did no business to the Jaguars-Jets game. But it still did far more business than (the World Series and Knights game).”