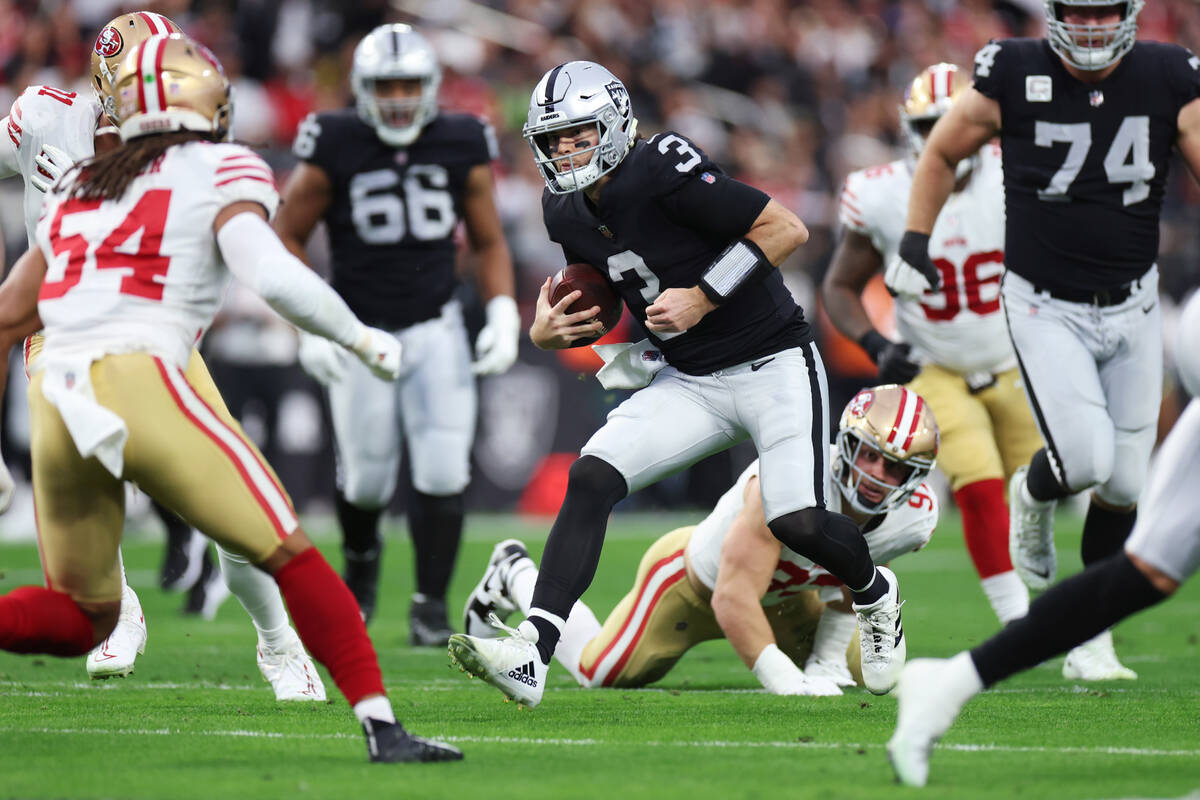 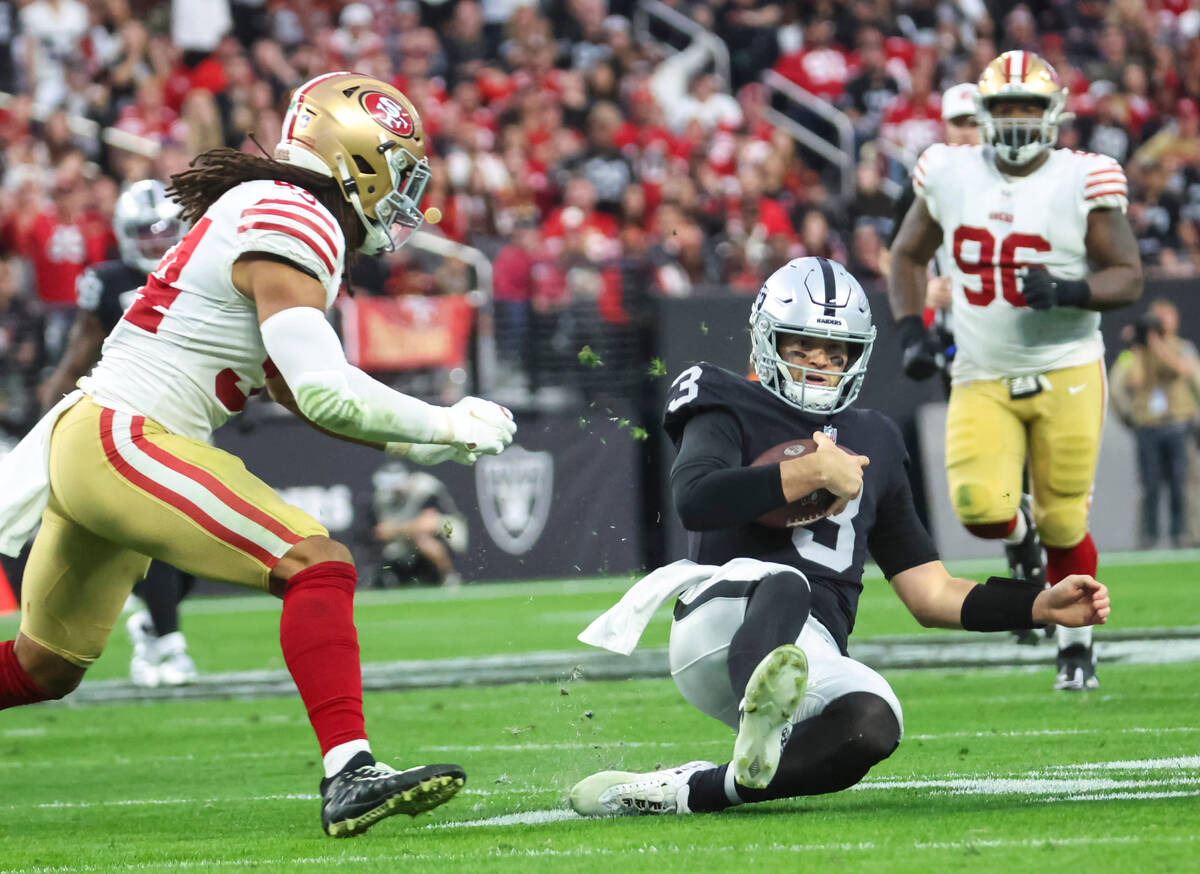 Raiders quarterback Jarrett Stidham (3) slides with the ball during the first half of an NFL game against the San Francisco 49ers at Allegiant Stadium on Sunday, Jan. 1, 2023, in Las Vegas. (Chase Stevens/Las Vegas Review-Journal) @csstevensphoto 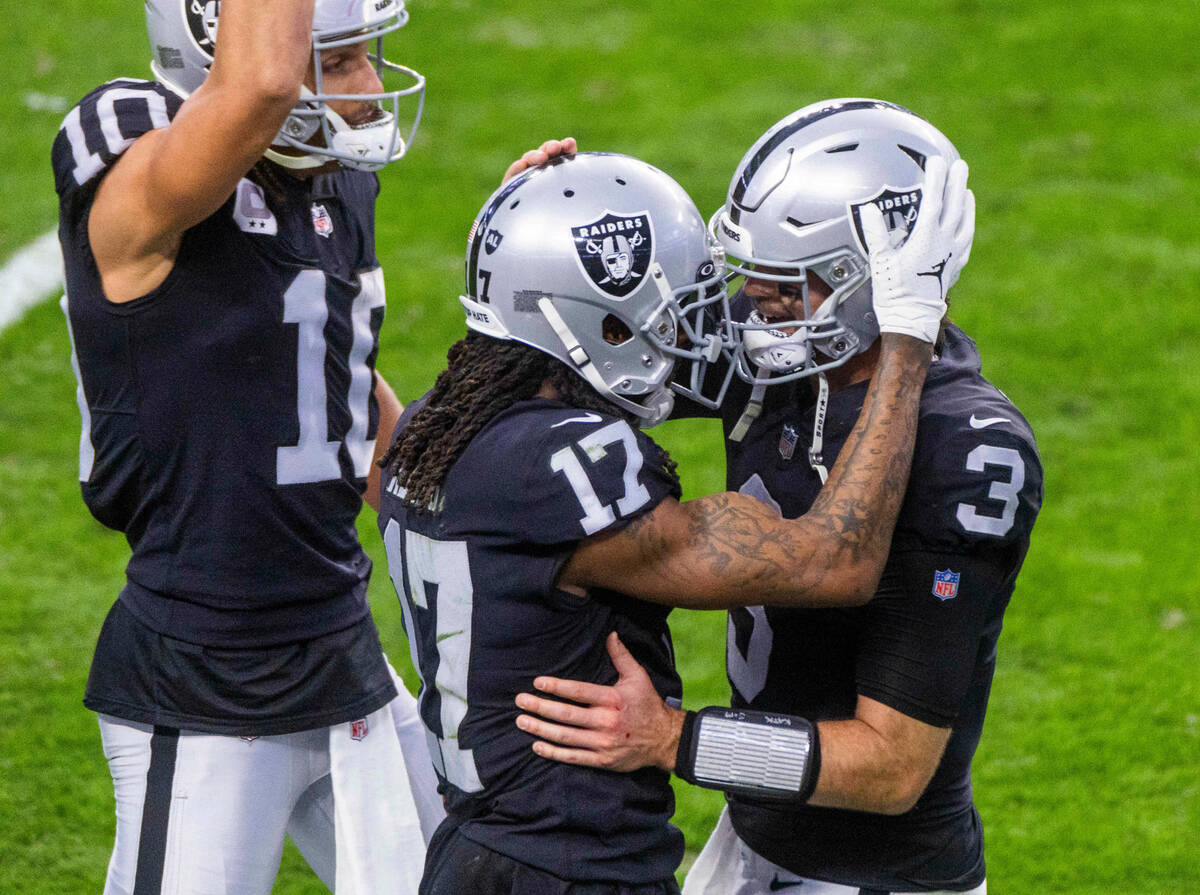 Raiders quarterback Jarrett Stidham (3) celebrates a touchdown with teammate wide receiver Davante Adams (17) versus the San Francisco 49ers during the first half of their NFL game at Allegiant Stadium on Sunday, Jan. 1, 2023, in Las Vegas. (L.E. Baskow/Las Vegas Review-Journal) @Left_Eye_Images 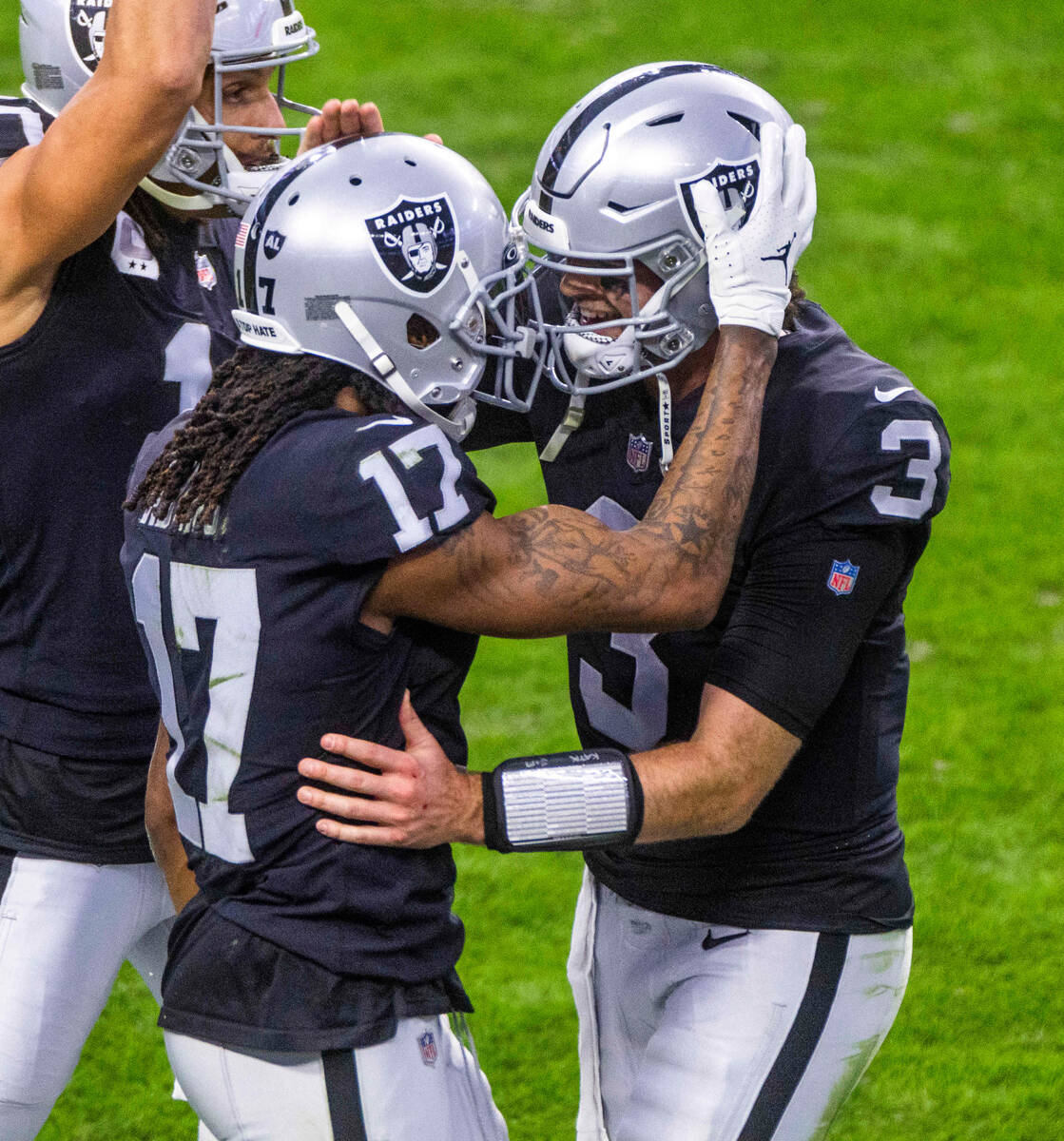 Raiders quarterback Jarrett Stidham (3) celebrates a touchdown with teammate wide receiver Davante Adams (17) versus the San Francisco 49ers during the first half of their NFL game at Allegiant Stadium on Sunday, Jan. 1, 2023, in Las Vegas. (L.E. Baskow/Las Vegas Review-Journal) @Left_Eye_Images

It’s a new year. But it’s the same old Raiders.

They became the first team in NFL history to lose five games in a season in which they blew a double-digit lead in the second half in a 37-34 overtime defeat to the 49ers on New Year’s Day at Allegiant Stadium.

Silver and Black backers cashed their tickets as 9½-point underdogs. But the vast majority of the money was on San Francisco, which soared from a 5½-point favorite to -10 on Wednesday before the line settled at 9½ after reports that Derek Carr would be benched for the final two games and replaced by Jarrett Stidham.

Sportsbooks won on the game in one of the biggest decisions of NFL Week 17.

“The Raiders were huge for us,” Red Rock Resort sportsbook director Chuck Esposito said. “It seemed like every large bet we had at the window was on the Niners.”

Stidham threw for 365 yards and three touchdowns, including a 60-yard pass to Davante Adams that put the Raiders ahead 24-14 early in the second half. The Niners went ahead 34-27 with 2:17 left. But the Raiders tied it with 1:11 to go, and the game went to OT after Robbie Gould missed a 41-yard field goal as time expired.

Stidham threw his second interception in OT, and Tashaun Gipson returned it 56 yards to the Raiders’ 7, where San Francisco settled for Gould’s 23-yard field goal for its ninth straight win. But its 6-0 ATS streak ended.

“I thought the Raiders should’ve gone for two at the end of the game,” Esposito said. “If not for the fluky game with the Patriots, they might’ve lost six games with double-digit leads. Carr became the scapegoat, but that’s more coaching than one guy.”

The South Point lost on all four afternoon games.

“We needed the Niners, but if the Raiders could’ve won, it would’ve knocked out a lot of teasers and money-line parlays,” South Point sportsbook director Chris Andrews said.

The Packers delivered the biggest win for bettors, as they crushed the Vikings 41-17 as 3-point favorites at Lambeau Field.

“The Vikings were really, really bad for us,” Esposito said. “I haven’t been sold on the Vikings for weeks. I can easily see them getting beat in their first playoff game.”

Aaron Rodgers and Green Bay are now a win over Detroit in the regular-season finale from making the playoffs.

Bettors also cashed on Tom Brady and Tampa Bay as they clinched the NFC South title and covered as 3½-point favorites in a 30-24 comeback win over Carolina.

The Buccaneers trailed 21-10 in the fourth quarter before Brady threw two TD passes to Mike Evans, then scored on a 1-yard sneak with 1:58 left two plays after a Sam Darnold fumble.

“Everybody believes in the scripts,” Esposito said. “That the Packers are going to find their way in, and the same thing with Brady. As bad as they’ve been, nobody is going to want to play the Bucs or Packers in the postseason.”

“The Seattle game was probably the worst decision of the day. We just couldn’t attract Jets money,” Westgate SuperBook vice president Jay Kornegay said. ” But overall, it was a very good day for us.”

Bettors lost on both College Football Playoff semifinal games Saturday at South Point, Station and BetMGM as both underdogs covered.

The Westgate lost on the semifinal shootouts.

“We did good on the first game with TCU winning. But we lost more on the second game than we won on the first game,” Kornegay said. “The second game was such high volume. But the majority of that was Georgia on the money line and Ohio State plus the points. The only thing we didn’t need was for the Bulldogs to win between one and six. Unfortunately, it landed right there.