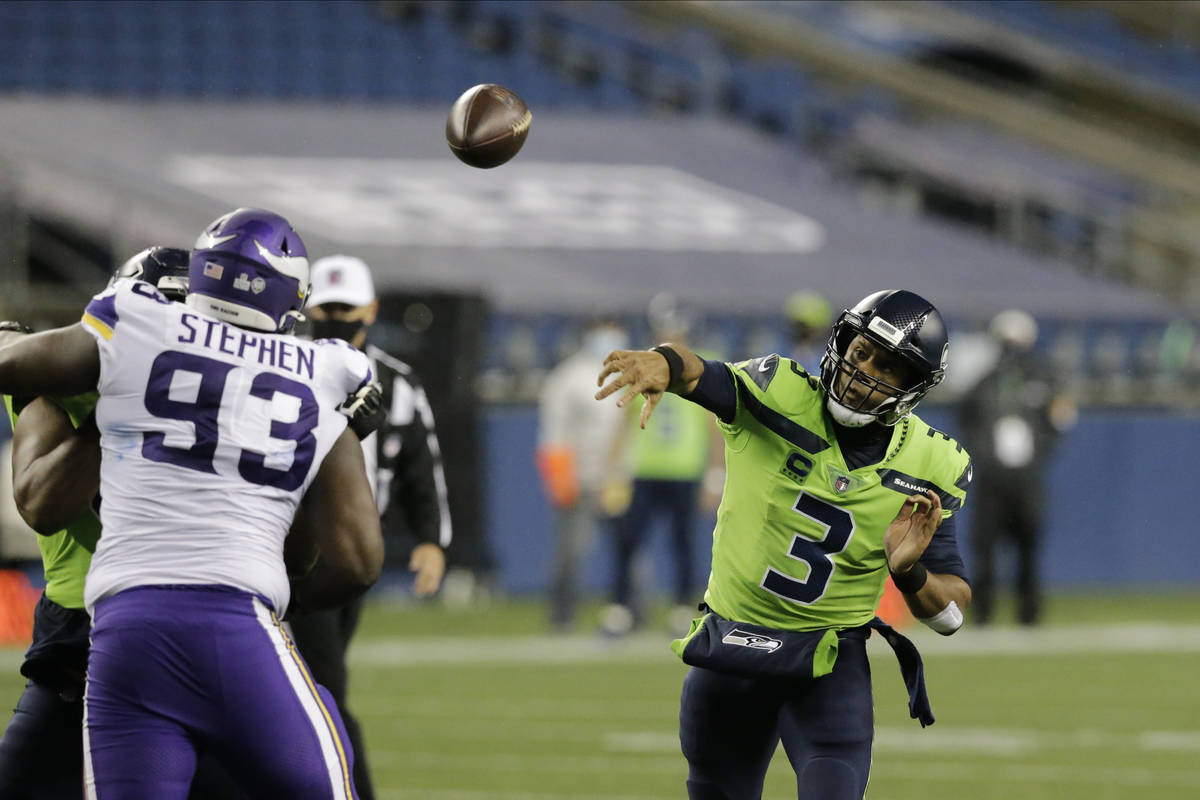 Seattle Seahawks quarterback Russell Wilson throws against the Minnesota Vikings during the second half of an NFL football game, Sunday, Oct. 11, 2020, in Seattle. (AP Photo/John Froschauer) 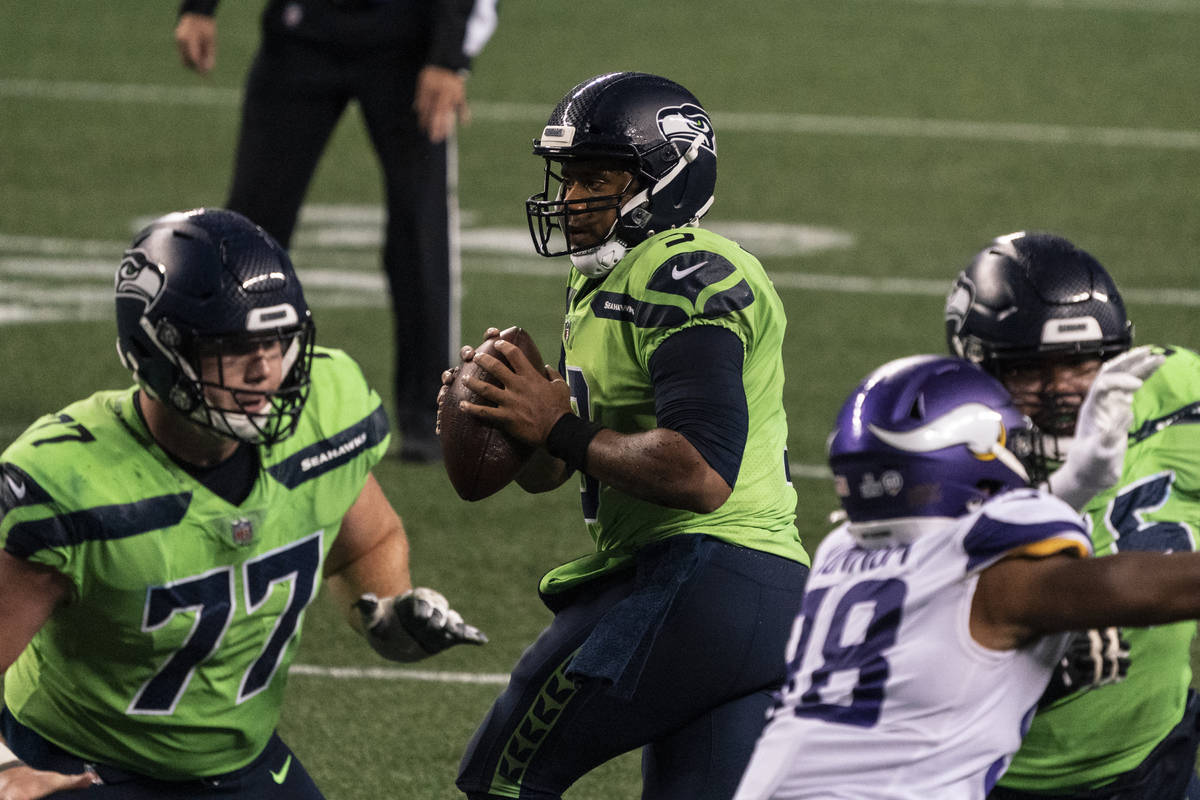 Seattle Seahawks quarterback Russell Wilson drops back to pass before throwing the game winning touchdown during the second half of an NFL football game against the Minnesota Vikings, Sunday, Oct. 11, 2020, in Seattle. The Seahawks won 27-26. (AP Photo/Stephen Brashear) 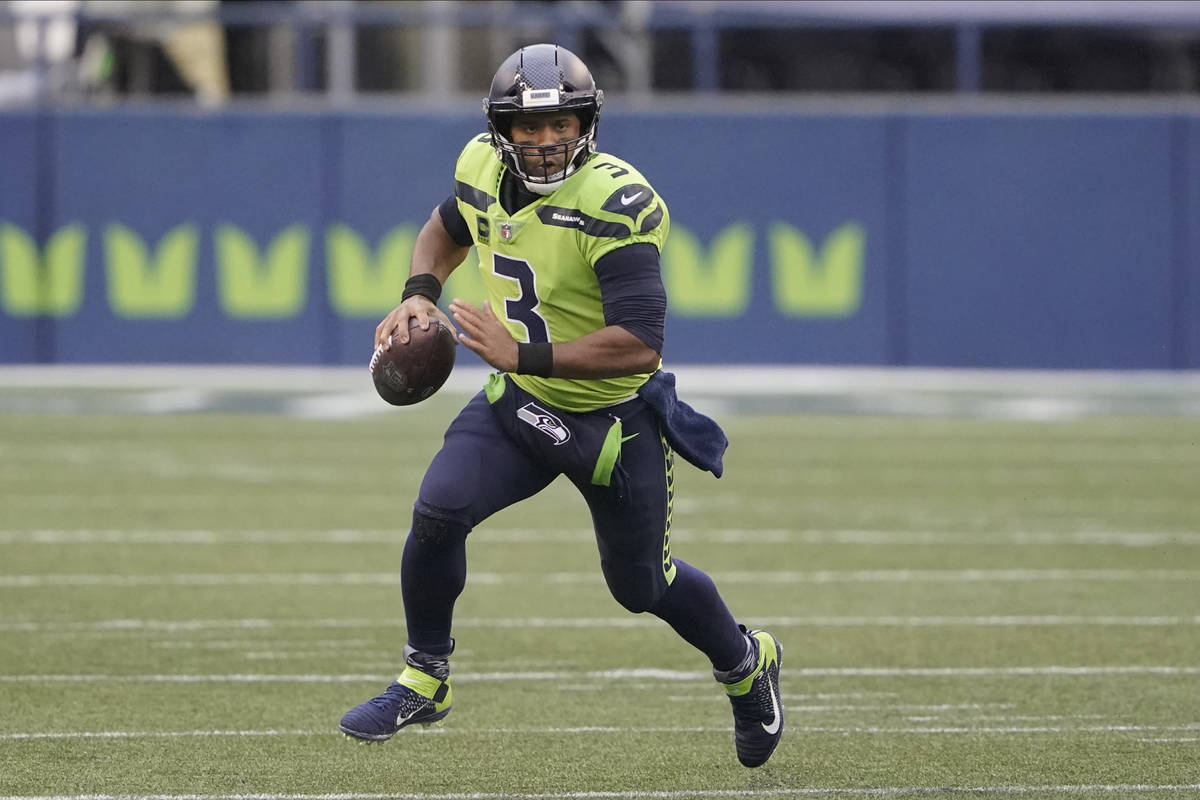 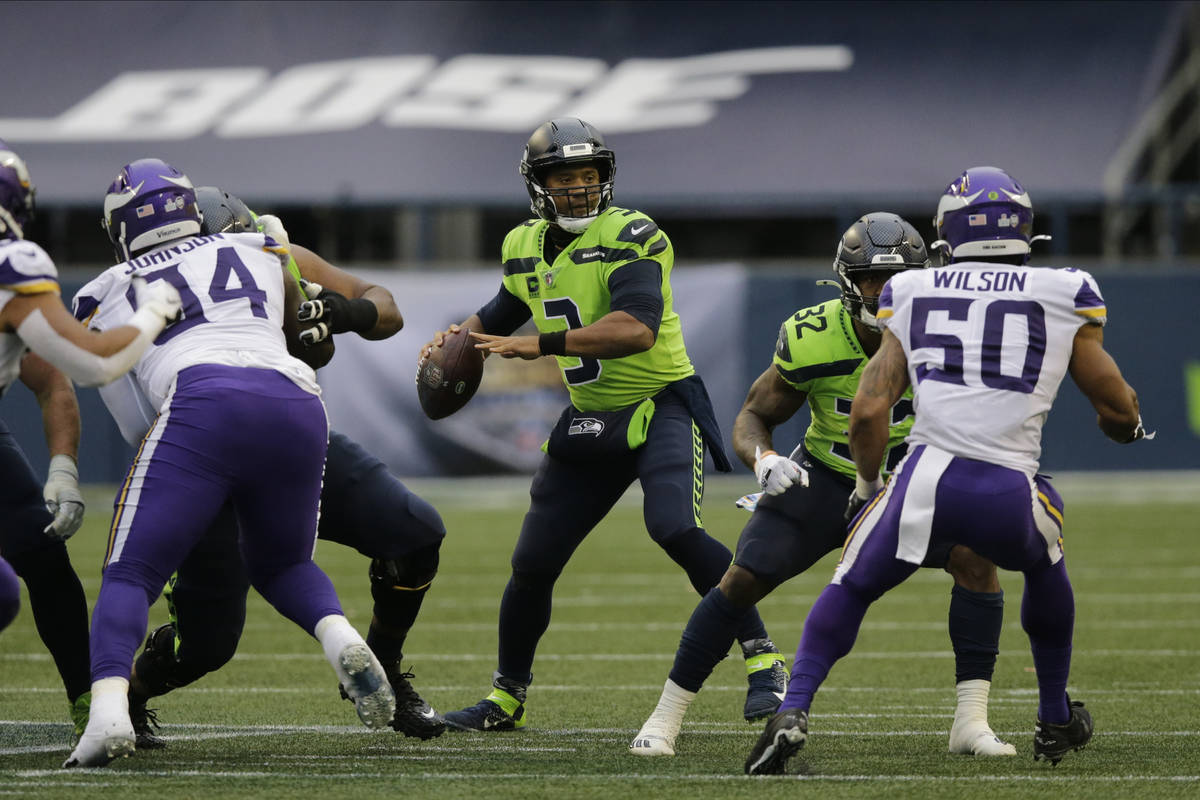 Seattle Seahawks quarterback Russell Wilson in action against the Minnesota Vikings during the first half of an NFL football game, Sunday, Oct. 11, 2020, in Seattle. (AP Photo/John Froschauer)

There are three undefeated teams in the NFL in the Seahawks, Steelers and Titans, who are each 5-0.

The Seahawks, led by -150 NFL MVP favorite Russell Wilson, are the 4-1 favorites at William Hill to win the Super Bowl and the +450 co-favorites with the Chiefs and Ravens at the Westgate.

“Arizona isn’t that good, but they’re perceived to be good because they beat up on a Dallas team that’s decimated by injuries,” Whitelaw said. “Seattle is in a way different class. It should beat Arizona pretty comfortably.

“I like teams coming off a bye, especially if the team and coaches are really good, like Seattle.”

Whitelaw called Tennessee’s win and cover over Houston last week in the Review-Journal and bet the Titans at +2 before oddsmakers made them favorites over the Steelers.

“Pittsburgh plays a little better at home, not that home means as much as it used to.”

“He was one of their better defenders,” Whitelaw said. “Losing him is not going to help with (NFL rushing leader) Derrick Henry.”

“The Lions have been playing a lot better,” he said. “I made the game a pick’em.”

Handicapper Doug Fitz went 4-1 ATS last week and is in second place in the RJ NFL Challenge with a 19-11 record. He likes Jacksonville to cover at Los Angeles.

“This is mainly a fade against the Chargers,” said Fitz (Systemplays.com). “As a favorite under coach Anthony Lynn the last three seasons, they’re only 9-13 ATS and 6-10 ATS when laying between 3½ and 9½.

“What it basically comes down to is they’re a terrible favorite, and Lynn makes some very questionable in-game decisions.”

Handicapper Dana Lane leads the RJ College Football Challenge with a 22-7-1 ATS record (75.8 percent). He likes the Vols to stay within three touchdowns of the Crimson Tide.

“I’m looking for a letdown spot for Alabama after their impressive (41-24) win against Georgia,” said Lane (@DanaLaneSports). “Tennessee will be able to move the ball against a Tide defense ranked just 61st of 77 teams.

“If (Vols receiver) Josh Palmer has a big day and Tennessee limits their mistakes, I’m confident that they’ll catch Alabama sleepwalking through this one.”

Handicapper Paul Stone is in second place in the RJ Challenge with a 20-9-1 ATS record (69 percent). He likes the Hoosiers and Nittany Lions to go over the total, as the Big Ten opens its season. The last four meetings totaled 61, 61, 59 and 76 points.

“This is my favorite pick of the week,” said Stone (@PaulStoneSports). “Indiana returns the nucleus of an outstanding offense, especially at the skill positions. They’ve shown the ability to score on virtually anyone, and this Penn State defense is probably not as good as it was the last two years.

“One thing that really makes this attractive is under coach Tom Allen, Indiana still can’t stop the better teams on their schedule. They’re just not athletic enough defensively.”

Sharp bets at the Westgate are 13-10-2 ATS in the RJ. Here are this week’s sharp plays, courtesy of Westgate sportsbook director John Murray: Wisconsin (-19) over Illinois; Rice (-3) over Middle Tennessee State; Georgia Tech (+4) over Boston College; and Florida Atlantic (+16½) over Marshall.

“That’s a huge revenge game,” he said. “I think Wisconsin will absolutely just smash them.”

“Wiseguys have been betting against Middle Tennessee in every game all year,” he said. “This team’s awful.”