Mbacke Diong quickly earned the nickname “Mblocky” for his defensive abilities, and it was that skill that earned him crunch-time minutes for UNLV last season as an incoming freshman.

At the time, offense was more of an afterthought.

Not as much anymore. Diong still is a defense-first post player, but his offensive game has improved noticeably, having increased his scoring average from 2.1 points to 8.5.

“For all the hours that we can work with him (in the offseason), he got in every single one of them, and then he would stay after,” UNLV coach Marvin Menzies said. “We would give him specific things to develop in the areas that we saw the most weaknesses and then give him some areas we felt he was good at already, but continue to refine those with some different drills. 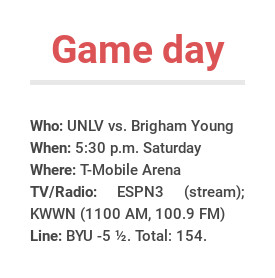 “But at the end of the day, he just worked, and he’s one of those guys you know is going to get better because he didn’t grow up playing basketball.”

Diong hopes to help UNLV (4-4) end a three-game losing streak when the Rebels meet Brigham Young (8-4) at 5:30 p.m. Saturday at T-Mobile Arena. The game, which will be streamed on ESPN3, is part of the Coaches vs. Cancer series and precedes the Louisiana State-Saint Mary’s matchup.

Menzies showed his confidence in the 6-foot 11-inch Diong when he inserted him late in games last as a defensive replacement for the more offensive-minded Brandon McCoy. To sit McCoy, a McDonald’s All-American, spoke to concerns about his defensive liabilities, and Diong justified the substitution decisions with strong interior play.

“Someone once said a great defender can be in two places at once, and he has some of that in his fiber just in terms of being able to stunt, fake and get back and create a little havoc for the ballhandler even if you’re not guarding the ballhandler,” Menzies said.

Now Diong is no longer a player counted on in just specific situations. He is a full-time starter, and comes off his first career double-double —13 points and 13 rebounds — last Saturday at Illinois.

His average playing time has increased from 9.2 minutes last season to 24.9. Diong averages 6.4 rebounds and has 17 blocked shots and eight steals in eight games.

Getting minutes in his first season was valuable, he said.

“It was a good experience for me to see how college is different from high school,” Diong said. “It really helped me to grow as a player. The teams we played last year, we’re going to play them again in conference. I tried to learn more (so) I’d be more efficient on the court.”

It’s on the defensive end that Diong tries to set the tone each game, with either a big blocked shot or a defensive rebound to facilitate a fast break.

The dunks don’t hurt, either, and his shooting percentage went from 55 last season to 68.4.

“I need to play ‘D’ so that my offense can come along,” Diong said. “Defense is what I like to do. That’s me. That’s Mbacke.”