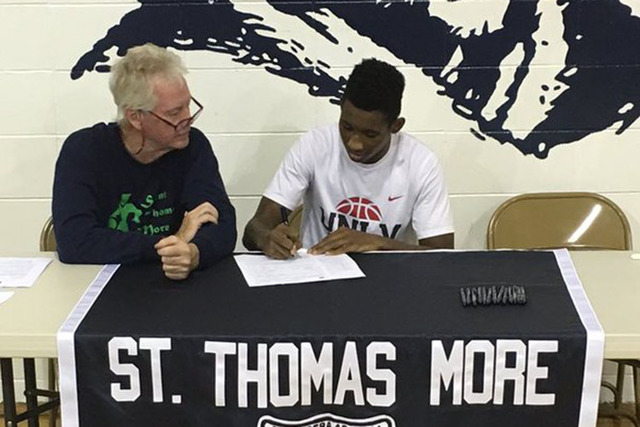 Christin Vital signs a scholarship paper in this photo from Twitter. He has since decided to open his recruitment. (Twitter/I_AMCV)

Christian Vital confirmed in a Twitter direct message Wednesday that he decided to open his recruiting process because of the Rebels’ coaching change and that he did not sign a letter of intent in November.

Vital, a 6-foot 2-inch, 175-pound guard at St. Thomas More School in Oakdale, Connecticut, had chosen the Rebels over Dayton. He is a three-star prospect, according to the composite rankings at 247Sports.com.

Vital signed a scholarship paper rather than a letter of intent, which allowed then-Rebels coach Dave Rice to comment on him. But it also allowed Vital to walk away from his commitment without penalty.

He was one of four members of UNLV’s class, and the status of the other three is unclear.

One of the concerns at UNLV when Rice was fired in early January was whether it could hold together its class. One of those recruits, Findlay Prep’s Carlos Johnson, provided hope that would happen when he tweeted a message after the news broke of Vital’s departure.

“We still strong,” Johnson tweeted, and he included the hashtag “UNLVmbb.”

Johnson, a 6-4, 220-pound forward, is part of a class that includes 6-2, 175-pound guard Jaylen Fisher from Bolton High School in Memphis, Tenn., and Justin Jackson, a 6-9, 220-pound forward from The Hill Academy near Toronto.

Fisher and Jackson still show themselves as UNLV’s commitments on their Twitter accounts, and Fisher in particular has been posting pro-Rebels tweets.