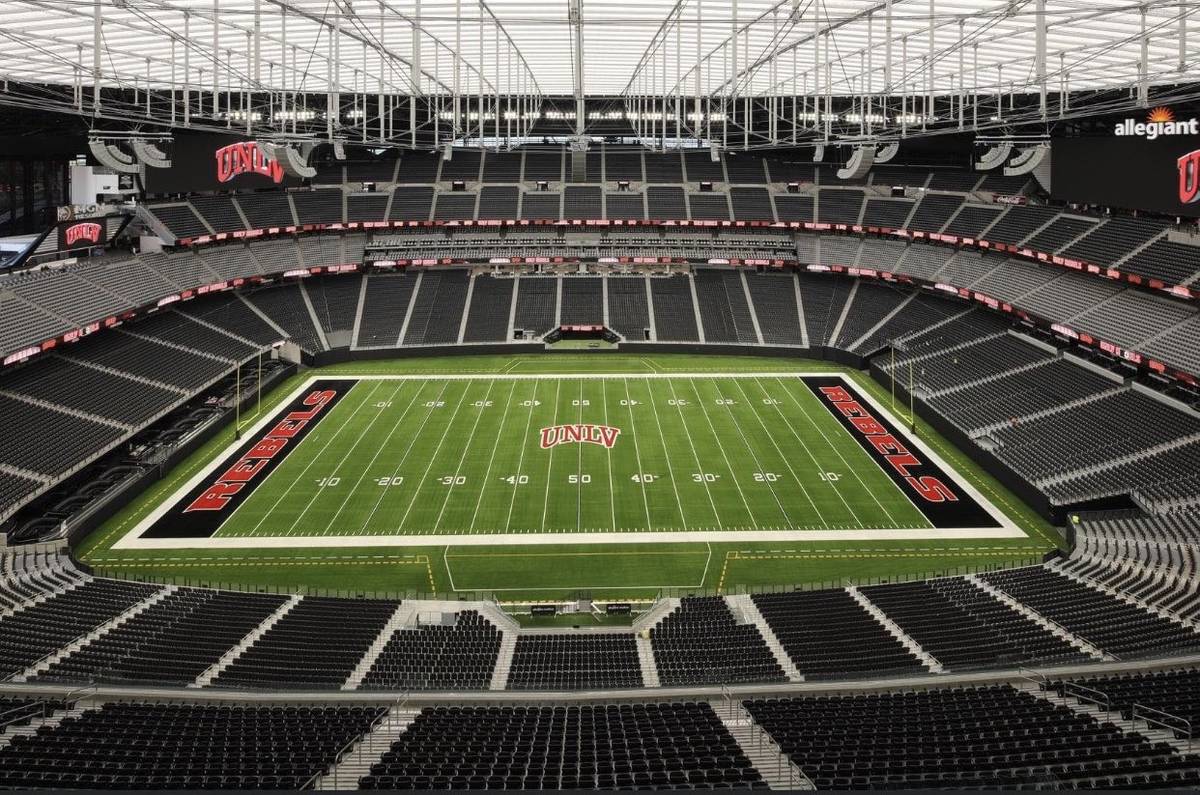 UNLV still awaiting decision on if a limited number of fans will be allowed to attend football games at Allegiant Stadium this season. (UNLV Athletics)

Ten days out from the inaugural UNLV football game at Allegiant Stadium, it’s still up in the air whether fans will be allowed to attend.

The Rebels are set to face in-state rival UNR on Oct. 31 in the battle for the Fremont Cannon, and the school is aiming to host a reduced-capacity crowd that would be the first to fill any of the 65,000 seats at the recently completed $2 billion stadium. The Raiders opted not to allow fans at their home games this season.

Under the state directive, event organizers must submit their plan for venues of 2,500 fixed seats or larger where up to 10 percent capacity is allowed. In Allegiant Stadium’s case, that would equal 6,500 people.

UNLV submitted its large-gathering venue plan to Clark County, which is working with the Southern Nevada Health District, and the state Department of Business and Industry, looking to allow 6,150 fans. That number doesn’t include game day staff, stadium employees and media members.

Clark County and the state confirmed they received UNLV’s plan and are reviewing it.

“If we have the opportunity to have fans, we will be prepared,” said Andy Grossman, UNLV athletics spokesman. “We have been in continual communication with local health and state officials throughout this process.”

If the plan is approved, it appears that general admission tickets might be tough to come by as tickets will be available on a single-game basis, with student-athletes’ families and UNLV students getting priority, according to Grossman.

After students and players’ families secure their tickets, any remaining tickets would be open first to Rebel Athletic Fund members, including UNLV football season ticket holders, based on their priority points. UNLV said it sold 7,460 season tickets for the 2020 season.

While UNLV and its faithful play the waiting game, it’s unclear when the decisions could be made on the state and county level, even though Clark County’s large-gathering venue plan guidelines state the initial review process would be completed within seven business days.

“I don’t have a timeline yet on when approval may be forthcoming,” said Erik Pappa, Clark County spokesman.