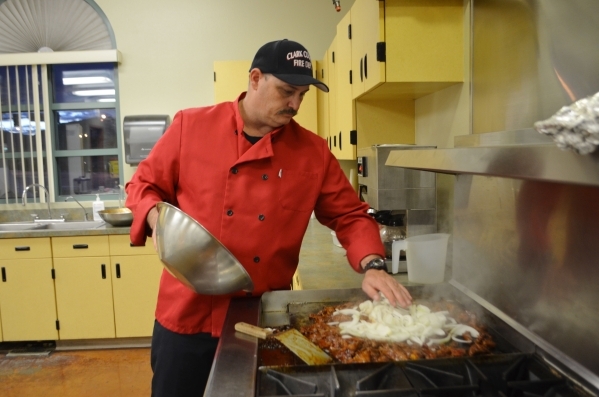 Aaron Smith wears a chef‘s jacket when he cooks at Clark County Fire Department Station 65. "It‘s not required, but over the years I‘ve ruined enough T-shirts to make a quilt," he said. Ginger Meurer/Special to View 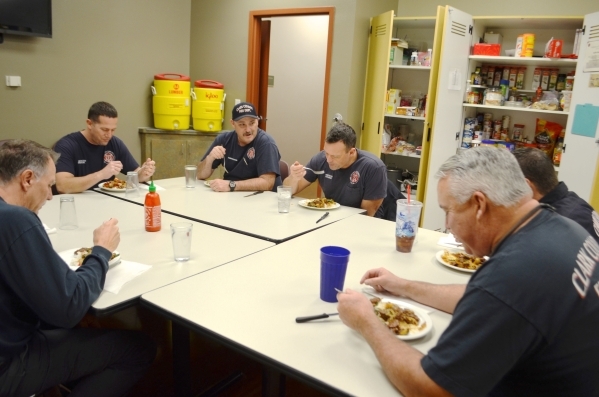 Aaron Smith shares a story with his crew in Brigade A at Clark County Fire Department Station 65 Jan. 8. Ginger Meurer/Special to View 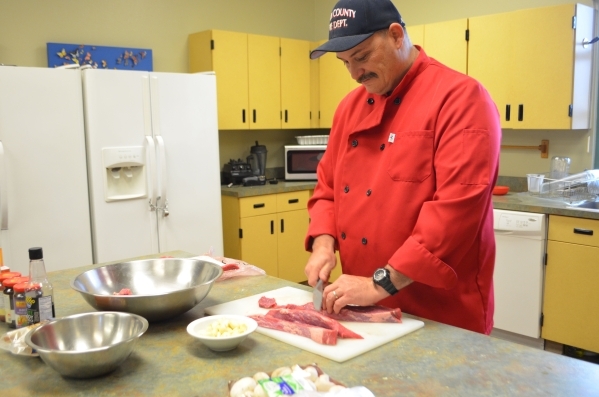 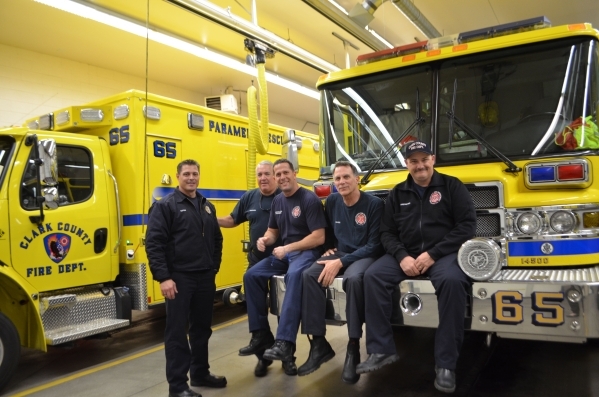 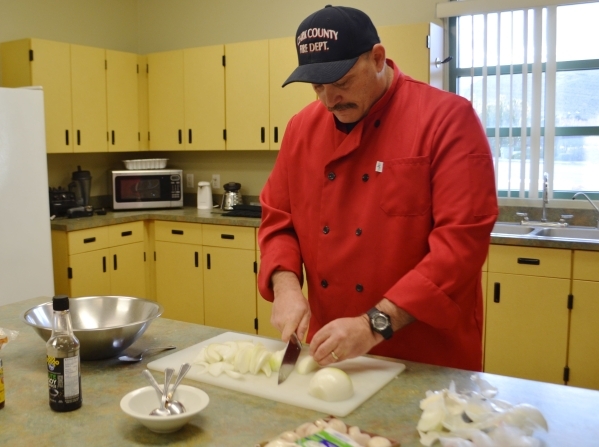 Aaron Smith chops onions at Clark County Fire Department Station 65 Jan. 8. Smith said he‘s heard plenty of advice on how to keep from crying while cutting onions from holding a piece of bread in your mouth to cures involving chicken feet, and nothing works. Ginger Meurer/Special to View 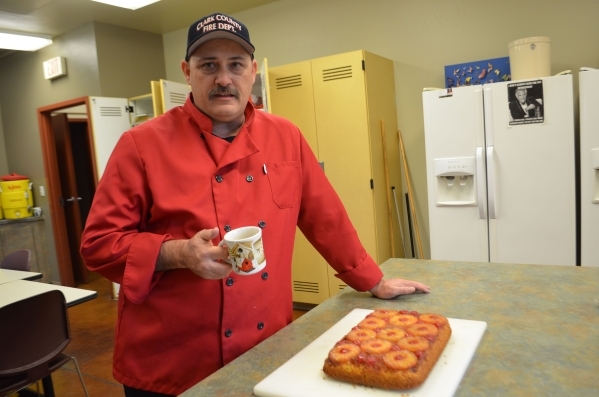 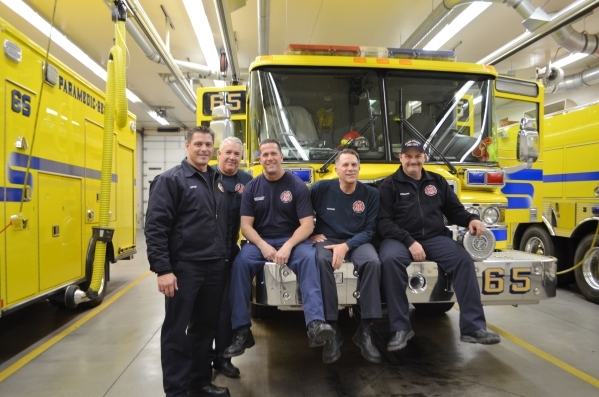 Everyone knows firefighters have to be strong, smart, resilient and skilled with equipment. What many don’t realize is that a firefighter’s equipment includes brooms, mops, washing machines — and perhaps most important — pots, pans and ovens.

At Clark County Fire Department Station 65, 3825 W. Starr Ave., in Southern Highlands, a firefighter works 24-hour shifts every other day for five shifts and then gets six days off. There is no cleaning crew or in-house chef — the firefighters do it all. At a lot of stations, firefighters will take turns at the stove, or the job will fall to rookies. But seasoned firefighter Aaron Smith serves as Brigade A’s chief chef.

Cooking for a crowd isn’t on the lesson list in firefighting academies, but Capt. Tony Tanara said it’s something most pick up on the job.

“Everybody who has been out for awhile has at least a few good recipes,” Tanara said. “If you can’t make a few good meals as a firefighter, you’re in trouble. They’ll let you know.”

Smith said cooking for a crew isn’t as intimidating as it sounds.

“People don’t know it, but cooking for large groups is actually fairly easy,” he said. “The bigger, the better — it’s easier. Because you can buy lots of ingredients.”

Each firefighter contributes around $10 a day to a “chow fund,” so a bigger crew means there’s more money to work with.

Smith said his crew shops for supplies at the beginning of every shift. That way, the food is fresh, they know who is on the schedule that day, and they get a feel for what everyone is in the mood to eat.

They usually stick to the same nearby grocery store because the staff there is ready to stow their cart in a cooler in the event the firefighters are sent out on a call.

“The fire department is getting healthier, believe it or not,” Smith said. “When I came on the job, they used to eat a lot of fried foods and things, but now it’s not so much the case anymore. We tend to eat lots of chicken, and there’s more baking, not as much frying.”

Smith said he gets by using tips and tricks.

“There’s a simple rule to follow: Try to have a meat and two veg, and remember the rule is half a pound of meat per man at each meal,” he said. “And then always make enough to where there’s leftovers. Because if you don’t, there will be hell to pay.”

“The thing with firefighters is just to make enough,” agreed Rick Szczepanek. “We had a brand new rookie, feeding six guys at (Station) 14; he had half a chicken breast per grown man.”

“Firemen are not normal eaters,” Smith said. “Also, everything that’s leftover can go in eggs the next day. We are notorious for after fires, in the middle of the night, we start snacking. So, if you’ve got leftovers, it’s good.”

On a recent Friday evening, Smith put together a pineapple upside down cake and Mongolian beef, a dish he picked up from another firefighter. All measurements are approximate, as Smith doesn’t use measuring cups. He pours dashes and dollops of ingredients straight from jars and keeps a stack of spoons at his side to taste test as he goes.

To feed six firefighters, he started with two tri-tip roasts, thinly sliced with a knife he brought from home, “because they never seem to stay sharp here.” To that he added 10 cloves of minced garlic. Then, in a separate bowl, he whipped up a sauce with a half cup each of chili garlic sauce, black bean garlic sauce, and water; a quarter cup of hoisin sauce; a third cup of light soy sauce; two tablespoons of sesame oil; one heaping tablespoon of cornstarch; one heaping tablespoon of baking soda; and a fireman-sized handful of brown sugar.

Smith combines the sauce and the meat and leaves it to marinate for an hour or two.

“It seems like a lot of marinade, but you want it to be all marinade-y,” he said.

Using the grill on the giant commercial stove in the firehouse, Smith browned the beef and garlic and then added two chopped white onions and then just the green tops from two bunches of green onions. The whole cooking process takes about 20 to 25 minutes. Once it’s done, he serves it on top of rice.

Smith’s dish was delayed by an emergency call, but it wasn’t interrupted. That’s rarely the case.

“You have to be ready to bolt,” he said. “Not to sound cheesy, but we’re always on the go.”

Thanks to the realities of the fire station, there are some things Smith doesn’t dare cook, with from-scratch pasta topping the list. But almost anything else he manages.

“Everything you have onboard on the stove, you have to be able to shut it off in a heartbeat,” he said. “But that’s the life of a firefighter, and the guys understand that.”

Once the food is done, the crew helps set the table and dives into the food and conversation.

“Because it is like a family here, we all sit down to dinner, and we all have food together. That’s part of the fraternity that is us,” Smith said.

Spilotro told a story about a rookie cooking for a crew of 30 who didn’t have a spoon long enough to stir to the bottom of the pot. The top couple of inches of American chop suey were edible, but the rest had the crew dropping forks and the captain demanding someone to go outside and “find some dog (feces)” to help him get the taste out of his mouth.

Johnson recalled a rookie who poured apple sauce over pork chops and tossed them in the oven for 45 minutes.

“That was the best dinner I’ve ever been to with the worst food,” he said. “Everyone grilled that kid.”

Tanara walked into a kitchen in commotion once to find a firefighter planning to serve fettuccine Alfredo with a sauce so lumpy it looked like mashed potatoes. Most stations keep emergency pizza money on hand for disasters like that.

Even culinary foodies have failures. Szczepanek told a story about a firefighter who blew the entire day’s chow fund on a single $100 salad. Fancy lettuce isn’t enough to impress.

Despite the grief they give each other over burned or bungled meals, Smith said, as a firefighter, “you get pretty tight with your crew,” and meals are part of that.