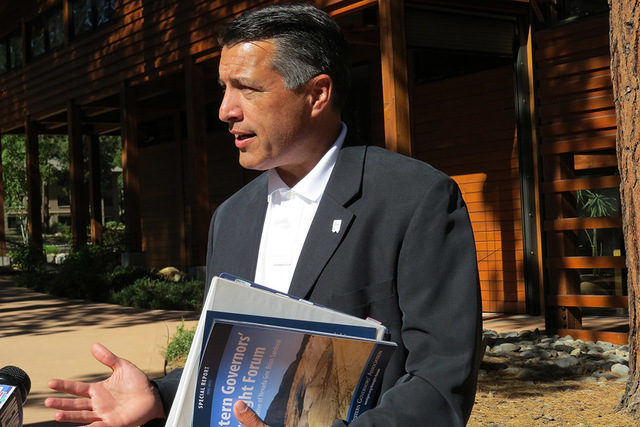 Gov. Brian Sandoval came out against a Nevada background check initiative that’s being supported by gun control advocates on the ballot in November.

An aide to the Republican governor said Thursday that Sandoval is concerned the measure would unnecessarily restrict rights of law-abiding Nevadans.

“The governor does not support Question 1,” Sandoval spokeswoman Mari St. Martin said in a statement.

The statement said Sandoval wasn’t satisfied the measure addressed “the complex issue of keeping firearms out of the hands of criminals.”

The declaration from the Republican governor, who was a state attorney general and federal judge before being elected in 2010, drew praise from the National Rifle Association and criticism from initiative supporters.

NRA Nevadans for Freedom state director Robert Uithoven said his organization was excited the governor joined what Uithoven called a growing coalition against the measure. Uithoven said approval of the measure would cost Nevadans “time, money, and freedom.”

Initiative sponsor Nevadans for Background Checks accused Sandoval of siding with the gun lobby against what the group called a common-sense measure to save lives.

The pro-measure Brady Campaign to Prevent Gun Violence accused Sandoval of standing up for the right of “dangerous people” to “retain unfettered access to guns online and at gun shows.”

Dan Gross, Brady Campaign president in Washington, D.C., said Question 1 “would keep guns only out of the hands of the people we all agree shouldn’t have them.”

A yes vote would require background checks through a licensed gun dealer when most firearms change hands, except for temporary transfers of a weapon while hunting or target shooting, for immediate self-defense, and transfers between immediate family members. A licensed dealer would be allowed to charge a fee for a background check.

St. Martin cast Sandoval’s position as consistent with two laws passed by the Legislature and signed by the governor last year.

One, addressing free mental health background checks, prohibits a person from transferring a gun or ammunition “if they have reason to believe that another person” is a convicted felon or under criminal indictment, a fugitive, has been diagnosed as mentally ill, or is in the United States illegally.

The other made it a felony for a person convicted of domestic violence or who is under an extended protective order to possess or own a firearm.

The domestic violence and protective order provisions were part of a wider law hailed as a victory by the NRA that also extended from homes to vehicles the stand-your-ground right to use lethal force for self-defense.

The governor joins most of the state’s elected sheriffs and several state lawmakers in opposing the measure.

Both sides have been lining up endorsements, and the NRA this week launched an advertising campaign casting the Nov. 8 election as crucial to Americans’ gun rights.

She pointed to endorsements from the Nevada Association of Public Safety Officers, Las Vegas Fraternal Order of Police, Nevada State Education Association, Nevada Parent Teacher Association and The Latin Chamber of Commerce, and called Sandoval out of step with Nevada voters.

“Obviously, this is a political calculation,” Crowe said of Sandoval’s announcement. “It’s unfortunate that politics trumps policy when background checks are a proven method to curb gun violence and save lives.”