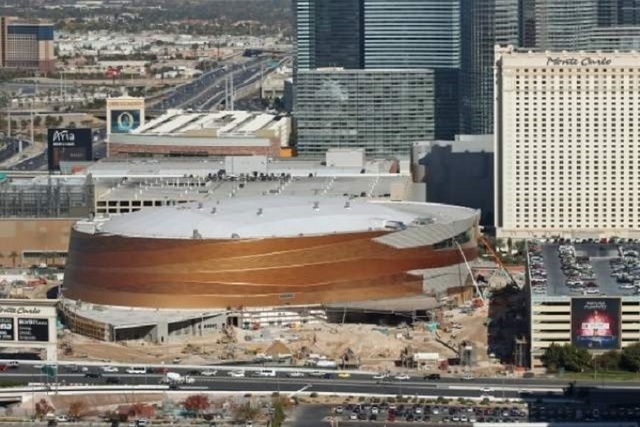 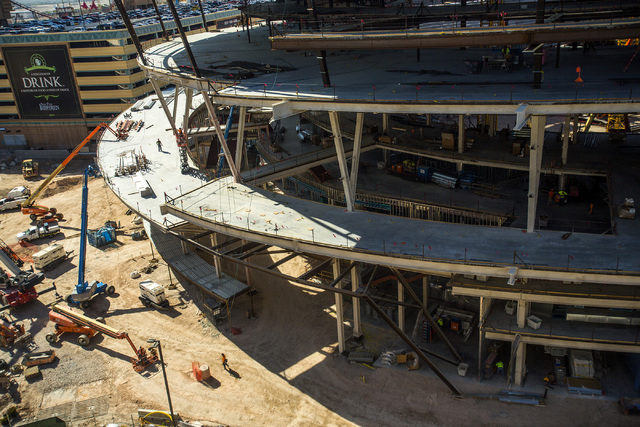 Las Vegas hasn’t seen a major stadium or arena built in more than three decades, which makes the $375 million venue being built by the MGM Resorts International-Anschutz Entertainment Group partnership a very big deal. Construction behind New York-New York on the Strip has moved along on schedule after the May 1, 2014 groundbreaking.

Here are 10 cool things about the building, which opens in April:

1. Premium seating will be an attraction, and improvements to the luxury-seat options bumped up the arena’s construction cost by $25 million. Arena suite users will be able to take a fifth-level pedestrian bridge from New York-New York’s parking garage right to the arena’s suite level without entering the main concourse. Premium seating includes 44 luxury suites, eight event-level bunker suites and two large clubs that require a $3,500 to $5,000 membership.

2. A tree-filled park on Las Vegas Boulevard will lead visitors approaching on foot from the Strip to a large plaza in front of the arena. The park between New York-New York and Monte Carlo will feature food options and restaurants such as California Pizza Kitchen. It also fits MGM Resorts International’s strategy of giving Strip visitors more outdoor options, including two festival sites on the Strip.

3. Fans sitting in the arena’s upper bowl should still get a good look at the action because there is only one level of suites. In other arenas, two or even three levels of suites and luxury seating push the upper bowl higher and further from the action.

4. The plaza, named for electronics giant Toshiba under a corporate sponsorship deal, will be a pre-game entertainment destination with outdoor stages for live acts.

5. T-Mobile is rumored to have landed the arena naming rights, but company officials are not commenting. Talk of Las Vegas-based Ultimate Fighting Championship buying the name appears to have gone nowhere.

6. Emphasis on outdoor terrace and balcony space. For example, four “terraces” at the front of the building can be public space or rented out for pregame and postgame events or to give a view of Toshiba Plaza events. They hold about 100-125 people each. Three “balconies” on different levels on the north side of the building provide outdoor space and smoking areas.

7. A large glass facade and LED media board to greet visitors at the arena’s front entrance. The glass facade is about 175 feet wide by about 70 feet tall. More relevant is the 175-by-45-foot section at the top (and the full width) that will be covered by LED media mesh. That will allow the arena to engage guests on Toshiba Plaza and show movie premieres and allow watch parties for sports and other big events.

8. Having Toshiba as an arena founding sponsor and the plaza sponsor means the Tokyo-based company will use its next-generation “audience measurement” technology to analyze visitor gender and age and then digest facial images to generate digital ads, music and food selections tailored to fit the crowd’s demographic composition. The arena’s cameras will even measure “dwell time” — a measure of an ad’s effectiveness based on how long a fan looks at a video screen in the arena.

9. U.S. sports venues are rarely built without squabbles over public funding, but this one is privately financed by MGM Resorts/AEG without an iota of public outcry. MGM and AEG each brought $75 million in cash to the table, for $150 million in equity. That means MGM and AEG will pay off $225 million in debt, with Bank of America as the lead lender.

10. An outside company will serve as the food and beverage contractor. While some arenas have become almost like malls or airport terminals with lots of restaurants, there won’t be a sit-down restaurant in the Las Vegas arena because the city already offers myriad options. But expect a range from premium to staple food brands reflecting a wide range of customer taste.

Bill Foley, who is working to land a National Hockey League team in the new arena, named these three things as his favorite aspects of the venue:

“First, the seating arrangements for basic seats … have great views and are canted to be close to the Ice.

“Second, the bunker suites not only have behind-the-glass access, but an entire inside entertainment area directly across from the locker room.

“Third, the entertainment deck (for) pre- and postgame concerts and events directly in front of the arena. That will help make the venue an event rather than just a game that people go to and watch and then leave.”