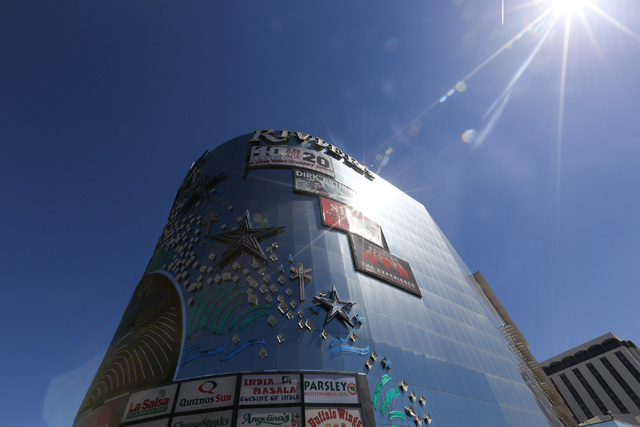 The Las Vegas Convention and Visitors Authority board of directors agreed to a plan on Tuesday, April 12, 2016, which will bring down the Riviera's two hotel towers in implosions this summer. (Brett Le Blanc/Las Vegas Review-Journal Follow @bleblancphoto0 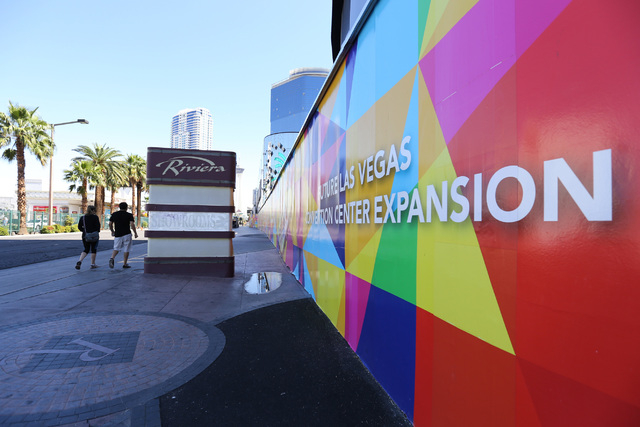 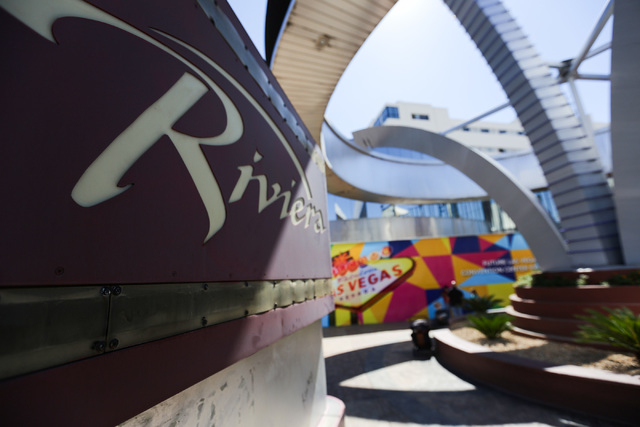 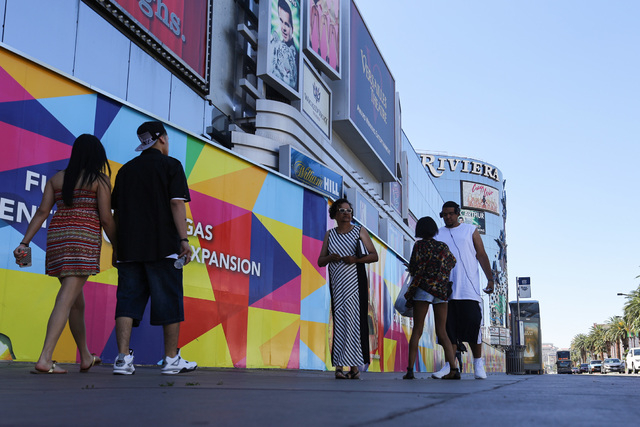 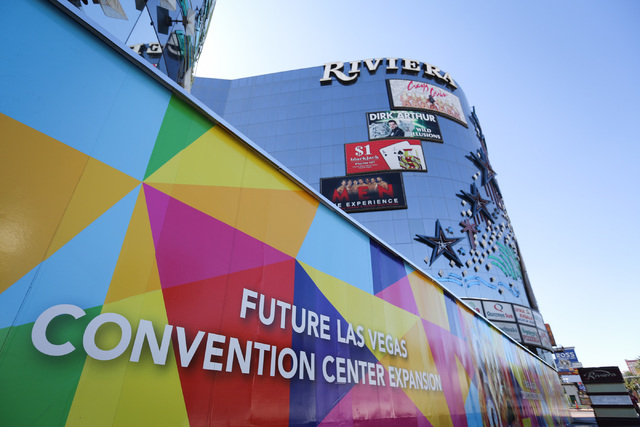 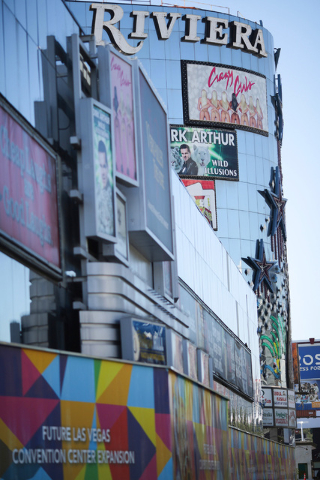 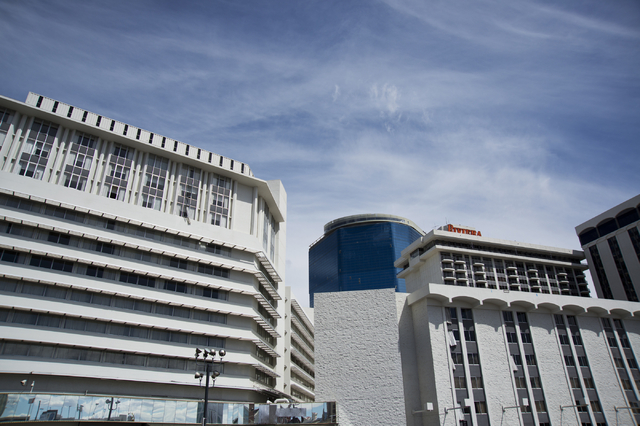 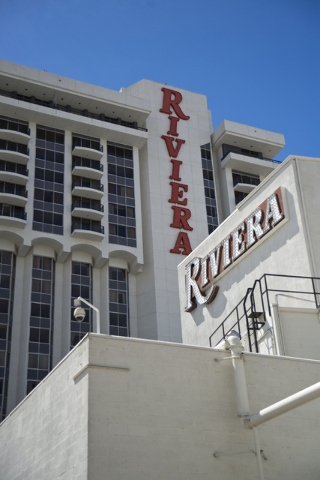 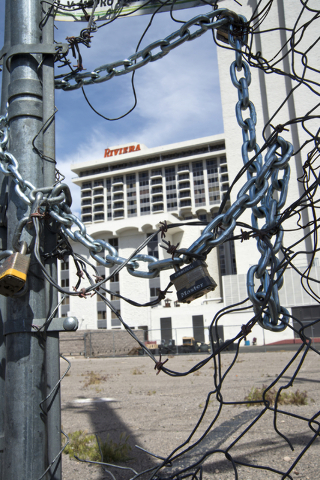 Chains and barbed wire block a hole in the fence at the site of the shuttered Riviera on the Las Vegas Strip on Tuesday, March 29, 2016. (Daniel Clark/Las Vegas Review-Journal Follow @DanJClarkPhoto) 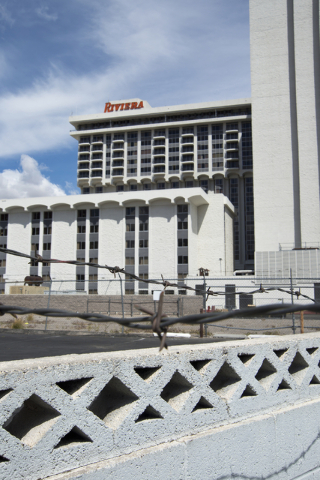 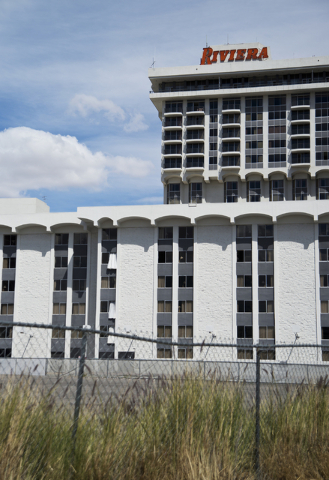 Two of the shuttered Riviera hotel towers will be brought down in high-profile implosion events this summer, the Las Vegas Convention and Visitors Authority board of directors agreed Tuesday.

In a unanimous vote, board members, acting on a recommendation from its Las Vegas Convention Center District committee, approved awarding a demolition contract to Las Vegas-based W.A. Richardson Builders LLC for $42 million.

Under the Richardson plan, the Monte Carlo and Monaco towers of the Riviera will be imploded in June and August after several of the other low-rise buildings are demolished with wrecking balls and bulldozers ahead of them.

Terry Miller, principal for Cordell Corp., the authority’s builder representative, said he would meet with Richardson officials Wednesday and work could begin as early as Friday. Miller said a detailed demolition schedule would be discussed and it’s expected that the LVCVA would provide details of implosion dates as soon as they have them.

Authority staff and board members view the dual implosions as an opportunity to call attention to the Las Vegas Convention Center expansion plan, which the LVCVA now will cost $1.4 billion. That doesn’t count $250 million the agency budgeted for acquiring the Riviera and future construction on the Riviera site that hasn’t been detailed. Previously, the LVCVA priced the whole package at $2.3 billion.

The board also approved amending a professional services agreement by adding $996,180 to the contract approved with Terracon Consultants. The contract amendment was expected as the company was asked to investigate the presence of hazardous materials prior to determining how much it would cost to remove it.

The cost of bringing the Riviera down climbed by $5 million because Cordell and Terracon determined that there is asbestos within the stucco finish of the Monte Carlo tower. As a result, Richardson workers will have to wrap the building in plastic and chisel away the finish and haul the debris away to prevent asbestos particles from becoming airborne during the planned implosion.

There also is asbestos in the buildings’ interiors that will have to be removed before the implosions can occur.

The Riviera demolition project will include bringing down the buildings, abating the asbestos, removing the debris and preparing the lot for outdoor exhibits and parking.

The Riviera grounds are adjacent to the Convention Center’s Gold Lot and will give the authority an extra 3,100 parking spaces that could either be used for additional vehicle parking or for outdoor exhibits.

Under the Cordell timeline, the demolition and debris removal will be completed by Dec. 31 and the property will be turned over to the authority by Jan. 31.

The authority must have the property available prior to the opening of ConExpo-Con/Ag, the giant construction industry show scheduled March 7-11.