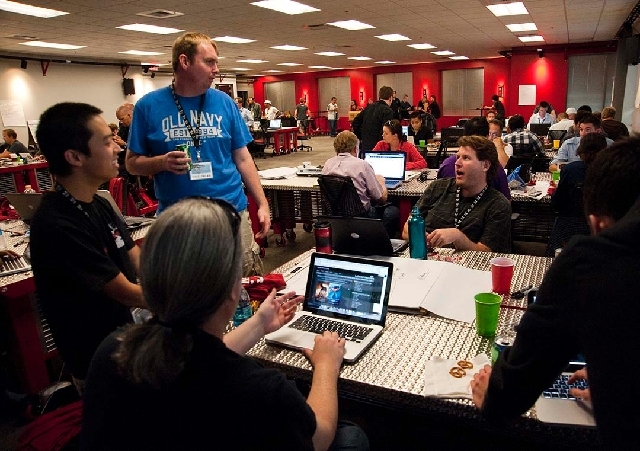 Aspiring entrepreneurs will have a high-profile judge to impress at the sixth Startup Weekend Vegas, a 54-hour event that challenges participants to envision and create a new business in three sessions.

Steve Case, AOL co-founder and chairman of Startup America, will judge the contest.

“It’s a big deal for us to have someone of his caliber taking the time to be a part of our community,” event organizer Adam Kramer said.

During that time, teams will transform ideas into viable businesses.

“When people come in Friday, they can only come in with an idea,” said Kramer, who heads the entrepreneurship and young professionals branch of the Las Vegas Metro Chamber of Commerce. Kramer leads the chamber’s JumpStart Vegas program, which seeks to make the city a startup capital.

On the Friday that Startup Weekend gets under way, participants are classified as business developers, designers or technical developers. Each person has 60 seconds to pitch an idea, then contestants vote on the 50 or so ideas and narrow them to 10 or 12.

Next the people who pitched the chosen ideas build their teams, and the rest of the weekend is used to develop.

The InNEVation Center is closed for eight hours between sessions so Startup Weekend isn’t officially a marathon, but Kramer said some teams find a different location and power through the night.

Saturday, coaches from various business backgrounds come in to advise the teams. This year coaches include local business people ranging from entrepreneurs to professors to lawyers, as well as former winners of Startup Weekend Vegas.

Thomas Knoll, whose product clippPR won the first Startup Weekend Vegas, will attend, as well as Devin Egan, a co-founder at LaunchKey, which won the fourth competition in July 2012. ClippPR tracks press and press engagement for businesses, and LaunchKey is an app that eliminates the need for passwords.

In Dec. 2012, LaunchKey received $750,000 in seed funding from the VegasTechFund, an investment branch of Downtown Project. It’s since grown its staff from three original co-founder to a team of five.

According to startupweekend.org, 36 percent of the startups created last at least three months. Eighty percent of team members leave the event with plans to continue working together.

Sunday, the final day of Startup Weekend Vegas, teams present five minute pitches and are judged on what they’ve built. Forty percent of their score, Kramer said, is their ability to execute.

The winning group receives a six-month membership to the InNEVation Center.

Although the businesses are typically tech businesses, a person doesn’t have to have a tech background to sign up.

Participants with the ideas don’t need to know coding. That’s part of the appeal — non-tecchies can bring their ideas and meet other people who are able to execute them.