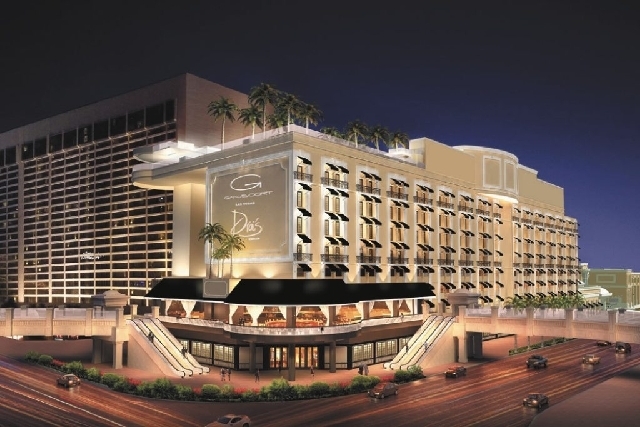 Caesars Entertainment Corp.’s abrupt exit from a $1 billion casino project in Boston has also prompted the company to drop the Gansevoort Hotel Group from the redevelopment of the Bill’s Gamblin’ Hall on the Strip.

The investor, a German businessman, is reputed to have ties to organized crime in Russia. Gansevoort is not involved in the Boston venture and was not expected to seek licensing by Nevada gaming regulators for the Strip project. The arraignment between Caesars and Gansevoort was strictly a licensing and marketing deal.

A Caesars spokesman confirmed Sunday that Gansevoort was being dropped from $185 million Strip project and a new name would be chosen.

Construction will continue on all aspects of the redevelopment, including turning Bill’s into a $185 million luxury hotel with 188 rooms, a 65,000 square-foot rooftop nightclub and pool area created by Victor Drai, and a restaurant from television cooking personality Giada De Laurentiis.

In an emailed statement through a company spokesman Sunday, Achenbaum said Massachusetts gaming regulators relied on an outdated item from a New York gossip column to reject Caesars Entertainment.

“We would have expected a serious government agency to act on the basis of substantiated fact, not rumor or innuendo previously printed in gossip columns,” Achenbaum said. “No new facts have arisen since we passed the internal gaming compliance process of Caesars prior to the execution of our agreements. We have worked diligently to create one of the projects of which we are most proud. However, in order to minimize any controversy for Caesars, we have agreed to end our role in the Las Vegas project. Gansevoort wishes Caesars and its team continued success.”

In a statement, Caesars, which is licensed in 13 states and operates 10 hotel-casinos on or near the Strip, said the Massachusetts Gaming Commission has set unreasonable standards for prospective developers.

“We believe the Commission is attempting to set standards of suitability that are arbitrary, unreasonable and inconsistent with those that exist in every other gaming jurisdiction, ” the company said in a statement. “Following discussions with our partners, and in light of the Commission’s approach as well as our minority stake in this project, Caesars has determined it is in the best interest of the company to focus on our 54 properties around the world as well as other growth opportunities.”

“Although we never gave any credit for the potential Boston project in our Caesars valuation, it is a clear disappointment,” Kempf told investors. “Still, we do not believe the actions taken by the Massachusetts Gaming Commission will affect other development projects or existing licenses.”

The withdrawal comes a few weeks ahead of a public vote on the proposal.

Suffolk Downs said it would find another casino operator for the project.

In an interview with Bloomberg News, Caesars Entertainment Chairman Gary Loveman said over the weekend the company did its own background checks on Gansevoort before entering into the licensing agreement with the hotel group, which operates boutique properties in New York City and the Caribbean. None of the company’s resorts have gaming.

“We certainly did not expect to have trouble,” Loveman said. Caesars also told Massachusetts regulators they would end the relationship, a remedy casino regulators often allow but not in this case, he said.

The move leaves Wynn Resorts Ltd. as the leading candidate for a single casino license to be granted in the Boston area. The Wynn proposal is on the Mystic River waterfront in Everett; The Foxwoods Indian tribe proposes a casino in Milford.

The state’s 2011 gambling law allows for a single resort-casino in Eastern Massachusetts. The Suffolk Downs and Caesars planned a casino, two hotels, restaurants and horse racing on the 163-acre site near Logan Airport.

The track announced a deal in late August with the city of Boston on details of the proposal. It called for $33.4 million in upfront payments and estimated $52 million in annual revenue for the city if the casino is built. The agreement also promised at least 2,500 construction jobs and 4,000 permanent jobs.

MGM Resorts International is bidding for the state’s only license in Western Massachusetts with an $800 million proposal in Springfield.