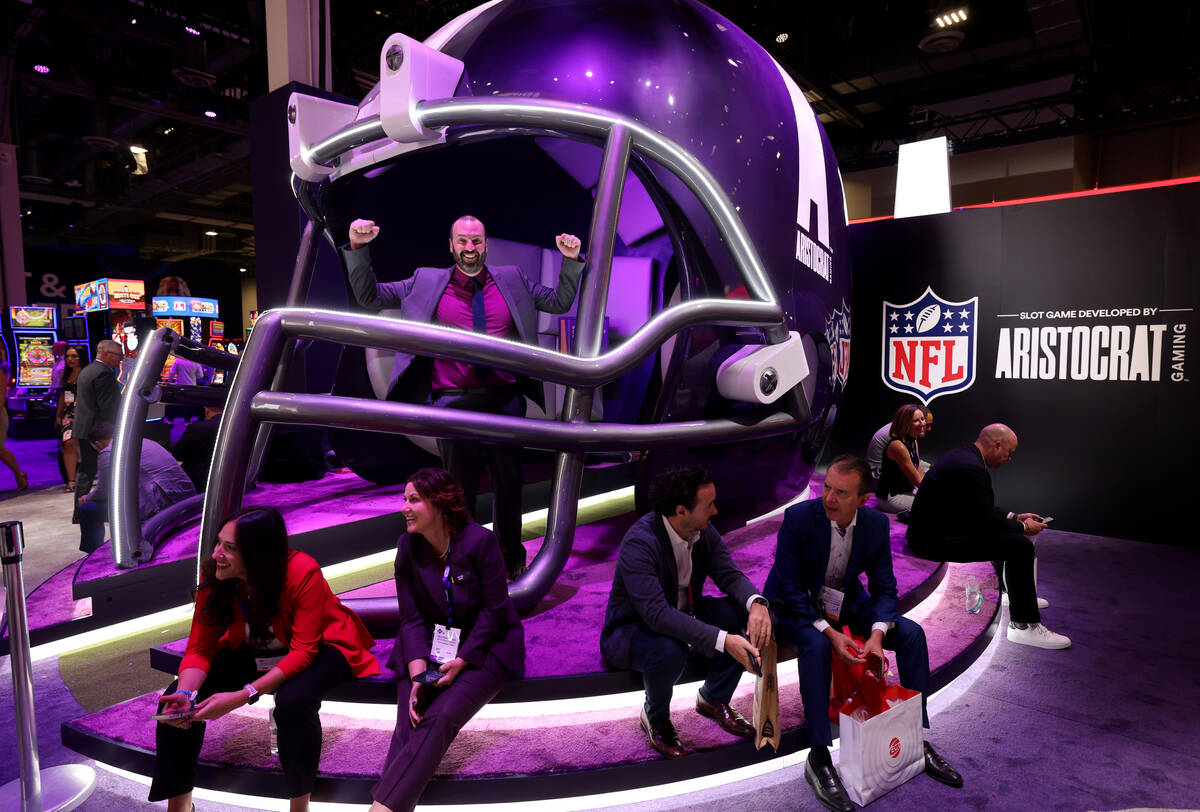 Jon Hanlin, Aristocrat Gaming’s senior vice president of commercial strategy and business analytics, in a giant football helmet in the center of the Aristocrat booth at the Global Gaming Expo at The Venetian Expo in Las Vegas on Wednesday, Oct. 12, 2022. Customers walked through the helmet to get a sneak peak at NFL-branded slot machines. (K.M. Cannon/Las Vegas Review-Journal) @KMCannonPhoto 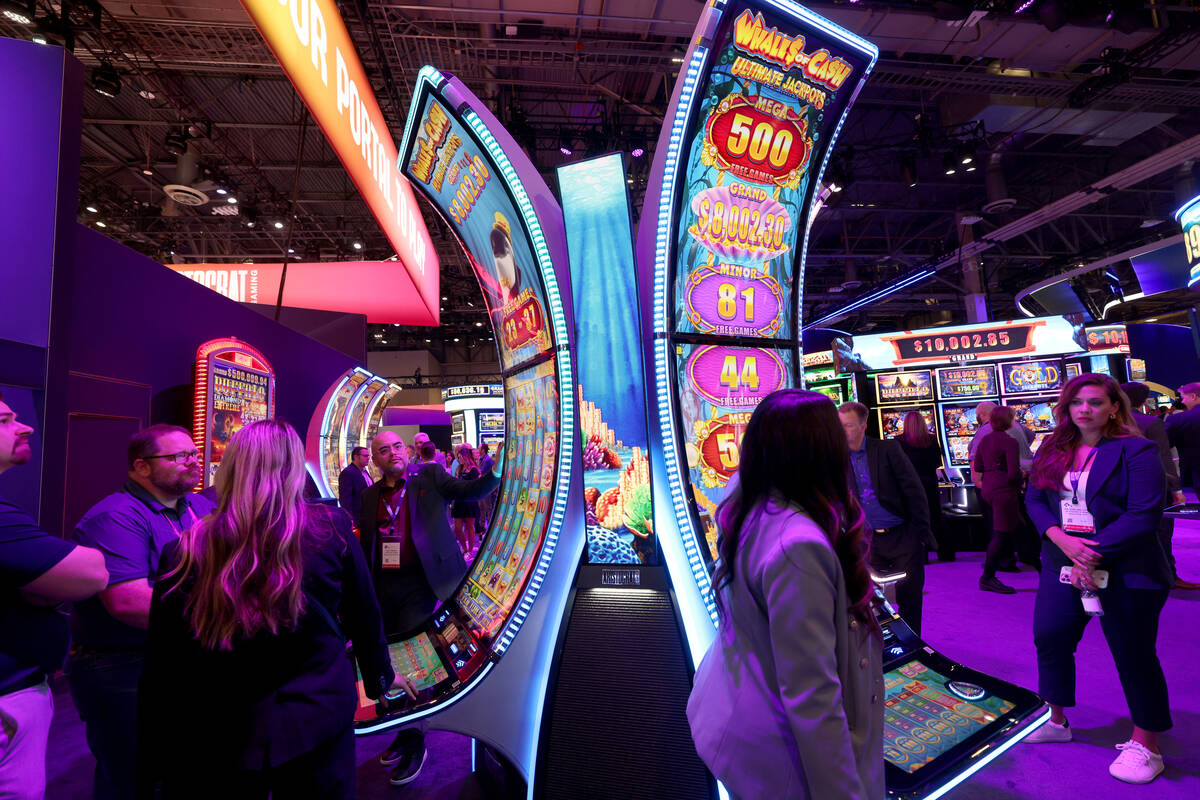 Customers check out Whale$ of Cash slot machines in the Aristocrat Gaming booth at the Global Gaming Expo at The Venetian Expo in Las Vegas on Wednesday, Oct. 12, 2022. (K.M. Cannon/Las Vegas Review-Journal) @KMCannonPhoto 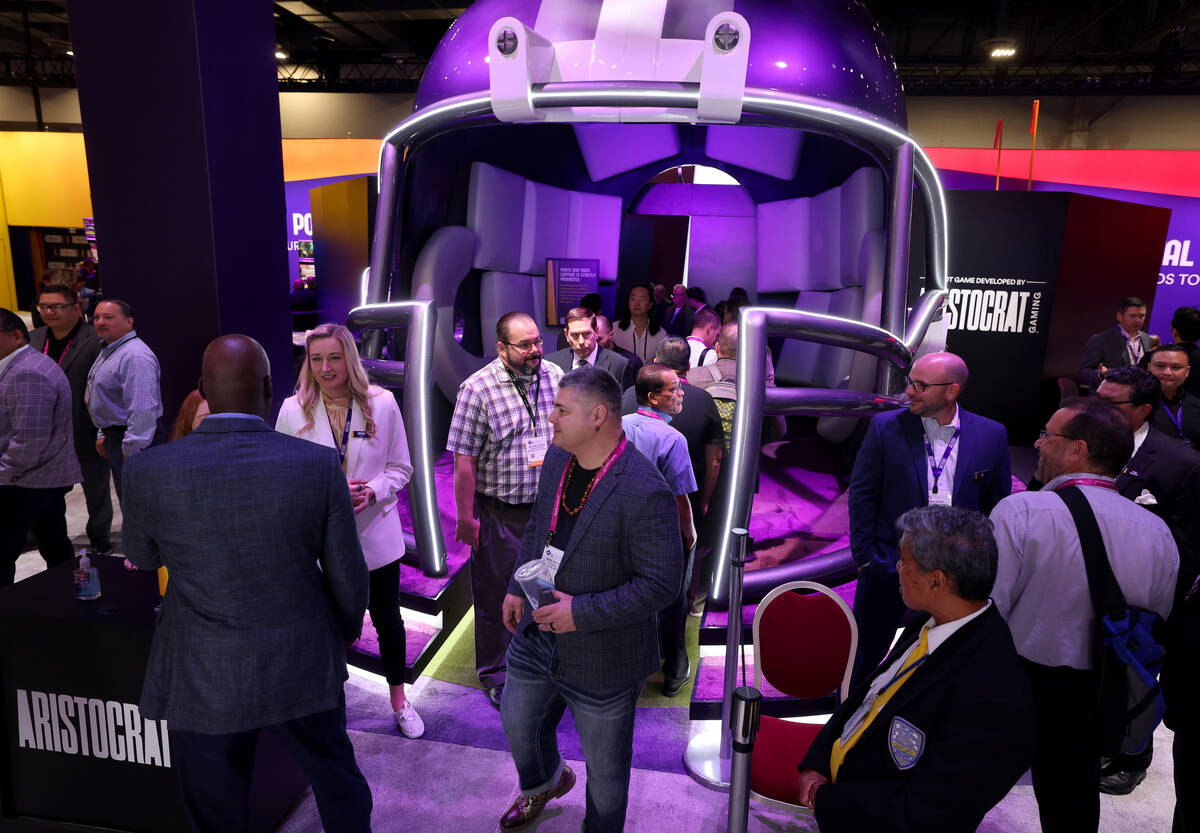 Customers walk through a giant football helmet to get a sneak peak at NFL-branded slot machines in the Aristocrat Gaming booth at the Global Gaming Expo at The Venetian Expo in Las Vegas on Wednesday, Oct. 12, 2022. (K.M. Cannon/Las Vegas Review-Journal) @KMCannonPhoto 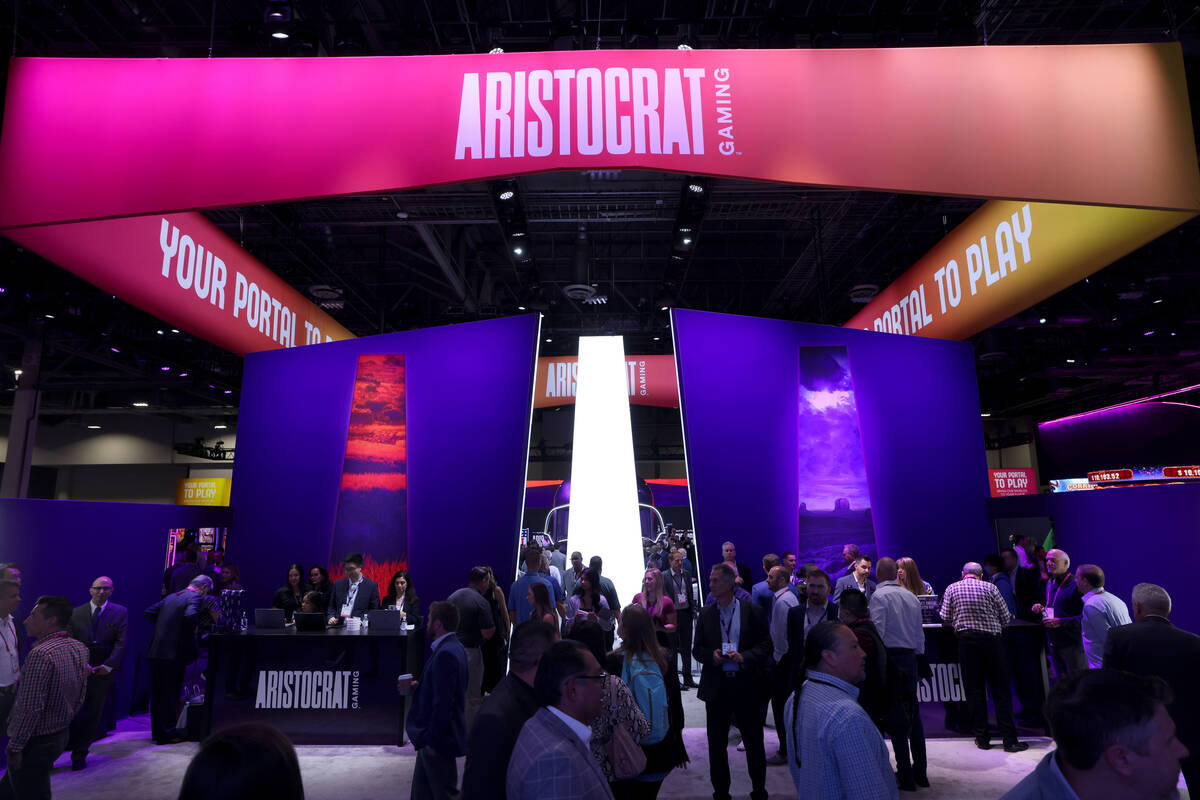 Customers in the Aristocrat Gaming booth at the Global Gaming Expo at The Venetian Expo in Las Vegas on Wednesday, Oct. 12, 2022. (K.M. Cannon/Las Vegas Review-Journal) @KMCannonPhoto

Aristocrat Gaming is excited about its latest licensing deal to create NFL-branded slot machines — look no further than the 16-foot-tall football helmet at the center of its exhibit booth during this year’s Global Gaming Expo at The Venetian Expo.

The first-of-its-kind slot machines were highlighted at the annual gaming industry convention and trade show, which ended Thursday.

Jon Hanlin, Aristocrat’s senior vice president of commercial strategy and business analytics, said the deal was a chance for the manufacturer to regionalize products for operators. But a third of NFL fans aren’t close to their home market, so the manufacturer created selectable art for each of the 32 teams.

“We’ve taken a very specific approach to regionalizing the art and skins so that the Green Bay Packers game has the cheese hats — it has the flair that a fan of that team will feel like it’s a fun experience,” Hanlin said.

Still, Aristocrat and the NFL are keeping the new product under wraps.

Aristocrat’s booth at G2E centered on the football helmet, which acted as a doorway leading to a private room where the machines were shown to customers only. Officials said it wasn’t open to public viewing, since details and licensing were still being finalized.

The machines are expected to hit casino floors by 2023.

“The NFL is excited to partner with Aristocrat Gaming to responsibly bring to life NFL-themed slot machines globally,” Joe Ruggiero, senior vice president of consumer products at the NFL, said in an April press release.

“Slot machines provide another opportunity for fan engagement and with the guidance of Aristocrat, we can continue to meet fans where they are at by creating a unique gaming experience on casino floors.”

But Aristocrat hopes it can do more than entice slot-playing fans.

Hanlin said the multi-year partnership, which grants exclusivity in licensing for land-based machines and non-exclusive licensing for virtual sports games, is a chance to show younger generations — already familiar with sports betting — what casino gaming is like.

“I think it’ll expand the market of people who will play slot machines because they’ll think differently of what a slot machine is versus what maybe their stereotype of slot machine gaming is,” he said.