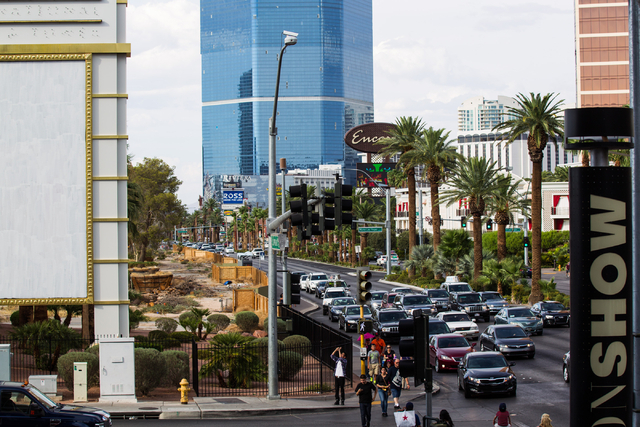 The land where the New Frontier hotel-casino once stood is seen on left adjacent to Las Vegas Boulevard, north of Spring Mountain Road in Las Vegas on Thursday, July 31, 2014. (Chase Stevens/Las Vegas Review-Journal)

Australian billionaire James Packer said he has acquired controlling interest in a nearly 35-acre Strip land parcel and will form a company to build a hotel-casino on the site with former Wynn Las Vegas President Andrew Pascal and investment firm Oaktree Capital Management.

In a statement released Sunday night by Packer’s Crown Resorts Ltd. in Melbourne, Australia, Packer said he will serve as co-chairman of the new company with Pascal. Plans are still being finalized but the company hopes to begin construction of a hotel-casino project in 2015.

The long dormant site once housed the New Frontier and was subject of the Strip’s most expensive real estate transaction.

Two Israeli companies bought the New Frontier and the land across from Wynn Las Vegas for $1.2 billion — roughly $24.8 million an acre — in 2007. The aging hotel-casino was demolished.

The companies planned to build a $5 billion hotel-casino based on the Plaza Hotel in New York City, but the recession killed the project.

Oaktree President Bruce Karsh said the company decided to reinvest a portion of the proceeds from its debt investment and become an equity partner in the project after talking with Packer and Pascal.

Packer, who has twice flirted with Las Vegas and was reportedly interested in buying the Cosmopolitan of Las Vegas earlier this year, said “you can’t be in the gaming industry and not have a special reverence for Las Vegas.”

“While we fell short in past attempts to enter that market, we now have the ideal opportunity with a great local partner in Andrew, a leading financial investor in Oaktree, and the perfect piece of property,” Packer said.

Pascal said the project could open by 2018.

“I’ve always been inspired by this city’s capacity for reinvention,” said Pascal, who developed and sold a slot machine company and has been involved in social gaming. “I’m excited to have my hand in crafting something new and fresh for the resurgent Las Vegas market.”