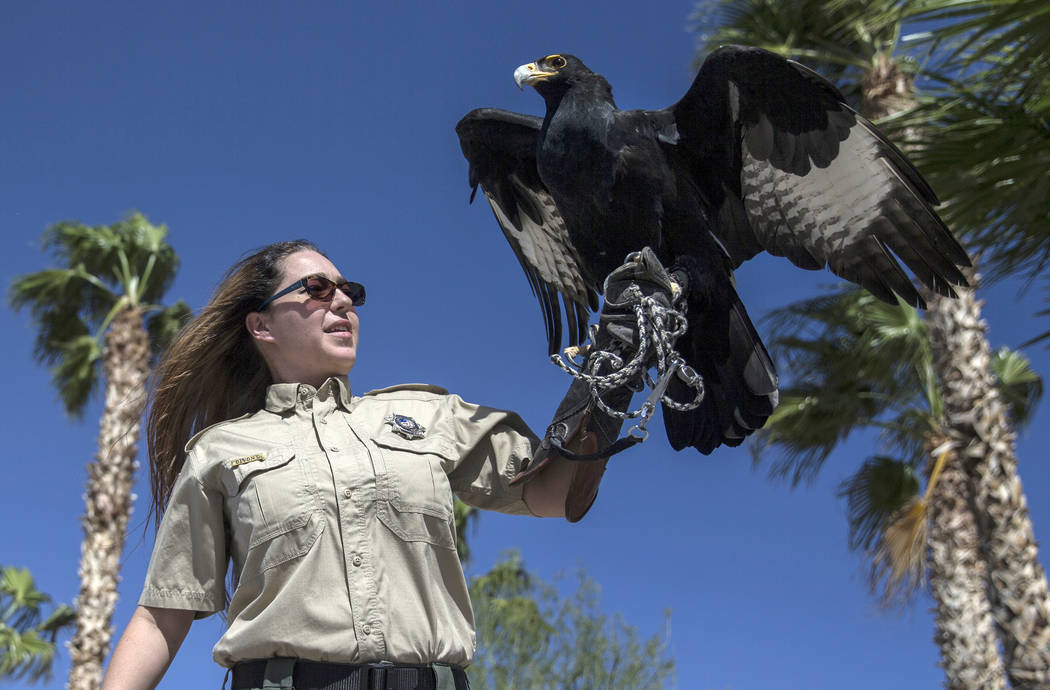 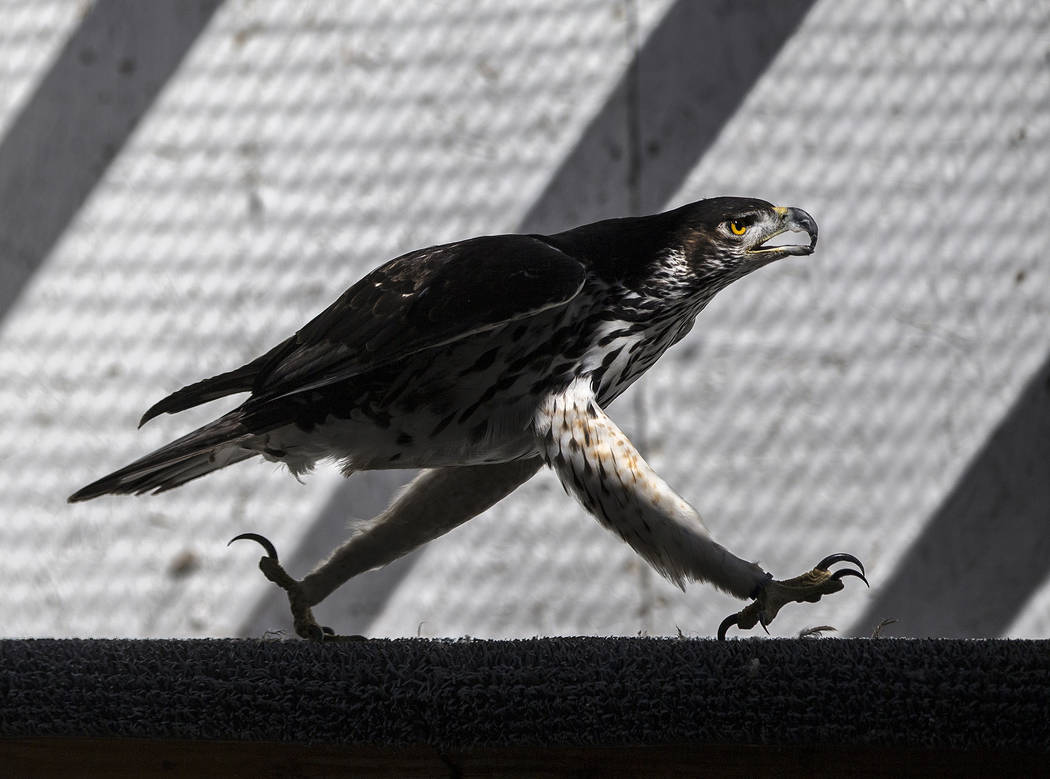 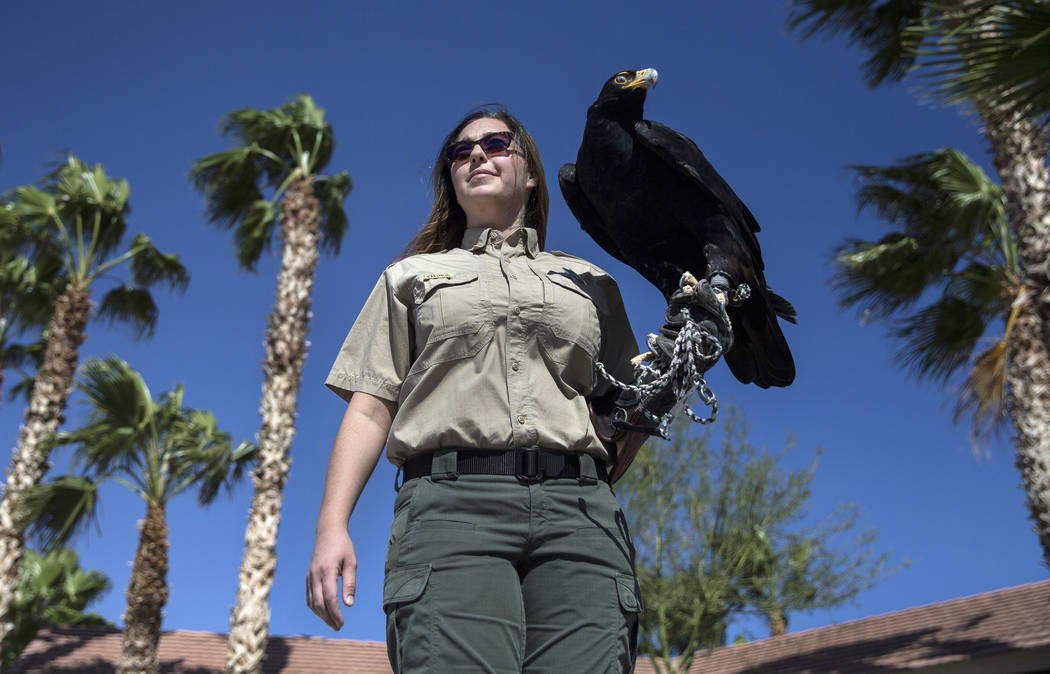 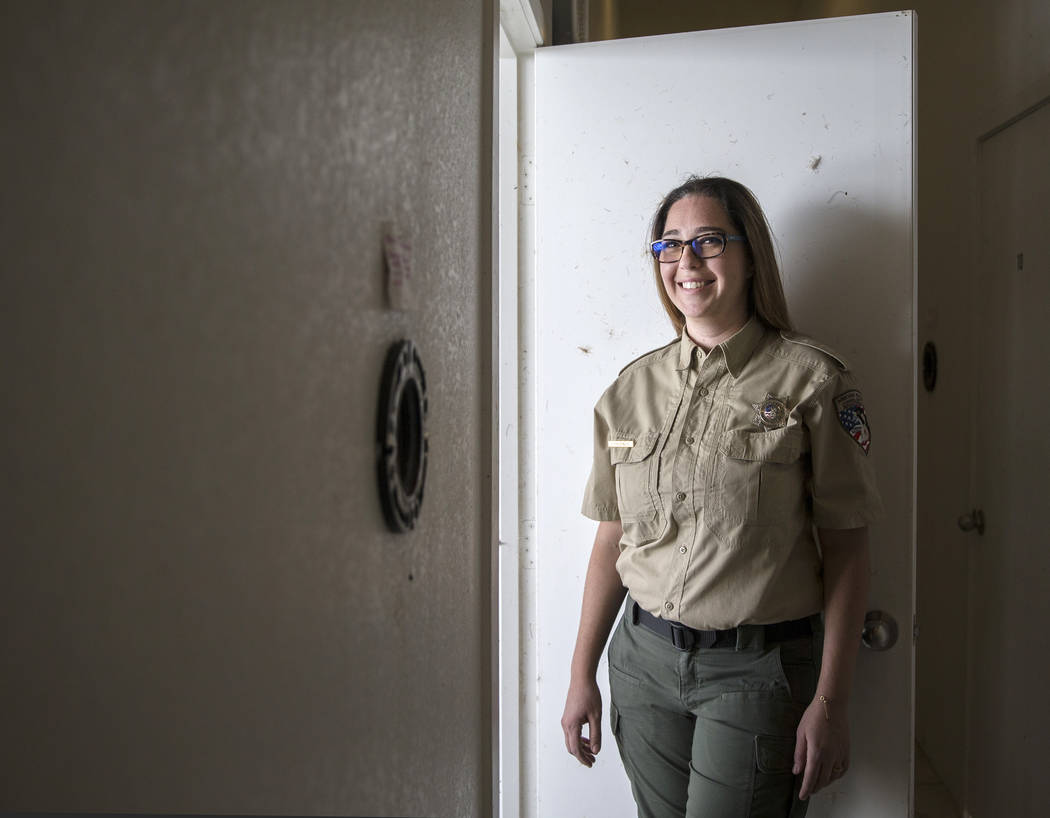 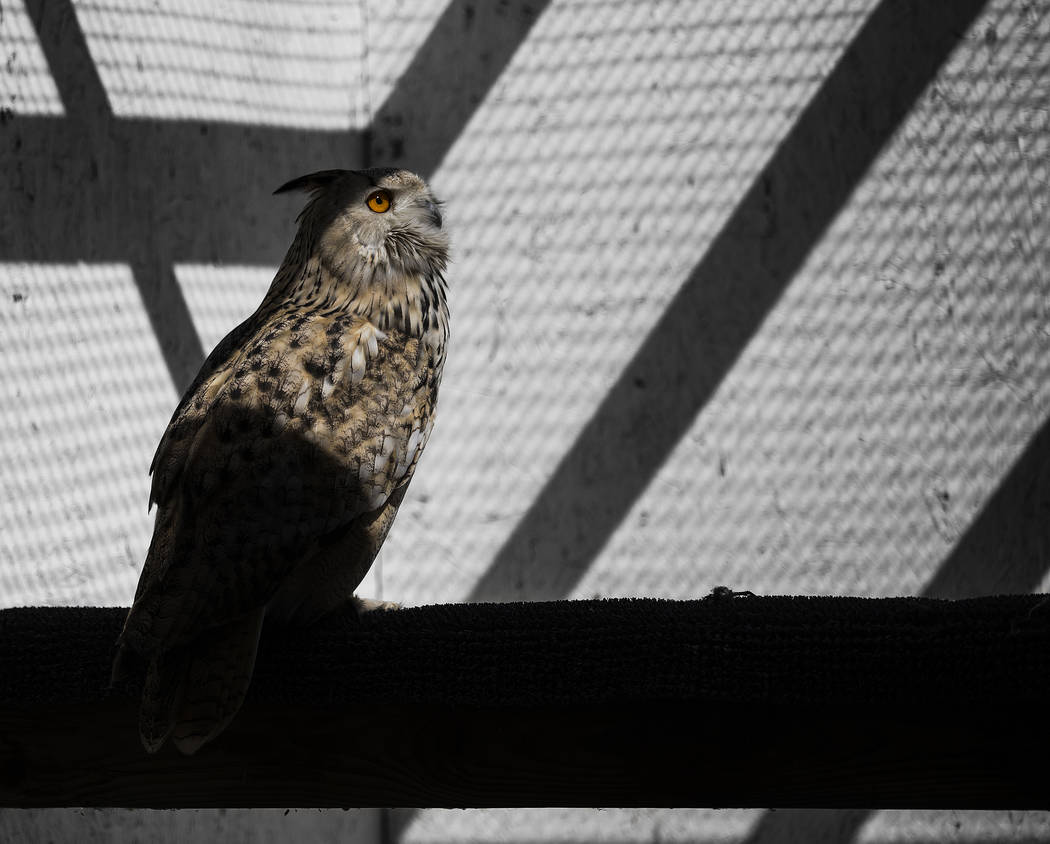 A mix of raptors, large and small, can be found perched on posts scattered across a lush backyard, amid palm trees and a crystal-clear pool. A snow-colored goshawk named Acacia squawks as Gewelber walks by, asking for food, while others preen in the desert wind.

While most of the birds spend their days at Gewelber’s home, it’s possible to find a select few soaring above the Las Vegas Strip. Her business, Airborne Wildlife Control Service, uses birds of prey to help dissuade pest birds from disturbing guests at local Wynn Resorts Ltd. properties.

Gewelber and her husband, Dave Kanellis, took over the company in the spring of 2017. While most of its revenue comes from pigeon control services at casinos and other businesses around Las Vegas, the company is known for its abatement contract with Wynn Resorts.

Gewelber said her team use Harris’s hawks to target food-aggressive breeds during the peak hours as Wynn guests are outside. The raptors follow a laser toward trees with grackles, scare them off and return at a breathtaking speed for a food reward. Meanwhile, another bird — called the enforcer — actively chases the unwanted birds to make sure they stay away.

“We’re not trying to kill anything. It’s harass and haze,” Kanellis said. “Then, early morning (or) evening when we’re not there, the birds are free to do whatever they want. They’ll come down and look for bugs or scrap food that got misplaced.”

The contract, which started in the spring, is set to wrap up this month with the end of pool season.

“It’s something we do to ensure (the pest birds) don’t become a problem,” said Wynn spokesman Michael Weaver.

‘Married to our birds’

Most of the birds in the program are kept in a 8,000-square-foot barn in the backyard, which holds the likes of kestrel falcons, Siberian eagle owls and African hawk eagles. Pop music blares from a radio inside the barn — a stimulus meant to put the birds at ease.

While some of the birds in the program are endangered, Gewelber said most of their work is meant to be proactive.

“It’s about learning how to breed them in captivity in case something happens out in the wild,” she said. “(Then we’d have) the knowledge on how to bring them back.”

“Many people who do abatement work, they have their one bird … (and) it may not be a great bird for abatement,” she said. “We can be selective and find the perfect bird for a property.”

Even more birds can be found inside Gewelber and Kanellis’ home. At the kitchen table, a Peruvian Harris’s hawk named Ranger stands on Kanellis’ arm, one leg curled under its body.

“A bird would not do this unless it’s happy and comfortable,” Kanellis said, referencing the hawk’s posture. “He’s completely content.”

Getting to that level of relaxation takes a lot of time, something Gewelber doesn’t seem to have enough of.

The business owner spends at least 40 hours a week working as the director of a dental clinic. When her shift ends, she starts her job at Airborne Wildlife, doing the accounting and paperwork and taking care of dozens of birds.

Gewelber said she and Kanellis have to forgo vacations because of the amount of attention the animals require.

“We can’t go anywhere. … I put everything I have into this,” she said. “We’re married to our birds.”

And that relationship isn’t cheap. Food alone costs upward of $1,500 a month, and the price tag to import certain species can reach tens of thousands of dollars.

But it’s worth the effort. Gewelber said she has been a fan of birds since she was a kid growing up in Southern California. At 11, she learned about falconry, a form of hunting that uses a trained bird of prey.

“I thought that was the coolest thing since sliced bread and wanted to do it,” she said.

It took only three years before she got her first bird, a red-tailed hawk named Fayte that would accompany her to Renaissance fairs. Years later, raptors still play a major role in her life in many forms, from abatement and training to breeding and educational efforts.

“I enjoy sharing our passion,” Gewelber said. “I enjoy other people getting the same enjoyment for the same things I did as a kid.”