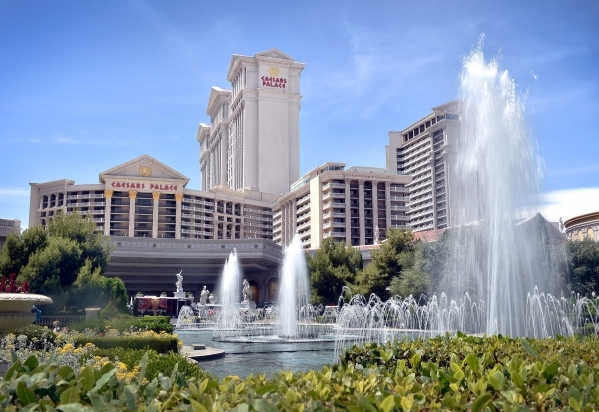 Caesars Palace hotel-casino with it fountains is seen on Tuesday, May 12, 2015, in Las Vegas. Caesars Entertainment Corp. said it was in discussions with federal authorities to settle money laundering allegations at Caesars Palace and the casino company could pay a fine of between $12 million and $20 million. (David Becker/Las Vegas Review-Journal)

The company, which operates nine resorts on or near the Strip, said net revenue for quarter that ended Dec. 31 was $1.12 billion, an increase of 8.7 percent. The company’s net revenue for all of 2015 grew 14.7 percent to $4.5 billion. Caesars said its net loss in the quarter was $76 million, compared with a loss $262 million a year ago.

Caesars CEO Mark Frissora said in a statement the company had its best full-year of operating results since 2007.

Caesars Entertainment Operating Co., which the company placed into a Chapter 11 bankruptcy reorganization 13 months ago, was excluded from the reported results. The operating unit includes nearly two dozen regional casinos, along with Caesars Palace, Caesars Atlantic City and Harrah’s Reno.

When the operating unit’s net revenue of $4.7 million was factored into the results, the company’s overall 2015 net revenue increased 6 percent to $9.05 billion.

Frissora told analysts during a conference call to discuss results that he would not address any questions about the bankruptcy reorganization, which is expected to conclude sometime this summer. Caesars hopes to trim almost $10 billion of the division’s $19.6 billion of long-term debt by splitting the operating unit into an operating company and a real estate investment trust.

During the conference call, Frissora outlined some of the company’s operating highlights in 2015, including cost savings efforts that resulted in $350 million in additional cash flow. He said the bottom line also benefited from a full year of operations from the Cromwell and Linq hotels in Las Vegas and the Horseshoe Casino Baltimore.

He also outlined several capital improvement efforts for the upcoming year. Caesars plans to renovate some 4,800 hotel rooms at its Strip resorts, including Planet Hollywood, Paris Las Vegas and Harrah’s Las Vegas. Another 900 hotel rooms will be upgraded in regional markets, including its Biloxi, Miss., property and Caesars Atlantic City.