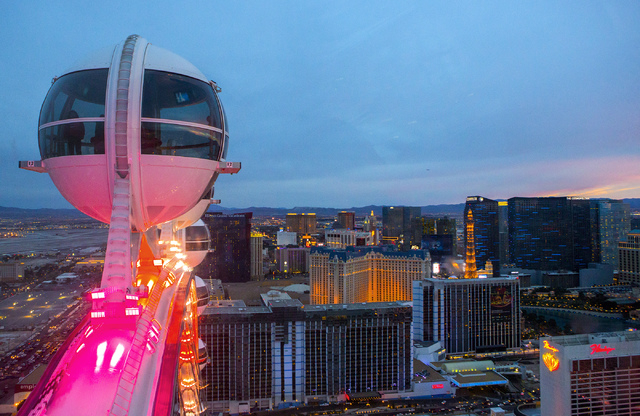 “Las Vegas remained a bright spot with strength in the hospitality categories, but regional business trends were unfavorably impacted by extreme weather and softness in visitation in the first quarter,” Caesars Chairman Gary Loveman said in a statement.

Analysts, however, focused on the company’s multipronged debt restructuring effort — announced Tuesday — to deal with the most pressing portion of Caesars’ gaming industry-high $23 billion long-term debt.

Under the plan the company won’t reduce any of its total debt, but will eliminate more than $1 billion in obligations that are due in 2015.

KDP Investment Advisors gaming analyst Barbara Cappaert called it a sweeping move, “stripping guarantees, repaying some debt above par, but is not nearly the comprehensive restructuring many investors, like us, were expecting. It certainly sets the stage for one later on, no doubt.”

Union Gaming Group analyst Robert Shore said the “restructuring efforts should be a key topic on the (company’s earnings) call. We think the fundamental earnings should essentially be a nonevent.”

Cappaert, in a research note to investors following the restructuring announcement, said the company has undertaken 45 capital market transactions among its various entities since two private equity firms completed a $30.7 billion leveraged buyout of the casino operator in 2008.

“It makes investors heads spin at the dizzying pace of capital structure actions, asset sales to related entities and other not so arms lengths transactions in the structure,” Cappaert said. “But that is the point, in our opinion. It has become so complicated and so cumbersome that challenging these moves in bankruptcy would surely take years to sort out.”

Caesars plans to raise $1.75 billion in new debt that will have longer maturity dates, with the proceeds used to pay the 2015 figure.

Meanwhile, the company plans to sell 5 percent of its equity to institutional investors and will pursue listing the shares at a future date.

The company announced the refinancing after the markets closed Tuesday. On Wednesday, shares of Caesars increased 14.12 percent or $2.62 to close at $21.18 on Nasdaq.

During the first quarter, Caesars’ properties in Las Vegas increased revenue 5.6 percent to $794 million in the quarter. Loveman credited the opening of the $550 million Linq, a retail, dining and entertainment development with the High Roller observation wheel as its centerpiece.

Loveman said the High Roller is attracting “thousands of riders a day” with a virtually “all cash business” despite the company not doing much pre-opening marketing for the attraction.

“We didn’t know when it would open, so we’re pleased with its performance,” Loveman said. “Early visitation is quite strong.”

The Linq has helped drive visitation trends at Caesars’ surrounding properties, including the Flamingo, Quad, and Harrah’s Las Vegas.

Caesars opened the casino portion of The Cromwell in April with a full opening planned for May.

“As additional assets come on line later this year and into 2015, we are excited about Caesars’ prospects in Las Vegas,” Loveman said.

On the other side of the spectrum, the company’s four casinos in Atlantic City and Harrah’s Philadelphia saw revenue decline 13.7 percent to $315.3 million. The company said the Atlantic Coast region was hurt by competition and lower property visitation partially driven by extreme winter weather this year.

“We’re troubled by Atlantic City,” Loveman said. “We believe there is too much capacity in the market.”