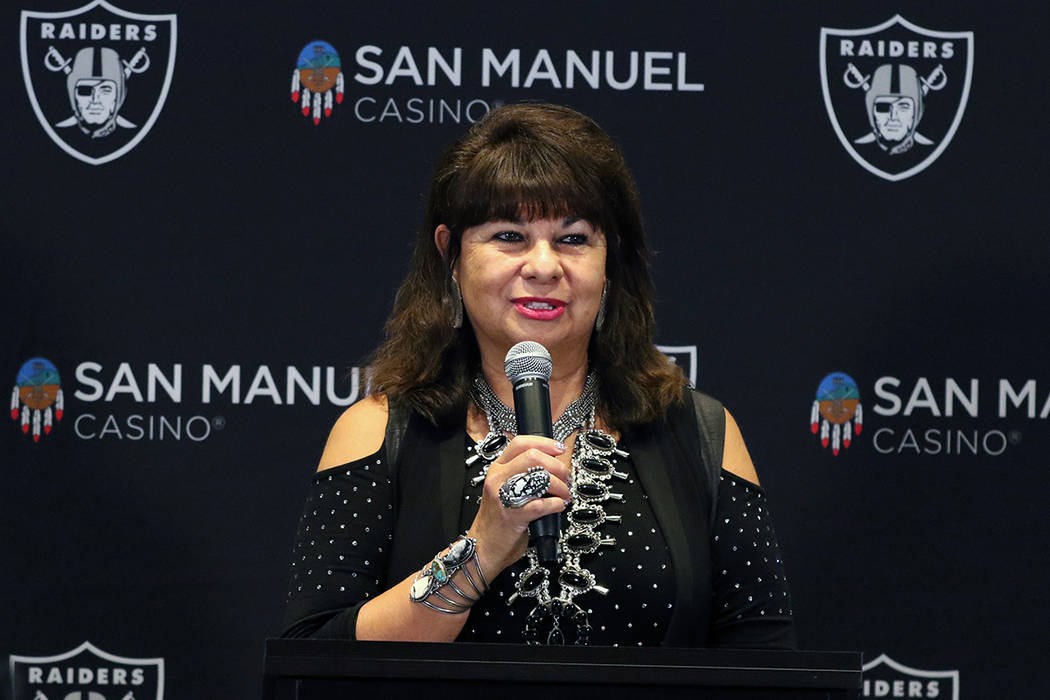 Lynn Valbuena, the San Manuel Band of Mission Indians chairwoman, speaks during a press conference on Monday, Oct. 14, 2019, in Las Vegas. The Raiders and Allegiant Stadium announced that they will be partnering with Southern CaliforniaÕs San Manuel Casino. (Bizuayehu Tesfaye/Las Vegas Review-Journal) @bizutesfaye 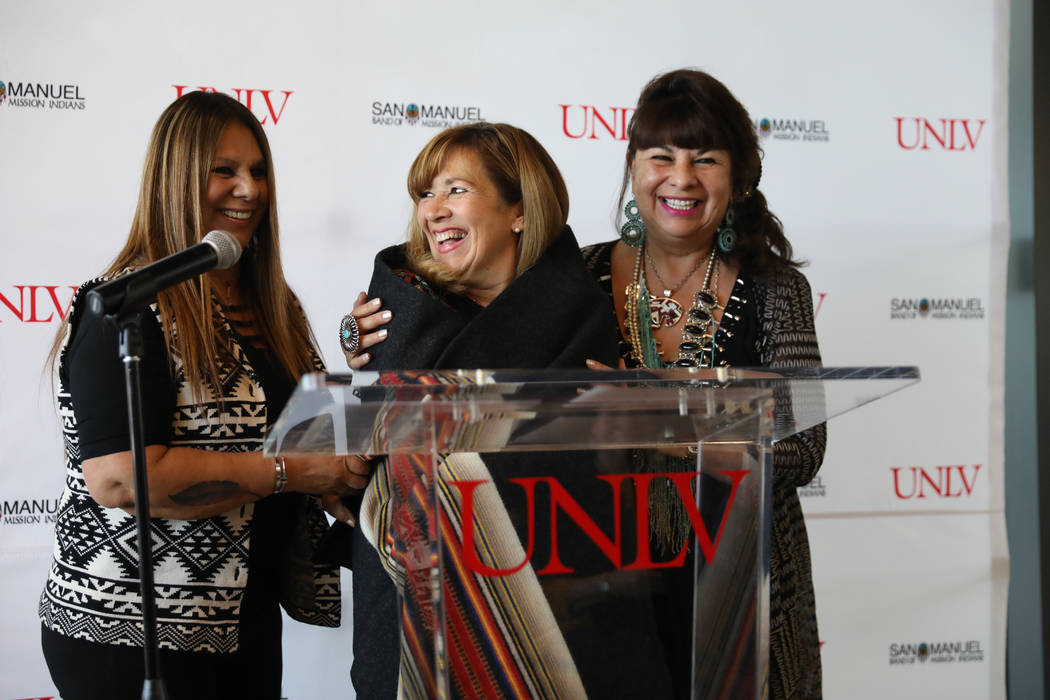 A California Indian tribe known in Southern Nevada as a major sponsor of Las Vegas sports franchises is donating $9 million to UNLV.

The San Manuel Band of Mission Indians hopes to position the university as the nation’s leading source for education and innovation related to tribal gaming operations and law.

Rep. Dina Titus, D-Nev., and UNLV President Marta Meana were among the dignitaries making presentations as San Manuel Tribal Chairwoman Lynn Valbuena announced the gift that will present $6 million to fund an endowed chair in the William F. Harrah College of Hospitality, and $3 million for program support at the William S. Boyd School of Law.

The donation is the largest out-of-state philanthropic gift that the tribe has bestowed on an educational or healthcare institution. The agreement will for the first time infuse the elements of tribal gaming into one of the world’s leading hospitality and gaming programs, and add a tribal gaming emphasis to the nation’s only master’s degree program in gaming law.

“The gaming industry is a great economic driver and when you put that with hospitality, it means even more,” said Titus, whose legislative district includes the Strip, downtown Las Vegas and UNLV.

The industry provides $74 billion in wages, benefits and tips nationwide and more than $40 million in federal, state and local taxes, she said.

Valbuena said boosting UNLV’s programs not only would benefit her own tribe and its casino operation, but tribal casinos around the country. She said more than 200 tribes operate more than 400 casinos in the United States.

“The full potential of tribal gaming cannot be achieved if we do not also place emphasis on developing native people to manage our economic developments, including gaming,” Valbuena said. “Therefore, we are making this investment in the partnership with UNLV to educate and prepare our children, grandchildren and future generations to help chart our path to a sustainable future.”

Valbuena said the tribe frequently looks beyond its own neighborhood in its giving.

“San Manuel has such a robust philanthropy program and we always do what we can to assist others in need, not only in our local communities and backyards, but around the country and in different states,” she said.

In a brief ceremony, Valbuena placed a traditional blanket over Meana’s shoulders in a blanket-wrapping symbolizing the tribe’s new partnership with the university.

The San Manuel Band operates the San Manuel Casino in Highland, California, in San Bernardino County, 60 miles east of Los Angeles. Last year, the tribe broke ground on a 17-story, 450-room, $550 million hotel expected to be completed by summer 2021, when a 3,000-seat entertainment venue also is due to open.

In October, the tribe announced a partnership with the Las Vegas Raiders at Allegiant Stadium. The San Manuel Casino also has a partnership signed a year ago with the Vegas Golden Knights at T-Mobile Arena.