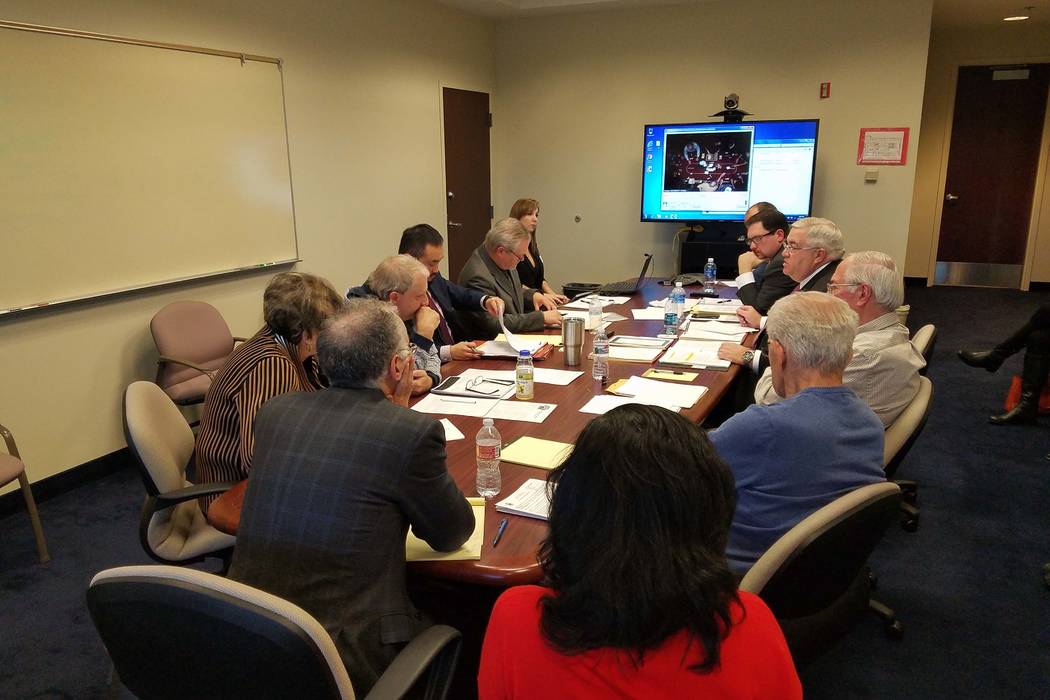 Poker players, Station Casinos' poker room officials and state Gaming Control Board administrators gather around a table in a conference room at the Gaming Control Board offices at the Sawyer Building in Las Vegas on Tuesday, Dec. 12, 2017, to hear a player dispute involving a "bad-beat" jackpot. (Richard N. Velotta/Las Vegas Review-Journal)

It’s going to take a little longer for poker players involved in a high-profile player dispute between Red Rock Resort and more than 80 players who stand to split about $120,000 of a “bad-beat jackpot” will get their money.

The state Gaming Control Board on Thursday remanded the player dispute back to a hearing officer after member Terry Johnson said he still had questions about a June 7 game at which a player with a straight flush in a Texas Hold ‘em game lost to a player with a better hand.

If Red Rock were to agree to pay, Las Vegas resident Avi Shamir would collect $62,126 as the holder of cards for a straight flush that was edged out by a higher straight flush held by Las Vegan Leonard Schreter. About 80 other players would get $565 each because they were playing in one of Station Casinos’ poker rooms at the time the bad beat occurred.

The jackpot is generated by a special rake or drop so Red Rock is holding money that would be distributed to players regardless and not kept by Station.

“I don’t feel I have enough information to decide those items today,” Johnson said at the beginning of the hearing.

Johnson cited three reasons for sending the matter back. He said he had questions about why Schreter decided to withdraw his complaint in the case. At the Dec. 12 hearing, Schreter said he felt badly that his actions — turning his cards over prematurely — had cost Shamir the big jackpot. Station believes revealing the cards early constitutes illegal communication between players, even though every card had been dealt and the outcome of the game wouldn’t have changed.

Johnson also wants the hearing officer to review and clarify evidentiary materials submitted in the case. He also asked for clarity on which rules — Station’s “bad beat” rules or standard poker-room procedural rules — were used to reach the determination from the hearing officer that the jackpots be paid.

Johnson said it’s important to clarify those points in the event that Station appeals the case to Clark County District Court, which the company is entitled to do if it is dissatisfied with the board’s ruling.

Shamir, who attended the hearing and speaks English as a second language, showed no reaction to the decision but his supporters attending the meeting said they were disappointed that payment was again delayed.

A new hearing hasn’t been scheduled.