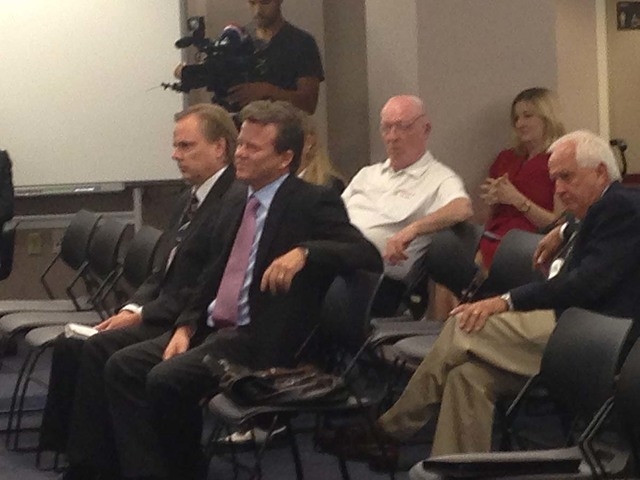 The Nevada Gaming Commission on Thursday approved an ownership change in the Mountain View Casino in Pahrump, which returned a member of the Herbst family to the gaming industry. But the discussion was more about medical marijuana.

A group headed by Timothy Herbst was approved for a 50 percent ownership in the small property, which will be renamed to carry the Terrible’s moniker. He said the casino would start out with 180 slot machines and be co-owned with its current operator, Rochelle McCaw, widow of the founder of Mountain View Casino John McCaw.

Herbst told the commission his brother, Troy Herbst, who had been an investor in the casino business, would have no involvement with the gaming company because of his interest in a potential medical marijuana dispensary in Clark County.

In May, the Gaming Control Board issued an industry notice telling gaming license holders — and even prospective license applicants — to stay far away from medical marijuana. Under federal law, distribution, possession and sale of the drug is a crime.

Tim Herbst told the commission his brother would divest from the gaming business if his company earns a dispensary license. If the medical marijuana business isn’t licensed, he said his brother might want to return to the casino business.

“We’re not going to do anything to disappoint this commission,” Tim Herbst said. “We will do everything in our power to keep a bright light on this business.”

He said the businesses would be operated separately.

Gaming Commission Chairman Tony Alamo Jr. said the regulators would not change their stance on medical marijuana unless the federal government decriminalizes the activity.

Separately, the Gaming Commission also approved the management team that has been operating the troubled Riviera for more than a year.

The approval allows Paragon Gaming, which is headed by Dianna Bennett and Scott Menke, to share in the gaming revenue produced by the Strip resort.

Menke told the commission that operations at the hotel-casino had stabilized. The Riviera, which opened in 1955, has been in bankruptcy three times in the past 50 years.

“The property is doing better under your control, and I’m not surprised that you’ve taken this property and have been able to make it work,” said Gaming Commissioner John Moran Jr.

Bennett, who owns 50 percent of Paragon, is the daughter of the late Las Vegas gaming pioneer William Bennett. The company began managing the Riviera in June 2013, following a management shake-up.

Menke, who owns the remaining 50 percent of Paragon, said the company plans to update the Riviera’s technology and explore additional enhancements. He told the commission the casino should benefit from development on the north end of the Strip, including the recent opening on the SLS Las Vegas.

Bennett’s family owned the Sahara, which was sold to SBE Entertainment and Stockbridge Real Estate and transformed into the SLS.

Paragon’s contract with the Riviera will last two years, expiring in June 2015.

The Riviera filed for bankruptcy in 1985 and 1991, when Meshulam Riklis lost the property to Riviera Holdings.

The most recent bankruptcy came in July 2010, when Riviera Holdings filed for Chapter 11. Four months later, the company emerged from bankruptcy and became part of Greenwich, Conn.-based Starwood Capital Group, which holds 41 percent of Riviera Holdings.

Privately held Paragon was formed in 2000 and partnered with a Native American tribe in Palm Springs, Calif. Paragon operates three casinos in western Canada, including the River Creek Resort near Edmonton, Alberta, and soon will break ground on a 500-room hotel-casino in Vancouver, British Columbia.