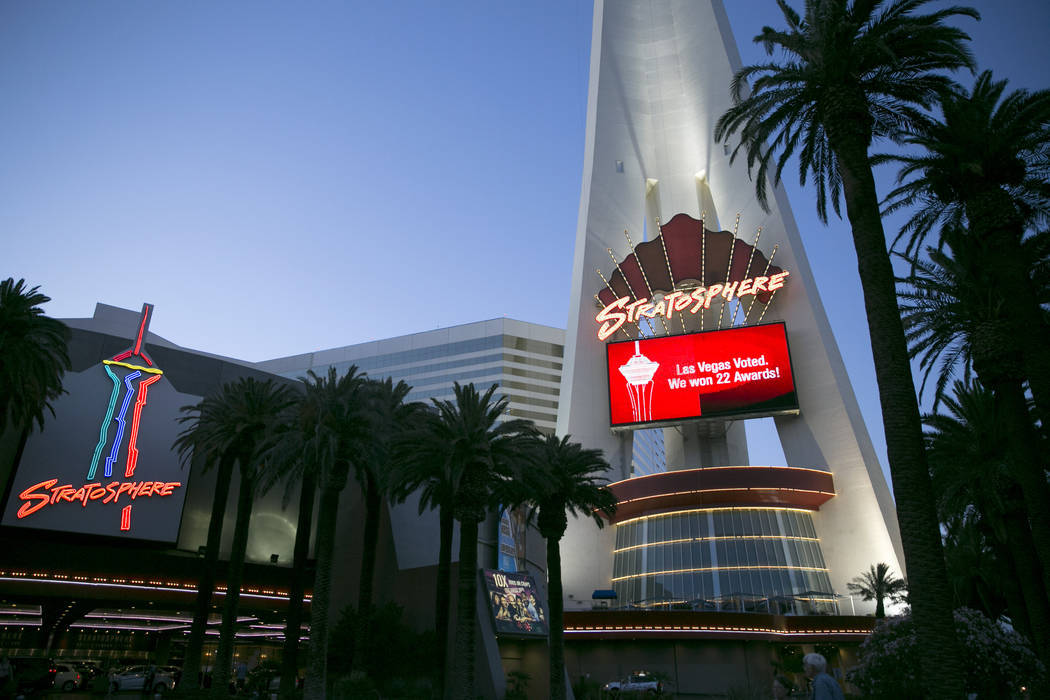 The Stratosphere hotel-casino on Monday, June 12, 2017, in Las Vegas. Golden Entertainment, operators of the PT's Pubs chain, is acquiring a company that owns four Nevada casinos, including the Stratosphere and two Arizona Charlie's for $850 million. (Las Vegas Review-Journal)

The company, which got the Stratosphere, two Arizona Charlie’s properties and Laughlin’s Aquarius in its $850 million acquisition of American Casino & Entertainment Properties announced in June, will renovate nearly half of the Stratosphere’s 2,427 rooms in the project that will begin in the second quarter.

The company also will add a gastro-brewery attached to the casino sports book, upgrade the tower’s high-end Top of the World restaurant, add new food outlets and transform 50,000 square feet of unused space into a meetings area through summer 2021.

Golden Chairman and CEO Blake Sartini announced the company’s capital improvements strategy in a call with investors that outlined a record quarter in which the company showed a 74.9 percent increase in revenue mostly as a result of operations at the newly added properties.

The company reported a loss of $13.4 million, 53 cents a share, for the quarter, which included 73 days of operations of the four new properties. That compared with earnings of $10 million, 44 cents a share, on revenue of $105.4 million in the fourth quarter of 2016.

Chief Financial Officer Charles Protell said like several properties located on the Strip, the Stratosphere saw a revenue decline as a result of the Oct. 1 shooting. He said the incident resulted in a decline of about $2 million to $3 million in cash flow in the fourth quarter.

But Sartini said Southern Nevada’s economic rebound is giving the company confidence for the future.

“Large-scale projects on the north end of the Las Vegas Strip – including Genting’s Resorts World, the expansion of the Las Vegas Convention Center and the investment to complete the former Fontainebleau — are bringing traffic and infrastructure to our doorstep at the Stratosphere,” Sartini said. “In addition, the population in the Las Vegas Valley continues to grow to new highs while local unemployment of 4.9 percent is at its lowest level in quite some time and wage growth remains healthy.”

Sartini outlined the three-year timetable for improvements at the Stratosphere and said the phases of work were scheduled to minimize disruption during key dates on the calendar.

The first phase, which would begin in the second quarter and end by the end of 2018, will include remodeling 317 hotel rooms, adding the new gastro-brew outlet, a new casino “view lounge” overlooking the floor, remodeling the observation deck and thrill-ride levels with a new bar appealing to a younger demographic, new exterior signage and a new rewards center and VIP hotel registration area.

The second phase beginning the first quarter of 2019 will include remodelling 452 hotel rooms, adding a new steakhouse, remodeling the casino floor, adding a new Starbucks outlet and general aesthetic upgrades throughout the resort.

The final phase beginning in 2020 will include 364 room remodelings, a new noodle bar and food-hall concept, the remodeling of the Top of the World, revamping the showroom, adding new casino space directed and younger casino visitors, to be called Adrenaline and reworking space on the mezzanine level for the planned convention center.

Sartini noted that the improvements under consideration don’t include 16 acres surrounding the property that could be used for future expansion. The new upgrades are expected to generate a return on investment of between 15 percent and 20 percent, Sartini said.

Golden also is working toward unveiling a single loyalty card that could be used at all Golden properties and will debut by the end of the year. He said the company already has detected increasing numbers of crossover customers from the company’s network of pubs and taverns dining and playing at the company’s casino properties.

Golden shares on Thursday closed up 49 cents a share, 1.7 percent, to $29.21 a share on active volume. After hours, shares were unchanged.