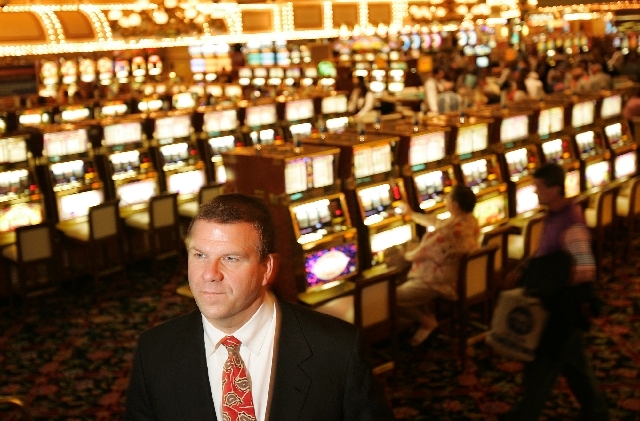 Tilman Fertitta, shown inside the Golden Nugget in Las Vegas, is purchasing the Houston Rockets for $2.2 billion. (Las Vegas Review-Journal)

Restaurant owner Tilman Fertitta reached agreement to purchase the Houston Rockets from Leslie Alexander for $2.2 billion, an NBA record, with a formal announcement expected this week.

He is one of many celebrity-status investors who made an offer for the franchise.

His CNBC show called “Billion Dollar Buyer” premiered in March 2016 and was renewed for a second season, Forbes notes.

The 73-year-old Alexander bought the franchise for $85 million in 1993. Forbes valued the franchise in February at $1.65 billion — eighth-most valuable in the league — with revenue of $244 million.

“It’s been my great joy and honor to own the Houston Rockets for the past 24 years,” Alexander said in a statement Monday. “I’ve had the incredible opportunity to witness true greatness through the players and coaches who have won championships for the city, been named to All-Star and All-NBA teams, enshrined in the Basketball Hall of Fame, and done so much for our franchise and our fans.”

Alexander had immediate success as an owner as the Rockets won NBA titles over the New York Knicks in 1994 and the Orlando Magic in 1995 behind the play of Hakeem Olajuwon.

“The Houston community has been home to me,” Alexander said. “I will continue to support the charities I have made commitments to throughout the years. I’ll always have a special place in my heart for the fans, partners, city officials and employees who care so deeply for this team.

“I’ve made this decision after much deliberation with my family and friends, and do so knowing the franchise is in great shape with the players, coaches and management team in place.”

“Leslie Alexander is a true competitor who always searched for the right move to make his teams better, Silver said. “Under his ownership, he created a culture of excellence with strong management that attracted Hall of Famers, All-Stars and coaching giants and brought two NBA championships and four WNBA titles to Houston.

“Well-respected around the league, he has been an active and influential owner whose vision helped to grow the game globally, especially in China. Moreover, his philanthropy speaks just as powerfully as his ownership, with local libraries, women’s centers and homeless shelters all benefitting from his generosity.”

Alexander put CEO Tad Brown in charge to “oversee the sales process with the league office, supported by my management team.”

5
CARTOONS: How McCarthy plans to solve the debt-ceiling standoff