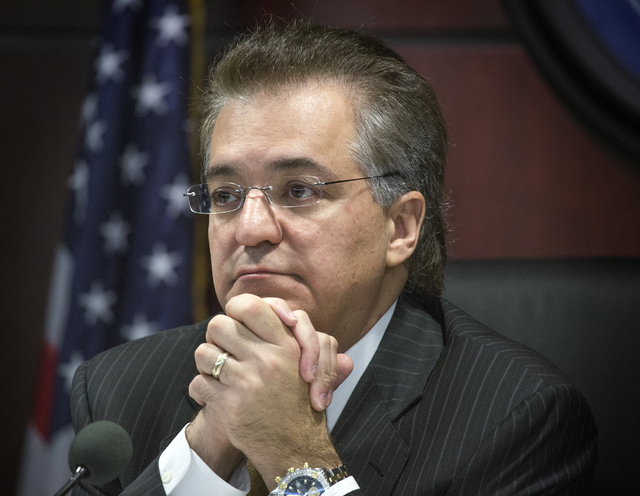 The Nevada Gaming Commission gave clear answers to several questions involving recreational marijuana use as they relate to gaming licensees: No, no, no.

In the first of a series of policy discussions Thursday, the five-member board that sets policy for the gaming industry reiterated that as long as marijuana consumption and possession is viewed as a felony by federal authorities, it will have no place in Nevada casinos.

Commissioners spent more than an hour discussing what Chairman Tony Alamo said would be the least controversial aspects of potentially bringing marijuana into casino resorts.

Commissioners discussed potential third-party and business associations between licensees and individuals and companies involved in the marijuana industry.

While no votes were taken, commissioners unanimously concluded that licensees should be discouraged from hosting shows or conferences that promote the use, sale, cultivation or distribution of marijuana. Licensees also shouldn’t maintain business relationships with marijuana companies, including landlord-tenant arrangements.

Commissioners also said licensees should not receive financing from or provide financing to an individual, entity or establishment that sells, cultivates or distributes marijuana. In that discussion, commissioners agreed that there is not enough separation in spousal relationships for a gaming company to be allowed to conduct business with the wife or husband or even parents of children of anyone involved in the marijuana business.

Commissioners didn’t even address stickier issues involving marijuana consumption, including use in hotel rooms by guests and treatment of employees who test positive for marijuana in their systems.

Marijuana policy will be discussed over a series of commission meetings in future months, Alamo said.

State Gaming Control Board member Terry Johnson, who attended the meeting and issued regulators’ first pronouncements about medical marijuana in May 2014, said the commission’s discussion on recreational pot was a good start, but there is still work to be done.

“We’ve got some work to do in terms of distilling what is going to be the policy and how it should be manifested,” Johnson said. “Is it going to be sufficient to make policy-type pronouncements (in public meetings), or is it going to be necessary to adopt rules that put everyone on notice as to what the requirements and expectations are?”

Commissioner Philip Pro, a former federal judge, said he felt it would be important to advise licensees of regulators’ expectations.

“I think you are wise to begin with a premise of laying out broadly a clear policy of the commission,” Pro said in a dialogue with Alamo during the meeting.

Pro said that could be done in the form of interpretation, much the way policymakers have analyzed the Constitution, the Bill of Rights and constitutional amendments in public policy.

“But I think at this point in time, it’s extremely important for the commission to lay out a clear policy that is not going to be ambiguous or confusing to the licensees or anybody else involved in gaming,” he said.

And commissioners were clear — and unified — about what they thought about the casino industry’s relationship with third parties involved in providing marijuana.

Because federal government policy says marijuana is a Schedule 1 controlled substance and state gaming regulations find it unsuitable for licensees to conduct business with entities violating federal law, any connection with a marijuana purveyor shouldn’t be allowed.

Commissioners said that the reputation of the gaming industry is at stake and there needs to be a clear separation from what is considered an illegal substance.