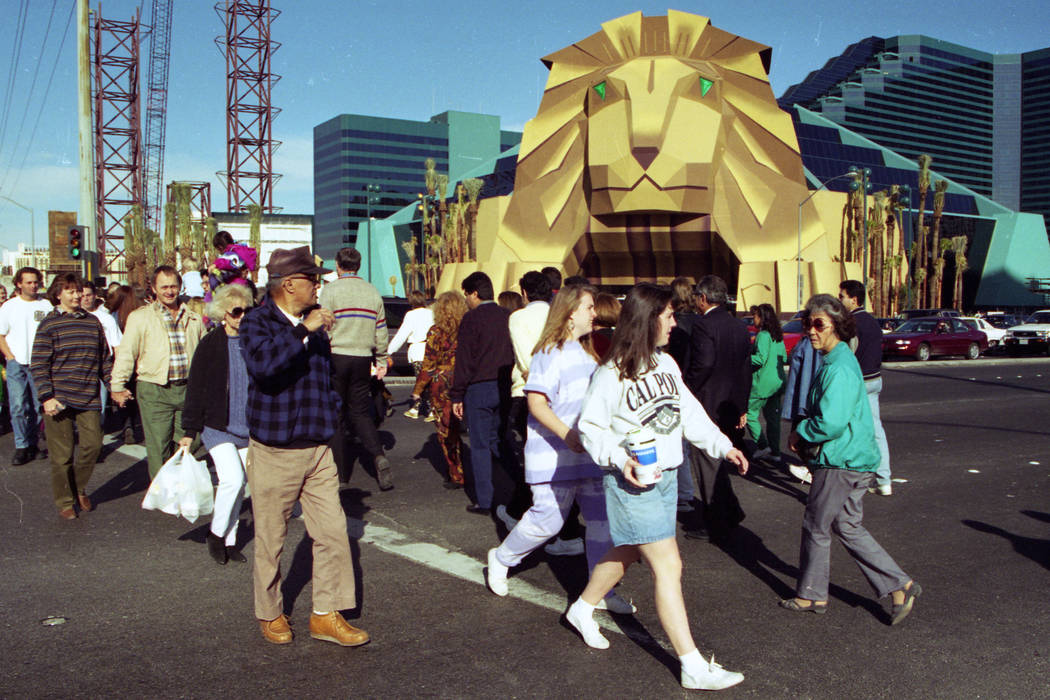 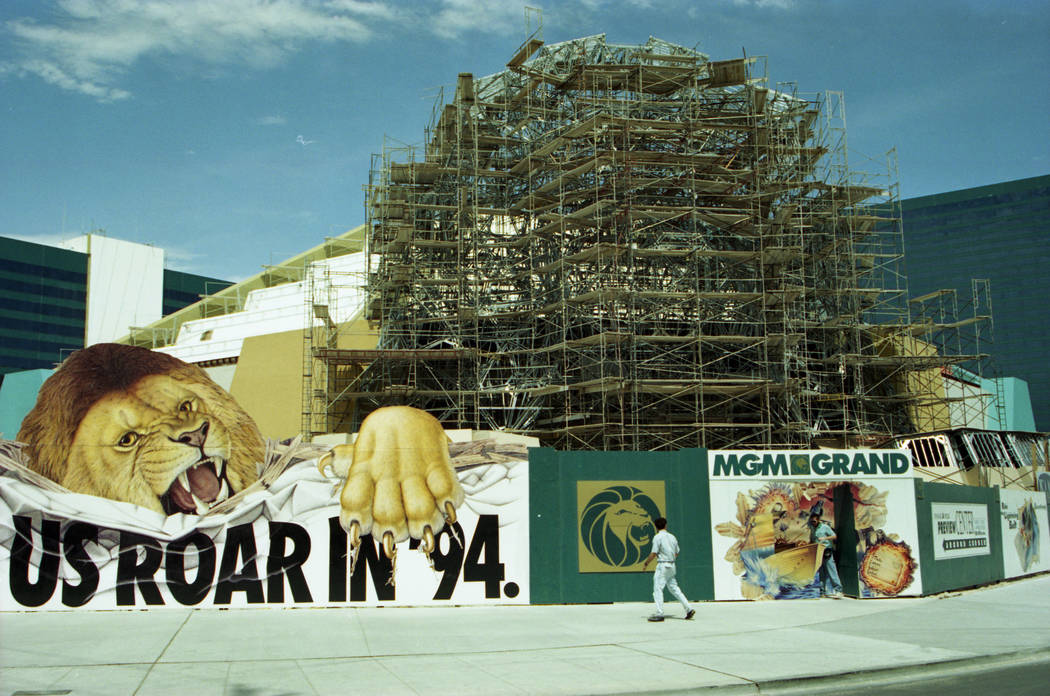 MGM Grand under construction in July 1993. The banner in front says "Watch Us Roar in 94." (Las Vegas Review-Journal file) 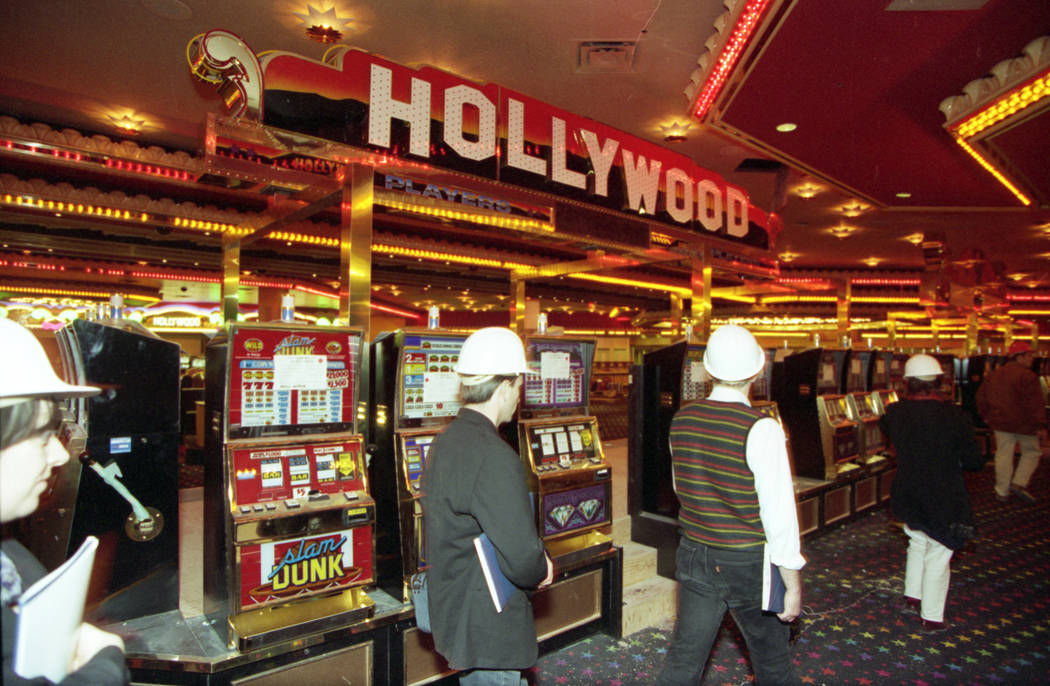 A pre opening tour of the MGM Grand in November 1993. Billionaire Kirk Kerkorian modeled the resort after the movie "The Wizard of Oz" and the resort included a 33-acre theme park called the MGM Grand Adventures theme park. (Las Vegas Review-Journal file) 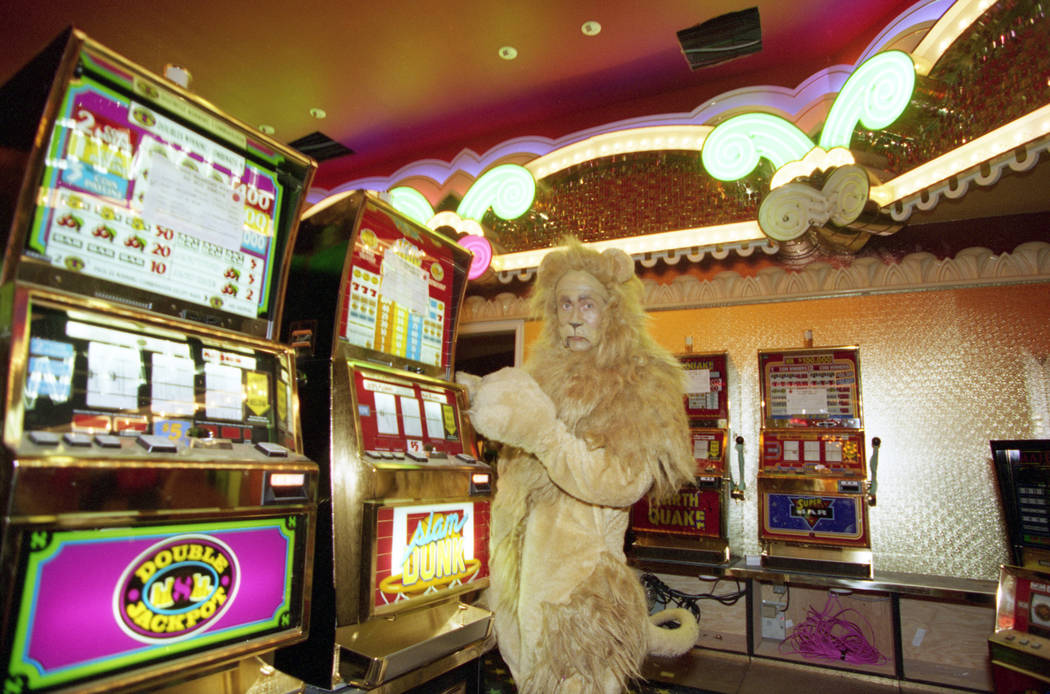 The Cowardly Lion from the movie "The Wizard of Oz" plays the slot machines during a pre opening tour of the MGM Grand in November 1993. MGM Grand was the world's first combined hotel, casino and theme park. (Las Vegas Review-Journal file) 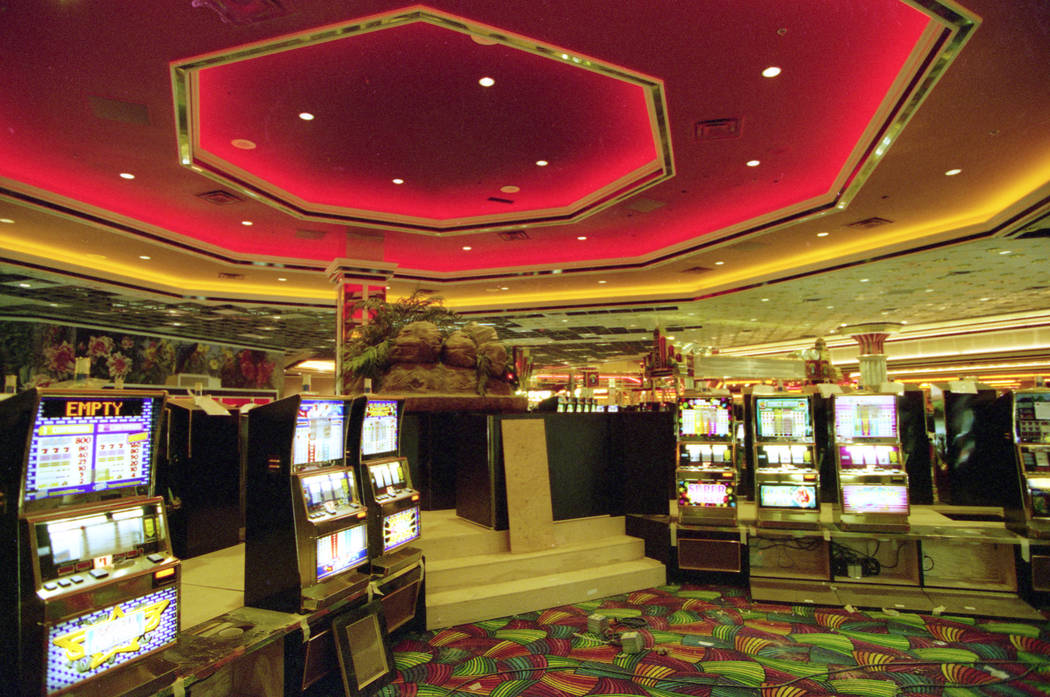 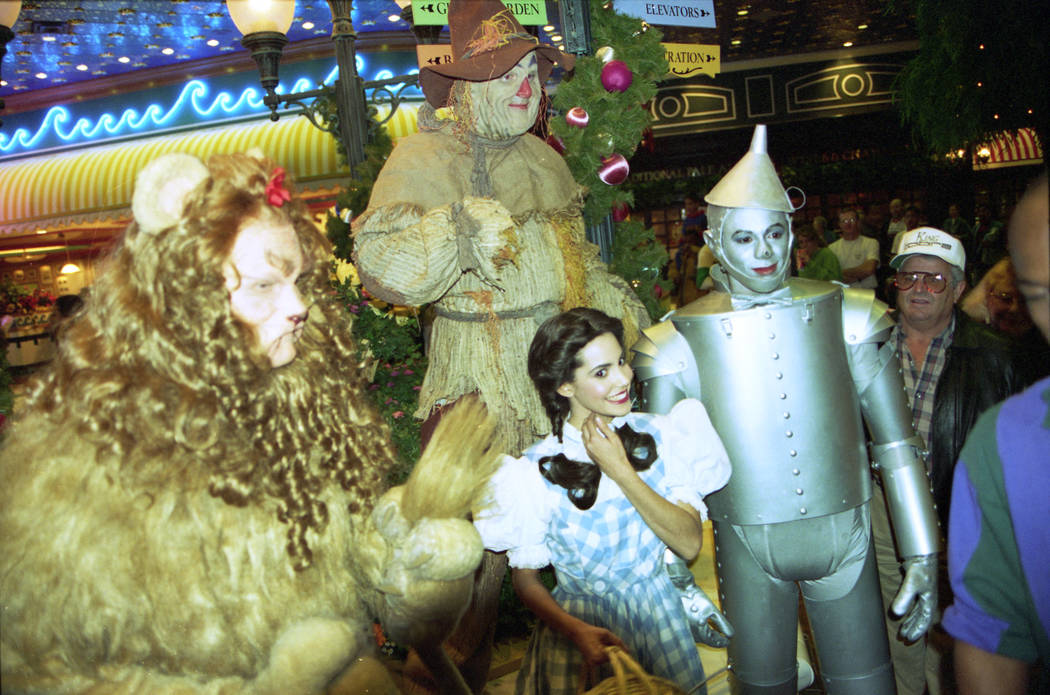 Characters from the movie "The Wizard of Oz" attended the grand opening of MGM Grand on Dec. 18, 1993. MGM Grand was the world's largest hotel and casino at this time and Las Vegas' first theme park. (Las Vegas Review-Journal file) 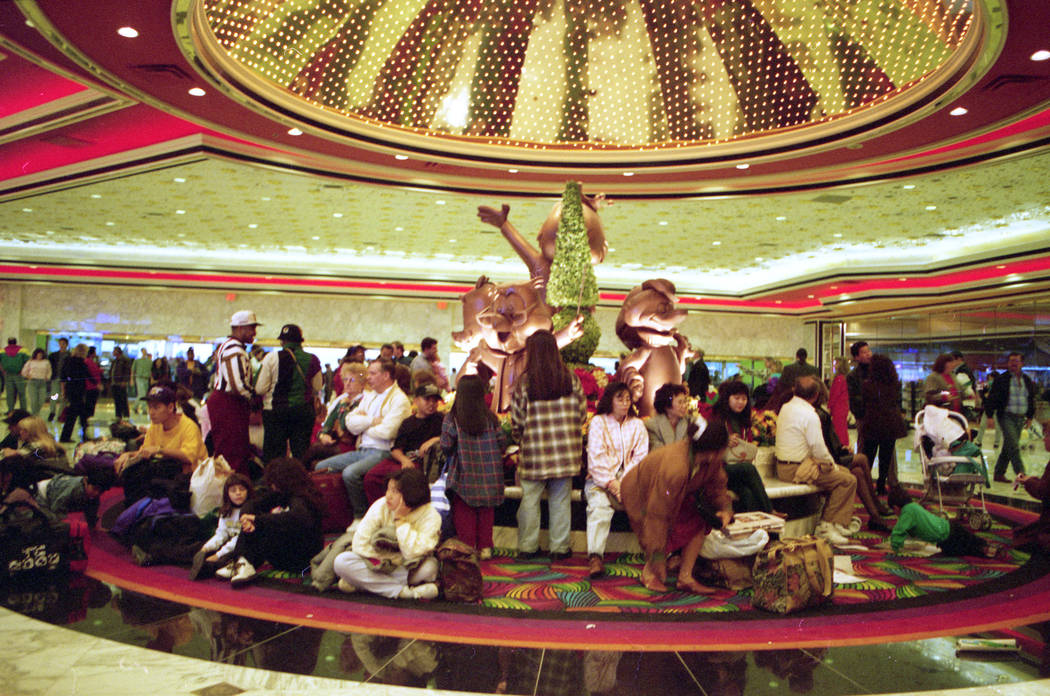 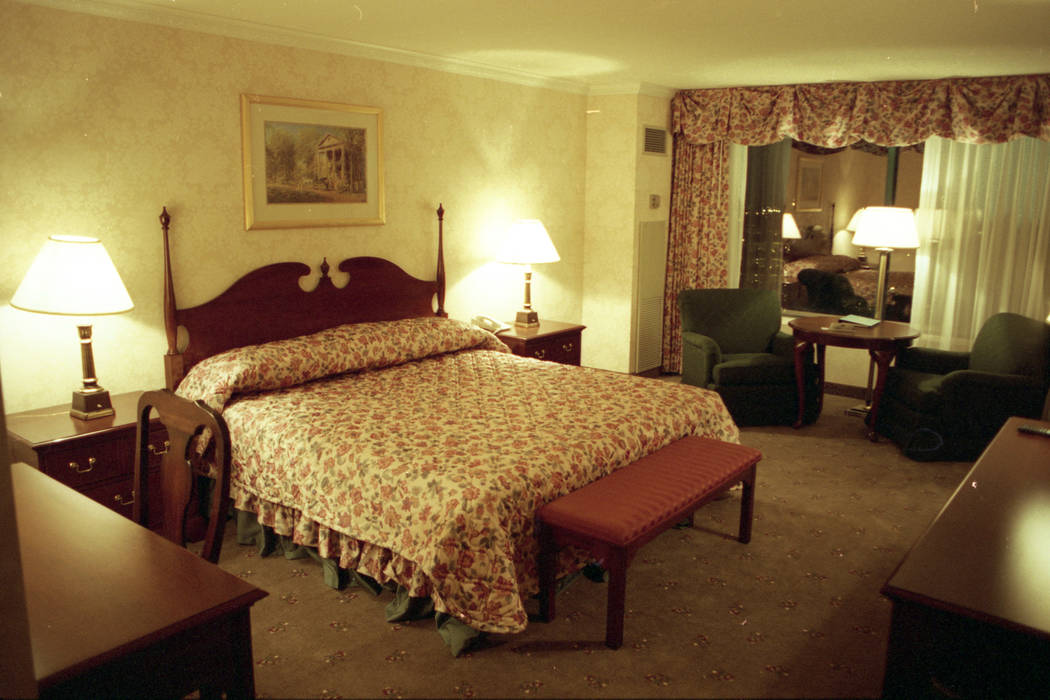 A room in the Deep South tower with a "Gone With the Wind" theme at MGM Grand pictured in December 1993. (Las Vegas Review-Journal file) 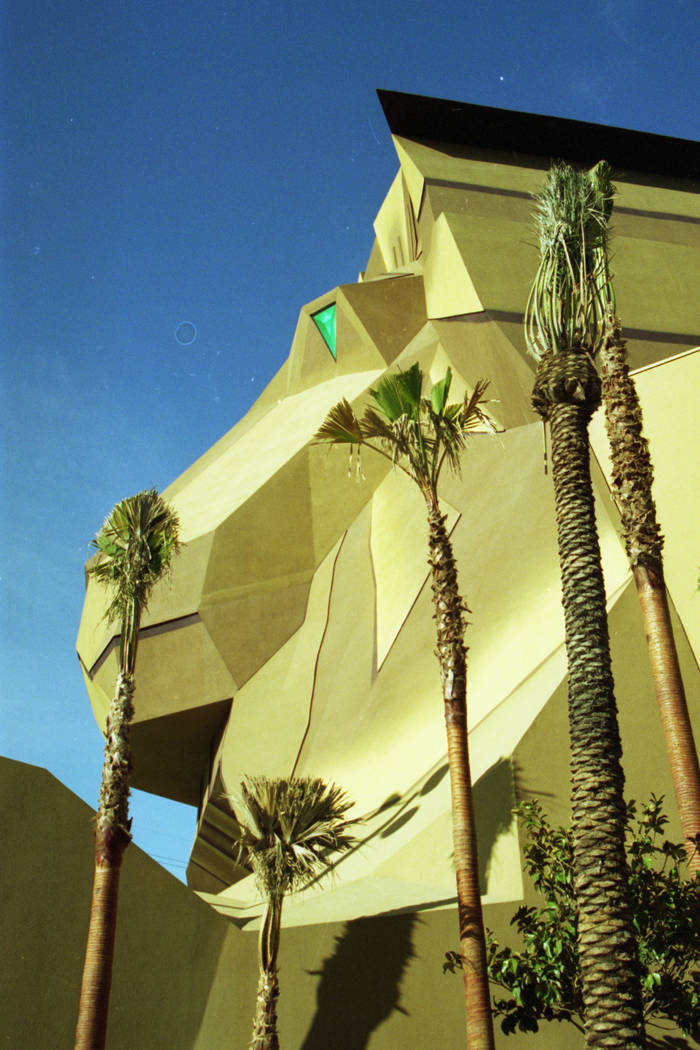 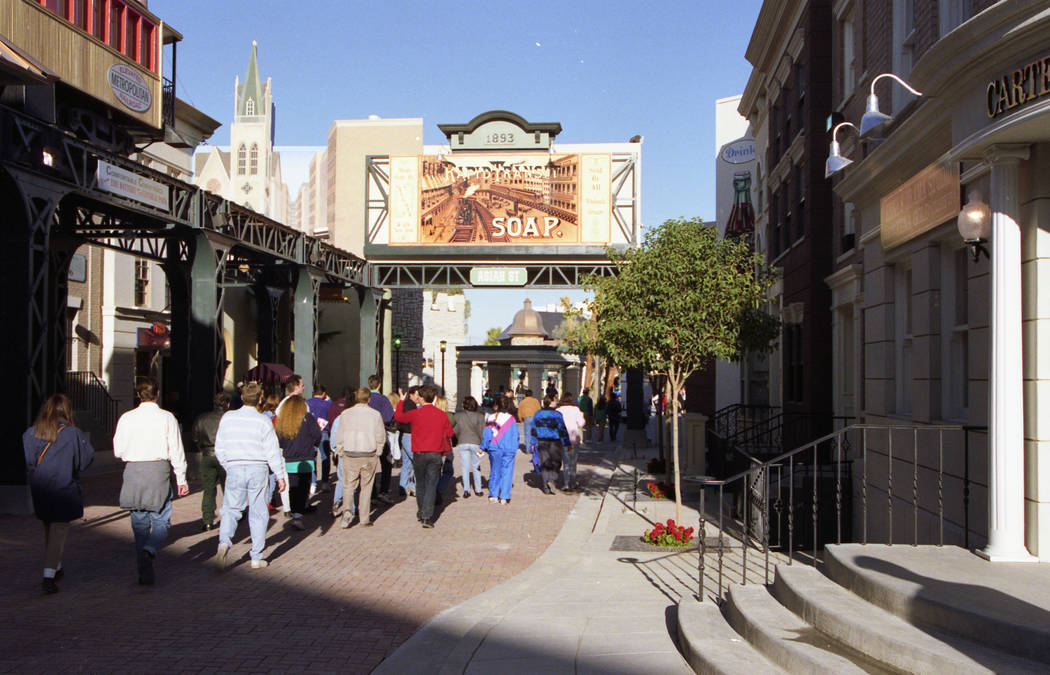 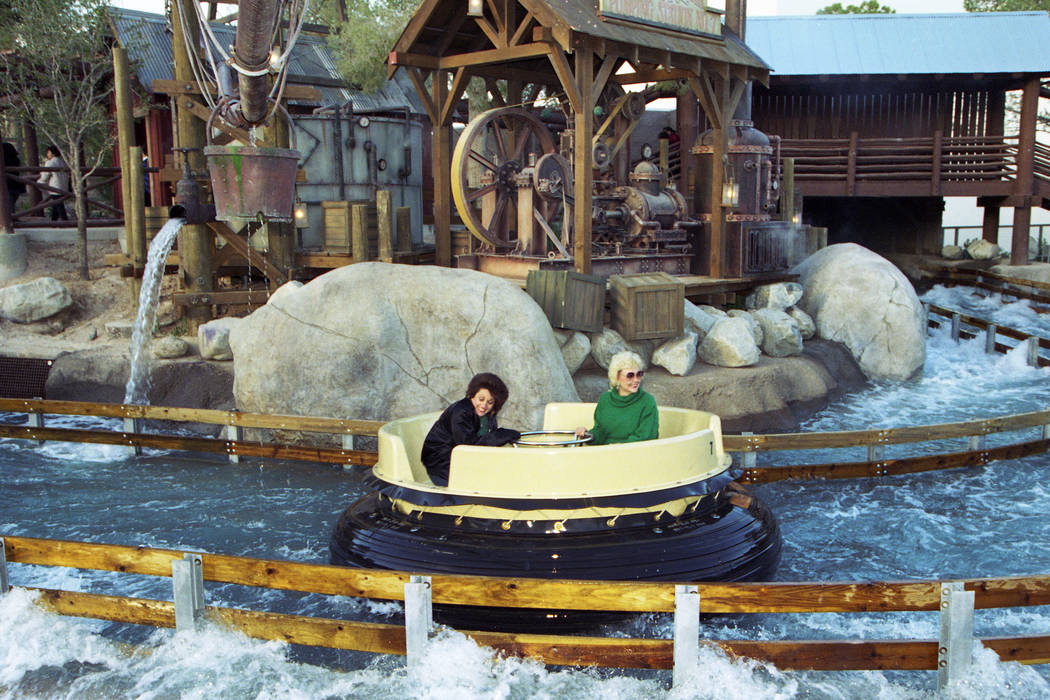 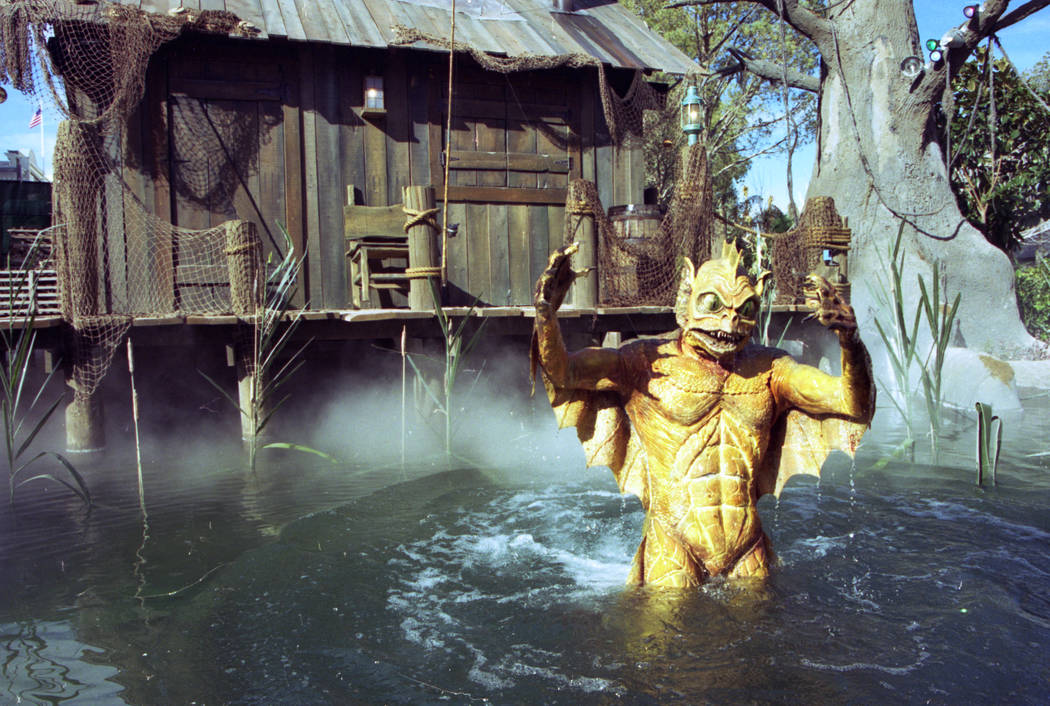 A swamp creature rises out of the water during the Backlot River Tour at MGM Grand Adventures Theme Park. The park opened to the public on Dec. 18, 1993. (Las Vegas Review-Journal file) 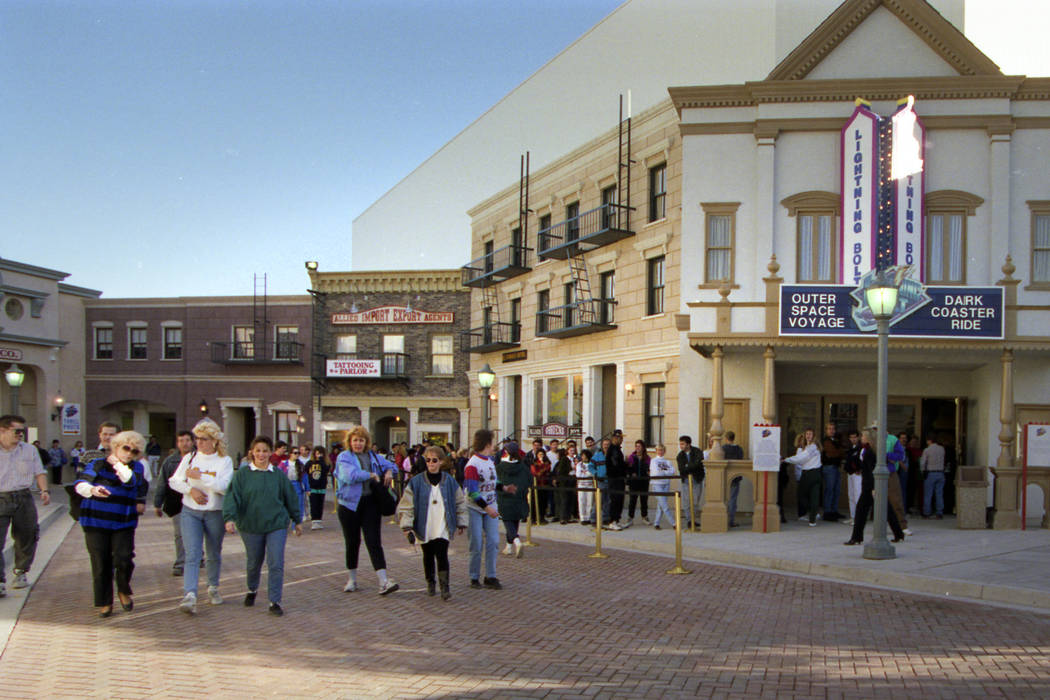 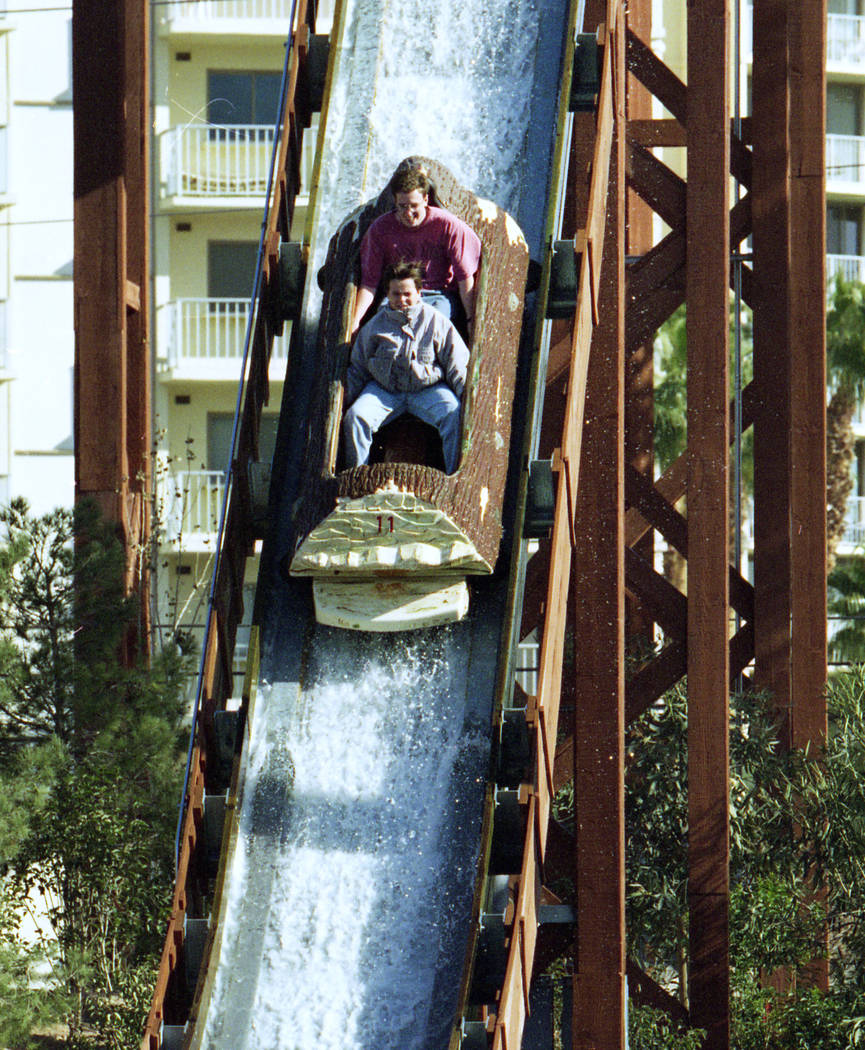 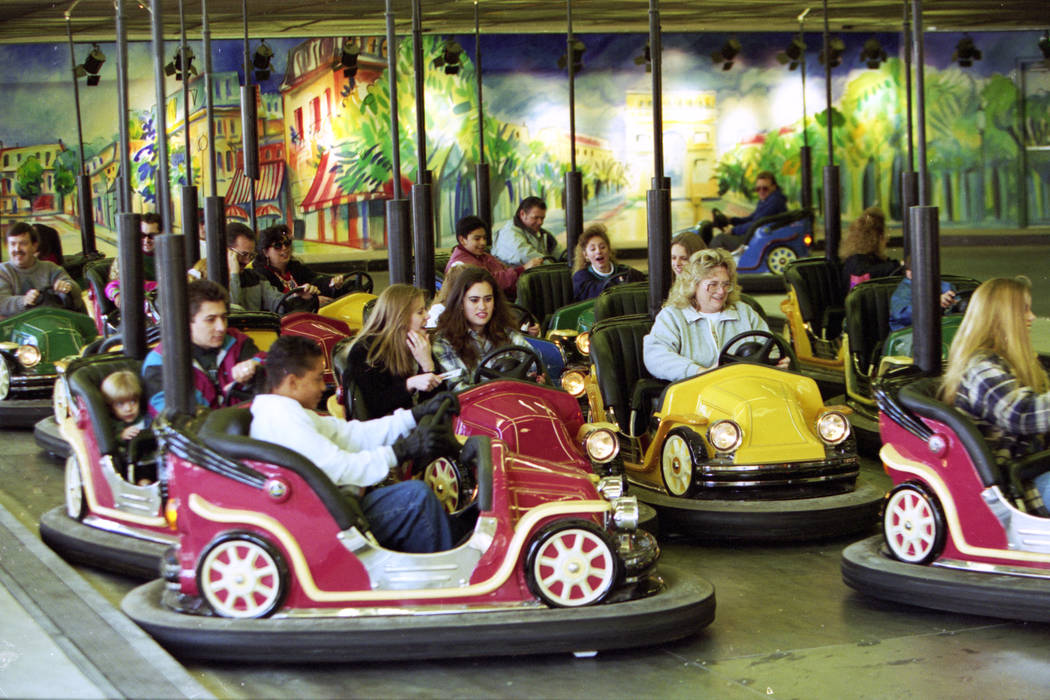 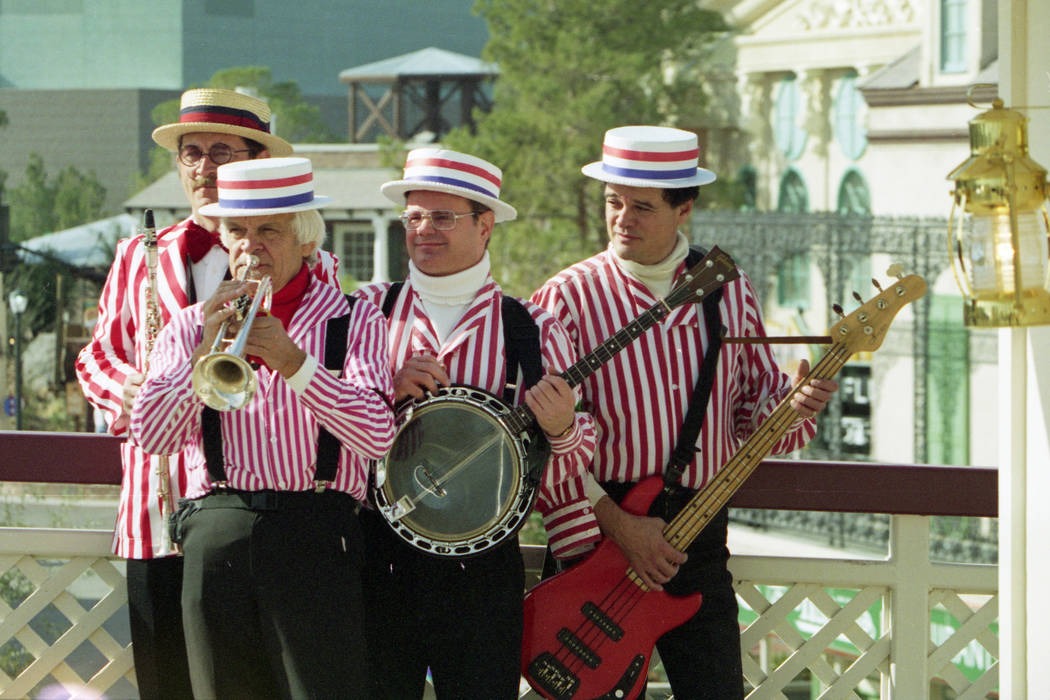 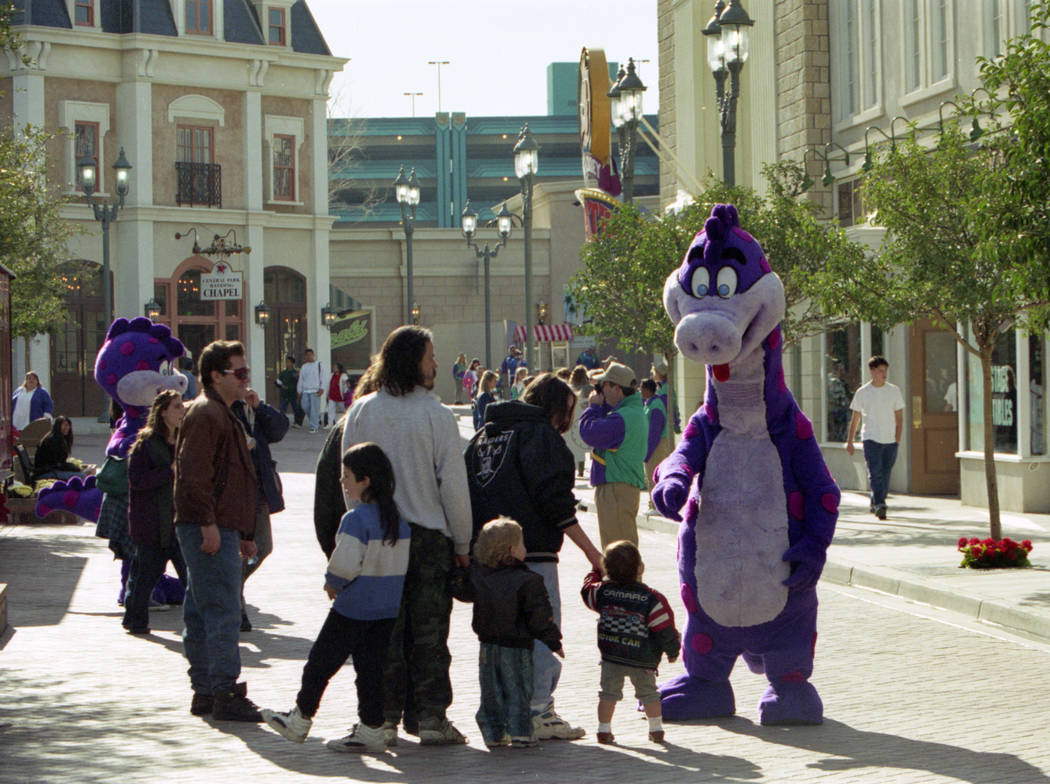 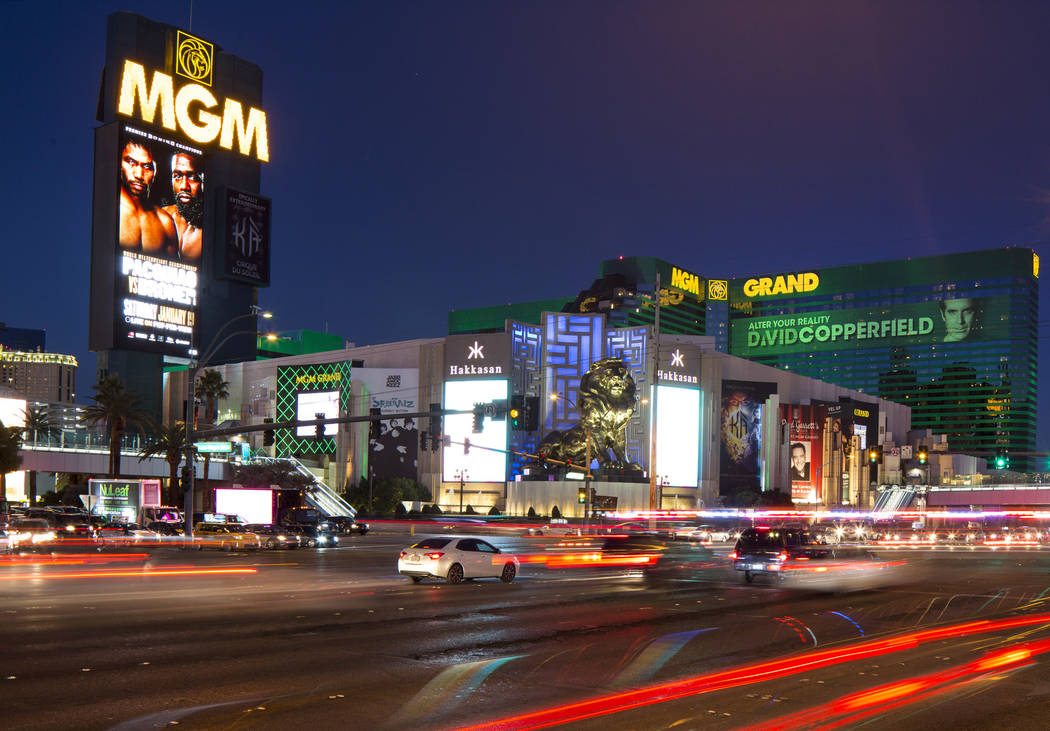 When the MGM Grand opened 25 years ago Tuesday, it was the largest hotel in the world and launched an era of growth that forever changed Southern Nevada.

It opened the Strip’s first large arena for sporting events and concerts, and a row of restaurants that established the arrival of celebrity chefs. Its Studio 54 sparked nightclub development in the city. It also was one of the first to bring residential property to the Strip and gave the company the confidence to go forward with the CityCenter complex, which includes the Waldorf Astoria, Crystals, Aria, Vdara and Veer Towers.

A dedicated three-story convention facility brought business travelers to the MGM Grand and inspired a greater interest in attracting conventions.

“In so many ways, everything that happened in Las Vegas in the last 25 years has happened at the MGM, whether that was trying to create a world-class, celebrity-chef, high-end food experience; to creating entertainment amenities that are quite different from the gaming floor; to creating mega-convention centers; to creating arenas that in turn feed everything,” said Bo Bernhard, executive director of the International Gaming Institute at UNLV.

MGM Grand also was the launching point of the Las Vegas Monorail as an alternative mass-transit system along the east side of the Strip.

Not every idea was a winner, but failings provided direction for the future. A theme park, MGM Grand Adventures, was a dud — but it helped make clear that while Las Vegas could cater to families, its sweet spot was still going to be entertainment for adults.

Bernhard recalls coming home from college at Harvard in 1993 and seeing the parade of new attractions the new Las Vegas had to offer.

“When the MGM opened, it was the first vision of Las Vegas after The Mirage,” said Blackhurst, executive vice president of government relations and corporate responsibility at Caesars. “And even though the theme park wasn’t initially successful, it set the stage that Las Vegas wasn’t just a casino city, it was an entertainment city. MGM Grand was all about customer service and driving a whole different class of tourists to Las Vegas.’’

The three properties that opened in 1993 were created by three developers who, at the time, were considered the casino titans of Las Vegas — Glenn Schaeffer of Circus Circus Enterprises (Luxor), Steve Wynn of Mirage Resorts (Treasure Island) and Kirk Kerkorian of MGM.

As a result of mergers MGM Grand’s parent company — MGM Hotels Inc. — had with Mirage in 2000 and Circus Circus (which had become Mandalay Resort Group) in 2005, MGM Hotels Inc. at one time owned all three of the showcase properties of 1993. The company sold Treasure Island to Phil Ruffin 10 years ago Sunday. MGM Hotels Inc. has since become MGM Resorts International.

The MGM Grand theme was “Watch us roar in ’94,” but the company got a once-in-a-lifetime entertainment opportunity at the end of 1993 and took advantage of it since the hotel was ready to open.

“We were ready and Barbra Streisand was available to open the MGM Grand Garden for a concert in December,” said Cynthia Murphy, president and chief operating officer of New York-New York. “So all of a sudden, it was like, We are not going to ‘roar in ’94,’ we are going to get open in ’93.’’

But the opening roar of MGM Grand was not without controversy, UNLV’s Bernhard said.

The abstract version of the lion entrance was a cultural faux pas a significant number of Asian visitors avoided. By 1998, the entrance was torn out and the lion entrance at the corner of Las Vegas Boulevard and Tropicana Avenue was modified with the addition of a 50-ton Leo the Lion atop a 25-foot pedestal, the largest bronze statue in the United States. MGM Grand is no longer the largest hotel in the world, but it is the largest in the country.

The theme park may have been the biggest failure.

“We forgot that California was our main feeder market,” Bernhard said. “We weren’t going to compete with the actual theme parks there. California showed up and was profoundly unimpressed, and of course that MGM theme park was not long for this earth. ”

On a hot streak

Bernhard noted that MGM Resorts International has learned from its miscues.

“You have to give MGM credit; they’ve learned,” he said. “For a while there, there was a period where CityCenter opened to tepid reviews and people were wondering if MGM was still a from-the-ground-up developer as it was during the peak Kirk Kerkorian years. But look at MGM now. They’re on a hot streak.”

He said that MGM National Harbor in Maryland, just outside Washington, D.C., is a showcase on a national stage. MGM Cotai, across the street from the luxurious Wynn Palace in Macau, holds its own with “the nicest thing Steve Wynn has ever built,” Bernhard said.

“And MGM Springfield is one of the best, if not the best, integrations in a very subtle, very respectful, very non-over-the-top way of a casino resort into an existing inner-city downtown area,” he said.

That’s all by design, according to Scott Sibella, president and chief operating officer of MGM Grand.

“We take our role as the company’s namesake seriously and strive to embody the best of what the Las Vegas Strip has to offer,” Sibella said.