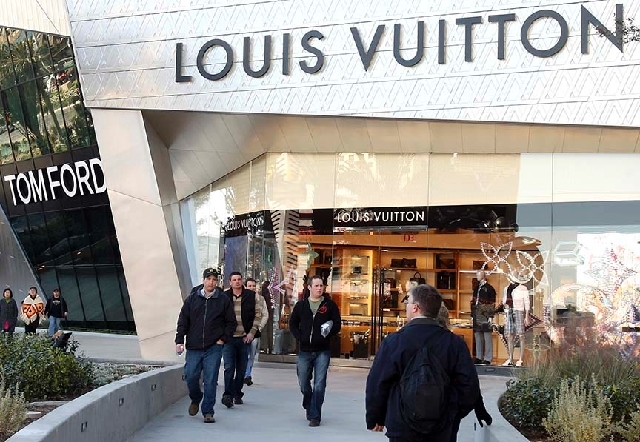 MGM Resorts Chairman Jim Murren said the company has fielded "three or four inquiries" about selling Crystals. "The value of Crystals is high to us," he said.

MGM Resorts International narrowed its second-quarter net loss but improved revenues companywide, which included a 3.4 percent hike from customer spending on the Strip.

Analysts surveyed by FactSet Research were expecting profit of 1 cent a share.

Companywide revenues increased 6.8 percent to $2.48 billion. On the Strip, where MGM Resorts’ operations include the MGM Grand, Bellagio, Mandalay Bay and the CityCenter complex, overall revenues grew 3.4 percent to $1.25 billion.

“These results are better than some of the most recent buy-side expectations going into today,” JP Morgan gaming analyst Joe Greff told investors.

Analysts were fearful of a steep drop by MGM Resorts after Nevada released gaming revenue figures on Friday showing a more than 10 percent decline in Strip gaming revenues June.

“Strip is on a positive pace,” Murren told analysts during a conference call.

Sales of residential units in Veer Tower and the Mandarin Oriental have improved and there is interest from potential buyers of the Crystals retail component. Murren said the company has fielded “three or four inquiries” about selling Crystals.

“The value of Crystals is high to us,” Murren said. “I can’t say what will happen.”

MGM China, the company traded on the Hong Kong Stock Exchange which runs the company’s holdings in Macau, declared a special dividend of $113 million, payable in early September. MGM Resorts owns 51 percent of MGM China and will collect $57 million of the dividend. MGM China has returned $312 million to MGM Resorts tis year.

MGM Resorts also disclosed new details of the under-construction $2.6 billion MGM Cotai, which is expected to open in 2016. The property will have an atrium area “three times the size of the Bellagio” and other entertainment venues,” Murren said.

MGM Resorts said the quarter included a noncash impairment charge of $37 million related to the company’s joint venture investment in an Illinois riverboat casino. MGM Resorts also recorded an impairment charge of $45 million related to corporate buildings that will be removed to make way for the company’s planned $350 million arena development on the Strip.

“We are pleased with MGM’s second-quarter results on the Strip, particularly as slot revenues increased 7 percent year-over-year,” Credit Suisse gaming analyst Joel Simkins told investors. “In our view, property-level investments and other initiatives are starting to pay off for MGM as the portfolio appears well-positioned into second half and 2014.”