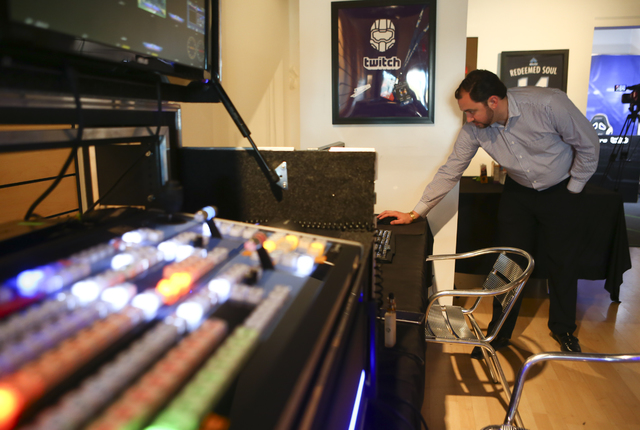 Nick Fotheringham, vice president of content and development at Millenial Esports, works in an office at Neonopolis in downtown Las Vegas on Wednesday, Oct. 26, 2016. Millennial Esports is creating a large e-sports venue at Neonopolis with a slated opening in November. Chase Stevens/Las Vegas Review-Journal Follow @csstevensphoto 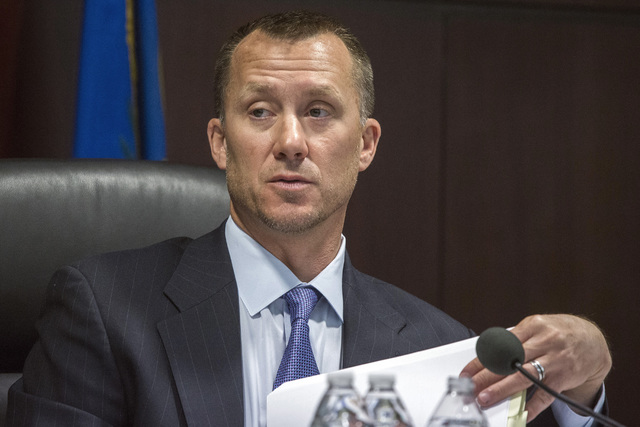 It won’t be long before people will be able to bet on teams competing against each other when they play video games.

Teams also will be able to bet against each other in a modified poker-style format in which the house will rake a percentage of the head-to-head bets.

But bettors will have to wait a little longer — maybe forever — before they will be able to play daily fantasy sports games in casinos.

Workshop meetings for public discussion could start as early as next month, and casinos that choose to conduct e-sports wagering might be able to take bets by early next year.

The committee also agreed not to recommend any changes in law that would put daily fantasy sports on an easier track to operate in Nevada.

The committee, which met for the last time this year before the submission of bill drafts for the 2017 legislative session, determined that most of the rules are in place to conduct wagering on e-sports and it’s only a matter of tweaking existing regulations to enable casinos to take bets on teams playing games like World of WarCraft.

But, after two committee sessions and at least two one-on-one meetings between regulators and proponents of daily fantasy sports, no agreement was reached that would enable fantasy players the ability to participate in games sponsored by companies such as FanDuel and DraftKings.

Daily fantasy sports supporters urged state leaders to amend legislation that would classify daily fantasy as a game of skill. State gaming experts consider fantasy sports as games of chance and have required that companies that conduct those games be licensed as gaming companies by the state.

FanDuel and DraftKings have been reluctant to do that because if they admit in Nevada that they operate a game of chance, they could run into conflicts in other states and at the federal level by officials that deem them skill games. Because Nevada is a relatively small market, the companies have opted to pass on operating in the state.

But after testimony from five e-gaming experts Wednesday, committee members embraced moving ahead in what’s described as one of the fastest-growing sectors in the industry.

Experts believe the level of illegal wagering on e-sports could rise to $23 billion by 2020. While experts aren’t expecting a massive shift to betting on video-game play, they believe that the growth of the market bodes well for the industry. They see it as an opportunity to capture a demographic that has no interest playing slot machines, and there is revenue to be made on other amenities — food and beverage, hotel rooms and nightclubs — if they can get them in the door with video-game tournaments.

Some see the e-sports phenomenon paralleling the fast rise of the popularity of mixed-martial-arts sports. Las Vegas became the market leader for the Ultimate Fighting Championship brand by embracing the sport and its UFC bouts; committee members see a similar prospect if the city embraces e-sports in the same way.

“The six biggest UFC fights have been staged in Las Vegas, and the same could be the case if a market is developed for big (e-sports) tournaments,” Gaming Commission Chairman Tony Alamo said.

“It’s a match made in heaven,” Schorr said.

He added that Downtown Grand stages frequent competitions and that Millennial Esports has built an arena for e-sports at Neonopolis in downtown Las Vegas. A Halo tournament event is scheduled there Friday through Sunday.

Among the details regulators will have to sort out is how to prevent cheating and match fixing and what types of competitions wagers could be taken.

Ian Smith, integrity commissioner for the UK/EU E-Sports Ethics Commission, said the industry has to be wary of players who get an advantage through software weaknesses, online attacks that slow or disable opponents, standard match fixing and even doping. He said 92 percent of match-fixing occurs as a result of betting fraud.

Most of the competitions occur online, but state leaders are looking to allow wagers only on “terrestrial games” that aren’t as vulnerable to outside attacks.