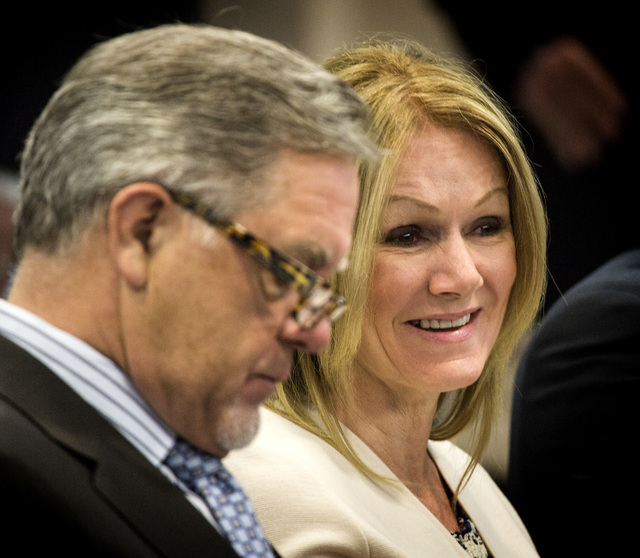 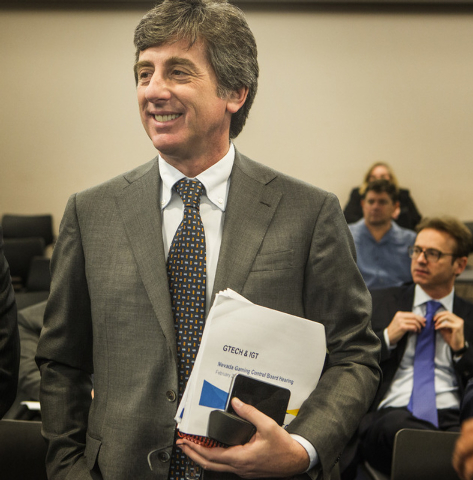 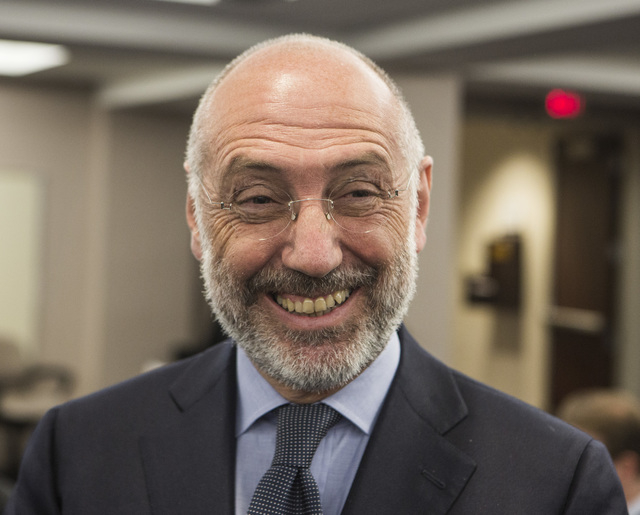 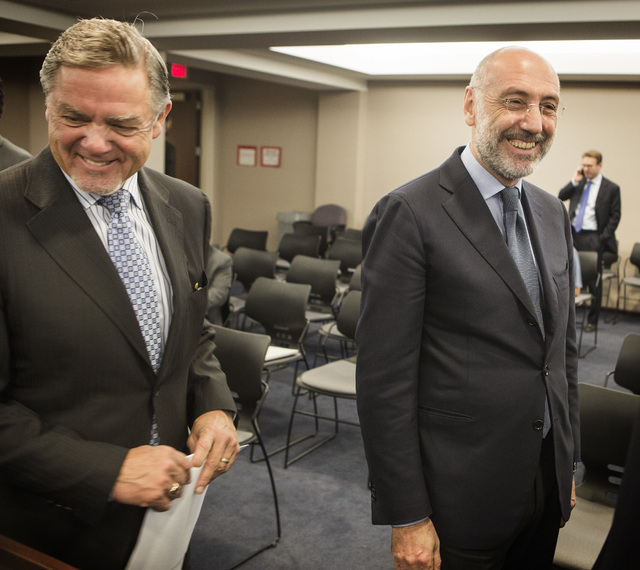 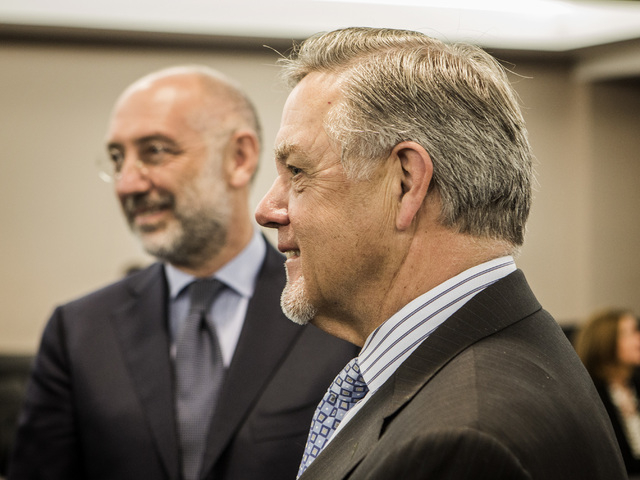 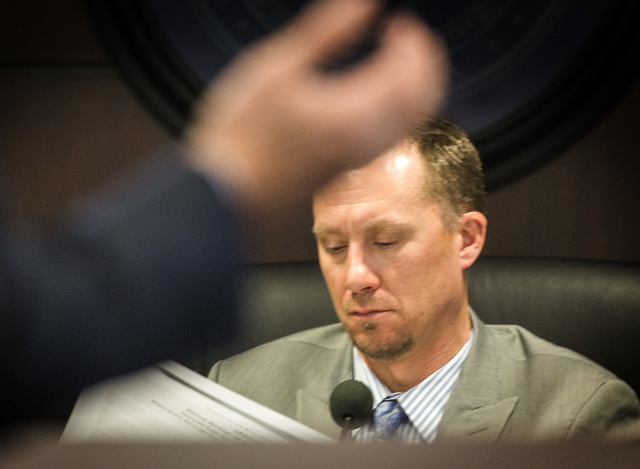 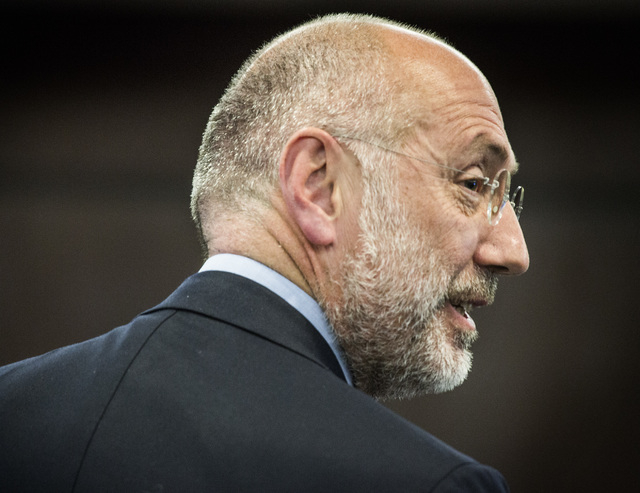 The combined companies will be branded as IGT, and the holding company will be named International Game Technology PLC. The GTECH name is expected to disappear in about a year.

The corporate headquarters will be in the United Kingdom, and IGT will maintain operating headquarters in Las Vegas, Rome and Providence, R.I. The company will be traded on the New York Stock Exchange under the symbol IGT.

The merger had been approved by 17 out of 22 regulatory agencies. The deal is expected to close in mid-April, GTECH executives said.

Marco Sala, the CEO of GTECH who will remain as CEO of the merged company, said the transaction “brings together two highly complementary legacy businesses.”

Sala said the IGT name and branding that includes elements of GTECH’s logo “reflects this positioning.”

Sala and many other GTECH and IGT executives packed the Las Vegas hearing room in the Sawyer Building.

IGT agreed last summer to be acquired by GTECH for $4.7 billion in cash and stock and assumption of $1.7 billion of the slot maker’s debt.

Earlier this month, GTECH said it completed $5 billion in high-yield financing needed to complete its buyout. The pricing of the high-yield notes included $3.2 billion in American dollars and 1.6 billion in Euros.

During the presentation to regulators, GTECH and IGT executives spelled out several key rationales behind the transaction, which they said will merge the gaming industry’s No. 1 lottery provider with the world’s largest slot machine manufacturer.

The company also plans to expand its presence in Nevada, with the global gaming operating unit headquartered at IGT’s offices in Las Vegas and the company’s Reno facility becoming a primary manufacturing hub. The company will have design studios in Reno and Las Vegas and locate its strategic sales hub in Nevada.

“This appears to be good for both companies and good for the state of Nevada,” Control Board member Shawn Reid said.

The company’s North American Gaming headquarters will have global responsibility for the product development, manufacturing, marketing and sales of all of the company’s gaming offerings.

IGT’s slot machine and game development will be integrated into North America Gaming, which will also include interactive and sports wagering products and DoubleDown Casino, the company’s social gaming business.

North America Lottery will have global responsibility for the product development, marketing and sales of all the company’s lottery equipment.

The transaction is expected to result in $280 million in cost savings.

Sala said the combined company will spend $332 million on research and development, far more than any other gaming equipment manufacturer.

When the deal was announced, company officials said the combined IGT-GTECH entity would have more than $6 billion in revenues and more than $2 billion in cash flow based on the 12 months that ended in March 2014.

“Carrying on the IGT company name is a testament to the strength of the IGT brand and its relevance in the newly formed organization as we work together to create the world’s leading end-to-end gaming company,” Hart said.

In the lottery business, GTECH has 79 percent market share in all U.S. wagers and serves 38 out of the 45 state lotteries. GTECH has an historical relationship with the three largest state lotteries in the United States: New York, California, and Texas.

Sala said the combined have the leading presence in the Video Lottery Terminal business in the United States and Canada.

Current GTECH Chairman Lorenzo Pellicioli is CEO of the De Agostini Group, which will own 50 percent of the new IGT.