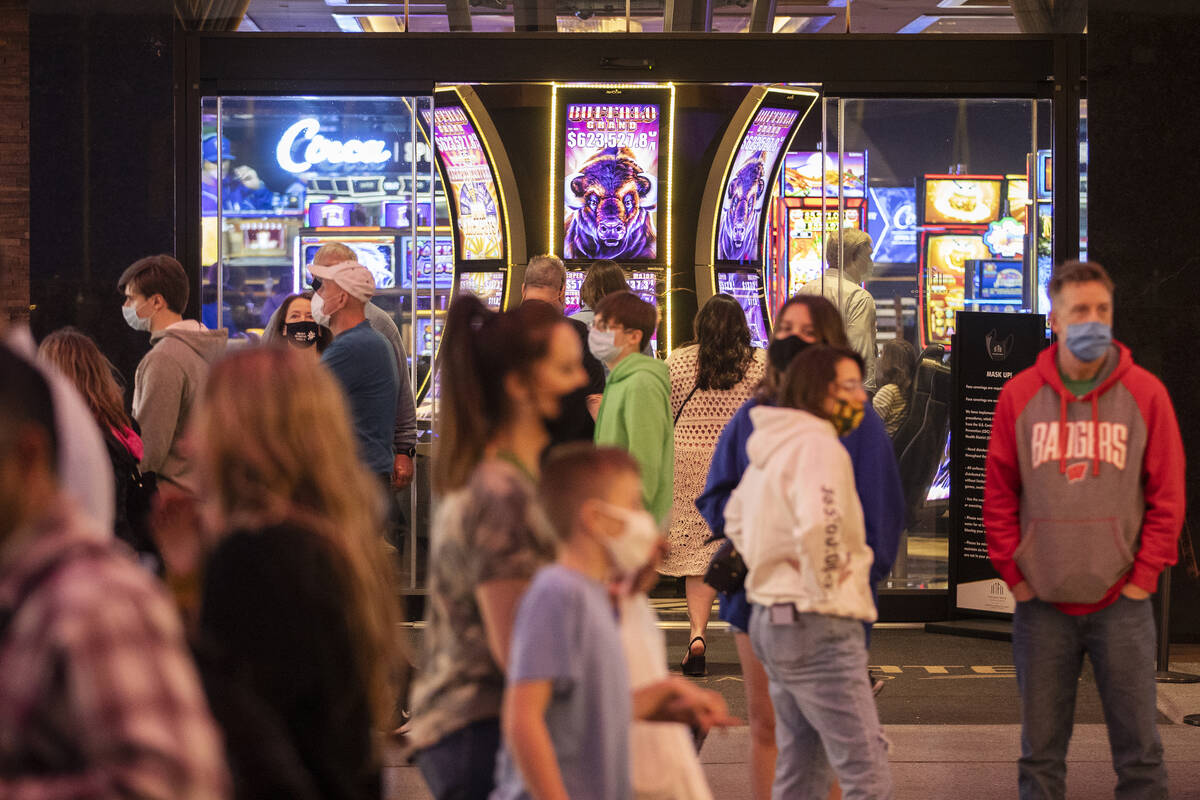 Nevada has produced its share of gaming revenue records this year, so it stands to reason that the American Gaming Association is indicating commercial gaming revenue nationwide will reach its highest level ever this year.

And that’s without all of the numbers from November numbers in and nothing yet from December.

The AGA on Wednesday affirmed that more than $44.15 billion has been collected by the nation’s 987 commercial casinos so far in 2021. Several states reported their November revenue figures in the last week. The previous record, set in 2019, was $43.65 billion.

One of the states expected to have strong results — Nevada — won’t report November figures until the end of this month, with December revenue to be reported at the end of January.

“When full-year numbers are in, we expect commercial gaming revenue to come in around $50 billion — a remarkable turnaround for our industry that was devastated by COVID-19,” said AGA Senior Vice President Casey Clark. “Our historic recovery is a testament to gaming’s world-class hospitality and entertainment experiences.”

Casino gambling continues to drive the industry’s recovery. Through October, slot machines and table games generated a combined $34.22 billion in revenue, with $27 billion coming from slots.

Sports betting generated $3.16 billion in revenue through October — up 359 percent over the same period in 2019. Sports betting has grown significantly since October 2019, when only 13 states had live, legal betting. Currently, 30 states and Washington D.C. have legal, live sports betting.

“From a revenue standpoint, 2021 has been a remarkable year for gaming,” said Brendan Bussmann, director of government affairs for Las Vegas-based Global Market Advisors. “While we still have a month until it closes, it continues to show consistent records all around. It continues to show that gaming is a strong form of economic development and contributions to economies throughout the United States.”

Bussmann said several things have contributed to the banner year.

“There are a number of factors that have contributed to this effort, including pent-up demand from the government mandated shutdowns but also some of the additional money that has been recirculated into the economy from either stimulus or savings during the Great Shutdown,” he said. “The challenge ahead is to maintain those numbers in some cautionary headwinds of inflation, fuel costs and tightening on discretionary income.”

The revenue trends bode well for the industry. An AGA panel of 24 casino company CEOs surveyed last month found that half of them plan to invest capital in hotel and food and beverage amenities, while 43 percent say they’ll upgrade slot machines on casino floors.

Three-quarters of gaming equipment executives say they expect increased sales of gaming units for their floors in 2022.

‘Not a flash in the pan’

Last month, the AGA indicated it was relatively certain 2021 would be a banner year for casinos after a record third quarter was reported, following a record second quarter.

“Two straight quarters of record gaming revenue is an incredible accomplishment in any context, let alone after the most challenging year in industry history,” AGA President and CEO Bill Miller said after third-quarter results were announced in November.

“Our recovery is not a flash in the pan, but rather a sustained result of our leadership in responsible reopening, world-class entertainment offerings and widespread favorability,” Miller said.

On the Strip, gaming revenue also hit an all-time high of $2.06 billion. The record was driven, in part, by the steady return of tourism. 9.2 million people visited Las Vegas in the quarter, a nearly 10 percent increase over the second quarter and the highest quarterly visitation level since the outbreak of COVID-19 in March 2020.

“With brick-and-mortar gaming setting records, the expansion into new verticals, and domestic and international tourism recovering, the industry is in a strong position for a full recovery,” Miller said. “I’m confident that the return of meetings, conventions and international travel will further accelerate gaming’s recovery in 2022.”

How long will this be going on

How long the casino boom will last is unclear, but Bussmann said there’s plenty of room for growth in Nevada.

“The biggest question remains on how long this will be sustained, especially considering some parts of the industry still are in recovery mode while under record revenues,” he said. “The industry will need to continue to revisit in the experience to continue to provide a strong product under the continued health and safety measures.

“Areas like Las Vegas still will see a bump when conventions fully return and the international customer is able to return on a regular basis,” Bussmann said. “Those will likely see bumps with the omicron variant )of COVID-19) in the short term but the opportunity for long-term recovery is strong.”