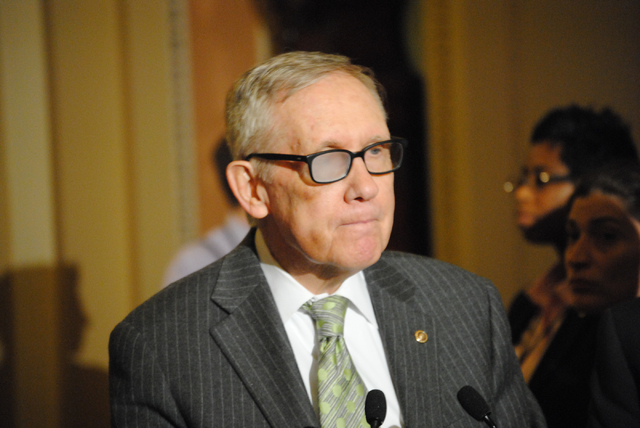 WASHINGTON — Sen. Harry Reid acknowledges using his clout to speed visa applications for wealthy foreign investors in the SLS Las Vegas resort, and said whistleblowers who had a problem with that are “a bunch of whiners.”

“If I had to do it over again, I would do it again,” Reid said. “If I did it over again I would probably be stronger than I was.”

Reid also offered to do the same for investors in Resorts World Las Vegas, the mega-resort being built by the Malaysia-based Genting Group across the Strip from the SLS, on the site of the unfinished Echelon Place.

“Every one of the moneys that comes to our country, that comes to Nevada, creates jobs,” Reid said. “It creates economic development. That’s what we need.”

Reid defended his actions to speed the visas during an interview Friday on KNPR, Las Vegas public radio. In the same interview, he discussed his decision to retire from the Senate when his term expires at the end of 2016.

His remarks come on the heels of a report issued last week by the Department of Homeland Security inspector general that faulted a top department official for intervening in the Las Vegas visa case after being contacted by Reid.

Alejandro Mayorkas, the No. 2 leader in the Department of Homeland Security, also improperly intervened in two other visa cases involving prominent Democrats including Virginia Gov. Terry McAuliffe, former Pennsylvania Gov. Ed Rendell, and the brother of Hillary Clinton, according to the inspector general.

The incidents occurred between 2011 and 2013, when Mayorkas was head of U.S. Citizenship and Immigration Services. The agency runs the EB-5 program, which grants green cards to foreign nationals if they invest at least $500,000 in a development project that creates or saves at least 10 full-time jobs.

Inspector General John Roth told the House Homeland Security Committee on Thursday he began an investigation into the handling of EB-5 visas after receiving complaints from an unusually large number of 15 whistleblowers.

Roth said Mayorkas did not appear to break any laws, but did violate department ethics by creating an appearance of political favoritism. House committee chairman Rep. Mike McCaul, R-Texas, said Mayorkas was being invited to a followup hearing “to tell his side of the story.”

In the Las Vegas case that emerged in late 2012, USCIS officials said they felt pressured to move the SLS visa applications to the front of the line, and by a Mayorkas promise that they would provide Reid with regular weekly updates on their progress.

Roughly 230 SLS investors sought visas, according to the IG report. The agency was told that not adjudicating the applications by Feb. 4, 2013 could put project financing at risk. But EB-5 visa applications are rarely expedited, and in this case bureaucrats believed that delays were the fault of the applicants.

“Listen, the homeland security report came from a bunch of whiners at the Department of Homeland Security,” Reid said. “They felt, I guess, they weren’t included in my conversations. Maybe I should have called them.”

“One of the problems we have with government… is people take too long to make decisions,” Reid said. “Basically what I said was, ‘Listen, Nevadans have had some bad economic situations. We have people who want to invest at least $500,000 in Nevada. You get this process as quickly as you can. Stop waiting around.’”

“I did everything I could to make sure the law was effectuated the way it was supposed to be,” Reid said.

The EB-5 program has been criticized for uneven management, and the IG report cited “ad hoc decision-making in the SLS case” to the point where some senior EB-5 officials “were not even aware the request to expedite had been granted.”

In a statement to investigators, Mayorkas said he became concerned that the agency’s refusal to speed the Las Vegas visas “was improper, a violation of its own expedite criteria.”

He said he learned from senior staffers early in 2013 that USCIS was not adhering to the criteria. “I believe that around this time the agency and I also received communications from Senator Harry Reid and his staff expressing concerns about the same problem,” he said.

In an interview with IG representatives, Mayorkas said his involvement in the SLS care was limited and “as needed” to resolve legal and policy issues that had arisen.

On Jan. 8, 2013, Mayorkas spoke with Reid on the phone. Investigators said they were told he made no guarantees but told Reid the USCIS would take a “fresh look” at the request to speed visa processing.

On Jan. 31, Mayorkas had a teleconference with Reid staffers in which investigators said it appeared he delivered the news that substantive issues could not be resolved by Feb. 4. It is unclear in the end how many visas were granted to SLS investors.

McAuliffe also defended his actions on a Richmond, Va., radio show last week. He was pushing for visa approvals for fellow investors in Green Tech Automotive, an electric car company.

The lobbying took place before McAuliffe became governor in 2014, although he still was a prominent political figure through personal and political ties to Bill and Hillary Clinton.

“I was angrier than heck at all these people,” McAuliffe said. “They tell you if you get an applicant in, they will make a decision (in) six months, on their website. Well, I got to tell you, when you’re sitting there with someone’s deposit, waiting for a year, a year and a half or two years, you would be angry.”