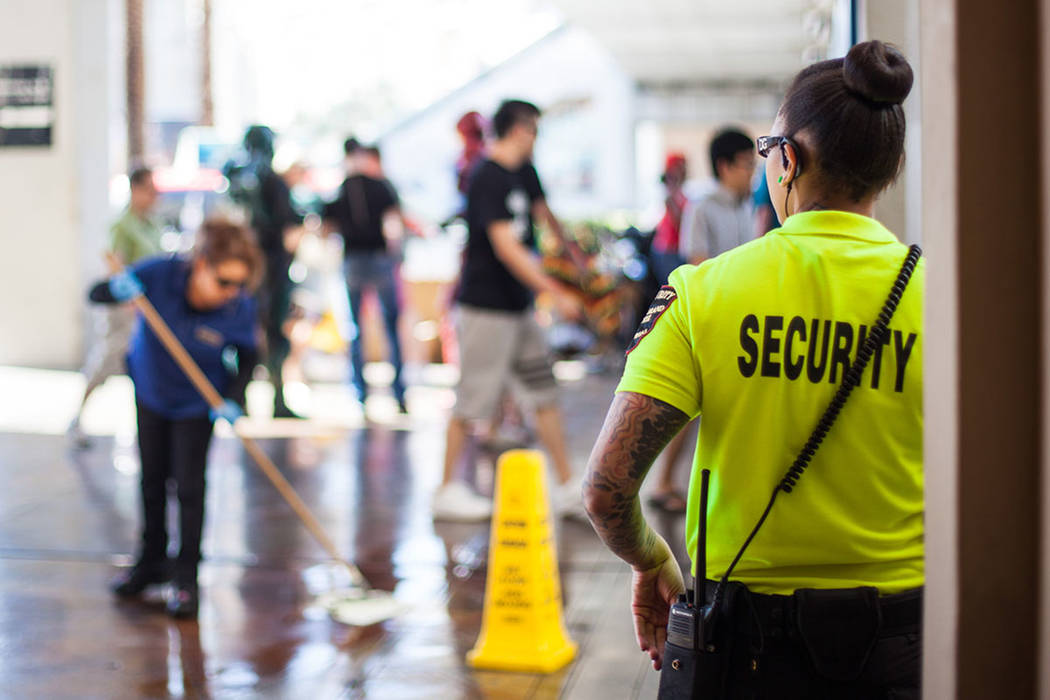 A security guard stands outside of the MGM Grand in Las Vegas in 2015. (Chase Stevens/Las Vegas Review-Journal) 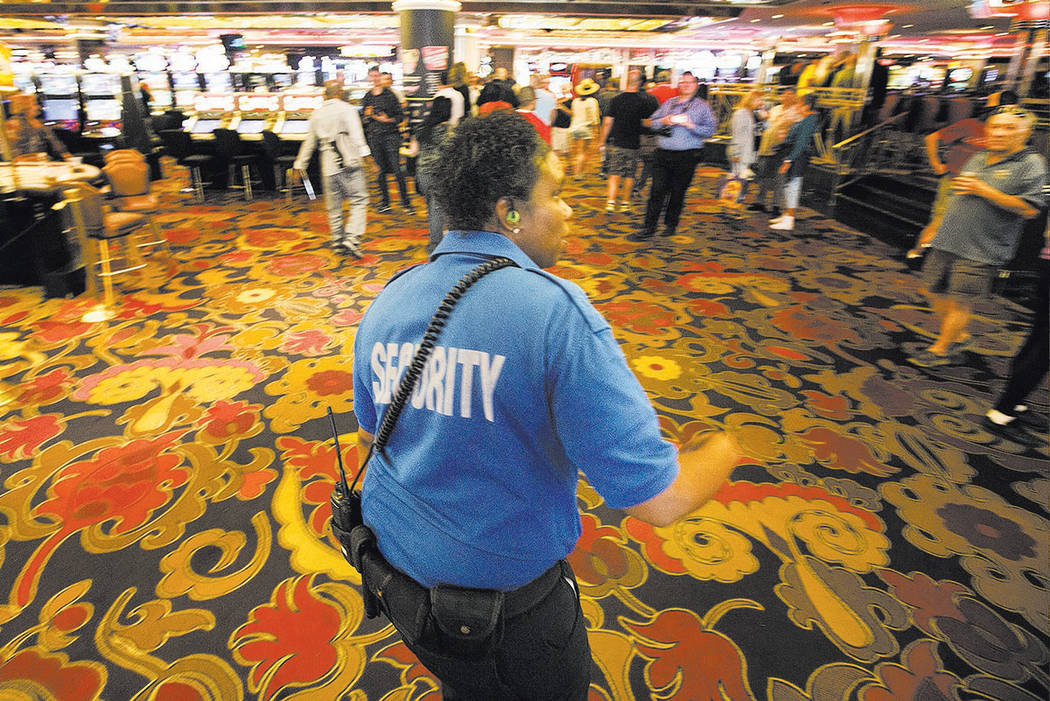 A security officer escorts the last of the gamblers out of the Riviera hotel-casino in 2015. (Las Vegas Review-Journal)

Like a sharp poker player, Las Vegas casinos keep their cards close to their vests when it comes to security.

Few, if any, are willing to say how many security personnel they have on staff, how many work during a particular shift and exactly what training they receive. That picture might become a lot clearer when judges start to hear cases filed by victims of the Oct. 1 massacre by a shooter at Mandalay Bay.

MGM Resorts International, the parent company of Mandalay Bay, declined to specify how many security guards it has on staff.

The casino operator said it regularly works with local and national law enforcement and private security consultants to make sure its security program at its properties is up to date.

“Security has been and continues to be a top priority,” spokeswoman Debra DeShong said.

“Every aspect of their security is going to be examined,” he said. “In cases like this, it all comes down to prevention. Would security or additional security have prevented the incident?”

It is not something that is easy to prove.

The law holds that a hotel must act reasonable at all times, a fuzzy notion that is determined on a case-by-case basis depending on the circumstances, Kutner said.

Even if the 3,000-room Mandalay Bay had fewer security on staff in the days leading up the shooting compared with similarly sizedMonte Carlo, it would not necessarily indicate insufficient security.

There are also no regulations determining just how many security personnel a Strip casino should have, just as there are no standards for shopping malls and many other businesses.

Nor are there strict guidelines for how many security guards should be armed or whether bomb-sniffing dogs should be employed. And there are no standards stating how many cameras should be used in nongaming areas or whether they are needed in hotel hallways.

Mandalay Bay recently added guards by the elevator banks to check for room keys. Some Strip properties have been doing that for years. Others still don’t.

Each Strip casino has to take into account several factors when determining a proper number of security personnel. They might include the number of visits, daily revenue, floor size, quantity of shops, number of exits and building towers.

Casinos might also need to take into account the number of crimes on their property or in their area, Kutner said.

Mandalay Bay might need less security because the south Strip is quieter compared with the center of the Strip.

“There are no carbon copies,’’ said C. David Shepherd, former head of surveillance at The Venetian, referring to casino security programs.

Heads of security at Las Vegas casinos, though, do meet monthly to discuss security issues and share best practices.

Comes down to money

Strip casinos might have from 30 to 50 security employees on duty depending on the day of the week and time of the shift, according to several security experts.

There are standard posts near casino entrances, elevators and parking lots while others are assigned to walk the property, pressing buttons that signal they have checked an area.

The Riviera, which closed in 2013, had 20 to 25 security workers on a shift before economic troubles caused it to slash that number in half, said Doug Poppa, who ran security at the casino from 2003 to 2012.

The Riviera probably had the smallest security staff among Strip properties, he said. Like most Las Vegas casino properties, the Riviera had no cameras in the hotel hallways.

The Oct. 1 shooting has raised many questions about security, including whether there should be cameras in the hallways.

Poppa, who also worked at MGM Grand in the 1990s, said he believes about five Strip properties have them, including Tropicana, MGM Grand, Stratosphere and Caesars.The Palms, which is considered off-Strip, has them too.

The cameras are mainly to protect the properties from personal injury liability and are rarely watched in real time, security experts say. It can cost hotels millions of dollars to install cameras in hallways as wires have be run through the walls, Poppa said.

“The issue of security always comes down to money,’’ said Poppa. “Surveillance and security is a nonrevenue-producing department.’’

Security consultants, Las Vegas police and Gaming Control Board officials in general did not voice concerns over the size of staffing at Strip casinos, but Poppa felt they lacked some measures such as K-9 explosive detection teams, which might have been able to pick up residue on Paddock’s weapons and ammo.

Tommy Burns, a former Henderson chief of police and security consultant for casinos, said properties “typically have an adequate number of security people on the floor.”

Nonetheless, he expects they will be beefing up after the shooting as a precaution, including potentially arming more officers.

Poppa said about 70 percent of properties had ”totally unarmed security” when he was working.

The quality of security staff is just as important as quantity, said Doug Florence, who ran security and surveillance at several Las Vegas properties.

Florence was hired by the Hard Rock in 2010 after it was discovered some of its security staff members were involved in criminal activity on property.

“What is more important than the head count is the training and management,” he said, adding Hard Rock security and training budget improved even as its staff was reduced from about 250 to 150.

MGM said all of its security staff undergo initial training led by its in-house team. That is followed by regular training and evaluation.

“For specialized topics, we engage top current and former law enforcement experts, particularly from the LVMPD, to further enhance our training program,” MGM said in a statement.

MGM did not say how long the initial training lasted.

Most casinos put their security staff through 40 to 60 hours of training that includes using handcuffs, pepper spray and conducting arrests, Burns said. If they are armed, there is more training.

Poppa said armed guards at Riviera trained three times a year, during which they would be drug-tested.

It rarely happens that a security guard has to pull his gun. During the day, security mainly spend their time helping customers, such as giving directions, Burns said.

As evening turns into late night, they have more calls to handle sick people, intoxicated people and disturbances.

Florence said the size of a security staff can be misleading. The properties regularly hire part-time security employees who might not have benefits and need to work several jobs.

“You can have a lot of people, but if they are on call and have to work a second job, they can be fatigued,” Florence said. “If you are providing benefits, they are more loyal and more committed to their responsibility.”

MGM did not give a percentage but said its security staff is “overwhelmingly full-time.”

Hourly wages for nonmanagerial casino security staff is in the mid-teens, according to job postings. That is about 50 percent below Clark County industry average, according to Las Vegas research firm Applied Analysis.

Many security guards, especially senior staff, have police, military or national security backgrounds. But the low salaries keep many more of them away.

Reliance Security, a Las Vegas-based security company, has received two inquires after the Oct. 1 shooting from Strip casinos to carry out an assessment for any vulnerabilities, chief operating officer Joel Logan said.

In an interview with Fox TV last month, Steve Wynn said he hired consultants, including former New York City Police Chief Ray Kelly and members of Navy SEAL Team 6 two years ago to carry out an assessment of his property. Wynn said he had to recruit and expand security by tens of millions of dollars.

Burns believes there will be a return to more armed security at properties, a practice that was curtailed in the 1990s amid concerns over liability issues.

“The Oct. 1 event may speed that up, but it was trending that way,” Burns said.