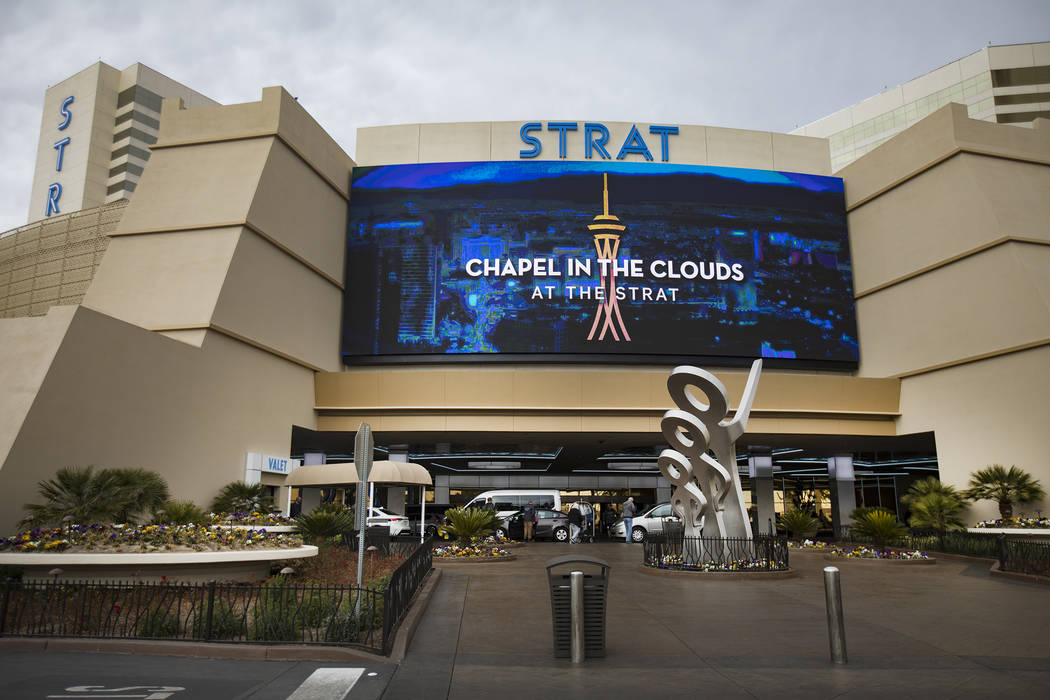 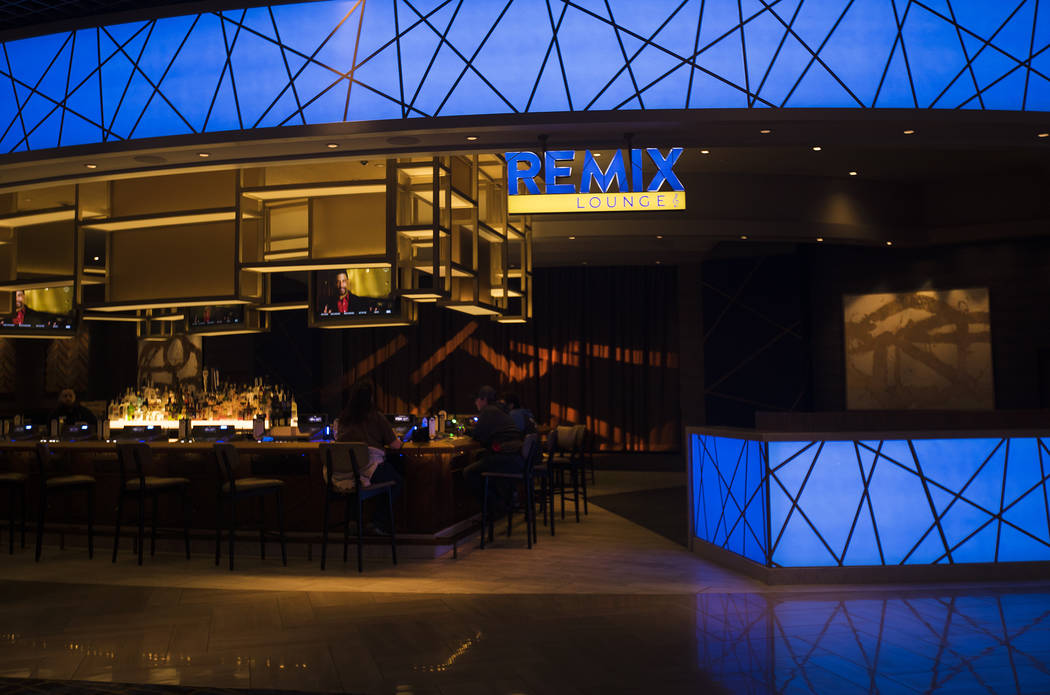 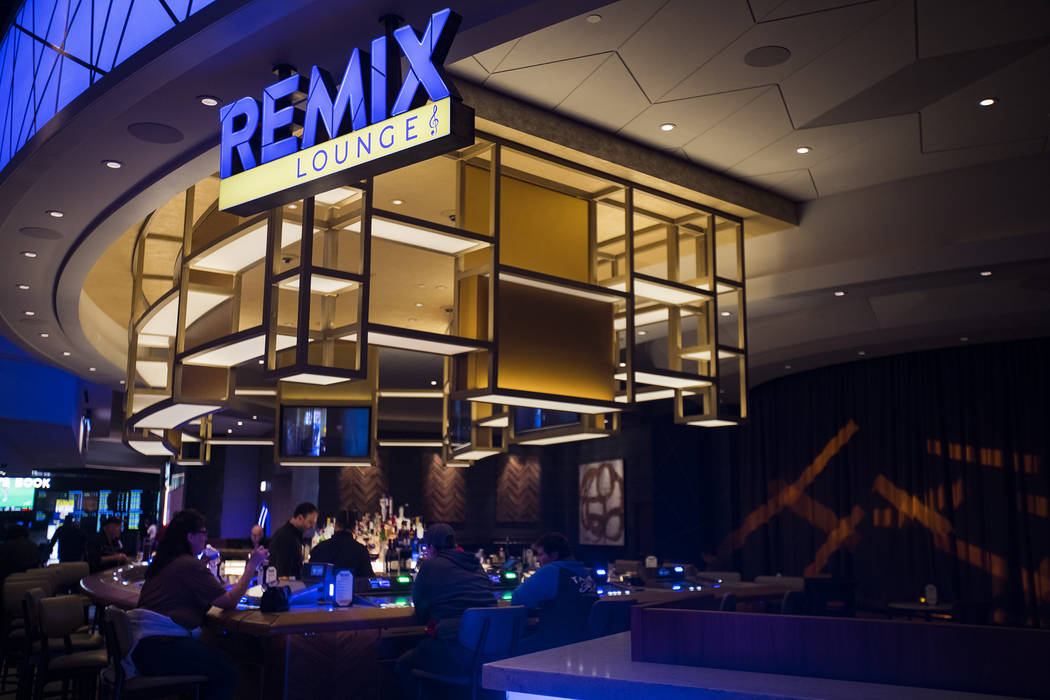 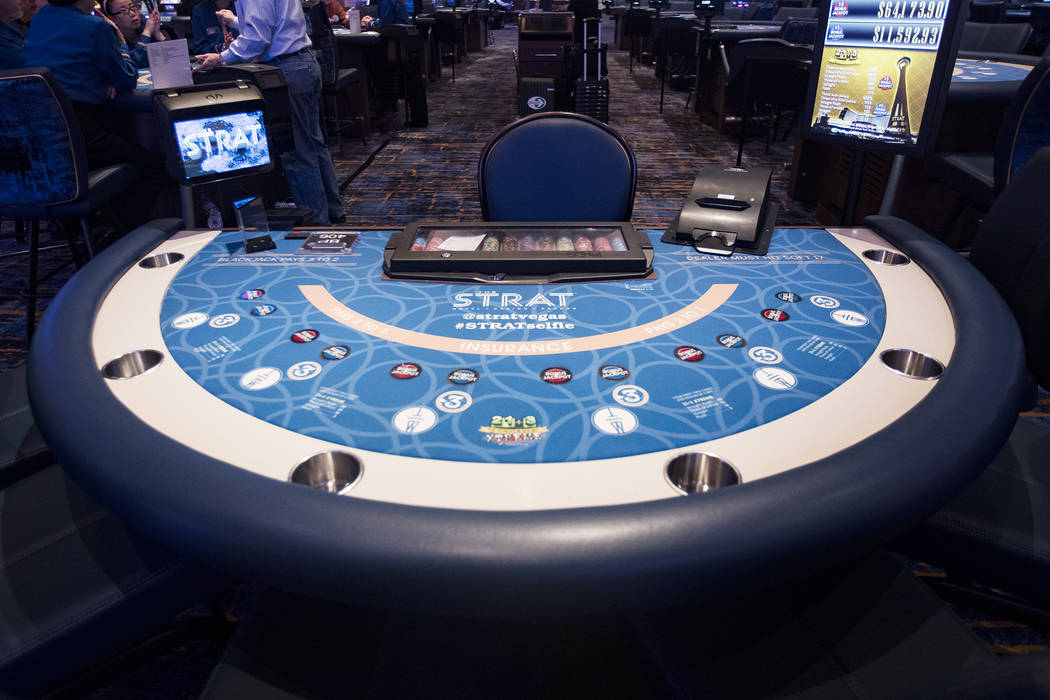 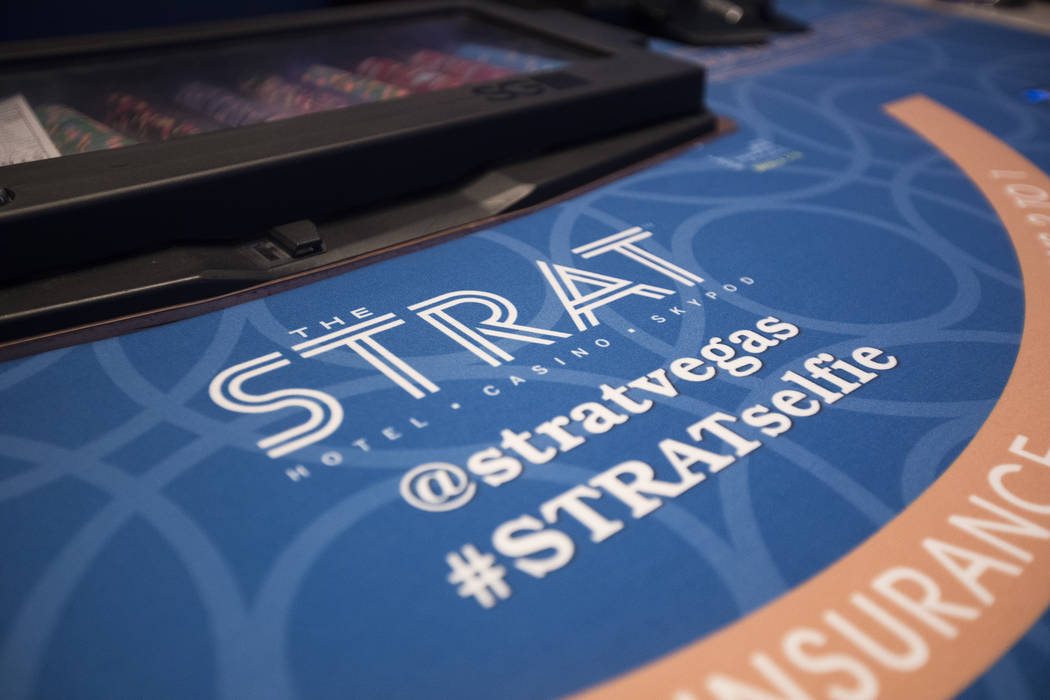 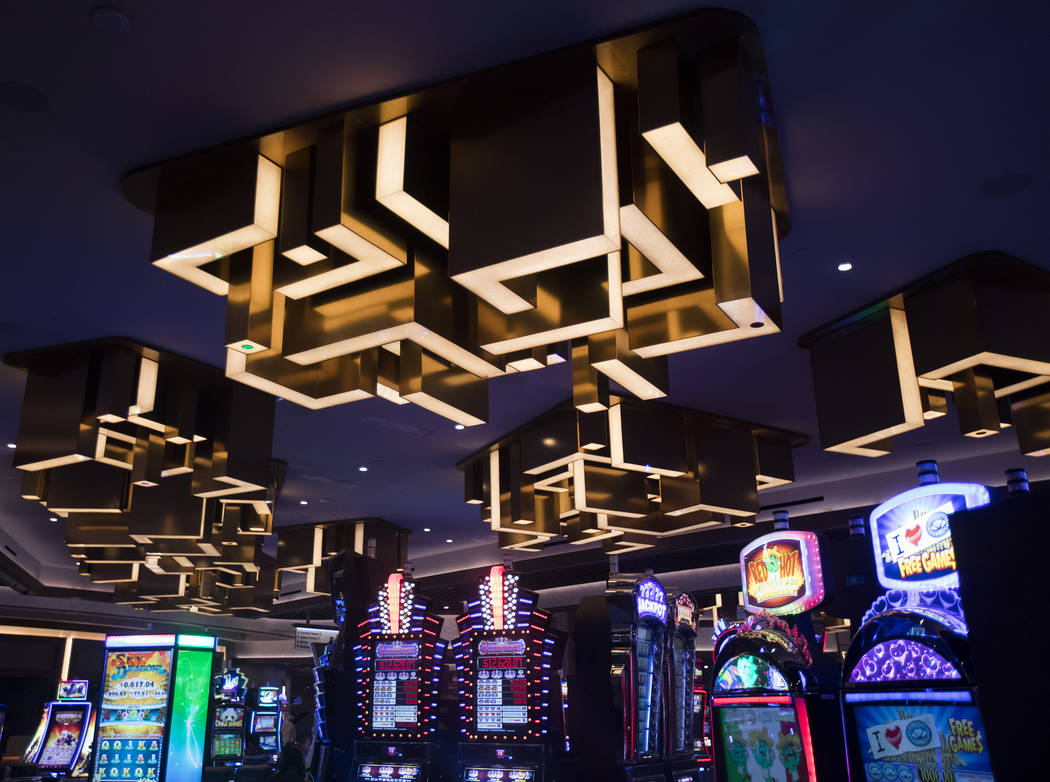 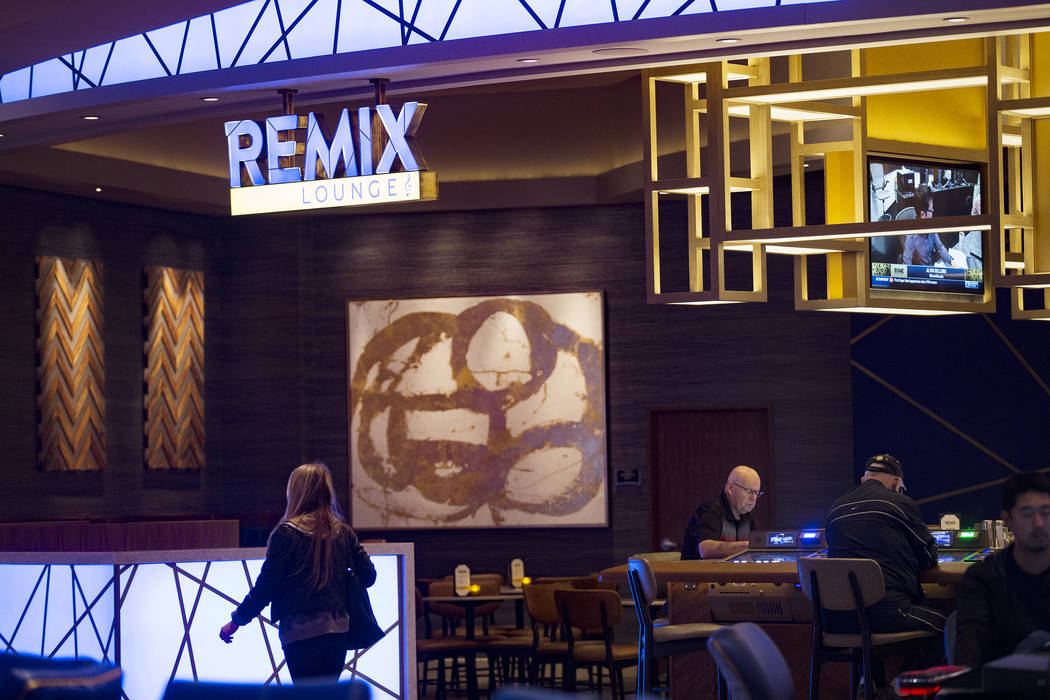 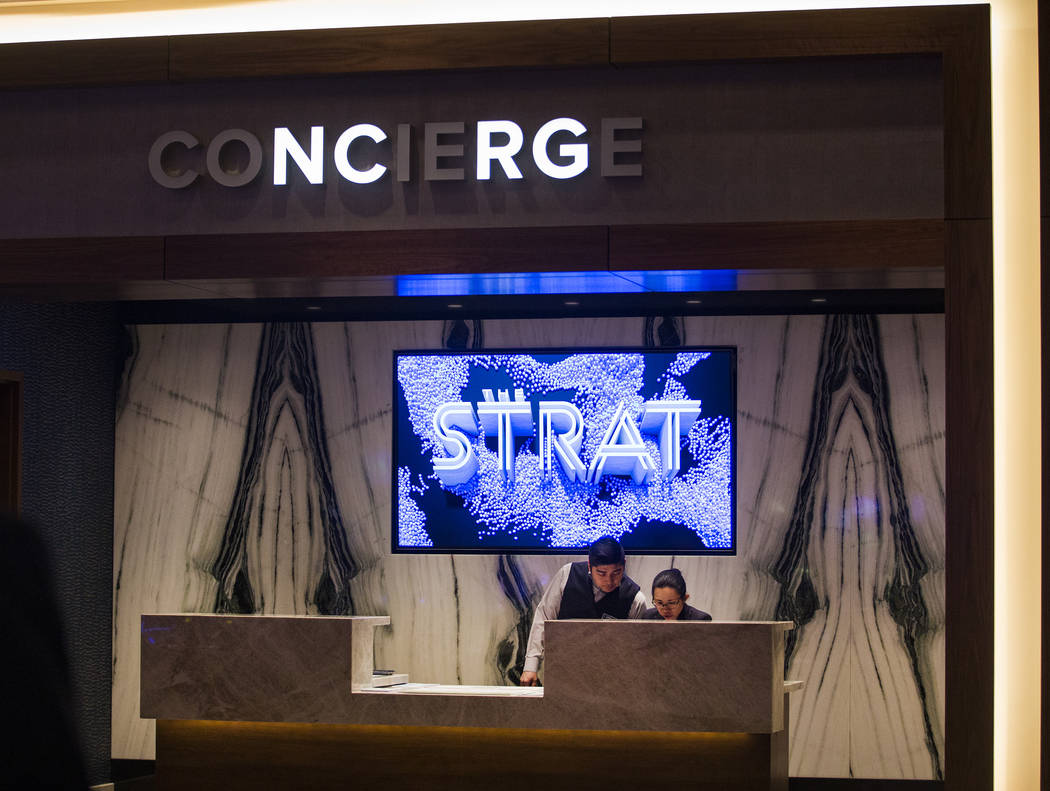 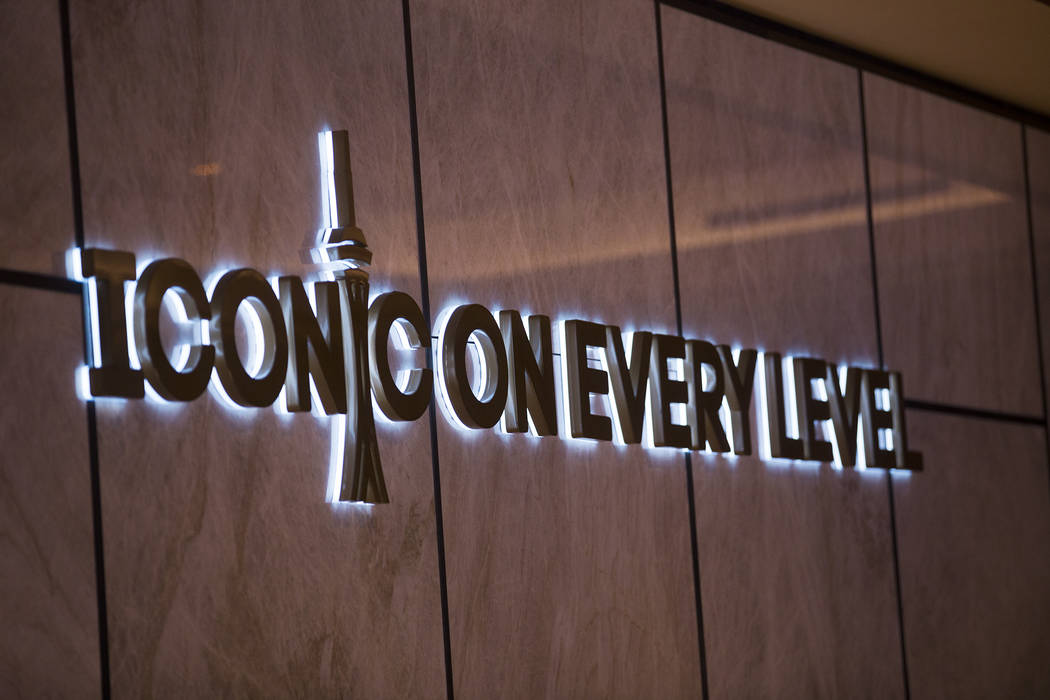 A sign in the lobby at the Strat in Las Vegas, Monday, Jan. 20, 2020. The Strat recently rebranded itself and underwent massive renovations. (Rachel Aston/Las Vegas Review-Journal) @rookie__rae 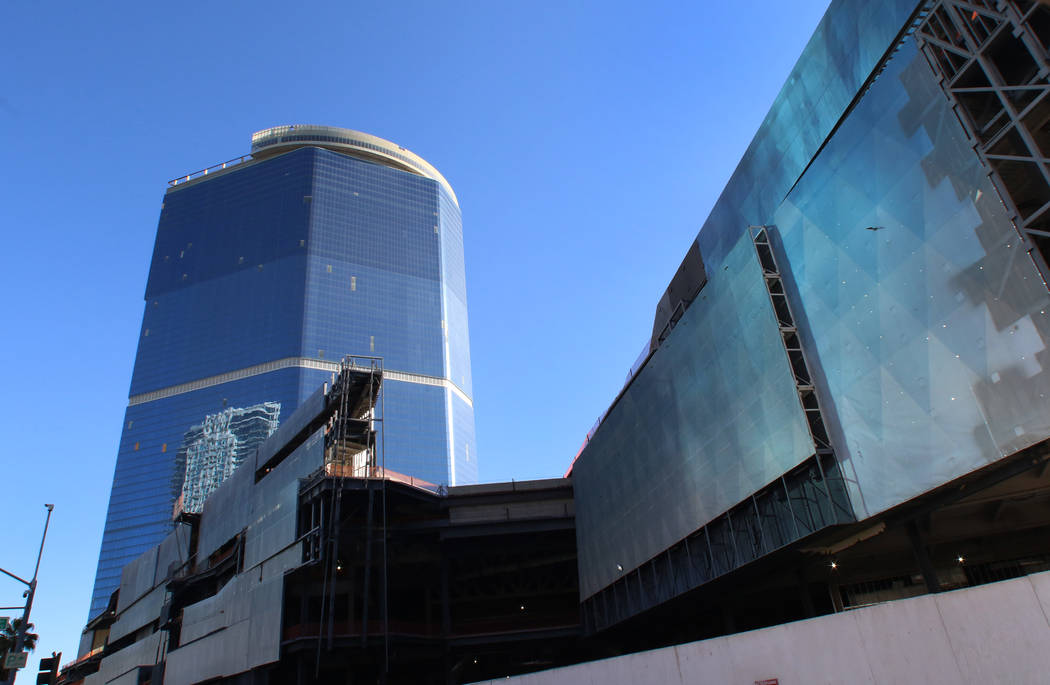 After spending more than a year and $100 million upgrading its restaurants, guest rooms, casino and more, The Strat is nearing the end of its renovation project.

According to company representatives, the renovations should help the property stay competitive on the north end of the Strip by persuading guests to stay longer and explore The Strat’s new offerings.

The investments “were aimed to really offer a full-resort experience that can’t be replicated elsewhere,” said Blake Sartini, CEO of Golden Entertainment, which owns The Strat. The resort plans to host a ribbon-cutting ceremony Wednesday afternoon to mark its remodel.

One of the biggest undertakings was the full remodel of its 80,000-square-foot casino, which has a new color scheme and open layout.

“(The casino) was dark and had just a different feeling before,” said Stephen Thayer, vice president and general manager of The Strat. “Now, to see some natural lighting and the blues, the golds and the different color spectrum — it really is exciting.”

Food and drink options have been expanded, with an observation deck now includes the cocktail bar 108 Drinks and an updated Top of the World restaurant featuring a new menu, carpet and furniture.

Outside sits a 30,000-square-foot tent that houses The Strat’s new acrobatic show, “Celestia.” New signage and screens remind guests that the property, formerly known as the Stratosphere, goes by a new name.

“I think that a lot of people were calling it The Strat anyway, so (changing it) just made sense,” Thayer said. “We wanted a connection with ‘the Stratosphere,’ but we wanted people to know it wasn’t the old Stratosphere.”

Thayer said the modernization efforts are meant to keep guests on the site much longer.

Instead of just visiting the Top of the World restaurant or taking a spin on a thrill ride and then leaving, the property is hoping guests stick around to spend a few bucks at the remodeled casino or watch a game on the 110-foot LED screen at the new William Hill Sports Book.

“The nongaming piece, that’s what people know The Strat for,” Thayer said. “Now, we want to show people the rest of it.”

Union Gaming analyst John DeCree said he is optimistic these renovations will persuade guests to stick around.

“The floor is more lively, the sportsbook and (BLVD & MAIN Taphouse) activate the area adjacent to the casino floor, and the relocation of Starbucks has already had pretty good success,” he said. “The building is being transformed into more than just a dormitory.”

Brent Pirosch, director of gaming consulting at CBRE’s Global Gaming Group, said the renovations “should help immensely,” especially as Strip properties are always fighting get people to walk in from the Strip.

“The management team at The Strat clearly understands this dynamic,” he said. “The renovations should give folks a new reason to visit the property while also giving their repeat guests something new to see.”

The Strat isn’t the only building undergoing some major construction on the north end of the Strip.

One mile south is the construction site for Resorts World, a megaresort set to open in 2021. Nearby is the future site of Drew Las Vegas, set to open in 2022. Then there are the Sahara Las Vegas, which started a multimillion-dollar renovation project in 2018, and Circus Circus, which was bought by Phil Ruffin late last year and is set to undergo major renovations.

“We’re modernizing (The Strat) to make sure it’s in a competitive position moving forward as Las Vegas continues to grow,” Sartini said.

DeCree said the casino, room and food and beverage improvements will “definitely help (The Strat) stay competitive” even if its target customer is different than those at some of its upcoming multibillion-dollar neighbors.

“We think the property could skew toward a slightly younger demographic,” he said. “But we ultimately think the renovations are aimed at maximizing the value of its existing customer base coming from the (online travel agency) channels or for group and conventions around town.”

Some local artwork is showcased in the property, from the “LOOK!” sculpture stationed outside the main entrance, created by a team of three local artists, to the “Ebb and Flow” by Manny Avila and the Blue Tree Group stationed on the main casino floor.

Thayer said the art serves as a reminder that The Strat still is a part of the community, even if the majority of its customers are tourists.

“This was just such a neat community and area around here,” he said. “We wanted to make those tie-in as well, so it wasn’t just a building in here. It’s part of the community.”

The property’s new True Rewards system also will hammer in that message. The players club is available at more than 130 locations across Nevada and Maryland, many of which are in Southern Nevada.

“I think it puts us on a level playing field with other resorts on the Las Vegas Strip corridor in regards to what those guests are offered,” Sartini said.

While The Strat’s remodel celebration takes place this week, it still has a few final steps before the renovations are complete.

A self-check-in area is set to be finished in about two weeks, and renovations in the north side of the casino are set to start in the second quarter. While the property has remodeled nearly half of its 2,472 rooms, more renovations will follow, according to Thayer.

Once the remodeling at The Strat wraps up, Sartini said Golden Entertainment plans to focus on fine-tuning each of its facilities from a marketing standpoint and focus on things like its service culture.

“(That’s the) foundation of everything we do,” he said. “We’re energizing our efforts for a personalized approach.”