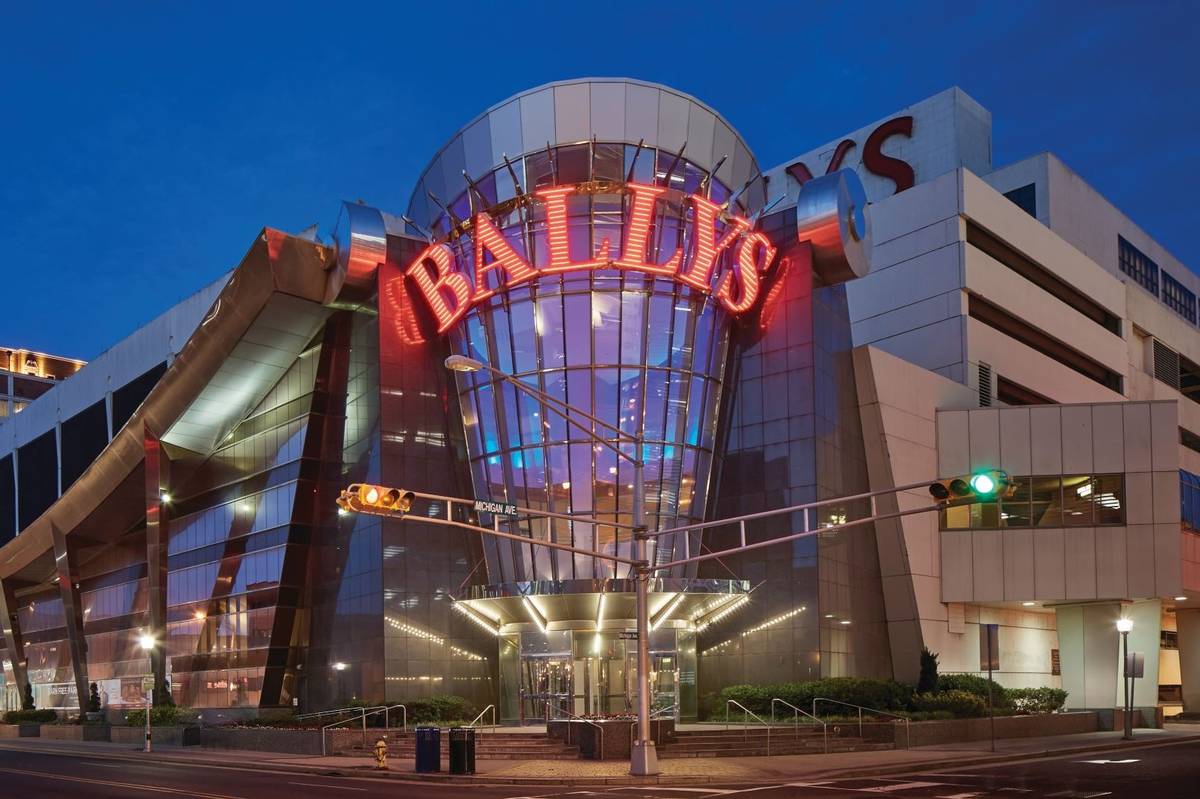 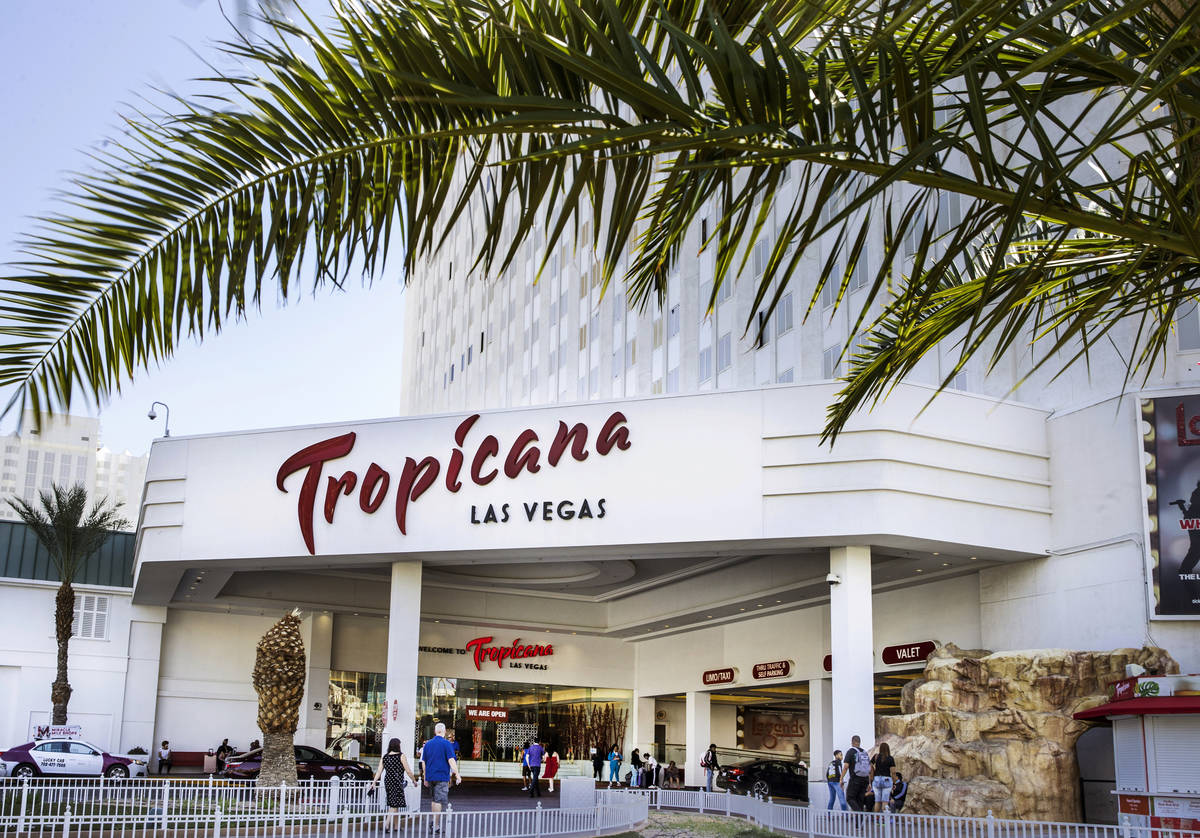 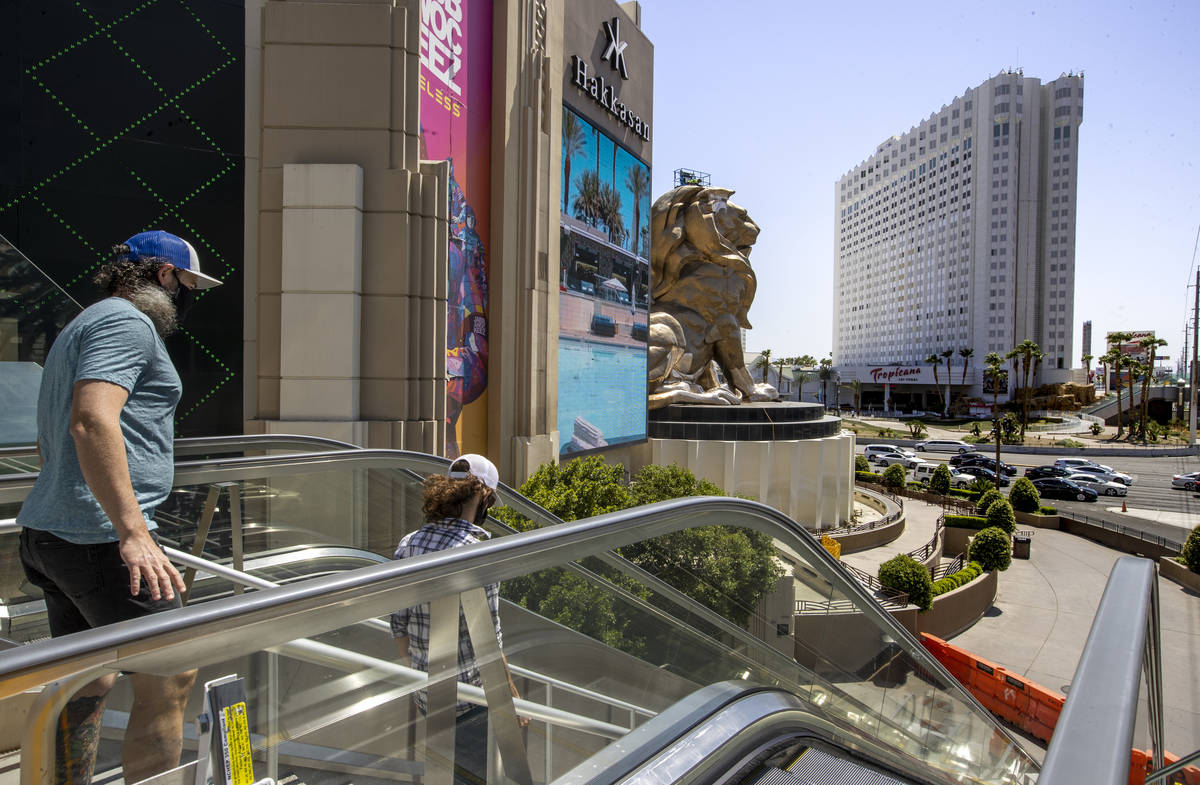 Pedestrians walk down stairs outside the MGM Grand across from the Tropicana on the Las Vegas Strip. Rhode Island-based Bally's Corp. has agreed to purchase it from Gaming and Leisure Properties Inc. L.E. Baskow/Las Vegas Review-Journal) @Left_Eye_Images 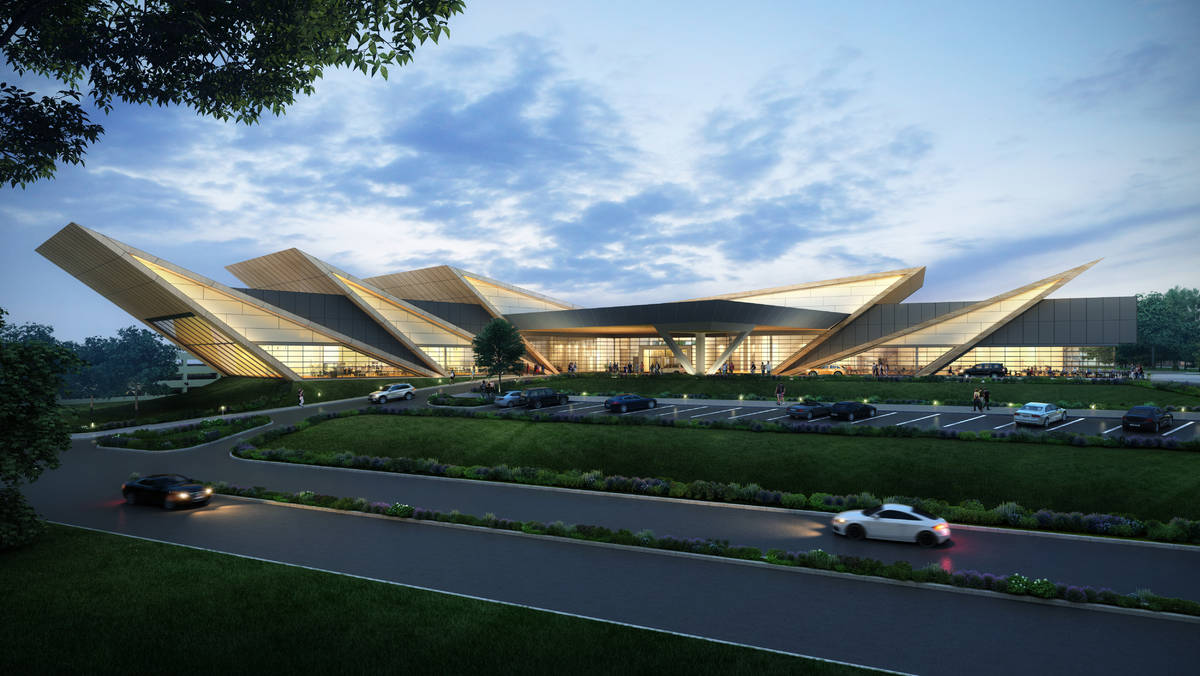 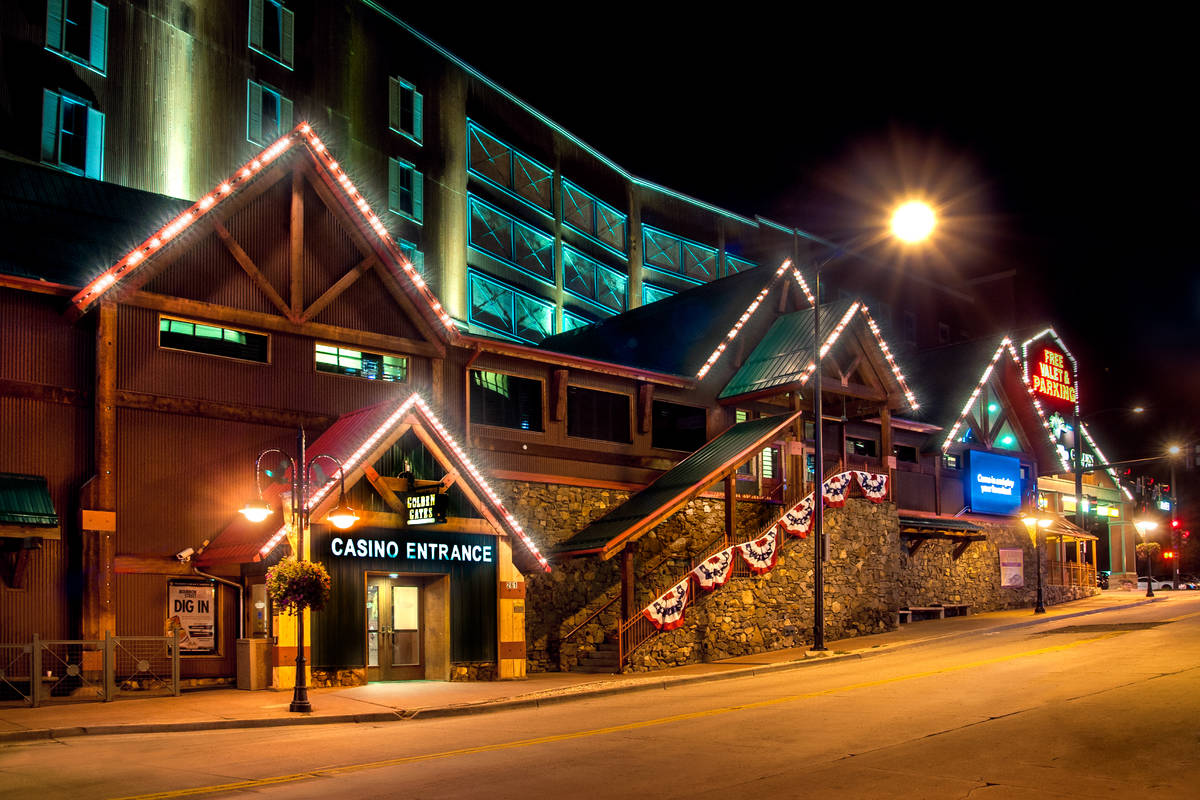 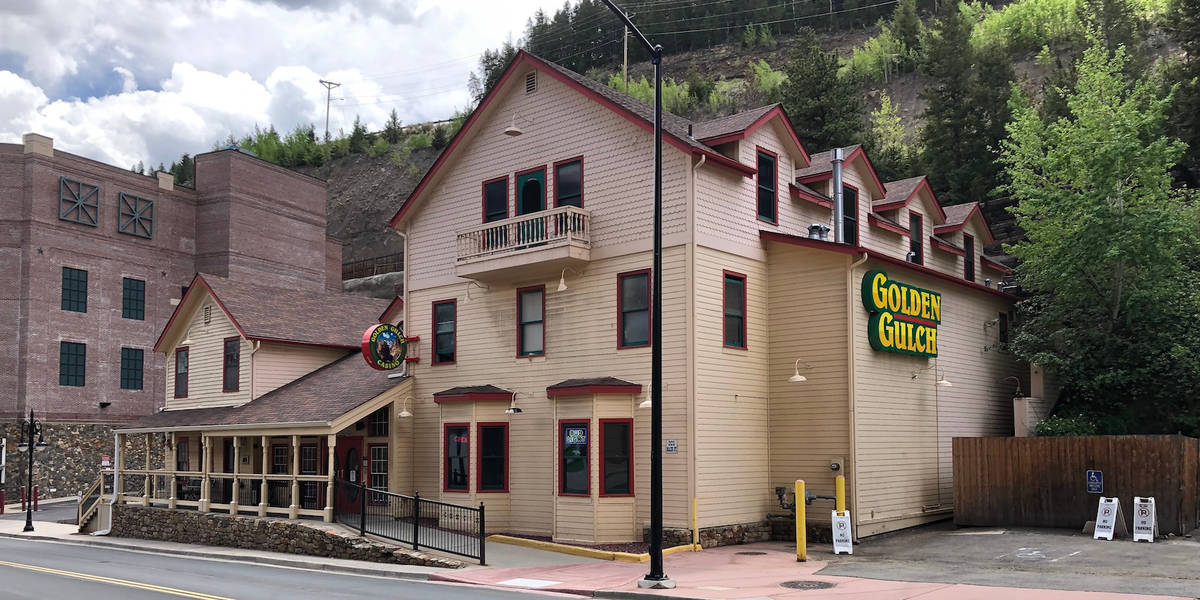 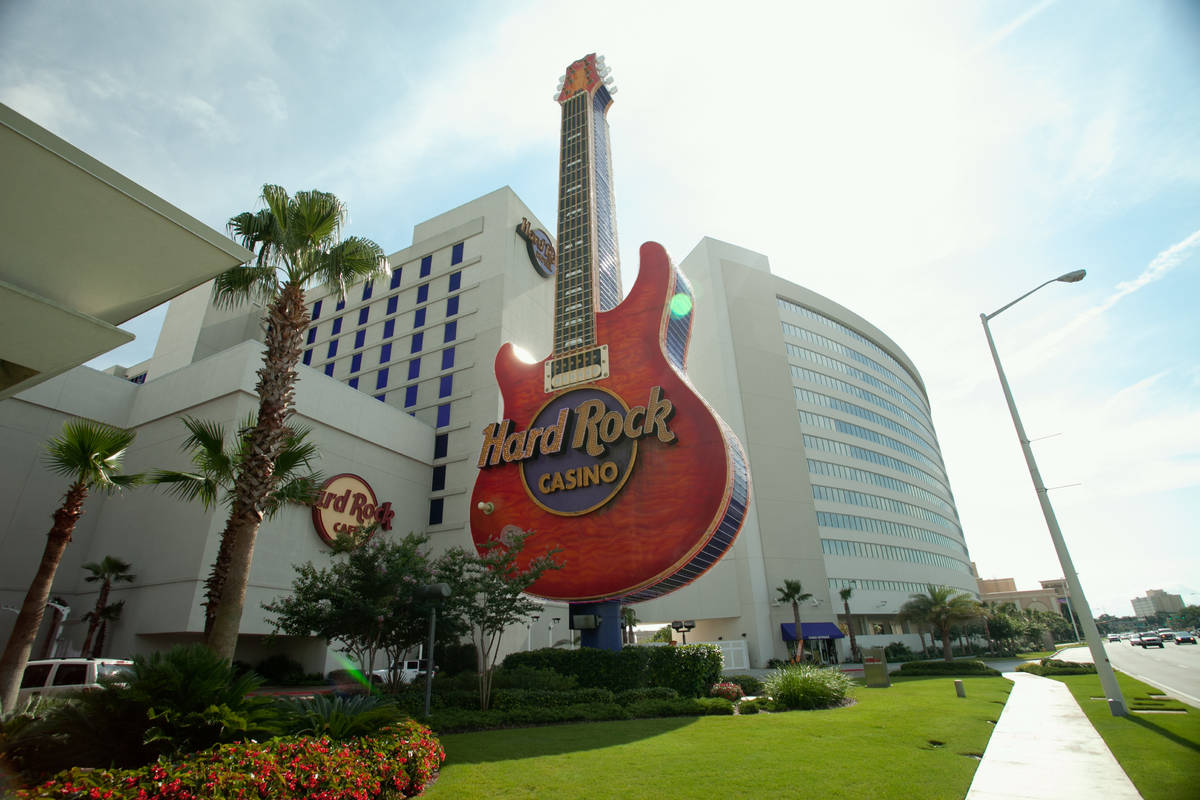 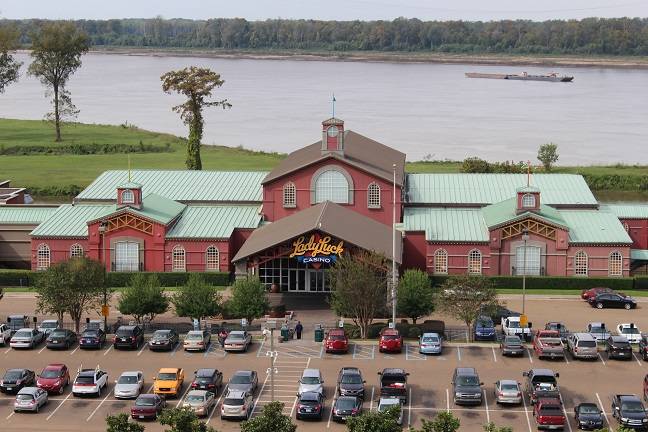 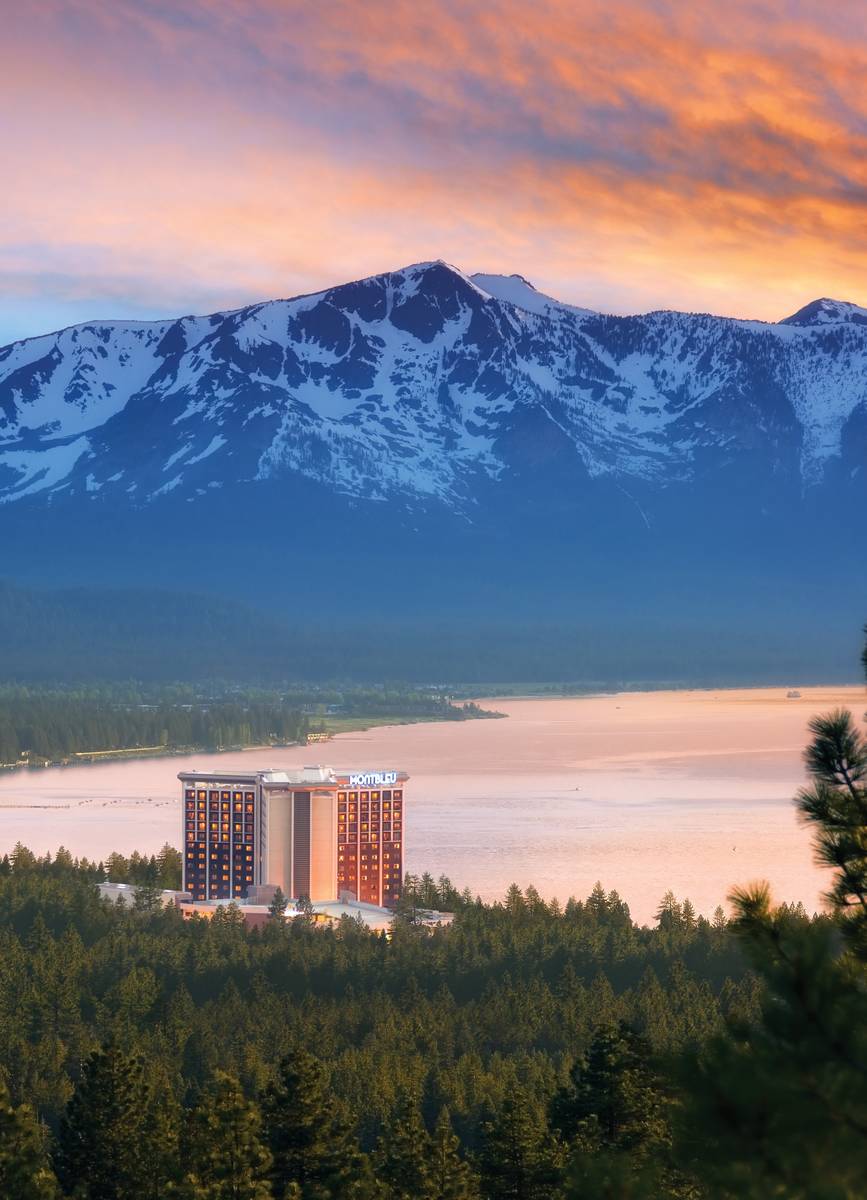 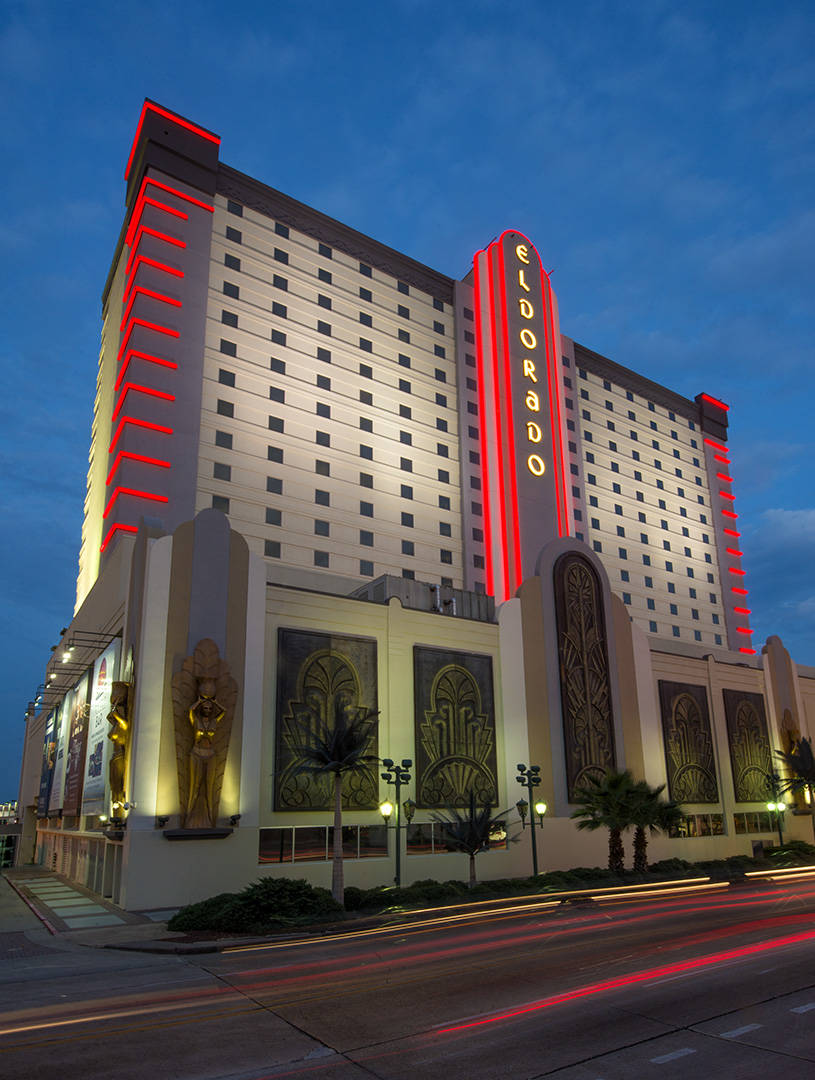 The exterior of the Eldorado Resort Casino Shreveport in Louisiana. (Courtesy, Bally's Corp.) 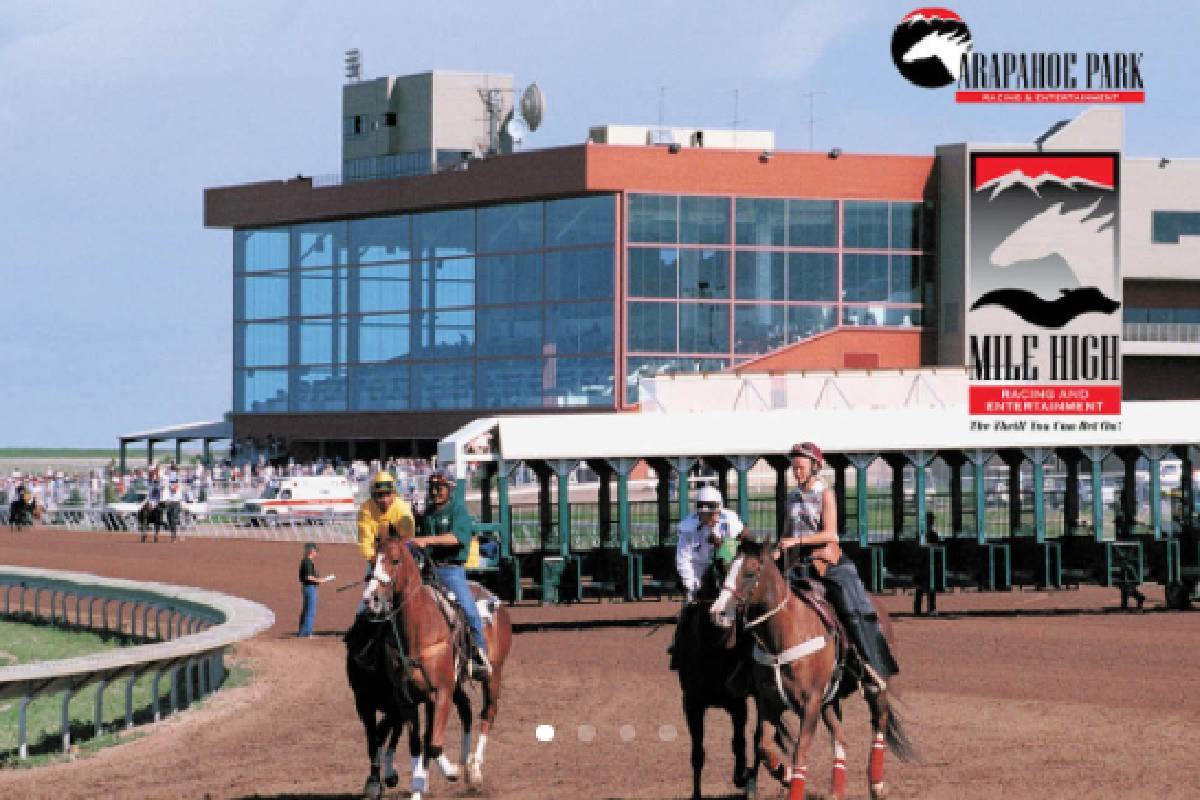 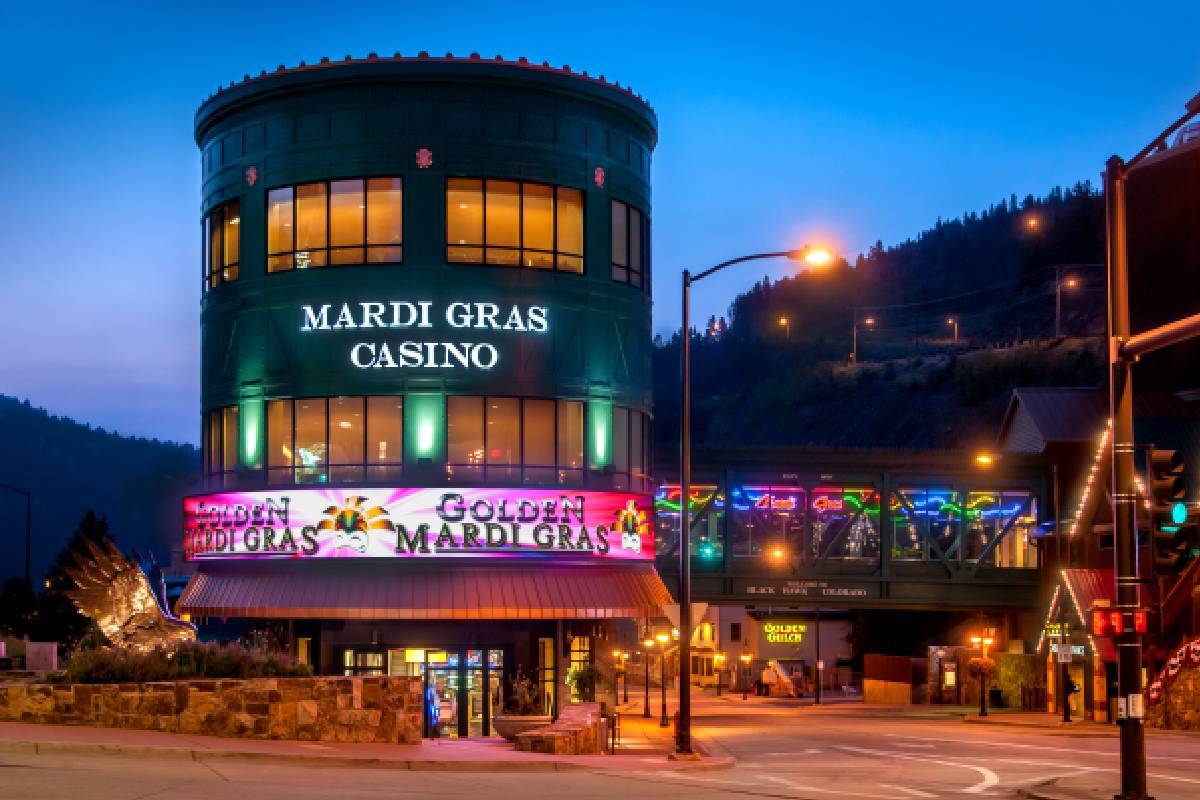 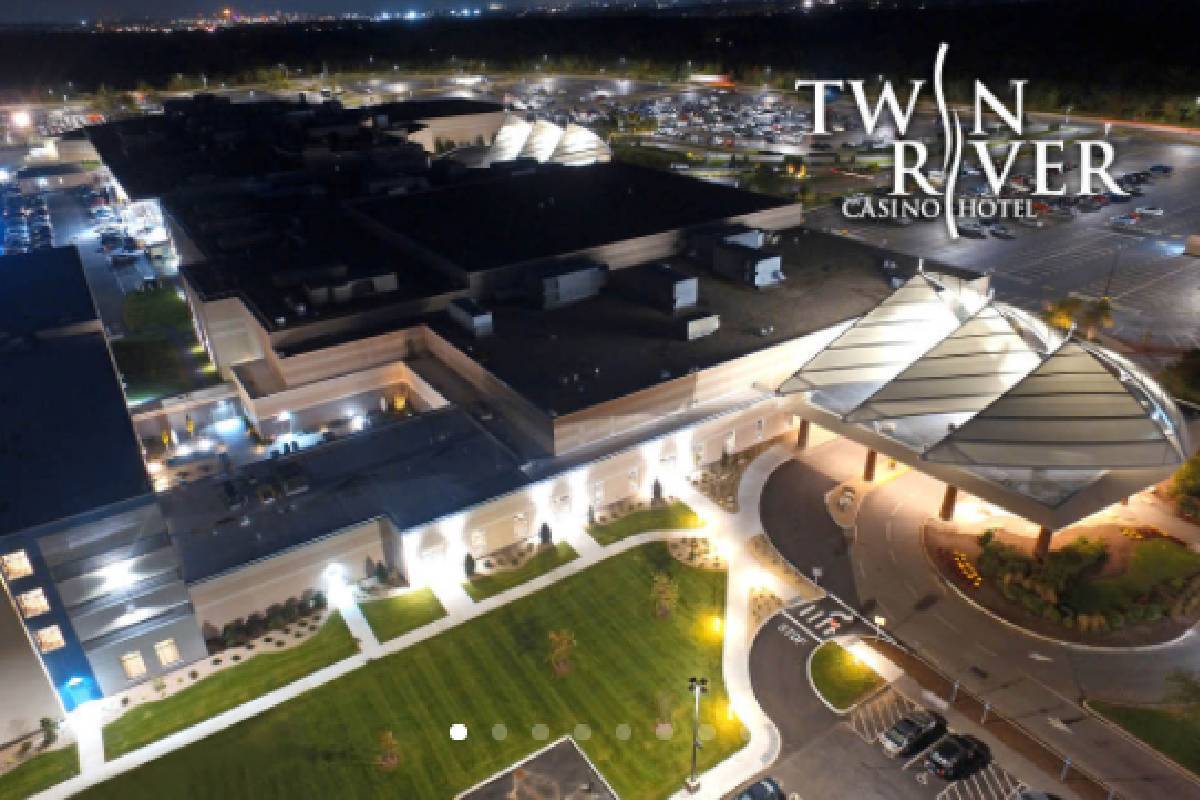 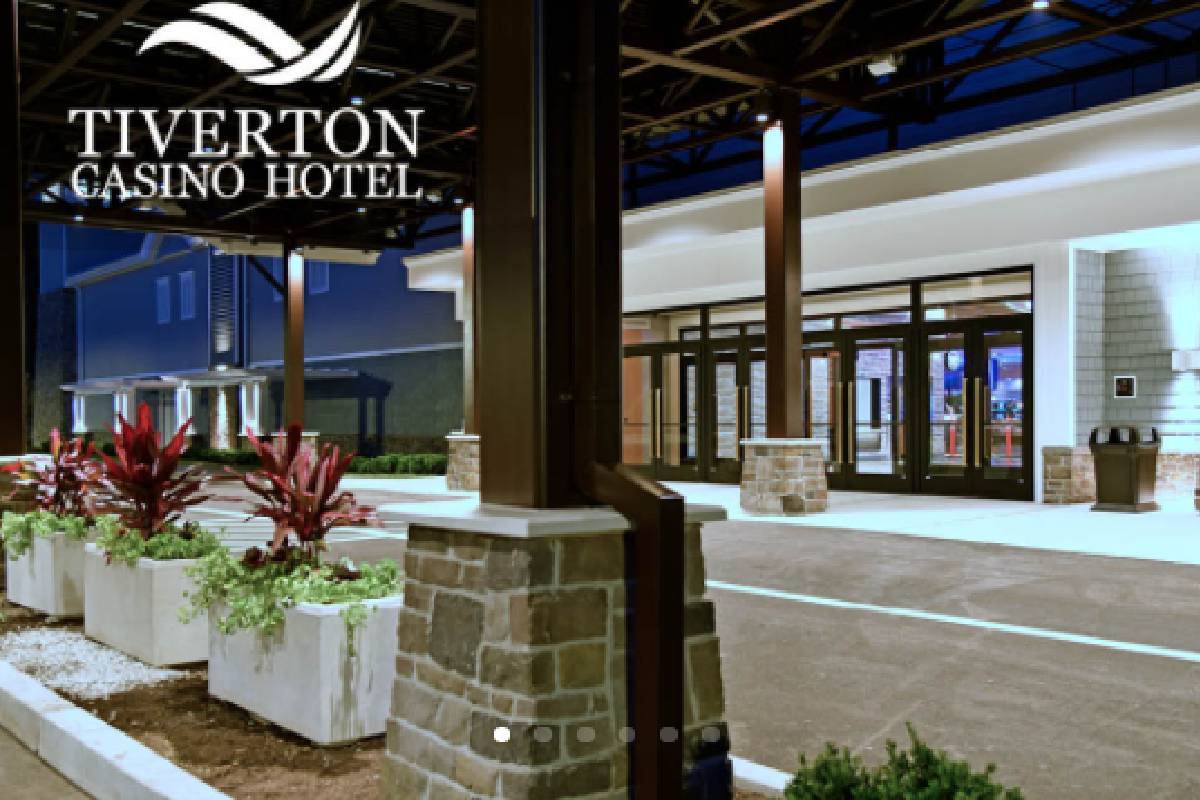 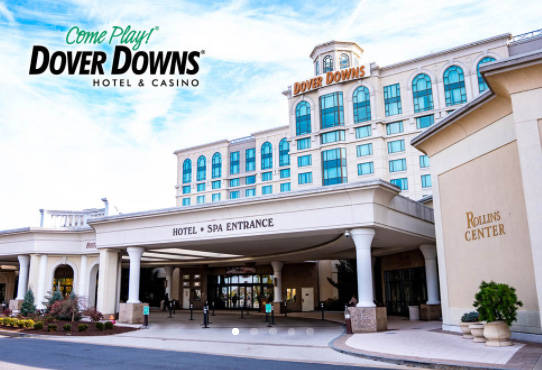 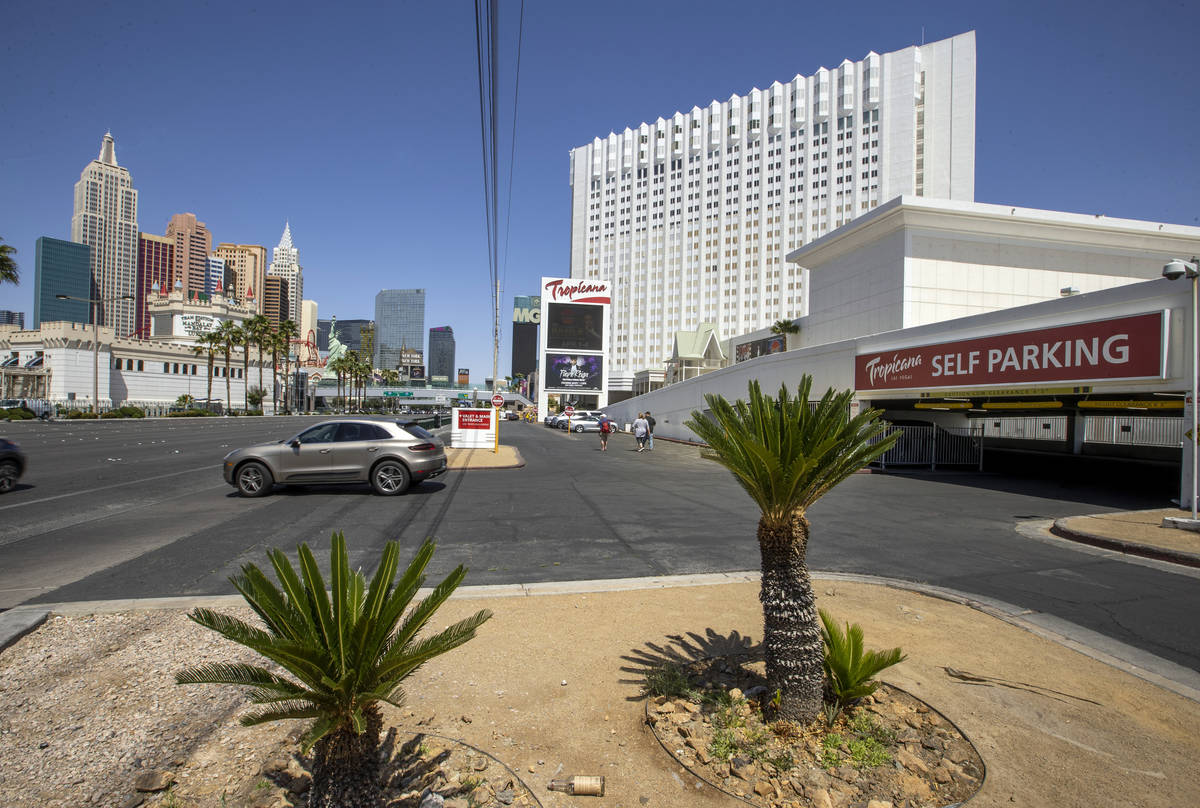 From slot machines and fitness clubs to record labels and hotel-casinos, the Bally brand has been through many iterations over its nearly 90-year history.

The name was first tied to pinball machine manufacturer — and eventual slot machine maker — Bally Manufacturing Corp. in the 1930s and has since been attached to a diverse mix of industries through spinoffs and subsidiaries. Today, the brand is controlled by one of the fastest-growing casino and online gaming operators in the country: Bally’s Corp.

The Rhode Island-based company has been aggressively purchasing properties and online gaming companies in recent months to bring its omnichannel vision to life. This year alone, it has finalized or agreed to merger and acquisition deals with three companies and two casinos, including the Tropicana in Las Vegas.

According to President and CEO George Papanier, Bally’s Corp. is just getting started.

“We are confident that Bally’s will not only be a national powerhouse in the online sports betting and iGaming industry, but the overall U.S. gaming industry,” he told the Review-Journal. “There is no other operator with such a diverse and expansive portfolio, or with the same momentum in the marketplace that we’ve achieved.”

Before there was Bally’s Corp., there was Twin River Worldwide Holdings Inc.

The company launched in March 2004, and its original portfolio included four greyhound tracks and a horseracing track in Rhode Island and Colorado.

Back then, he said there were “real concerns” about the company.

Wynn Resorts Ltd. was getting ready to launch its Encore Boston Harbor property the summer of 2019, just an hour’s drive from the company’s two Rhode Island casinos.

“At the time, that was really the story. How can they respond to this new competition, this new multibillion-dollar property?” Jonas said. “The stock was languished. There was a bit of an overhang there.”

But Twin River leaders proved that they were up for the challenge.

The company started making “very smart acquisitions at very attractive prices,” Jonas said. Acquisitions are still top of mind for the company: It has 12 casinos in its portfolio across eight states, with four more in the works, including the Tropicana on the Strip, a deal valued at $308 million.

The timing of the pandemic and Eldorado Resort Inc.’s acquisition of Caesars Entertainment Corp. last year was fortuitous for the growth of Bally’s.

The two Nevada-based companies shed several properties to be Federal Trade Commission-compliant ahead of their $17.3 billion merger in July. The companies — now operating as Caesars Entertainment Inc. post-merger — had agreed to sell six properties to Twin River worth a combined $550 million.

“The pool of acquirers was limited. Twin River had a pristine balance sheet and was the only qualified acquirer out there through COVID,” Jonas said. “They turned out to be smart acquisitions.”

Bally’s is still keeping its eyes on potential markets for growth. The company is one of three finalists bidding for a gaming license in Richmond, Virginia, and it could be in play for a downstate New York license, according to Jefferies analyst David Katz.

Bally’s “is currently not present in (Michigan) and (Maryland) but appears to be signaling interest in those markets,” Katz said in a Tuesday note to investors. “As legalization for mobile wagering accelerates across states, (the company’s) interest could extend beyond the four states.”

Online sports betting and iGaming growth has been another major focal point for the company.

In just the past four months, the company has initiated or closed the acquisitions of daily fantasy sports platform Monkey Knife Fight, free-to-play platform SportCaller and online sports betting operator Bet.Works’ technology platform. On Tuesday, the company announced that it had agreed to acquire United Kingdom-based online gaming provider Gamesys Group plc in a deal worth $2.8 billion.

Shares of the company have gone up 92 percent since its partnership with Sinclair was announced.

The growth “is really unbelievable,” said Marcus Prater, executive director of the Association of Gaming Equipment Manufacturers and a former marketing director for Bally Technologies, a spinoff of the original Bally Manufacturing Corp.

“I wouldn’t have given this Twin Rivers operation a second thought a couple years ago — and now look at what they’ve done just in the past six months,” he added.

Papanier said the company’s focus on operating with little leverage and high liquidity has allowed it to snatch up a large number of assets in a relatively short amount of time.

“We have always been opportunistic, yet disciplined, in our (merger and acquisition) strategy,” he said.

The power behind the name

Bally’s has had an audacious approach to growth, but its most significant acquisition was one that didn’t come with any slot machines, sports betting licenses or land — just the Bally’s name.

It also gave it a “single, prominent brand” under which its physical and online offerings could unite, according to its latest annual report.

The name, which used to be attached to the world’s largest slot machine manufacturing company, is going through a renaissance under its new owner.

Just turn on a sports broadcast; there’s a good chance now that you will catch the Bally’s brand through the company’s recent rebranding deal with Sinclair.

“It’s almost like somebody flipped on a switch, and the Bally’s ‘B’ is everywhere now,” Prater said. “It’s now truly in the major leagues. … This is a remarkable extension of what is coming up on a 90 year old brand.”

The brand’s reach should only grow from here on, now that Bally’s is gearing up to launch its Bally Bet sports app.

“I think the vision is, we will be bombarded with Bally’s as consumers and really associate that name with sports betting as well as just general consumption of sports,” Jonas said.

Charlie Lombardo, a gaming consultant and a former head of slot operations at Bally’s Las Vegas, said the name is instantly recognizable for many — especially along the East Coast, home of Bally’s Atlantic City.

“The name was always strong,” he said. “I think (the recent purchase by the former Twin River) is nothing but upside for the brand.”

Papanier told the Review-Journal that the brand name has “definitely been an integral component” to the company’s success.

It’s “associated with first-in-class properties and amenities, so it aligns perfectly with our platform,” he said. “Moreover, the brand is proving to be extremely important to our growth and diversification strategy.”

It has yet to be seen just how far Bally’s brand will reach across the gaming space. At this point, the company’s growth strategy has no end in sight.

“We are always on the hunt for attractive assets that complement our diverse and expanding portfolio,” Papanier said. “Our goal is to become the premier, truly integrated, U.S. omnichannel gaming company with a (business to business to consumer) business model. … The possibilities are endless.”

Bally shares closed up 1.7 percent Friday to $58.78 on the New York Stock Exchange.