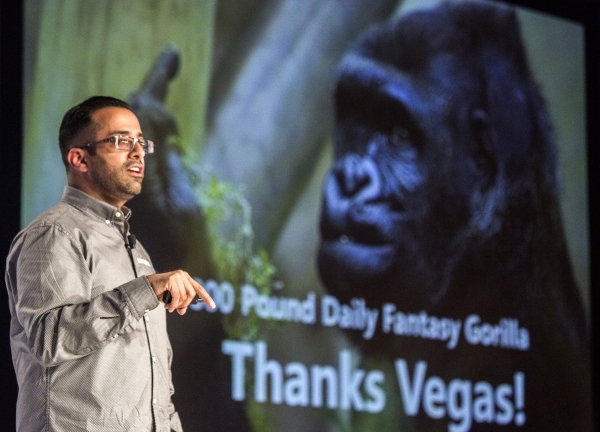 Rahul Sood,Co-Founder and CEO of Unikrn, speaks about the future of eSports during his keynote speech at Global Gaming Expo in the Sands Expo and Convention Center on Thursday, Oct. 1,2015. Jeff Scheid/ Las Vegas Review-Journal Follow @jlscheid

Rahul Sood admitted at the outset of his Thursday morning keynote address at the Global Gaming Expo that it had been awhile since he visited Las Vegas.

He also wondered if comments about the traditional casino industry might cause him to end up “in a six-foot hole in desert.”

Sood, 42, CEO and co-founder of Unikrn, a Seattle-based video gaming and entertainment company focused on eSports, doesn’t believe the traditional slot machine manufacturers are addressing the interests of the casino customers.

“What was going through the mind of person who designed the Britney Spears slot machine?” Sood said after watching an older customer play the game inside a Strip casino. “It was built like a nightclub. It was a strange approach.”

Sood also questions if some the proposed skill-based slot machines being designed to attract a younger demographic will actually succeed.

“You earn free spins for shooting something. What’s up with that?” Sood said.

Sood then told a sparse crowd at the Sands Expo and Convention Center that eSports could become $3.3 billion revenue generating business by 2020, according to a report authored by Eilers Research.

That opened a few eyes in the room.

For those unfamiliar with eSports, the events attract thousands of viewers to 20,000-seat sports arenas to watch skilled video game players compete over three days in multiplayer online battle games, such as Dota 2, League of Legends, StarCraft II, Counter Strike and Call of Duty.

Sood said Ivy League colleges are beginning to offer scholarships to the players, whom he described as highly intelligent, quick thinkers and “the type of individuals these schools want to have as students.”

So where does the traditional gaming industry fit into this mix? Casino operators have already reached out to Sood to try and gain an understanding about the eSports phenomena. He foresees a day where casinos could host eSports events, possibly inside one of the Strip arena venues.

Sood said the legalization of sports wagering nationwide would fuel additional growth to the eSports business, which has also caught the attention of ESPN. Just the amount of interest in daily fantasy sports alone, which he termed “an 800-pound gorilla” created by Las Vegas’ “protectionism,” showed Americans want nontraditional ways to gamble.

However, he was critical of the unregulated growth in fantasy sports, calling it “gambling” and criticizing the lack of consumer protections. Sood said his 13-year-old son was able to sign up on DraftKings, one fantasy sports largest companies.

“The traditional casino has an older demographic,” Sood said in an interview after his G2E address. “Younger people are cutting through the casino as fast as they can to get to the nightclubs.”

But Sood said he was impressed by some of the newer slot machines and skill-based games he saw while walking the G2E trade show floor. He just worries that many themes, titles and designs won’t work.

Sood formerly worked for Microsoft and HP before launching Unikrn.

He said casinos could host eSports events on a smaller scale, if wagering were allowed on the competition.

Unikrn, which is not even a year old, serves as “theme park” for eSports and a vehicle for “heightening the experience for people participating or watching eSports.

“You can never have a road map beyond six months with this type of business because it changes quickly,” he said.

Sood said the company currently has 7 million users and has attracted investors such as Mark Cuban, owner of the NBA’s Dallas Mavericks, and actor Ashton Kutcher.

“The real revenue will come when people are able to bet real money on eSports,” Sood said. “Right now, we’re about capturing a large user base.”