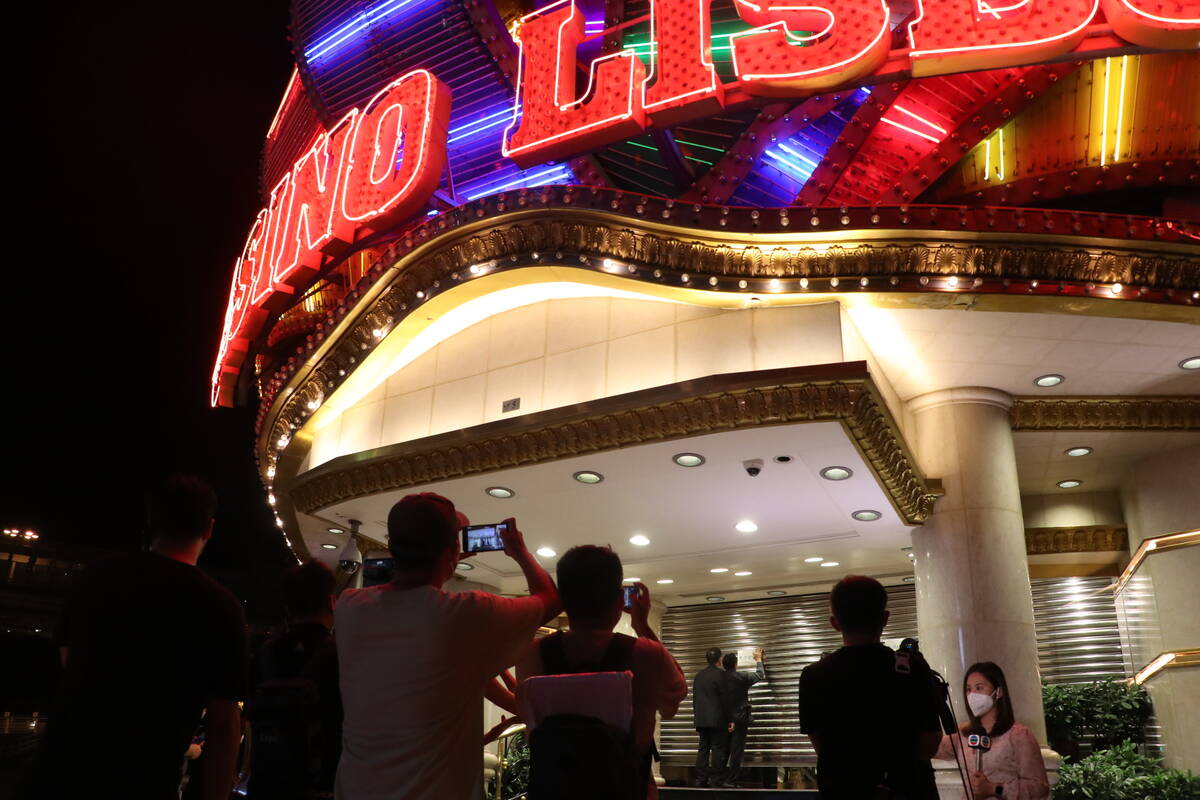 People take photos as security closes the shutters at Casino Lisboaʡt midnight on Monday, July 11, 2022, in Macao. Macao will close all its casinos for a week starting Monday, July 11, and largely restrict people to their homes as it tries to stop a COVID-19 outbreak that has infected more than 1,400 people in the past three weeks. (Inside Asian Gaming) 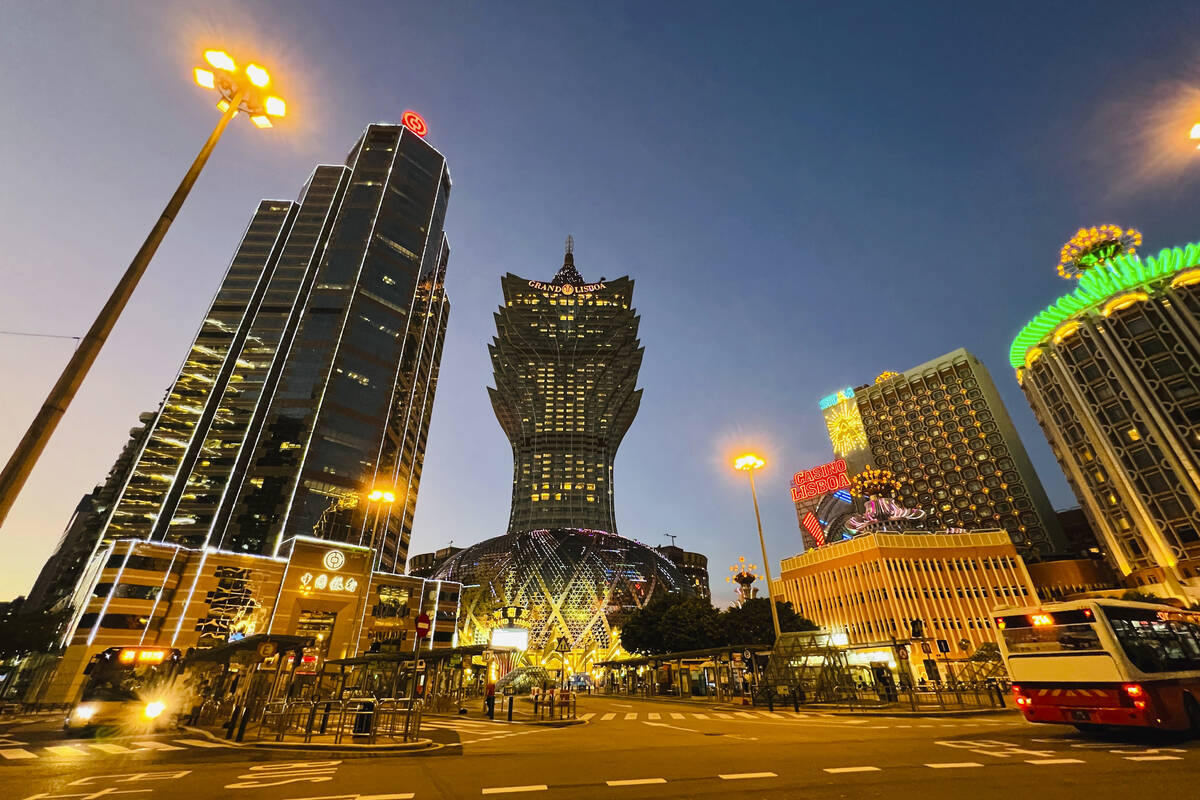 Grand Lisboa, center, is closed in Macao, Monday, July 11, 2022. Streets in the gambling center of Macao were empty Monday after casinos and most other businesses were ordered to close while the Chinese territory near Hong Kong fights a coronavirus outbreak. (AP Photo/Kong)

The good news for Macao’s 41 casinos is that the government has allowed the properties to open their doors again.

The bad news: Not many people are coming through them.

The fact that tourists face a seven-day quarantine before being allowed into the region is one big reason for the lack of visitors, according to a source familiar with the situation but not authorized to speak publicly.

Resorts are still restricted from having more than 50 percent of their workforce in place. Employee dining facilities are off limits and local citizens have been directed not to go out except to get food or for emergencies.

Hong Kong-based Bernstein Research reported average daily travel in and out of Macao was at 563 during the week of July 17-23, according to Asian Gaming Brief. That’s down 97 percent from June’s average and down 20 percent from the prior week.

According to analysts, it could be a long time before steady crowds of people are jamming the tables as they did prior to the COVID-19 pandemic.

A 12-day casino closure order from the government of Macao ended just after midnight Saturday in the only place in China where gambling is legal.

Representatives of Las Vegas Sands Corp. and Wynn Resorts Ltd. confirmed Sunday and MGM Resorts International on Monday that their properties — six for Sands, three for Wynn and two for MGM — were open.

Analysts say they expect it to be months before meaningful visitation occurs in Macao and that a recovery from the COVID slowdown involving casino shutdowns, border closures and other restrictions may not occur until next year.

Asked Monday how they felt about gaming analysts’ short-term forecast for Macao, none of the companies’ representatives commented.

Three analysts covering the three Las Vegas companies forecast tough times on the horizon in Macao even before the doors reopened Saturday.

Las Vegas-based John DeCree of CBRE Equity Research said in a report to investors prior to the casinos’ reopening that the central government of China’s zero-COVID policy coupled with a series of new COVID outbreaks not only have prevented recovery but made the tourism outlook in Macao worse. But he said Sands properties have the resources to endure minimal revenue for nearly a year.

“Fortunately, Sands China Ltd. (the Chinese operating subsidiary of Sands) and Las Vegas Sands are flush with liquidity, and we estimate 327 days of liquidity in a near-zero revenue environment.”

Carlo Santarelli, an analyst with Deutsche Bank, told investors in a report that visitation was down 84 percent compared with the second quarter of 2019 and mass gaming revenue was down 83 percent from that quarter and that was before the government required casinos to close.

Santarelli noted that Sands China has taken a $1 billion loan from Sands and has $1.78 billion in cash on hand and $1.04 billion in credit capacity. The company continues to pay its employees but isn’t up to full worker capacity because the visitation level doesn’t require it and the government continues to limit employment levels.

All three analysts have encouraged investors to hold onto their stock because a rebound in Macao, probably in 2023 or beyond, should be robust. That’s what Sands officials reiterated in their second-quarter earnings conference call Wednesday.

“Results in Singapore reflect the recent (April) introduction of the Vaccinated Travel Framework there as well as that city-state’s set of initiatives to advance its strategy of ‘Living with COVID,’ such as eliminating capacity limits at its nightlife establishments on June 14,” he wrote.

“Our sense is that when we point this out to investors, they are surprised it is that high and the general perception is that Macao is the majority of the current equity value (as it was in the past when Macao was in its strong performing periods, pre-pandemic),” he said.

Singapore is getting another boost next month when G2E Asia, the Asian version of the American Gaming Association’s Global Gaming Expo, is moving to Singapore and will be held at the Marina Bay Sands Aug. 24-26.

In another Singapore development, Asian media reported the Genting Group, operators of Resorts World Las Vegas and Resorts World Sentosa off the coast of Singapore, rejected a bid from MGM to acquire the Singapore resort property. MGM representatives had no comment. 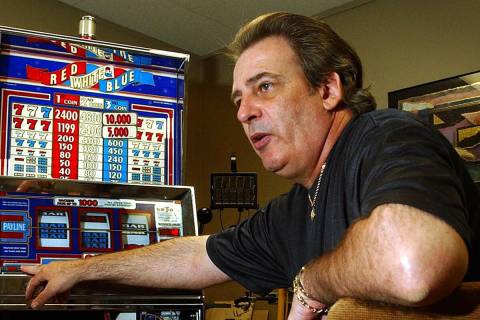