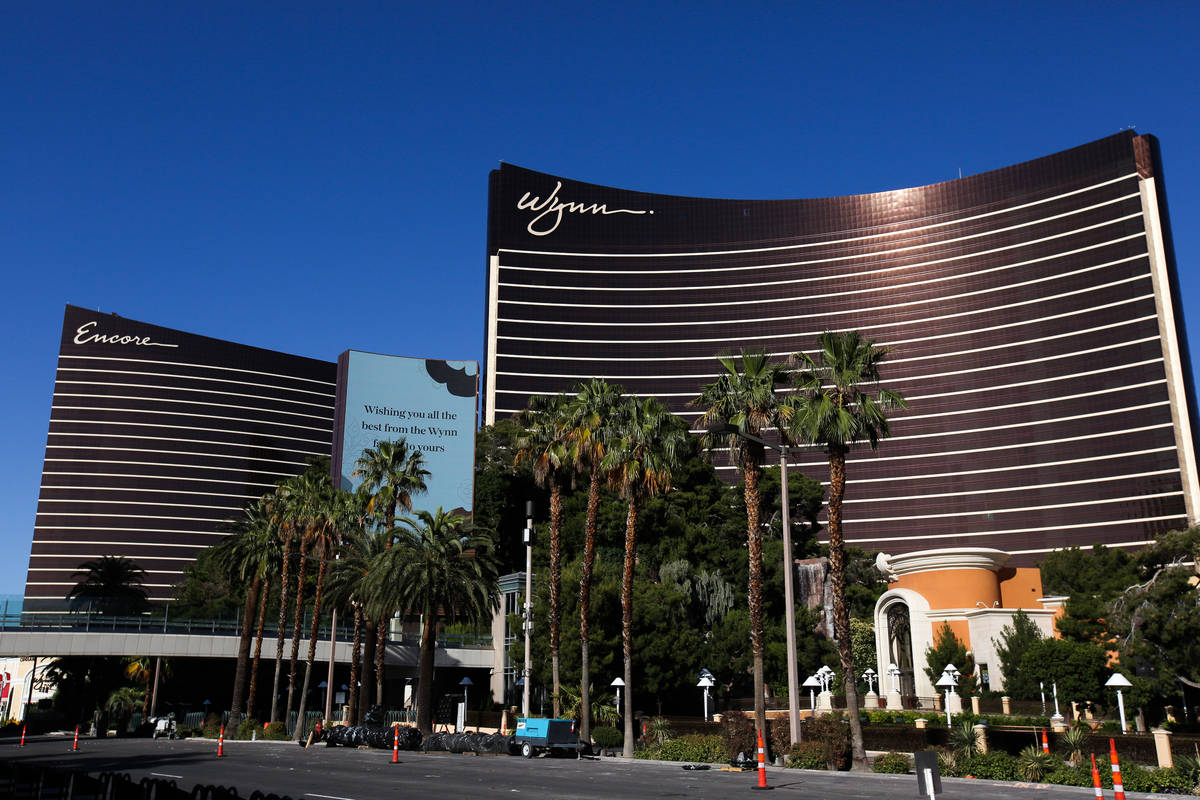 Encore and Wynn are seen on the Strip on Tuesday, May 26, 2020, in Las Vegas. (Chris Day/Las Vegas Review-Journal) 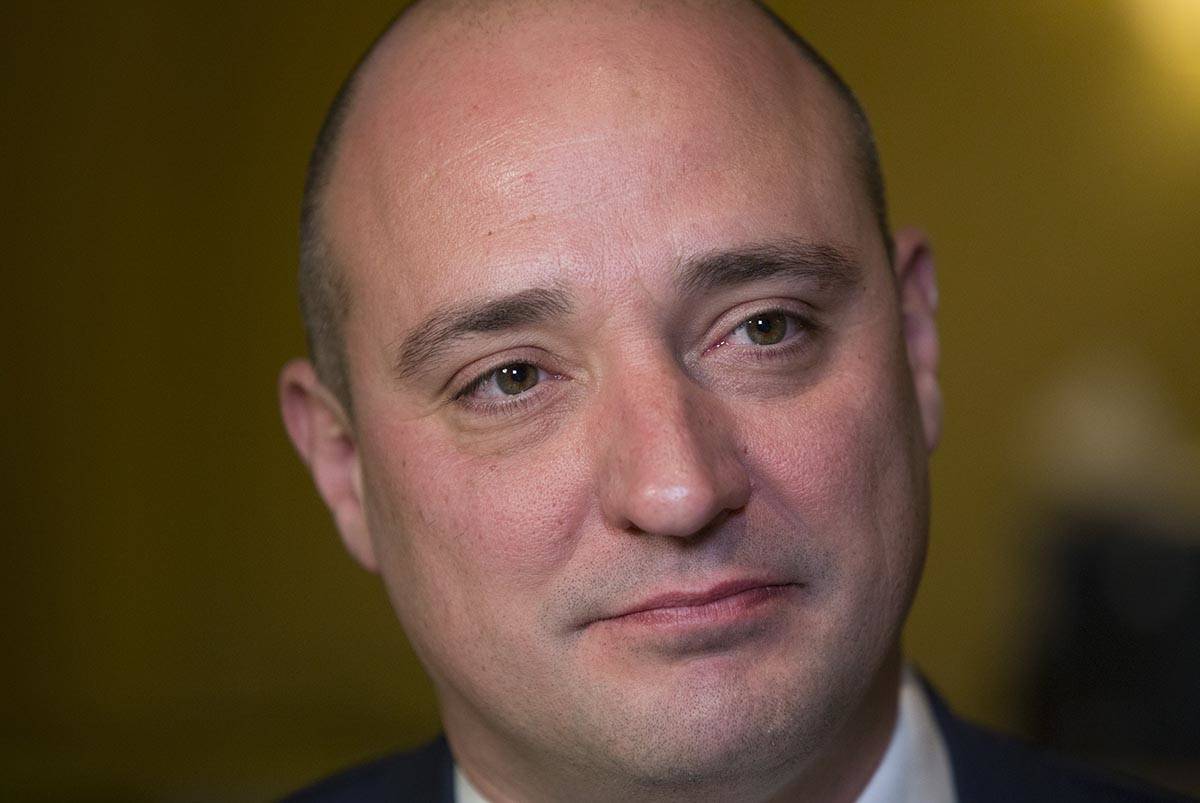 Wynn Resort Ltd.’s top executive harked back to F. Scott Fitzgerald, “The Great Gatsby” and the Roaring ’20s to describe how he thinks Las Vegas is going to rebound once the coronavirus pandemic subsides.

Wynn CEO Matt Maddox, in an interview with Latin Chamber of Commerce President Peter Guzman as part of the chamber’s symposium series, said that he’s still concerned about the possibility of another shutdown in Las Vegas and that he had a head start to prepare for the severity of the pandemic because of his experiences in Macao.

“Las Vegas itself, because of our heavy reliance on conventions, is going to have a slow comeback,” Maddox said. “But on the flip side, I think we’re smart enough and we’re doing it to attract more leisure customers coming to have fun because I think people are really going to want to get out and have a good time.”

“Casinos are great and that’s what’s carrying us right now,” he said. “It’s built around shows, entertainment and conventions and nightclubs and people coming together to have fun.

“What I’ve learned about our experience in China, since they’re now moving in China and the nightlife is back, people got really sick and tired of wearing their sweats and pajamas every day. Once they got out and got that taste of being around other people, it’s like electric.”

“We’ve got to get shows back again,” he said. “We’ve got to get conventions back again. And I think people are going to want to dress up and go out and be around other people once they feel safe. It’s going to be similar to the Roaring ’20s after the pandemic of 1918 and 1919. You went into ‘The Great Gatsby.’ It’s like, ‘Oh, my God, we survived this. Let’s have fun.’”

Maddox said with the arrival of the National Football League and the Las Vegas Raiders and venues ready to host concerts and special events, the city is well prepared for the long haul.

“I think we can make up, not for all of it but a lot of that business, and I think Las Vegas can establish itself as sort of that place to go again, quickly, to let loose,” he said.

“What I tell you today is when we get into a post-COVID world, the pent-up demand you’re going to see for gaming in general and Las Vegas in particular is going to be beyond your wildest dreams,” Reeg told investors in the company’s Nov. 5 call.

“The flow-through that you’re going to see in the sector is unlike anything that has happened,” he said.

Maddox said investors are not happy that Wynn has spent so much on reacting to the pandemic.

“We were the first to shut down in Las Vegas,” Maddox said. “We did it before the mandate because it was the right thing to do. It was impossible to stay open. Because we kept all 30,000 employees that we have, we kept them all on during the closure. We spent a quarter of a billion dollars.

Maddox said the company’s reaction to the pandemic was an opportunity to show the world what the company wasn’t just about profitability.

Maddox said he is fearful of another closure before things turn around. But he also said Wynn has had experience addressing government mandates, citing Massachusetts’ recent curfew directive.

“We now have practice at this,” he said. “It would be hard, it would be tough on people, but we know how to do it and we’re preparing for the worst and hoping that we just kind of get through it. I really think by the summer — which feels like a long time away, but it’s not — we’ll be back. Conventions will be back. The vaccine will be rolling out, testing will be widespread and people will be ready to be back with other people. I think we’ll start feeling that momentum in Februaryish, March, coming out of the winter. Between now and then, it’s a bucking bronco.”

Maddox said he got an early look at how bad things were going to be thanks to his experiences in Macao, a special administrative region of China south of Wuhan, the Chinese city in which the coronavirus pandemic originated.

“This pandemic, I had a little head start on it because a lot of our business is in China. I actually lived in Hong Kong during SARS (severe acute respiratory syndrome), which was a very localized epidemic that was horrible in 2002,” he said.

“When I started talking to my colleagues in Macao about what was going on in China in December and the U.S. thought this wasn’t our issue, the fear in their voices was significantly more than it was during SARS. A lot of employees from Wuhan and their family members were dying nonstop, and I thought, ‘I better get ahead of this,’ because I lived through SARS and this ain’t SARS.”

The company’s efforts to understand Macao led to the company developing plans to partner with University Medical Center for a testing laboratory, the first of its kind for an entertainment company. The lab, to be completed in about a month, will provide diagnostic testing that can process between 6,000 and 8,000 COVID-19 tests in six hours.